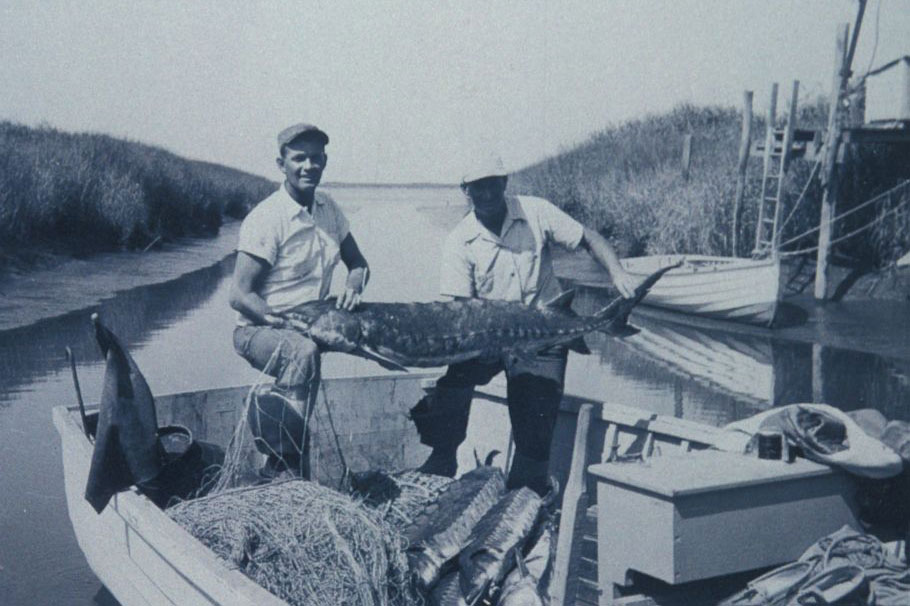 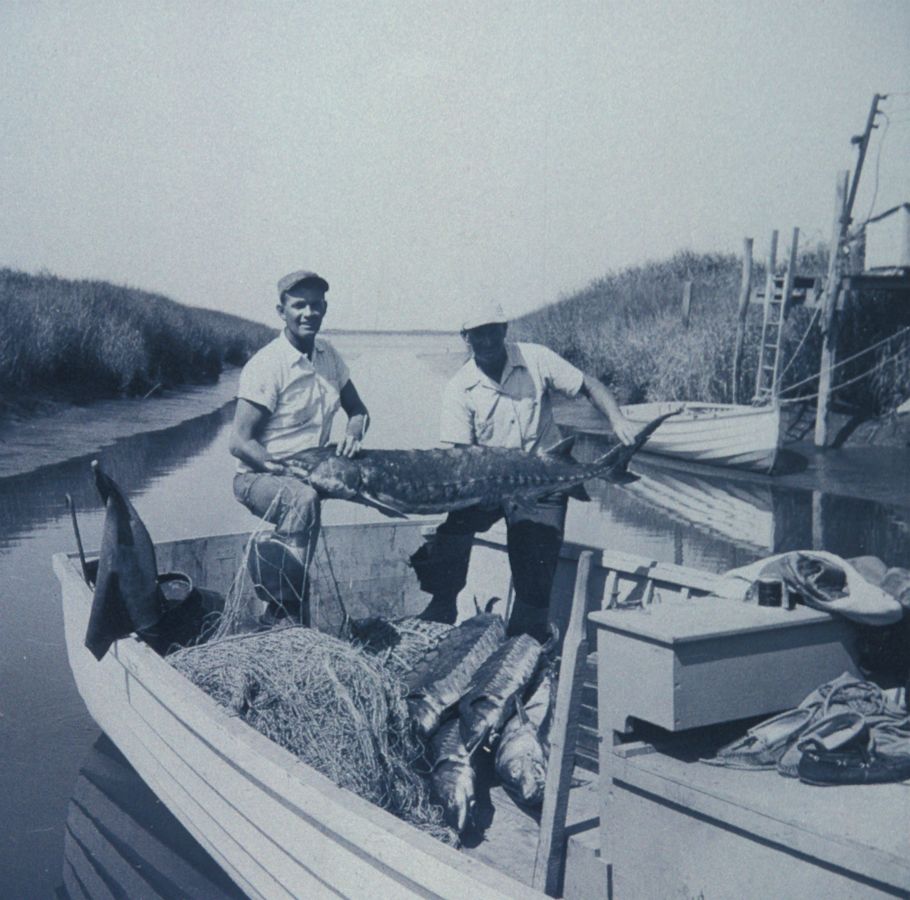 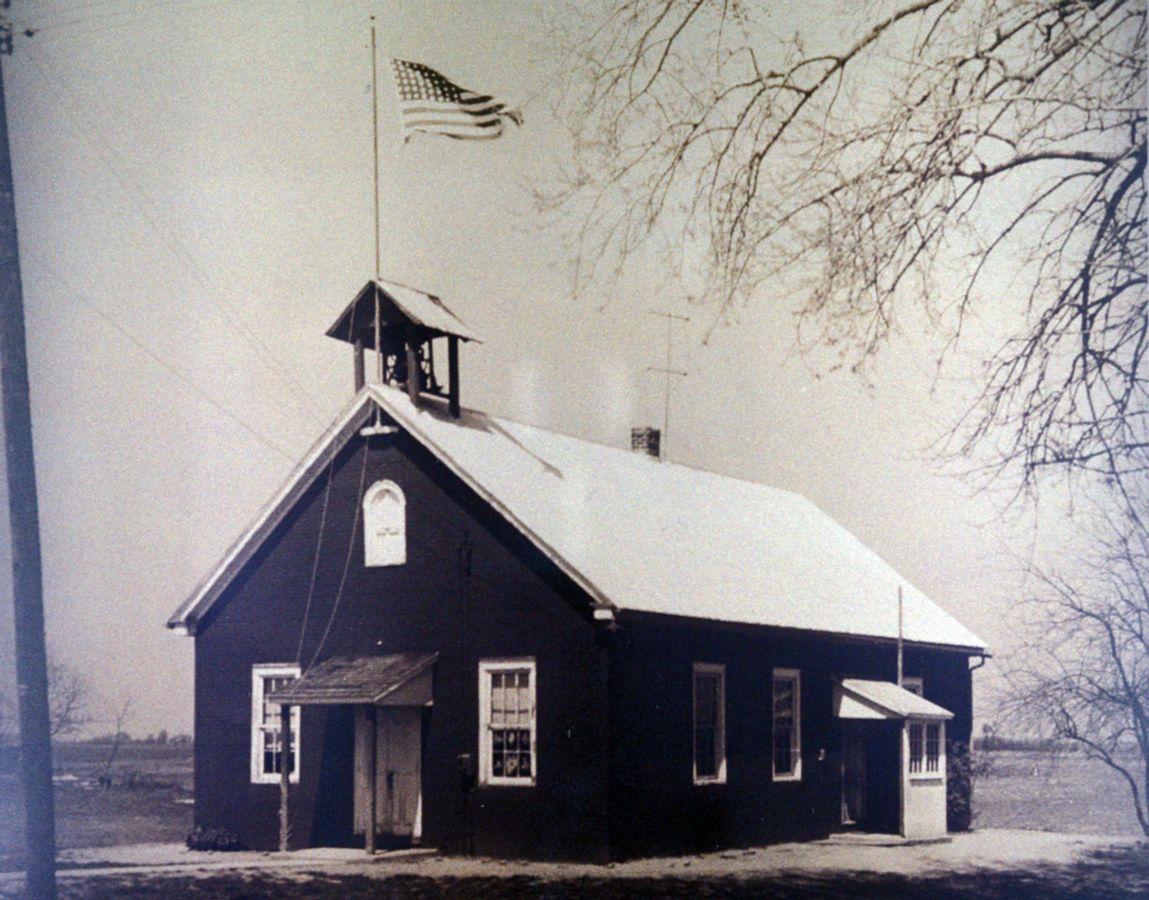 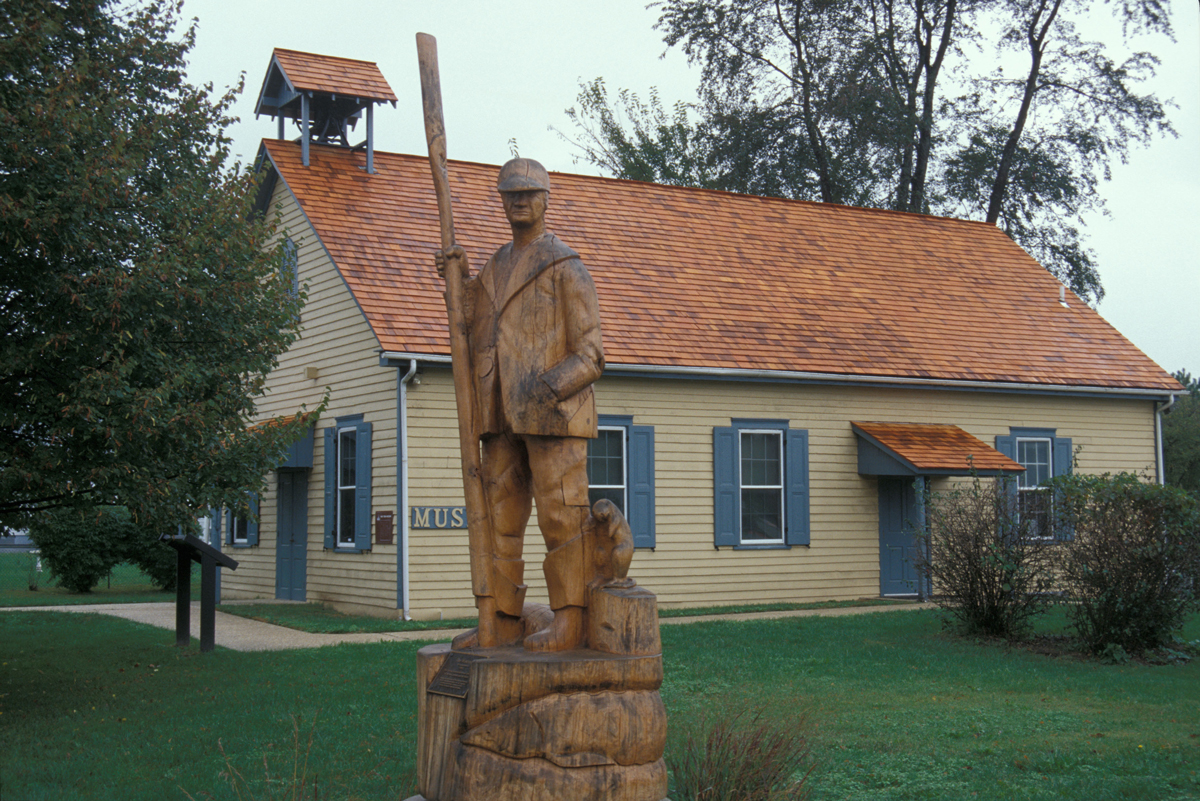 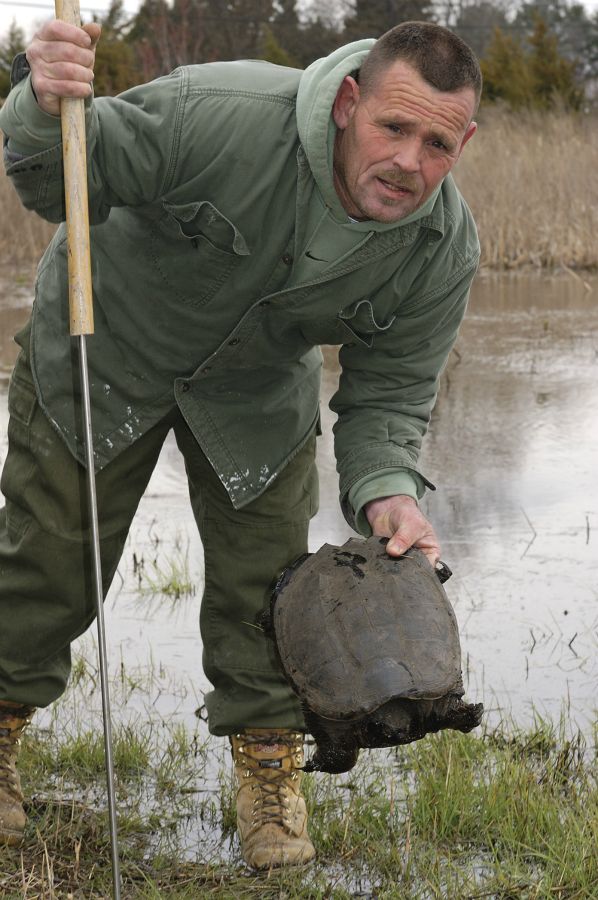 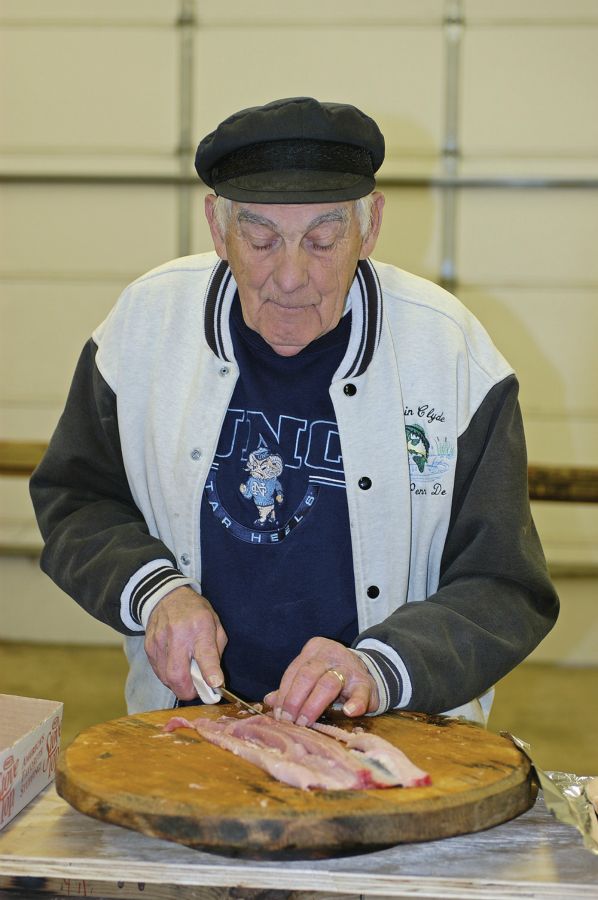 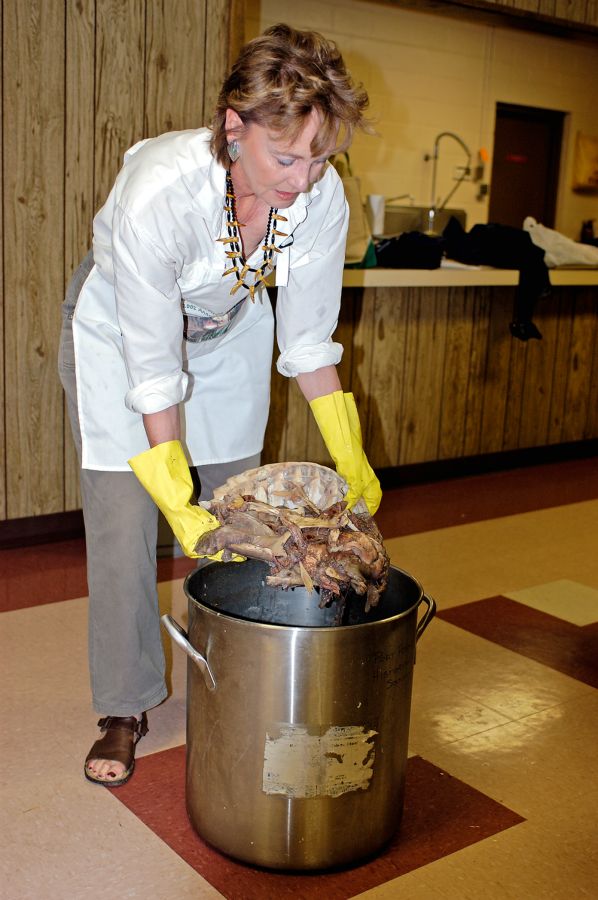 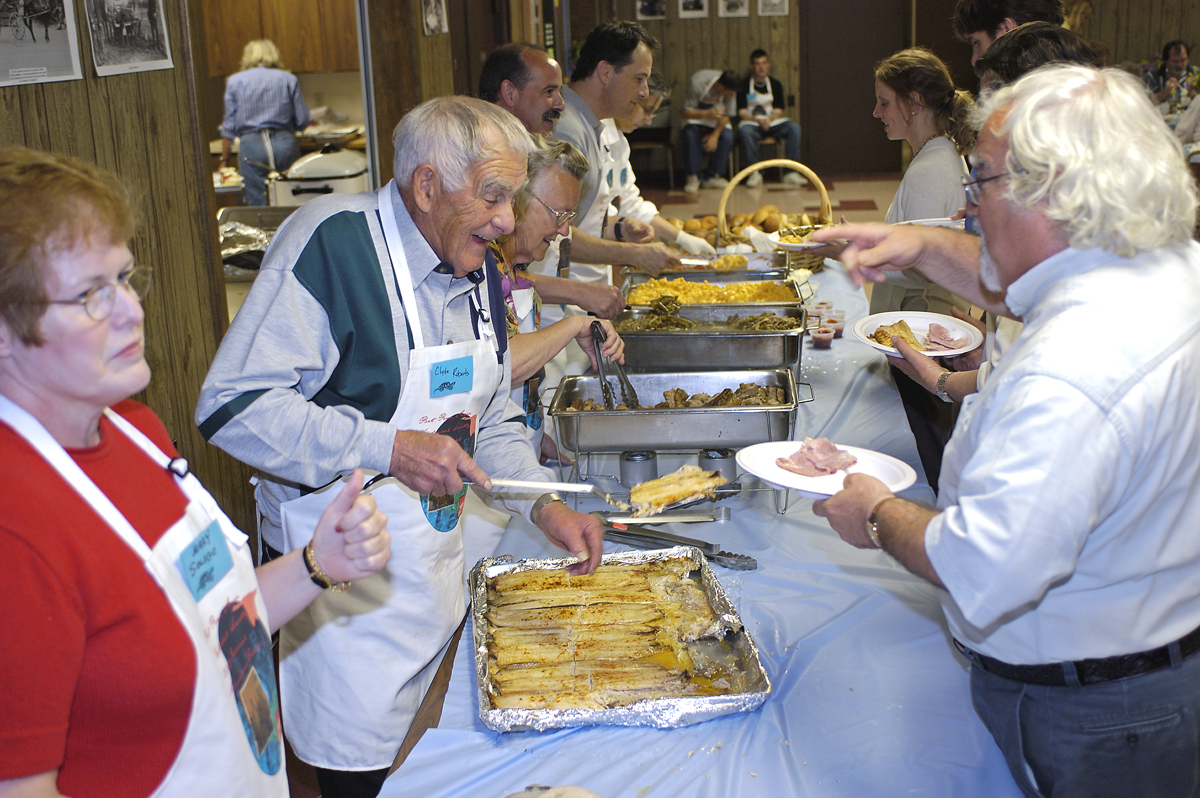 Fishermen on the Delaware River circa 1960 with a catch of Atlantic sturgeon.
The Port Penn Schoolhouse, circa 1950.
Today the schoolhouse is the town museum. A statue commemorating fishing and trapping traditions stands outside.
Victor Bryson shows how he catches snapping turtles for the annual Port Penn Marshland Dinner with a handmade progging tool (long, metal-tipped pole with a hooked end to probe the mud for turtles).
Clyde Roberts debones a shad.
Linda Beck pulls a snapping turtle out of a pot. Volunteers will pick off the meat for the snapping turtle soup served at the dinner.
Clyde Roberts serves shad at the annual Port Penn Marshland Dinner.

Midway through Delaware's Coastal Greenway, a state-administered corridor that connects natural and cultural sites, the Delaware River and Bay meet. The people who settled in this marshy area once made their living from a seasonal cycle of farming, fishing, and hunting and trapping. Today, the small village of Port Penn struggles to hold onto some of this heritage.

Founded in 1763, Port Penn developed as a harbor town. By the early 1800s, it had become a locally important port for grain and other regional agricultural products. Shipping declined after the port was bypassed first by the Chesapeake and Delaware Canal, which opened in 1829, and later by the Delaware Railroad in 1858.

But by the 1880s, the area had been revitalized as a summer destination for urban dwellers, offering "fine fishing and good bathing." Camp meeting grounds and summer colonies flourished until the devastating hurricane of 1933 and the Depression. By the mid-20th century, overfishing, erosion, and nearby industrialization threatened to put an end to traditional water-based activities like fishing and trapping. Port Penn's population dwindled, but a number of significant historic buildings remained. In an effort to preserve the village's history, Port Penn was named to the National Register of Historic Places in 1978.

Today, Tuckerton is experiencing great changes. Fiberglass replaced wood in boats, shifting builders' work from design and fabrication to maintenance and storage. Duck and bird enthusiasts collect decoys instead of hunting with them. Houseboats have become small museums or offices for family businesses.

In the mid-1970s, the Port Penn Area Historical Society organized a fund-raising dinner to help create a village museum. The Port Penn Marshland Dinner has become an institution. Held in early May, it features seasonal fare once common in Port Penn and other Mid-Atlantic coastal areas: shad, shad roe, and snapping-turtle soup. Preparations for the dinner depend on the traditional skills of long-time Port Penn residents like Clyde Roberts and Victor Bryson. Roberts debones the shad, rendering the fish a delight instead of a trial for diners. Bryson catches, kills, and cleans the dozen or so snapping turtles required for the soup. Home-cooked vegetables and home-baked breads and desserts round out the menu, which is served to over 200 eager diners.

Linda Beck's husband Bob Beck thought up the dinner and the museum, which is housed in the village's former schoolhouse. As Linda says, "The Marshland Dinner is a way for the community to come together and share our culture and traditions with other people. The museum tells the story of generations of Port Penners . . . and their connection with the land, the cycles of nature, the weather and the tides."