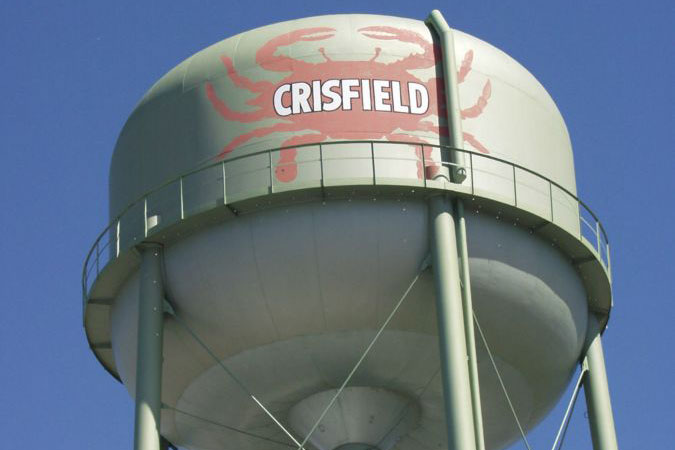 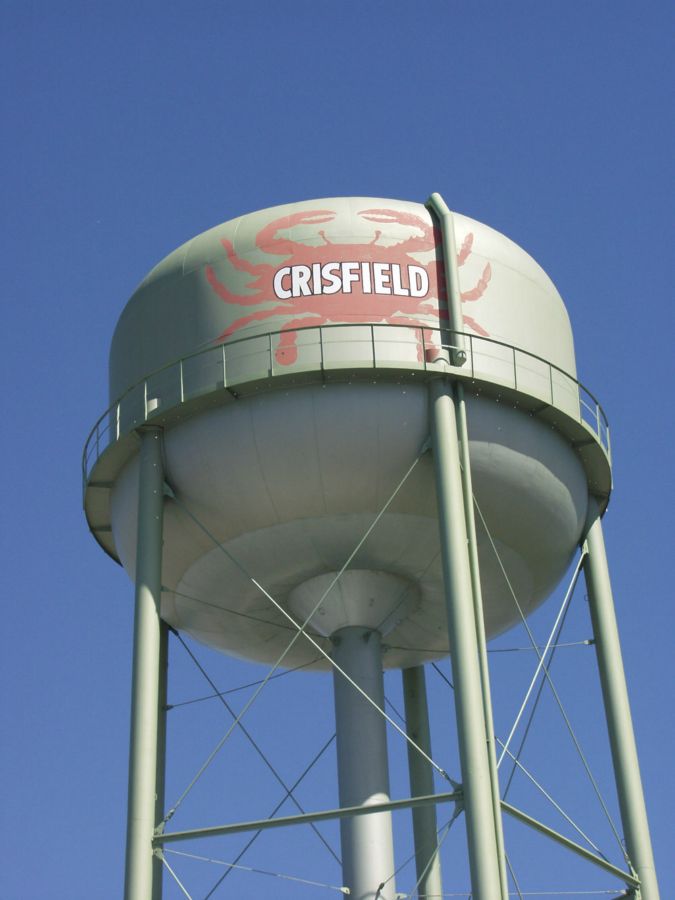 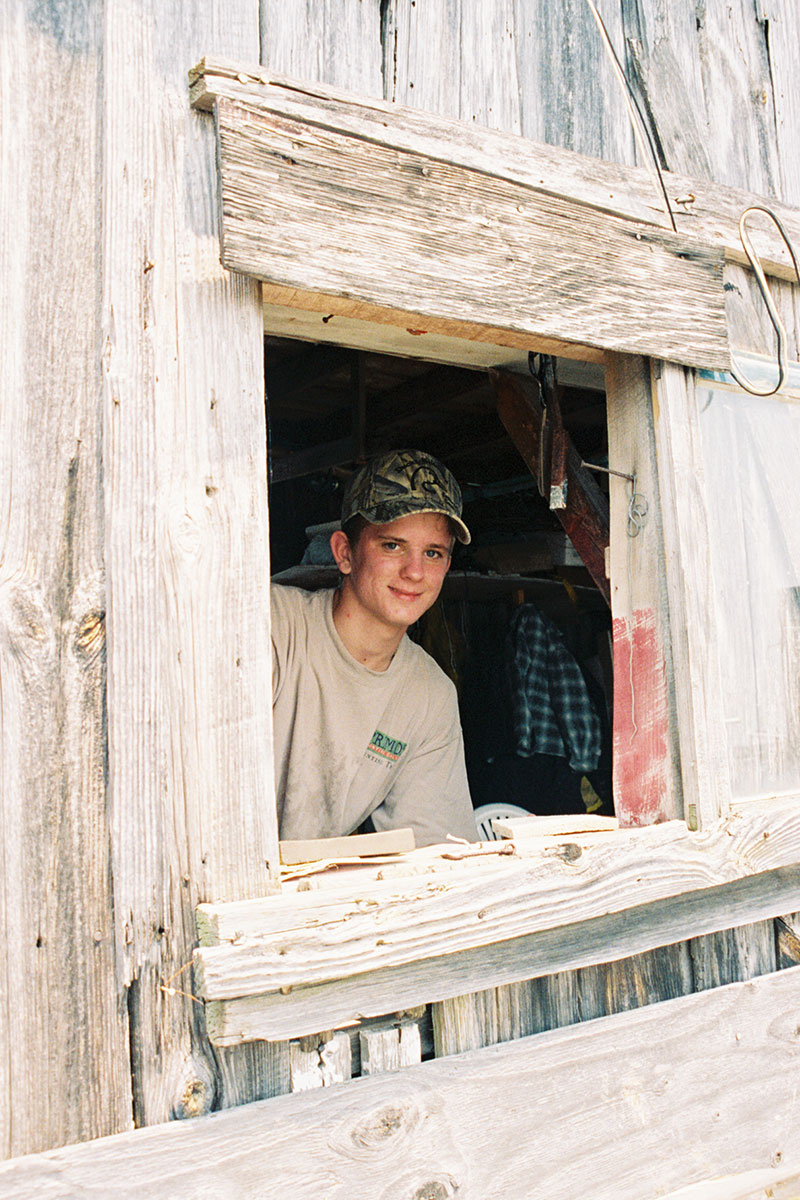 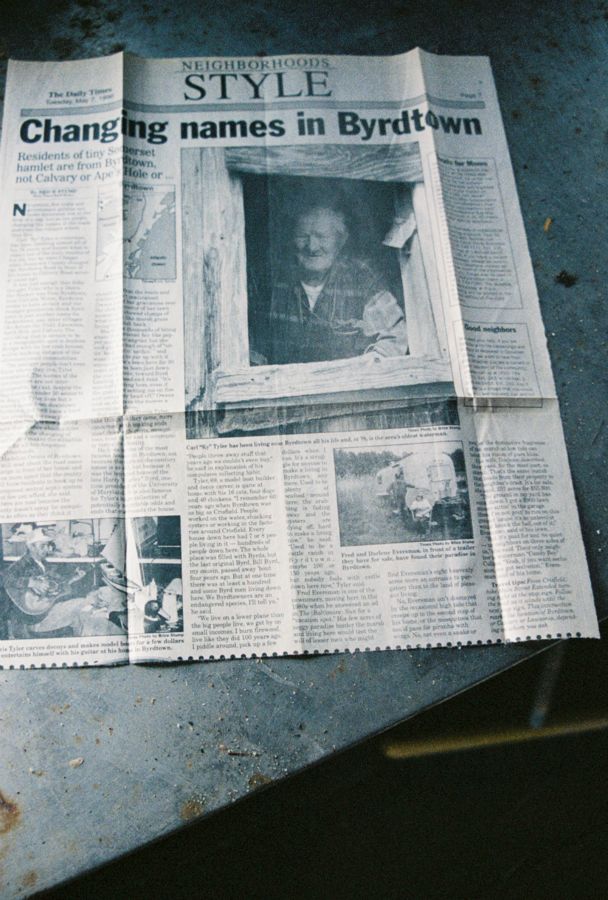 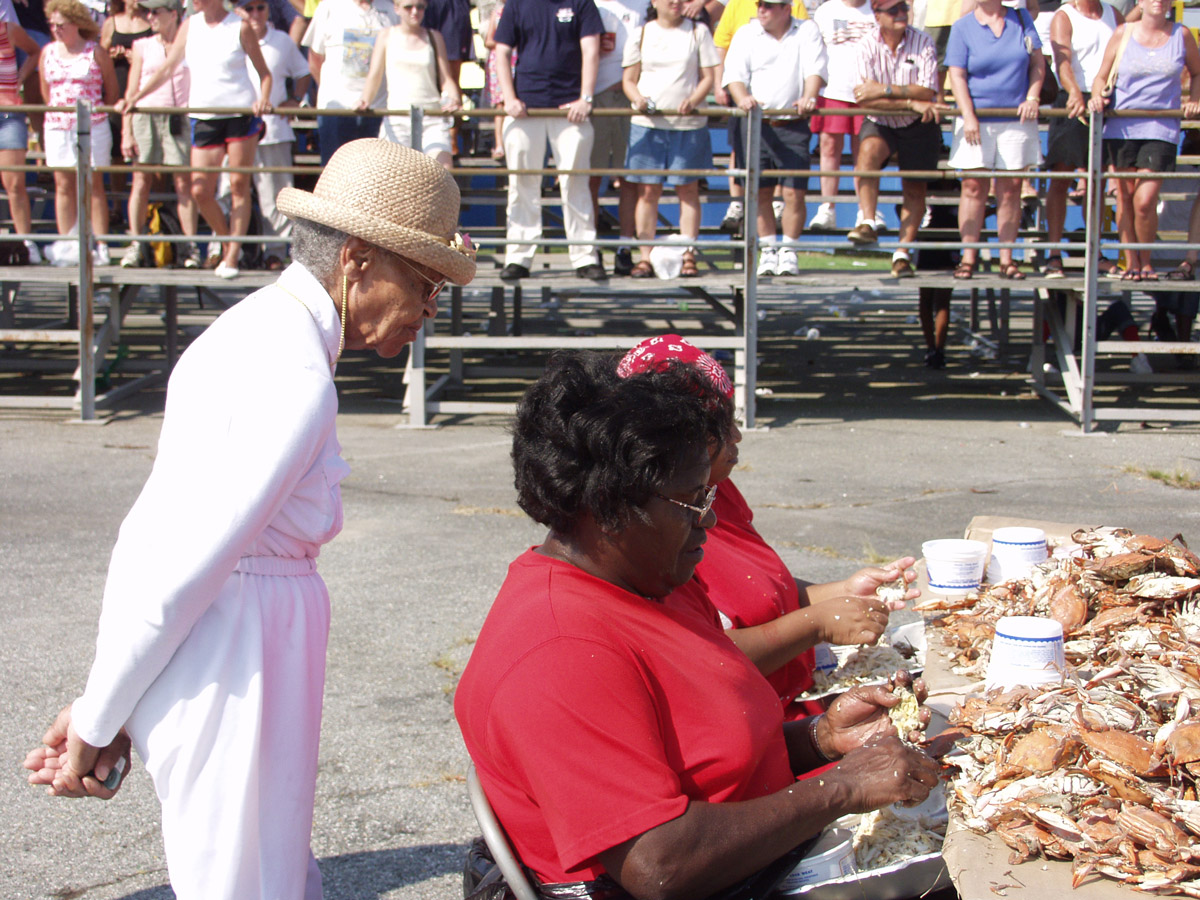 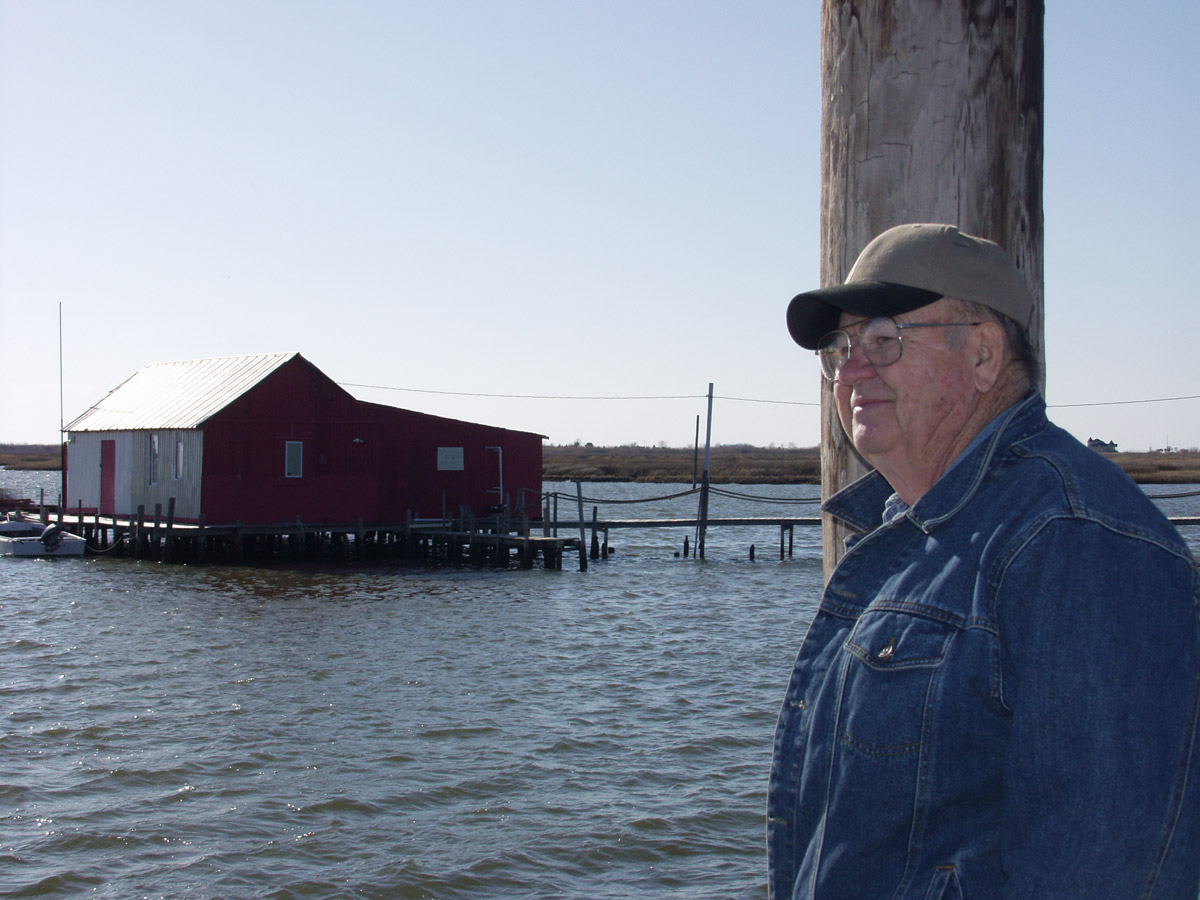 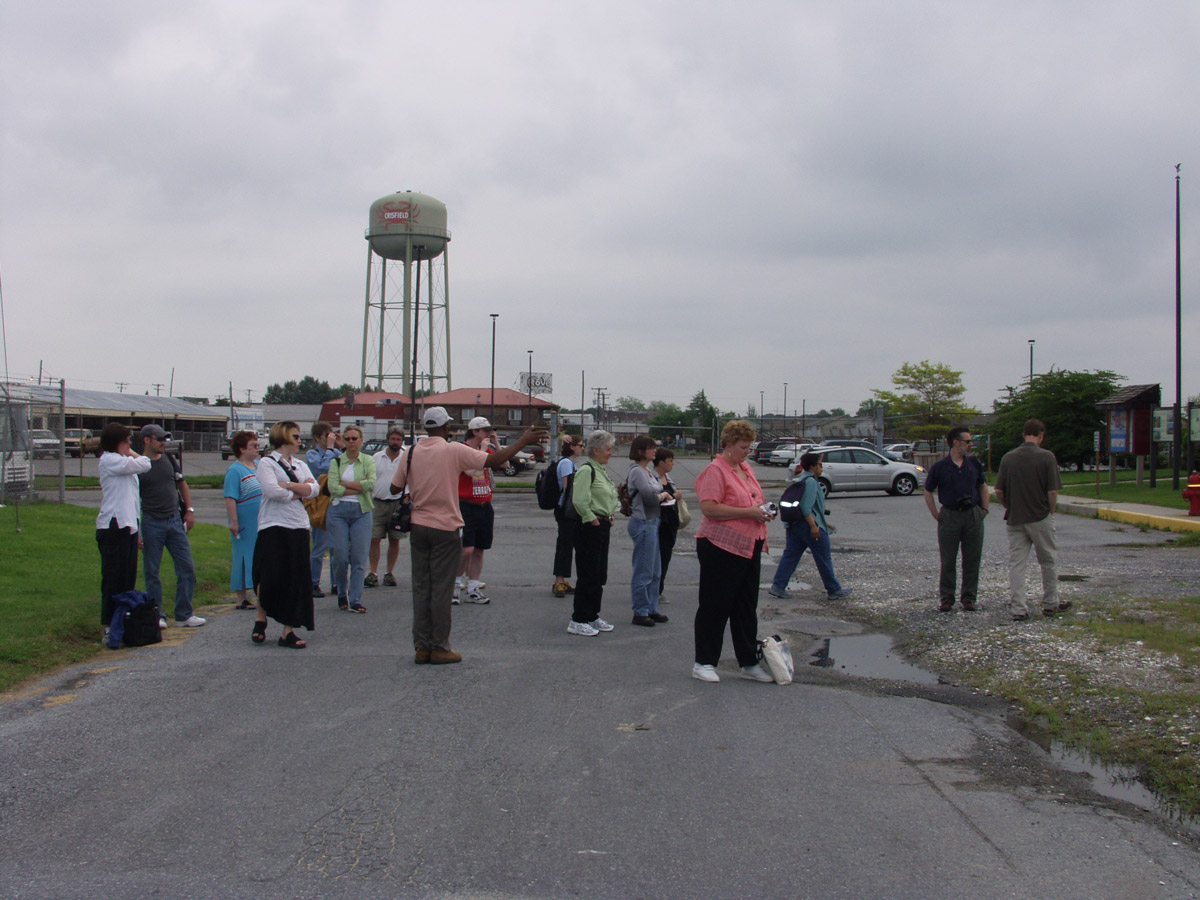 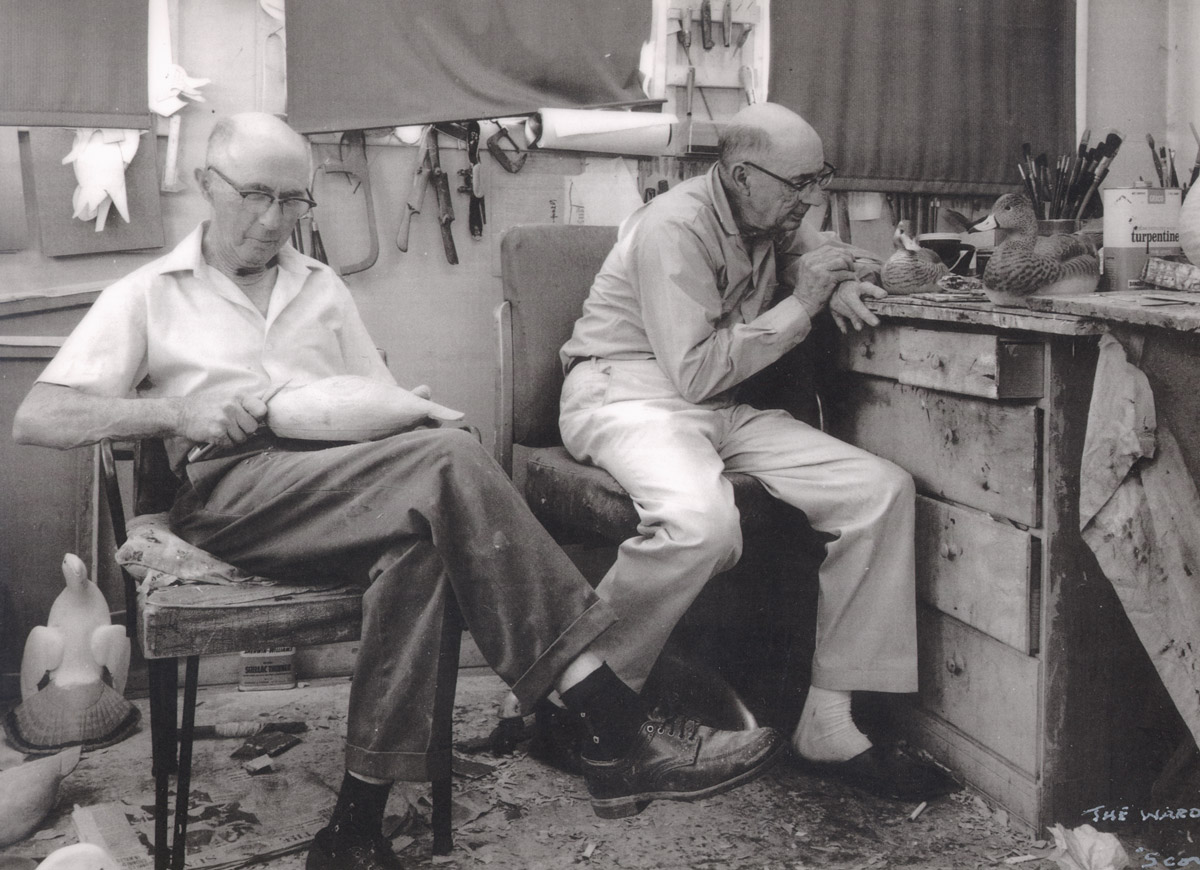 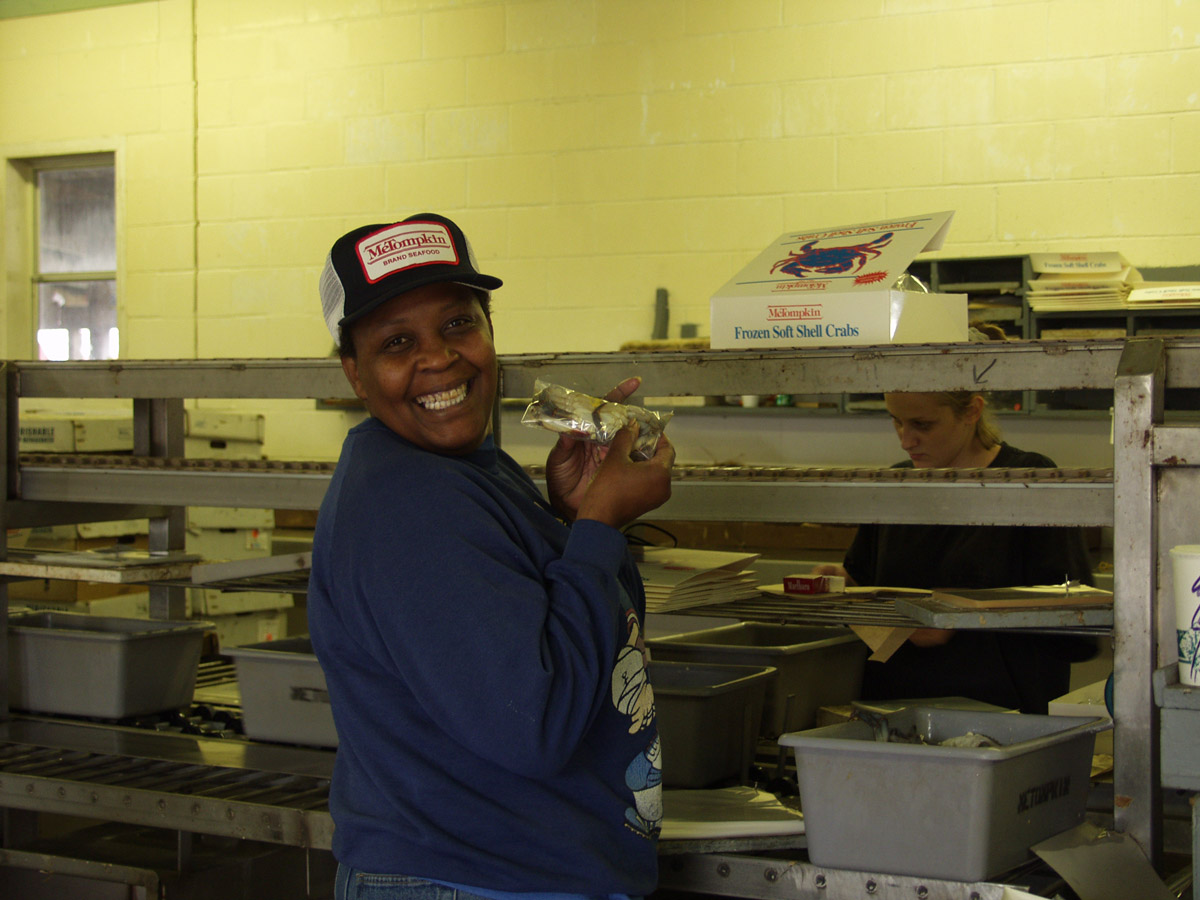 Crisfield’s town water tower sports a giant crab.
Carl Tyler, 16, looks out of the family shanty on Jenkins Creek.
Carl's late grandfather, ''Ki'' Tyler, shown here in the same pose, was a legendary waterman of the region who learned and passed his skills through the family.
Ms. Aimes, 87 years old, observes Joyce Fitchett and Romaine Henderson as they pick crabs. Aimes has picked crab for 71 years and is an honored judge at the National Hard Crab Derby Picking Contest.
Eleventh-generation waterman Hon Lawson stands outside the shanty where he worked with his father. Now retired, Hon has gotten off the water and passes his knowledge of maritime traditions to others through workshops, seminars, and lectures.
James Lane leads the 2003 Folklife Field School on a walking tour of downtown Crisfield, including packing houses, docks, and processing areas.
Crisfield is the hometown of legendary decoy carvers Lem (right) and Steve (left) Ward. The Ward Brothers are noted for their vision and artistry, which is captured in the working decoys and decorative carvings they created in their workshop.
Inside MeTompkin Seafood, a worker shows off a finished, wrapped, and cleaned softshell crab prepared for sale to market.

The first wave of prosperity in Crisfield, Maryland, came from the oyster. Most of the city's current downtown, in fact, was built on the millions of oyster shells accumulated during the oyster boom, which began in the 1860s when John Wood Crisfield succeeded in bringing a railroad line to the city.

Crabs now seem to be everywhere on the Lower Eastern Shore of the Chesapeake Bay, south of the Choptank River. Restaurants and seafood markets, local festivals, and even sports teams have the crab as their symbol, and a trip here would not be complete without a messy but delicious feast of a dozen or two of Maryland's "state crustaceans," spiced and steamed.

Crisfield, the southernmost city in Maryland, is the self-proclaimed "Crab Capital of the World." In the summer of 2003, student researchers attending the Folklife Field School sponsored by the Library of Congress' American Folklife Center and Salisbury University learned why when they interviewed Crisfield residents like 11th-generation waterman Wayne "Hon" Lawson, crab-picking champion "Hurricane" Hazel Cropper, and seafood packing house co-owner Casey Todd. In the 1920s when the oyster supply began to falter, blue crabs took over as the seafood cash crop of the area. With today's reduced crab catches in the Bay, many Crisfield residents have turned crabbing into cultural tourism to bring visitors to their city. MeTompkin Seafood, one of the few remaining packing houses in the city, offers walking tours to visitors. During interviews with Valerie Mason of the Crisfield Chamber of Commerce and Ginni Lehman, Miss Crustacean 2002, Field School students also heard about the annual Hard Crab Derby, a festival held every Labor Day weekend that draws 10,000 visitors to the city to attend crab races, a crab-picking contest, and crabbing work boat races.