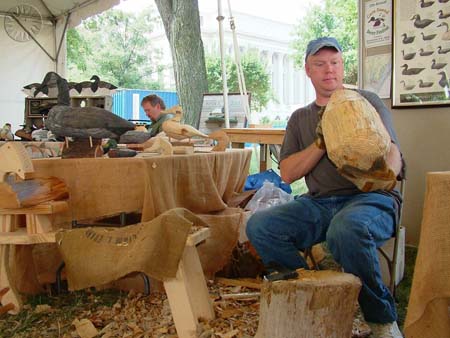 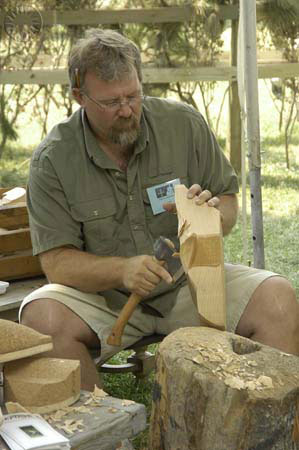 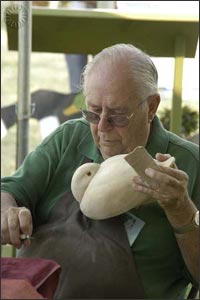 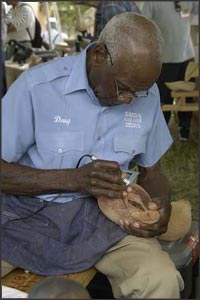 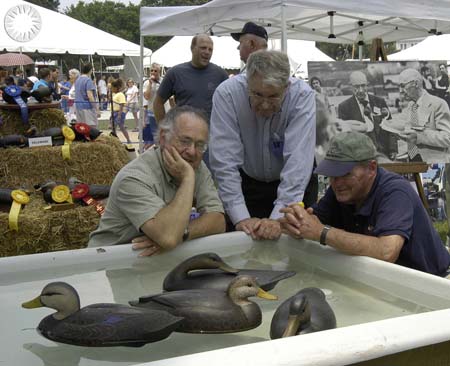 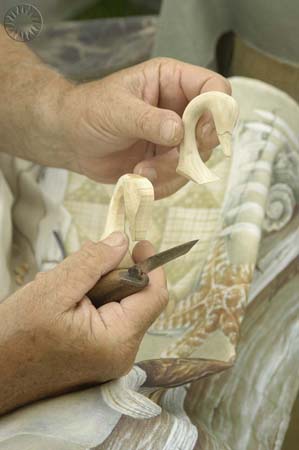 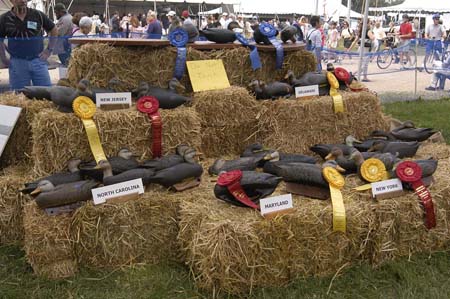 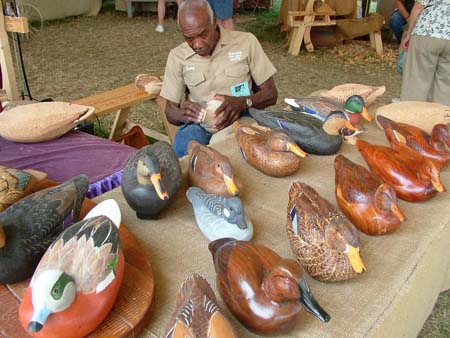 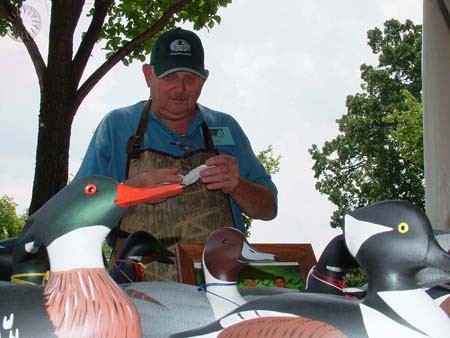 Anthony Brooks, from Harkers Island, North Carolina, carves decoys “the old-fashioned way” with hand tools. He often demonstrates at Core Sound Waterfowl Museum events.
Arthur Leonard of Chincoteague, on Virginia’s Eastern Shore.
Ron Rue, a decoy carver from Cambridge, Maryland, carves in the distinctive Southern Chesapeake Bay style of the late Ward Brothers. Ron is also a teller of hunting tales, and teaches carving.
Doug Gibson, a Milville, Delaware carver, has demonstrated at the Havre de Grace Decoy Museum in Maryland, and serves as a decoy carving contest judge. He is a master of the wood-burning technique of decorating decoys.
Judges at the Mid-Atlantic Decoy Carving Competition staged at the 2004 Smithsonian Folklife Festival. Contestants from all six of the featured states (NY, NJ, DE, VA, NC) sent their best examples of black ducks for this competition, which featured working (not strictly decorative) decoys.
Miniature goose decoy heads carved by Jack Combs, who grew up on the Great South Bay of Long Island, New York. The son and grandson of local “baymen,” gunners and waterfowl guides, he left the bay to work on tugboats; after retiring took up carving, which had also been done by his father and grandfather. He uses no power tools in his work.
Black duck decoys entered into the Mid-Atlantic Decoy Carving Competition. First place went to Kelley Nelson of North Carolina, who was also a featured carver at the Festival program.
Doug Gibson, Delaware, with a variety of his carved decoys.
Fred Reitmeyer, from Tuckerton, on the Jersey Shore, demonstrates often at Tuckerton Seaport, and also builds model “sneakboxes” (a New Jersey duck hunting boat made of cedar).

Waterfowl hunting and decoy carving have long histories in the Mid-Atlantic. Native Americans made waterfowl replicas out of reeds to lure ducks and geese that they then caught with nets. Early European immigrants supplemented their family diets and incomes by hunting the plentiful migrating birds. By the mid-19th century, railroad transportation made it possible for hunters from formerly remote communities to ship large quantities of waterfowl to Mid-Atlantic cities. Tools of the trade were utilitarian: decoys were rough-hewn, and ingenious low-lying boats, like the New Jersey "sneak box," were built to silently float up to flocks on the water. Huge guns, sometimes called "widow makers" for their dangerous recoil, could shoot eighty ducks at a time. 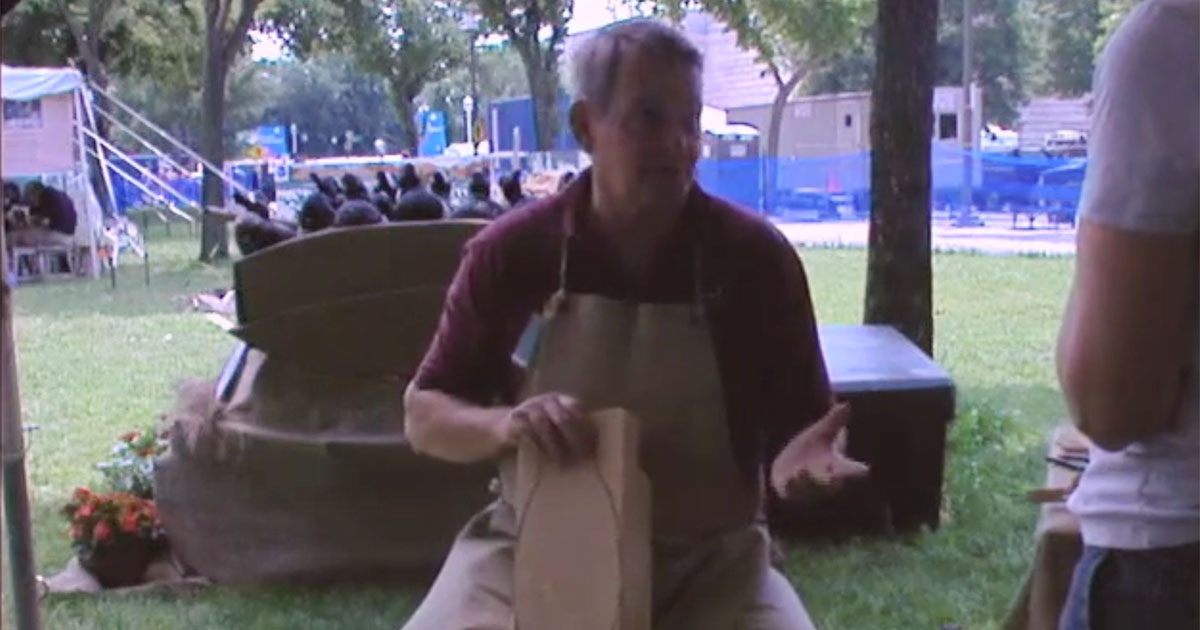 Severe depletion of waterfowl led to the Migratory Bird Treaty of 1918, banning the sale of game birds. Former market hunters continued to hunt for their own pleasure and many became guides. Reduced numbers of birds and a less utilitarian form of hunting demanded more life-like decoys. Carvers used native woods like cedar--often obtained free from local shipyards or, later, from discarded telephone poles. 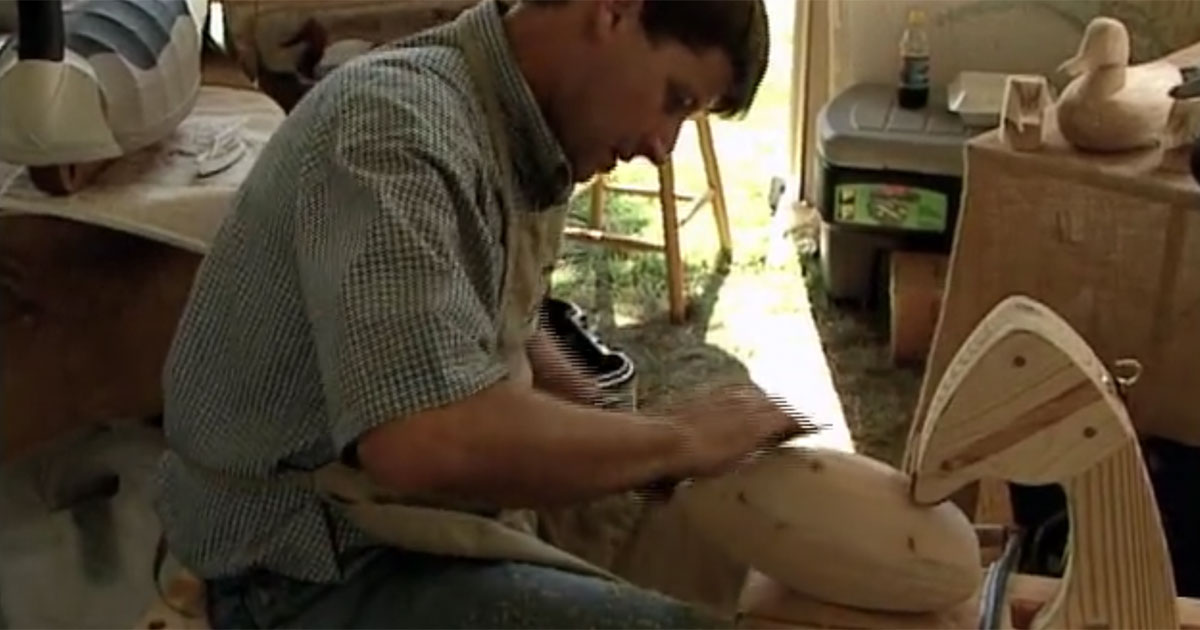 Regional carving styles developed. The head pose, feather painting or shape of a tail can distinguish a Core Sound decoy from a Chesapeake Bay, a Barnegat Bay or a Great South Bay decoy. The decoys of such carvers as the Ward Brothers of Crisfield, Maryland, have become collector's items worth thousands of dollars. Today, visitors flock to fall and spring waterfowl festivals to see and purchase decoys, and visit museums devoted to decoys including the Ward Museum in Salisbury, Maryland.