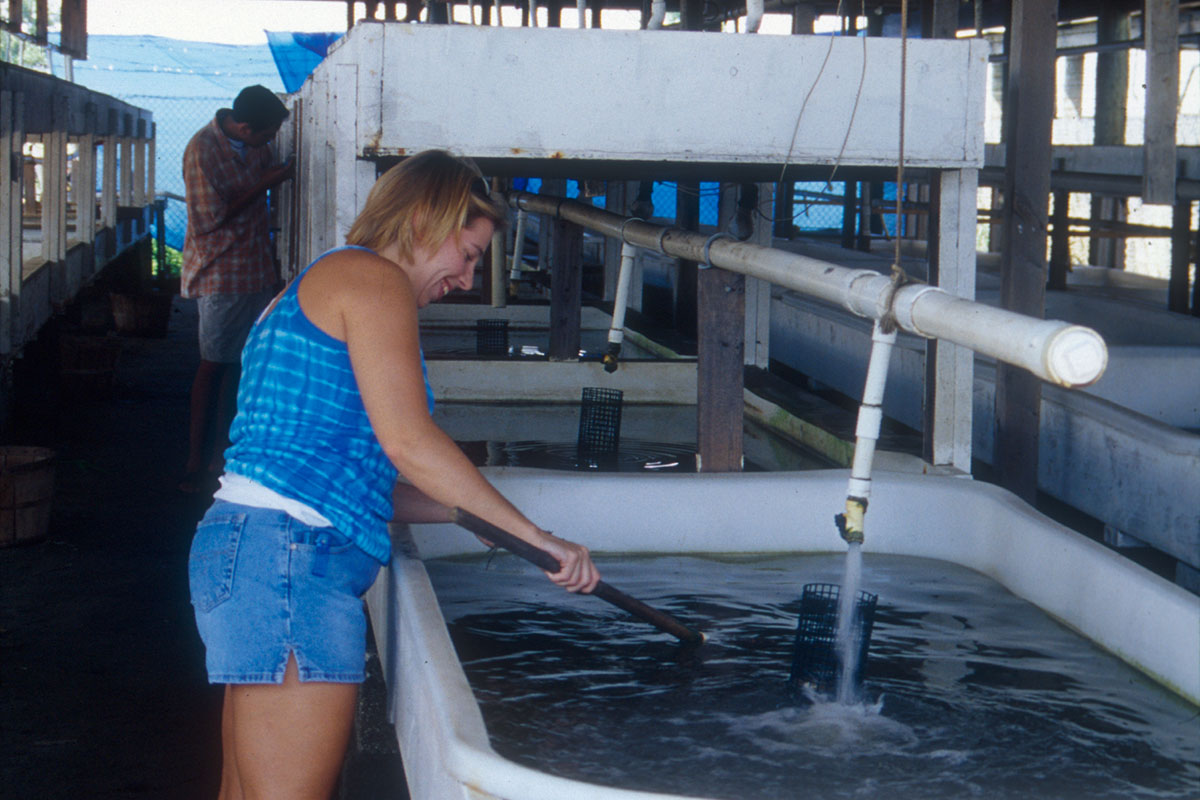 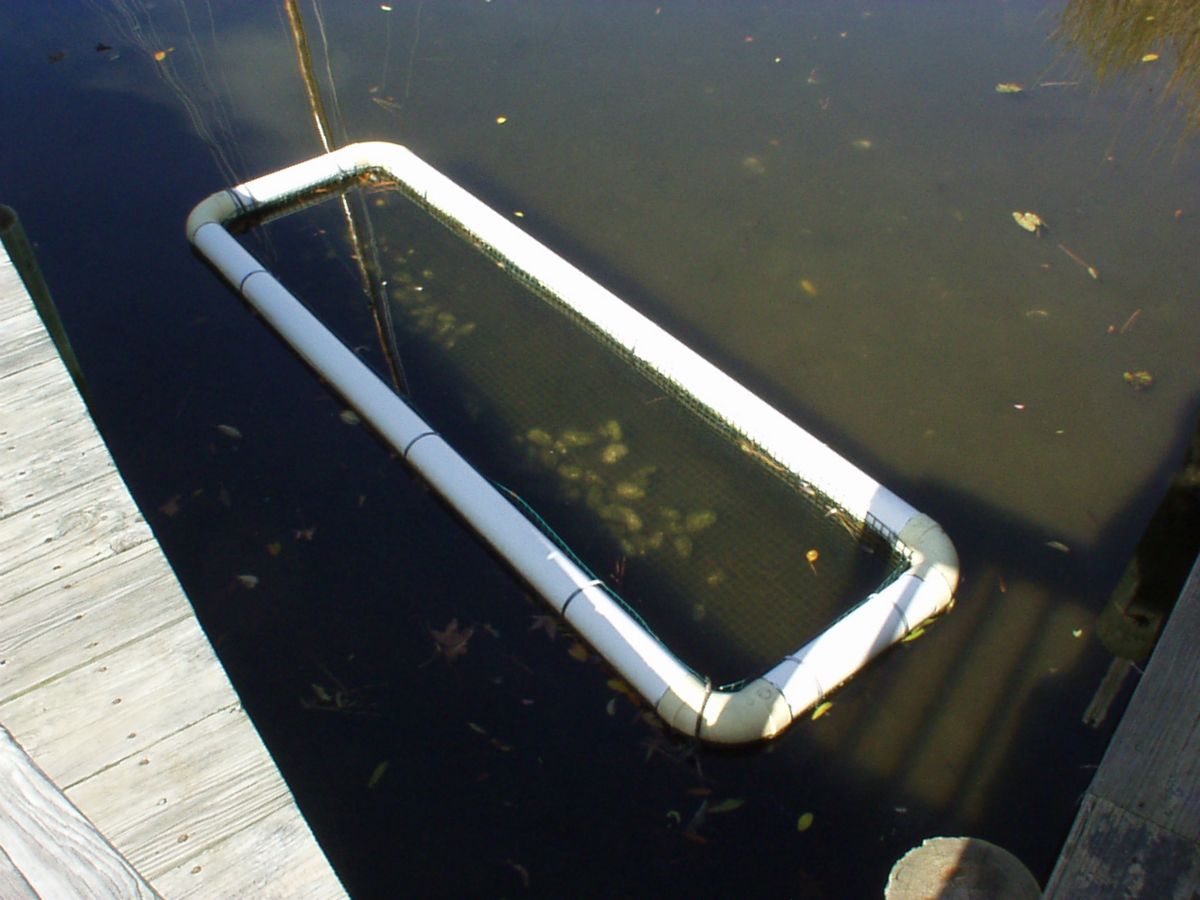 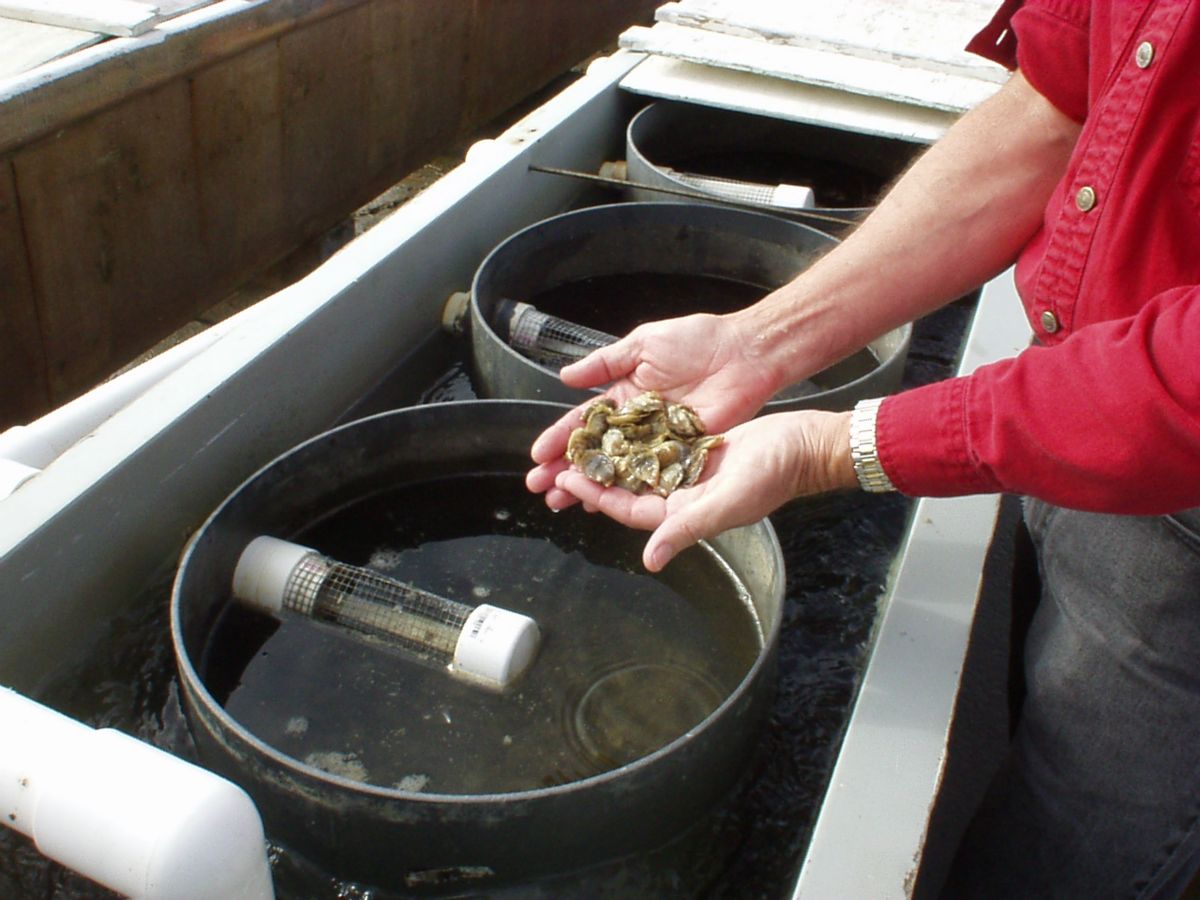 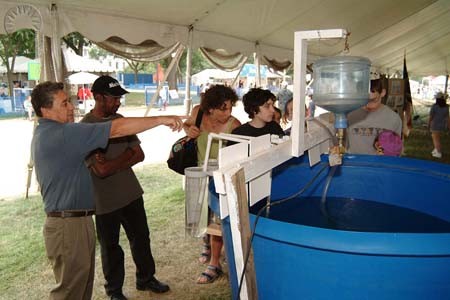 A crab float is a tank where crabs are placed to shed their shells and become “soft shell” crabs, one of the oldest forms of aquaculture in the Mid-Atlantic. This is a very time sensitive process, and the crabs are watched closely.
Crab pots (right) and a row of crab floats (left) on a Smith Island dock.
These frames, made of PVC plastic pipe, are used with a net as an “oyster garden” off many private docks in the Chesapeake Bay region.
“Baby” Eastern Oysters are raised for the Virginia Institute for Marine Science, at the Cherrystone Clam facility in Cheriton, Virginia. The Eastern Oyster is being studied as a possible supplement to native oysters which have largely succumbed to disease in the region.
Outdoor tanks at Cherrystone Clams, an aquaculture facility in Cheriton, Virginia. Clams are hatched and nurtured at the facility, and then planted in large mesh bags in protected beds in the Chesapeake Bay where they grow to marketable size.
Pamunkey Shad Hatchery worker Henry Langston “milks” a shad for eggs which will be hatched and grow in the facility, later to be released into the Pamunkey River to help replenish the stock in the Mid-Atlantic.
An informational sign describes the process of shad hatching and release at the Pamunkey Shad Hatchery in Virginia.
Chief Warren Cook of the Pamunkey Tribe explains the work of the tribe’s shad hatchery to visitors at the Smithsonian Folklife Festival.

Aquaculture is "fish farming," the practice of raising a particular species in a controlled aquatic environment. As open-water fishing in the Mid-Atlantic declines because of over-fishing, pollution, and shellfish diseases, aquaculture has become more important in research and restoration efforts and in producing fish for market.

Soft-shell crabbing is one of the oldest forms of aquaculture in the Mid-Atlantic. In places like Smith Island and Tangier Island in the Chesapeake Bay, whole families are involved in watching over blue crabs as they reach the molting stage. Soft crabs are considered a delicacy and command a higher price than hard crabs.

Clam aquaculture on the Eastern Shore of Virginia has become a multimillion-dollar industry. Clam hatcheries resemble movie-set laboratories with bubbling vats full of baby-clam food. Home "gardening" of oysters is growing in popularity, with several companies selling waterfront home owners the equipment to raise oysters for the table.

Until recently, blue crabs have not been successfully hatched and raised in captivity. Scientists at the University of Maryland's Center of Marine Biology have made breakthroughs and are hopeful that their efforts can help replenish the declining stocks of crabs in the Chesapeake Bay.