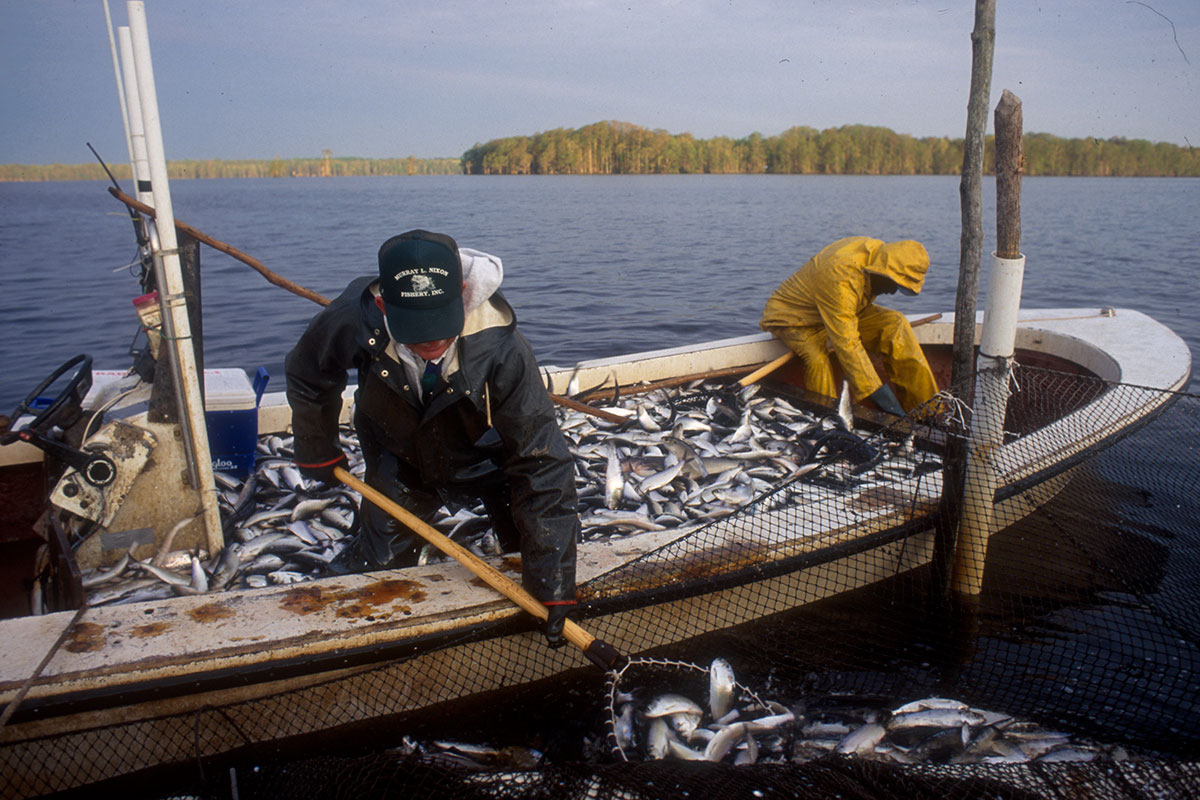 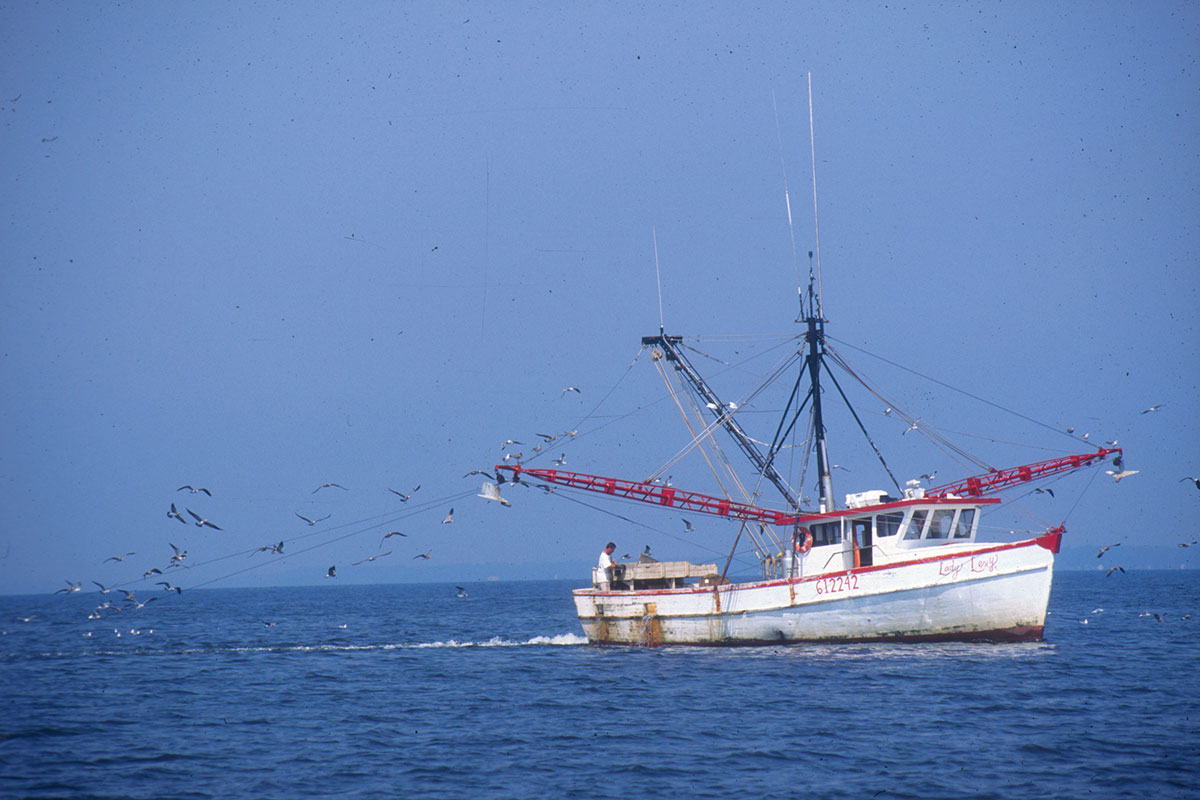 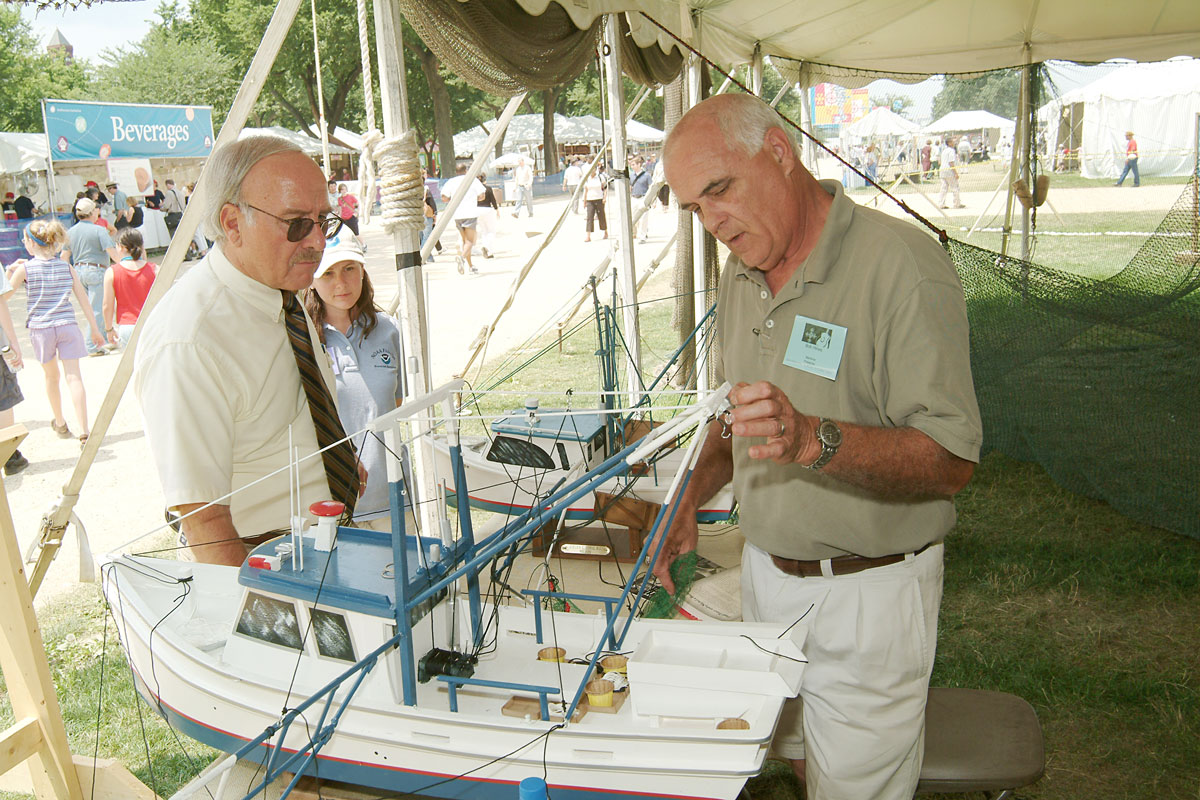 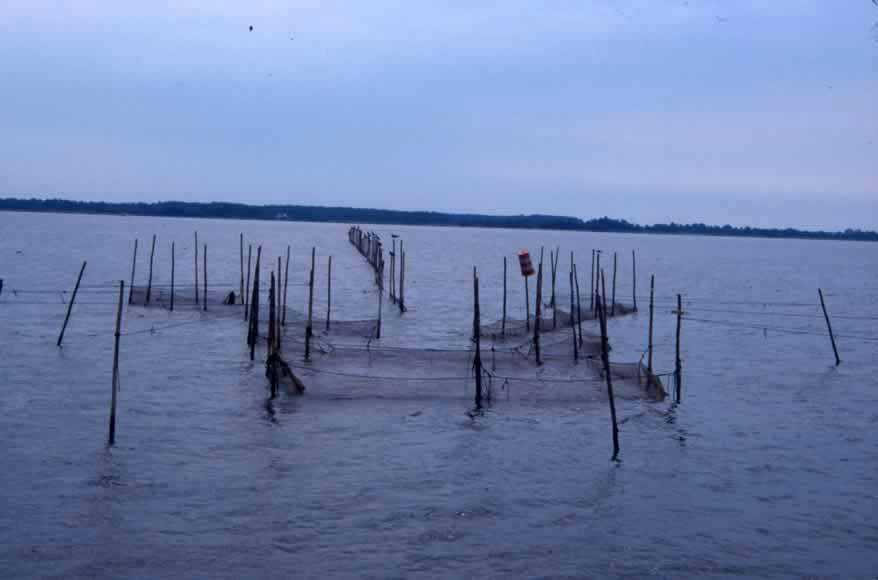 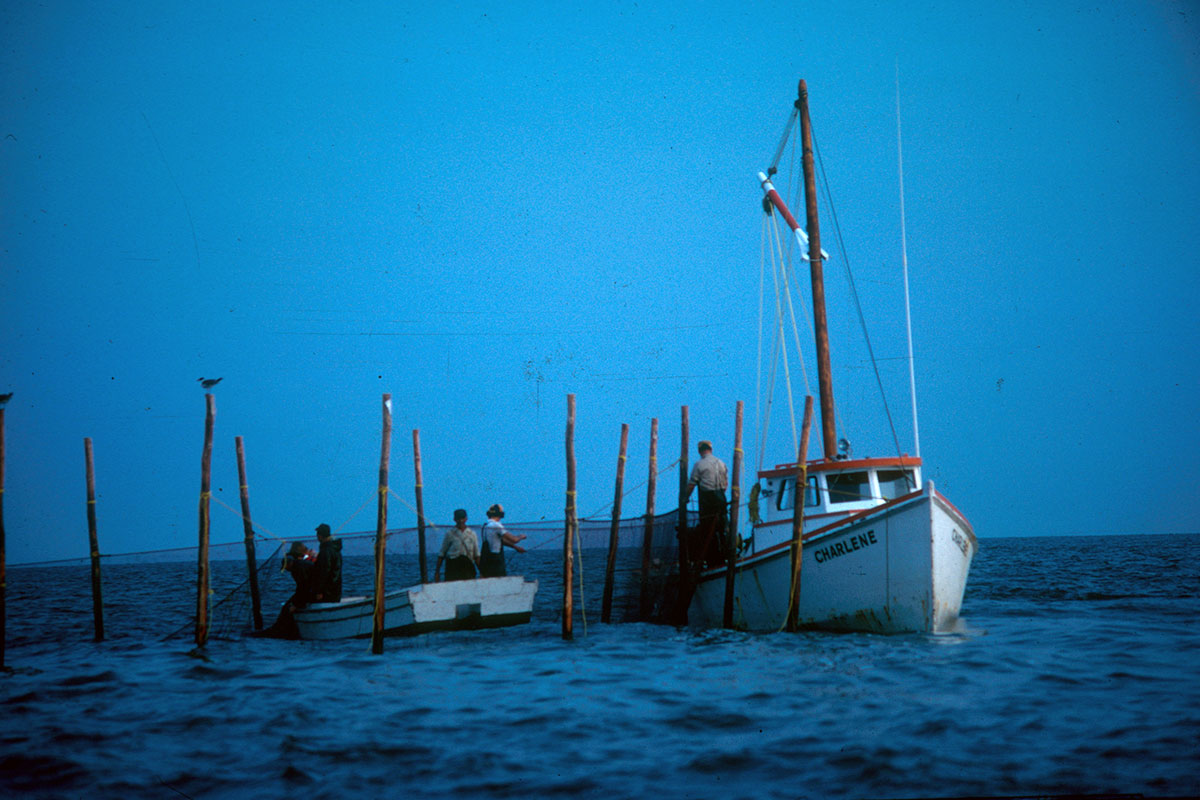 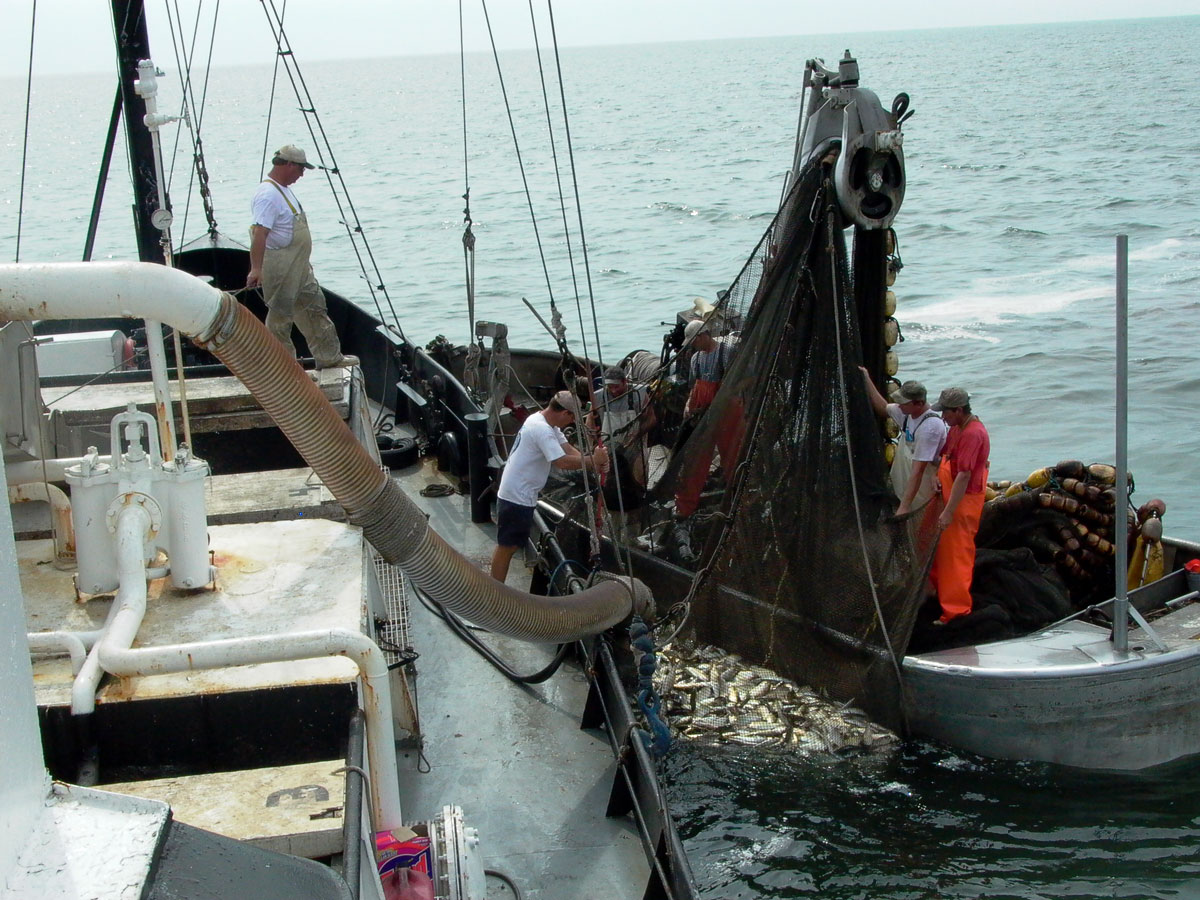 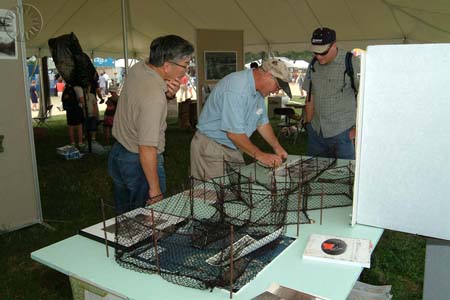 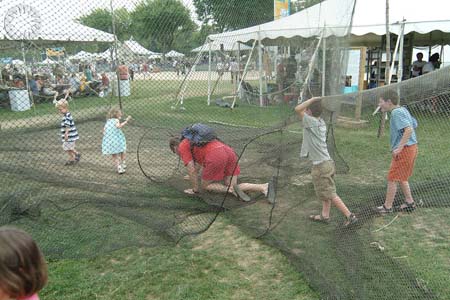 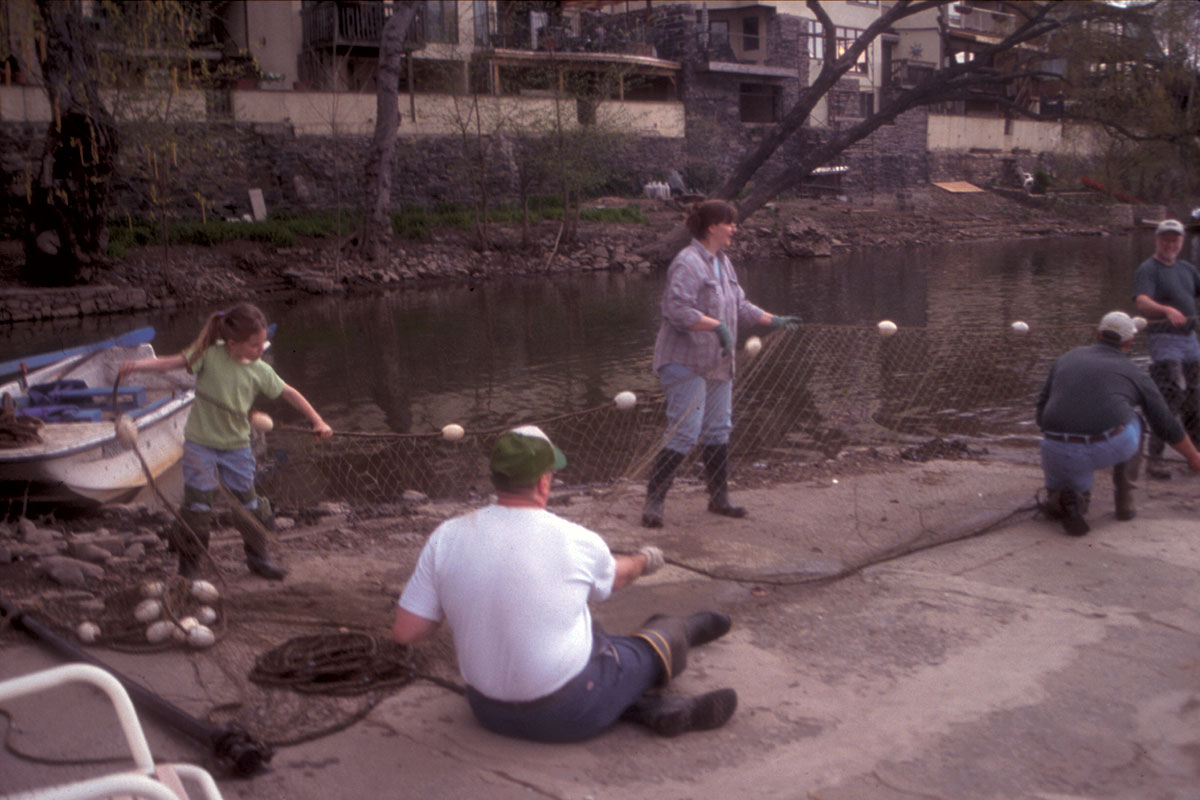 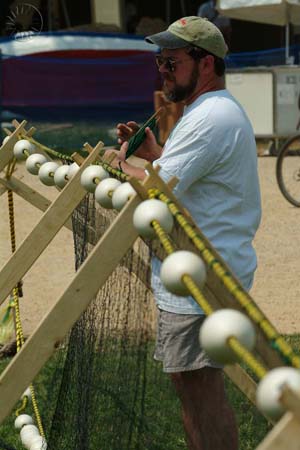 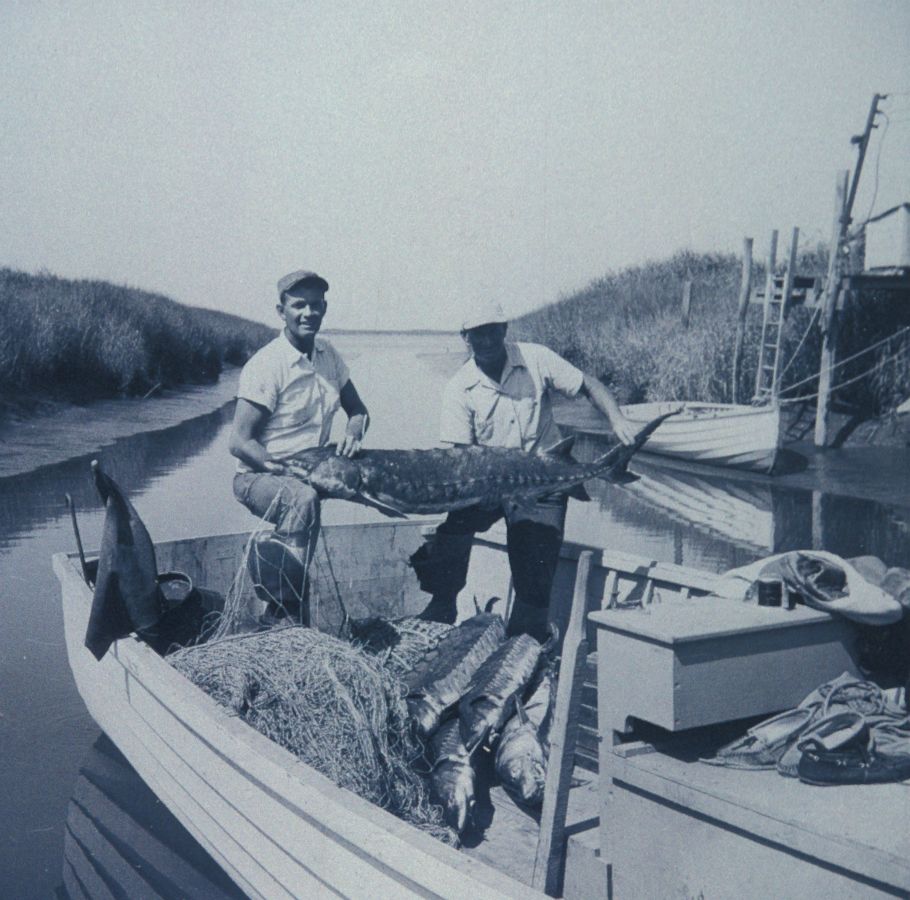 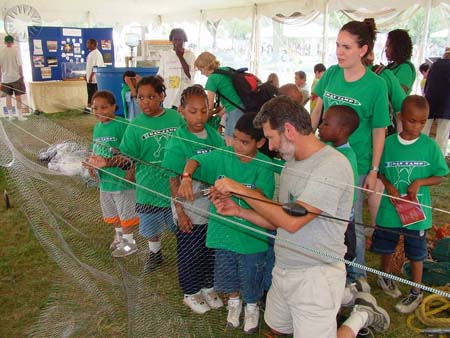 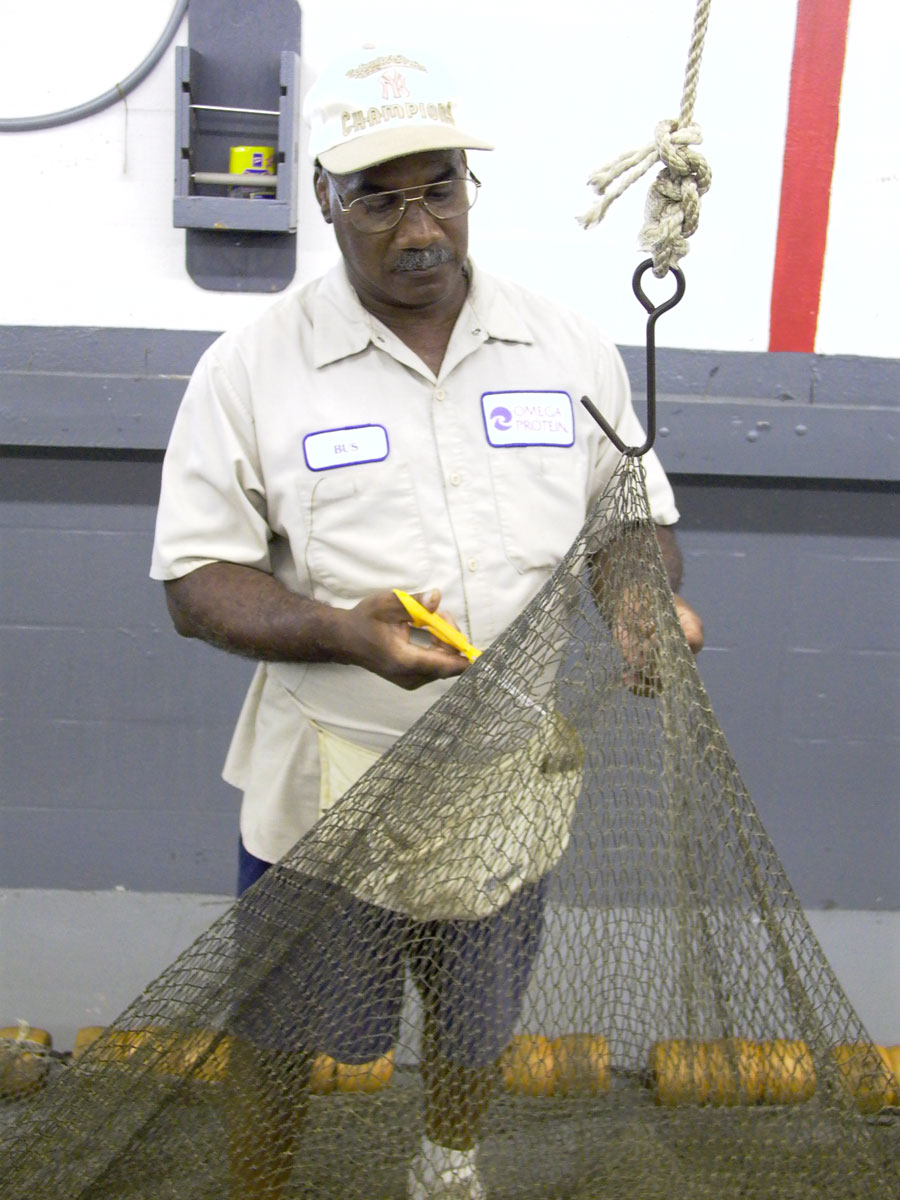 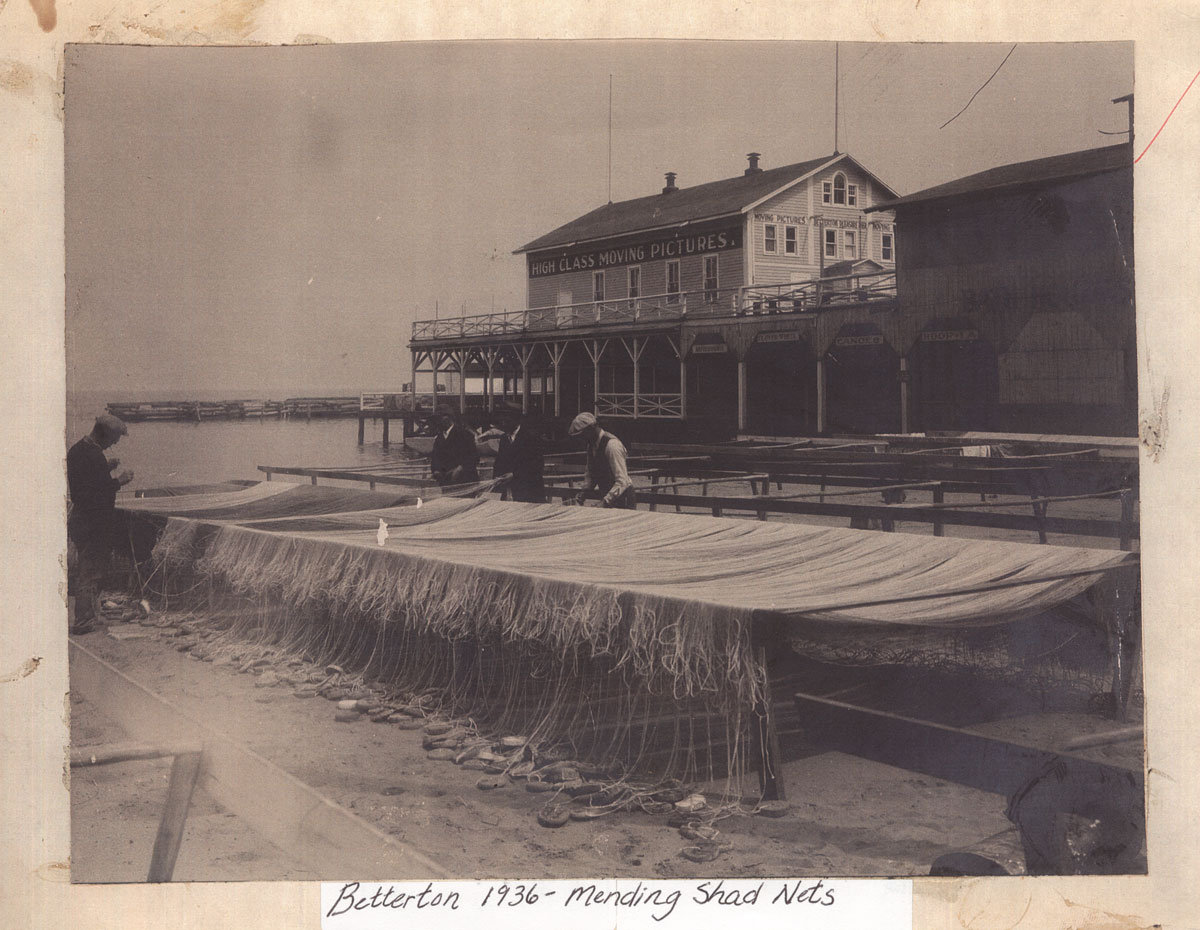 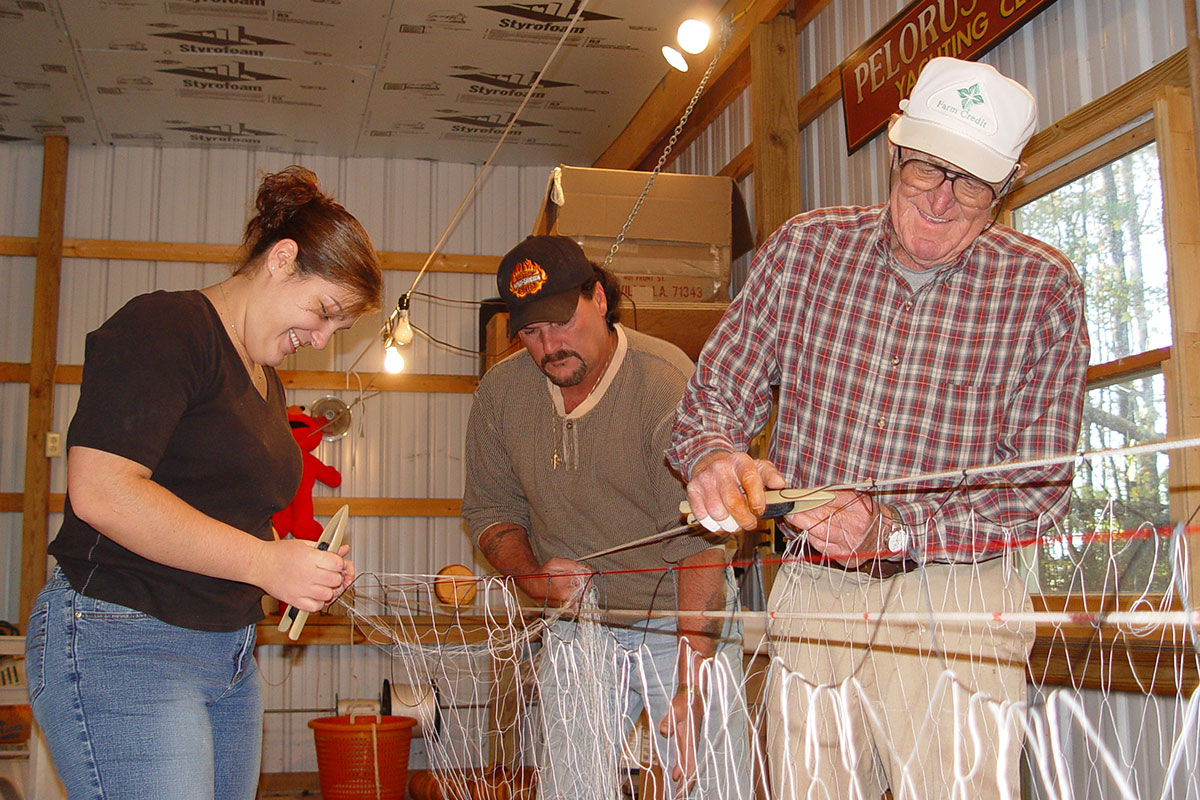 Fishing for herring on the Chowan River.
A shrimp trawler in the Neuse River, North Carolina.
Bob Hines, an expert on shrimping methods who works for the North Carolina Sea Grant, explains how a shrimp trawler works at the Smithsonian Folklife Festival.
The stakes of a pound net in the Chesapeake Bay.
Pound net boats on the Chesapeake. Fish are dipped out of the net using the smaller of the two boats, and loaded onto the larger boat.
Today, hydraulic power is used to lift purse seine nets in menhaden fishing, such as this one on the Hush Puppy, a relatively small menhaden fishing boat owned by Fred Rogers of Reedville, Virginia.
Randy Rouse uses a table top model to show how a pound net works at the Smithsonian Folklife Festival.
Kids try negotiating their way through a full-scale pound net model at the Smithsonian Folklife Festival.
Member of the crew of the Lewis Shad Fishery in Lambertville, New Jersey on the Delaware River pull in the haul seine net.
Steve Meserve of the Lewis Fishery, Lambertville, New Jersey demonstrates gearing and repairing a haul seine net at the Smithsonian Folklife Festival.
Large sturgeon like this were once common in the Delaware River and Bay near Port Penn, Delaware.
Fisherman Danny Bowden from Chincoteague, Virginia, demonstrates gearing a gill net at the Smithsonian Folklife Festival.
A worker at the Omega Proteinâ€™s menhaden net-making facility in Reedville, Virginia, repairs a net. Huge menhaden purse nets need frequent repair and maintenance.
Menhaden nets are over 100 feet long, used to make a circle around a school of fish that could number the hundreds of thousands.
Photo from 1939, showing shad nets being mended in Betterton, near Rock Hall, Maryland.
The Elburn family from Rock Hall, Maryland, gear a gill net, fitting it with weights and floats.

Several commercial fishing methods in the Mid-Atlantic region involve pulling a net through the water to catch fish. "Gill netting," as the name implies, catches fish by their gills. The fishermen work relatively close to shore, catching fish such as striped bass (rockfish) and blue fish. They set their nets where the desired kind of fish are likely to swim, and they catch the ones that are neither too small to pass through the net nor too big to bump into the net and turn away.

"Trawlers" and "draggers" pull a weighted net through the water or along the bottom of the ocean or bay. Done further from shore, trawling and dragging have been criticized for netting fish other than the target species ("by-catch"), and for damaging habitats of marine mammals and aquatic vegetation. For these reasons these types of fishing are strictly regulated.

"Pound" or "trap" netting is a common method of catching fin fish such as trout, bluefish, flounder, herring, shad, mackerel, and menhaden in the Mid-Atlantic region. The pound net is arranged along a series of slender stakes of pine or spruce that are driven deep into a river or bay bottom. Sets of poles lead the fish toward a heart-shaped enclosure and then to the "pound," where they are trapped. Fishermen come alongside the pound with a small skiff, pull up the net, and dip the fish out into a larger boat. Used in the Albemarle Sound region since the late 1860s, pound nets once caught millions of herring.

North Carolina fishermen Herbert and Bobby Byrum have been pound netting for herring in the Chowan River since the 1960s. Due to low harvests, the Byrums are the last herring fishers left in the area. They fish for crab and catfish when the spring herring season is over. "Pound netting is beautiful fishing," says Herbert Byrum. "It gets in your blood. It's hard work and exciting. If you pull up a net with 5,000 or 10,000 pounds of fish, it's a pretty sight."

Haul seining and purse seining for fish have long histories in the Mid-Atlantic region. A haul seine is a long net that is anchored in one spot, either on a boat or on shore, and "played out" in a wide circle. The two ends of the net are brought together and pulled into the boat or onto the shore with the catch. This method was used extensively by the baymen and surfmen of the East End of Long Island for many years to catch striped bass until it was prohibited in the 1980s. Haul seining is still used on the Delaware River by the Lewis Fishery in their seasonal shad fishing operation.

Purse seining is used in the region by menhaden fishermen in Reedville, Virginia, and Beaufort, North Carolina. Two boats circle the long net around a large school of menhaden and then draw the weighted net closed at the bottom like the strings of a purse to capture the fish. After the net is drawn tight, the fish are hauled up into a large "steamer" ship. Pulling the heavy nets full of millions of fish used to be done by hand with the help of work songs called "chanteys," but now the work is done with hydraulics.

Although few Mid-Atlantic fishermen today make their own nets, they still put a lot of work into them. They customize the nets to fit their boats, they dip them to prevent rotting, and they repair them when they are torn. Commercial fishermen usually know how to wield a net-knitting needle, and they put that knowledge to frequent use.

"Hanging" or "gearing" a net means attaching floats and weights appropriate for the fish being caught. Paying an expert to gear a factory-made net is a necessary expense for many fishermen. The Elburn family of Rock Hall, Maryland, gear their own nets. As Captain Danny Elburn says, "There's an art to it." His daughter Jessica is a natural. "She's very quick, and her knots stay tight," he says proudly. "A lot of kids her age don't have interest in doing a job like this. This is a big part of making a family living."