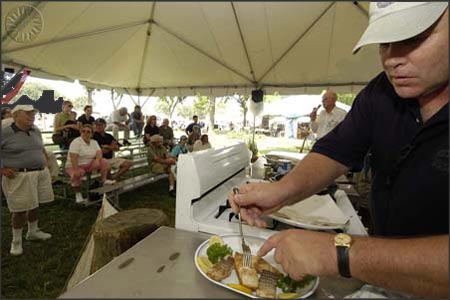 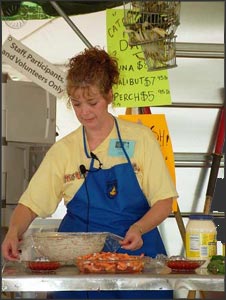 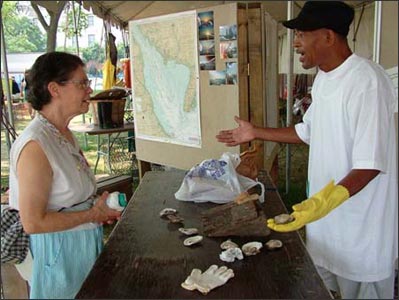 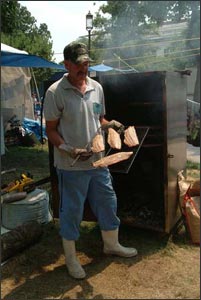 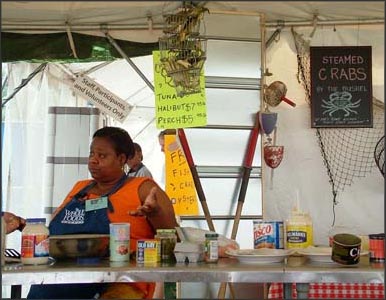 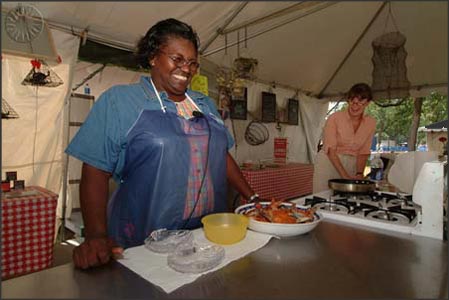 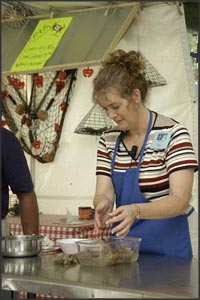 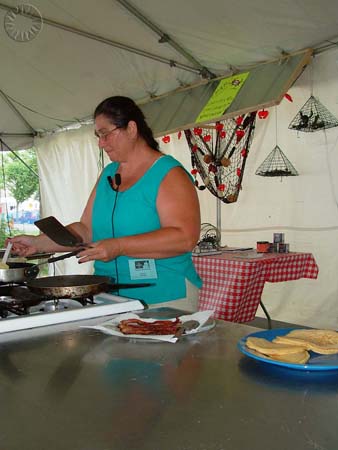 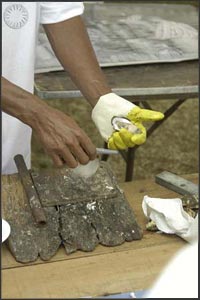 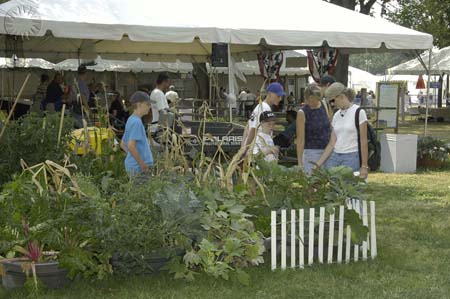 Larry McDaniel of Rock Hall cooks up some rock fish. This type of fish was so plentiful in Rock Hall that legend has it the town’s name came from “an unusually large haul of rock [fish].” A moratorium was placed on fishing the species in the 1980s-90s, and catches are still controlled.
Debbie Styrone from Cedar Island, North Carolina demonstrates cooking with North Carolina shrimp by preparing a big bowl of shrimp salad. Her husband, Bradley, demonstrated shrimp fishing with a model dragging net in the commercial fishing area.
Philip Cisrow of Port Norris, New Jersey, explains oyster shucking to long-time volunteer Alice Hirschfeld. Philip and his sisters sang gospel music while they shucked and cooked with oysters in the Maritime Kitchen. Their family has roots in Crisfield, Maryland.
Corey Weyant of Freeport, New York, shows smoked blue fish he prepared at the Festival. He also smoked eels, which he catches on the Great South Bay of Long Island.
Ramona Whittington, known as “Mama Mona” back home in Crisfield, MD, was the mainstay of the Maritime Kitchen, since she was the only cook to demonstrate all ten days of the Festival. Browse some of her recipes by following the link on this page.
Joyce Fitchett of Crisfield, MD is an eight-time crab picking champion. Like many former crab pickers, she no longer does the laborious task for a living, but she loves to demonstrate her skills to the public.
Debbie Styrone from Cedar Island, North Carolina.
Nadine Benevides from North Carolina cooks a menhaden fishing boat breakfast.
Phil Cisrow demonstrates oyster shucking with a protective rubber glove and knife.
A garden on the National Mall provided herbs and vegetables for the Maritime Kitchen.

The bountiful waters and fertile soil of the Mid-Atlantic have provided plentiful supplies of fish, fruits, and vegetables for centuries. Agriculture and fishing have always been linked here. Many women worked shucking oysters in the winter and canning tomatoes in the summer. In the off season, Chesapeake Bay oyster-dredging boats like skipjacks and schooners transported watermelons and other produce to market in Baltimore. Community celebrations like ham and oyster dinners often combine seafood with other regional products. Special vegetables like the Haymen Potato (a sweet potato grown on Virginia's Eastern Shore) flourish in the coastal sandy soil.

Communities like Smith Island, Maryland, are famous for their cuisine. Mrs. Frances Kitching was the most famous of all Smith Island cooks. Among her specialties, memorialized in Mrs. Kitching's Smith Island Cookbook, were "crab cakes plump, light, and golden without a trace of breadcrumbs...oyster stew, rich and creamy, swimming with gently poached oysters; great dumpling puffs, and crisp nips of sauteed onion...pie topped with meringue, homemade, hand-folded, and beaded like cotton candy." Mrs. Kitching's legacy lives on in Smith Island cook Janice Marshall, who won the 2003 Rock fish Cook-Off in Ocean City with her recipe for rockfish stuffed with Crab Imperial. 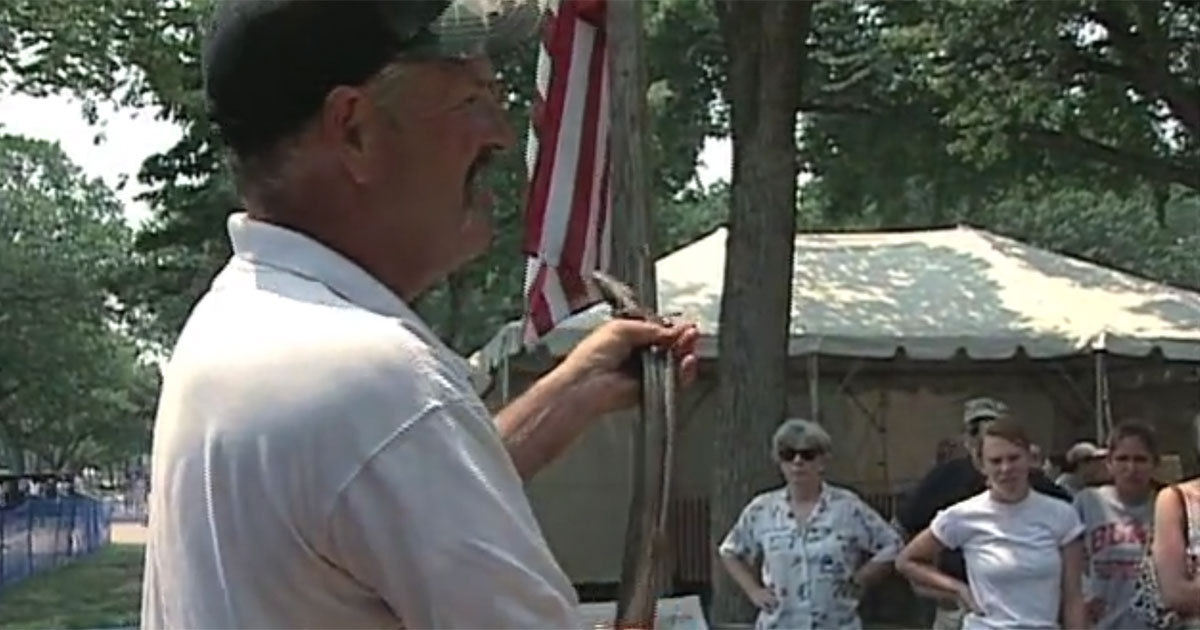