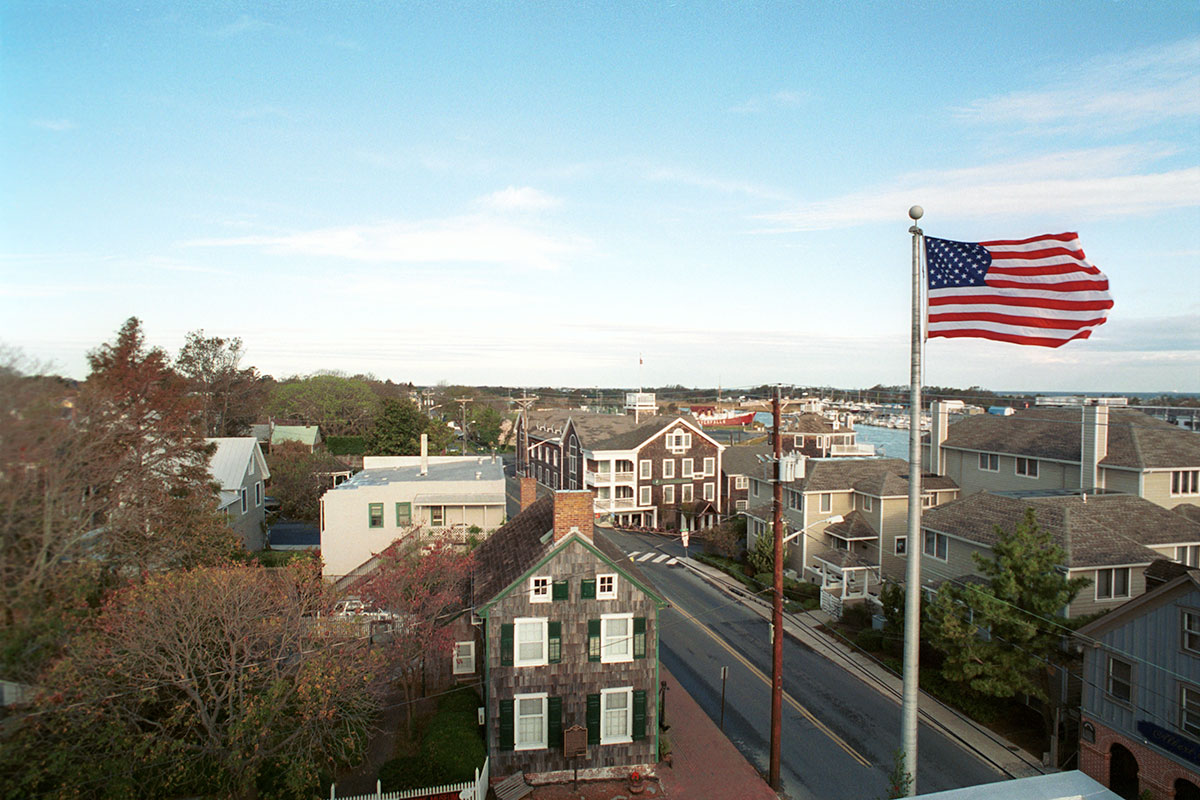 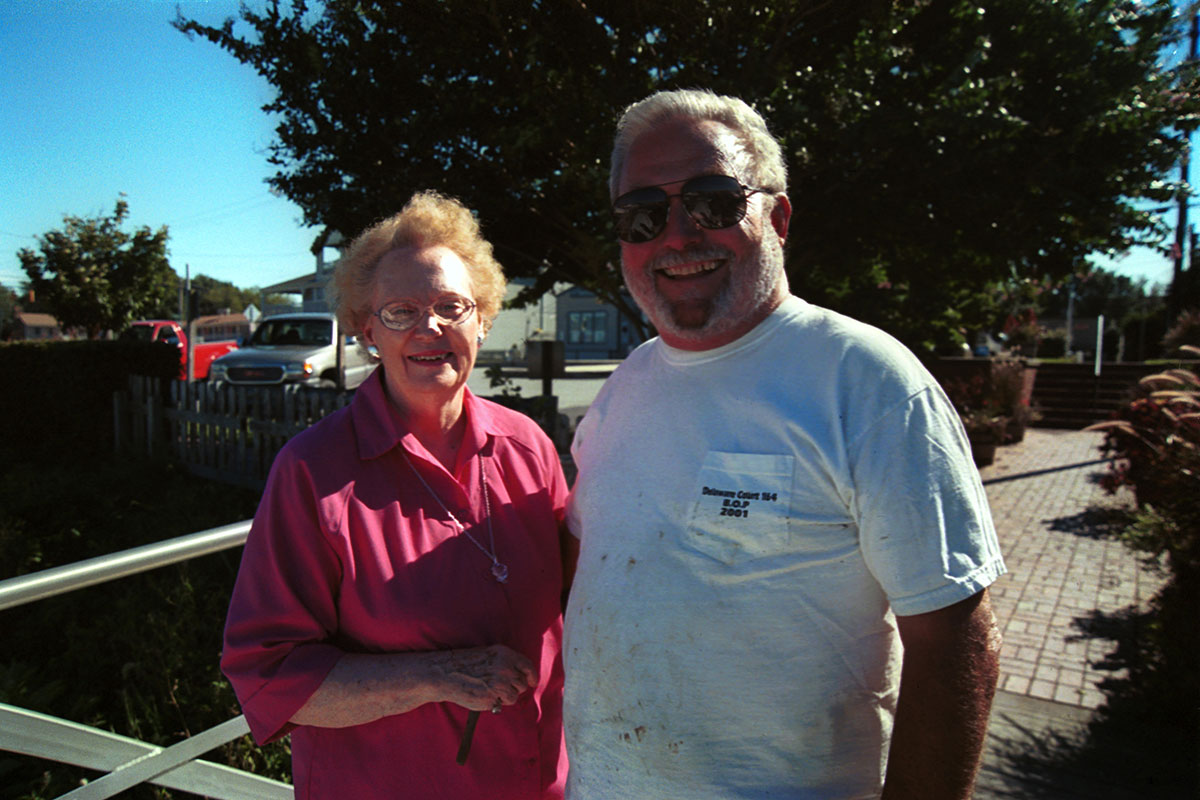 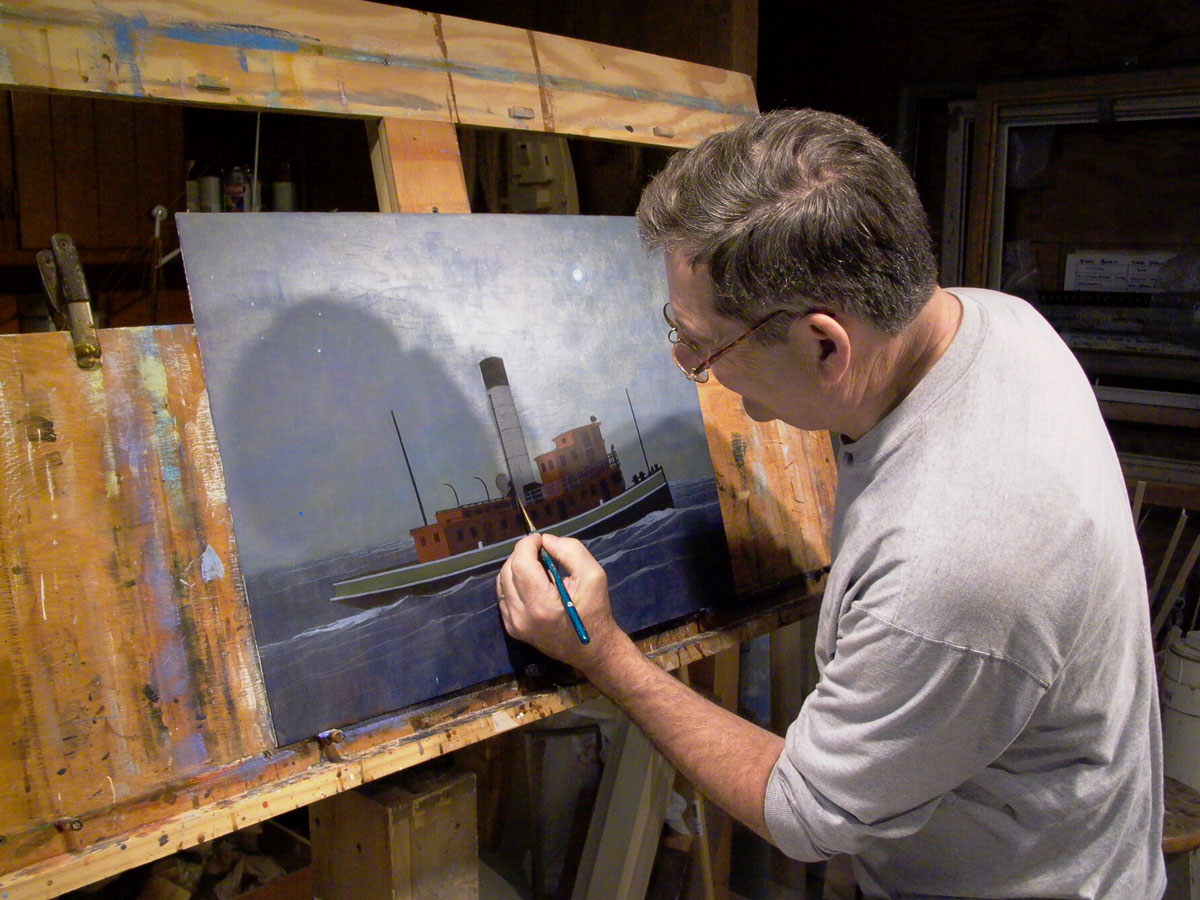 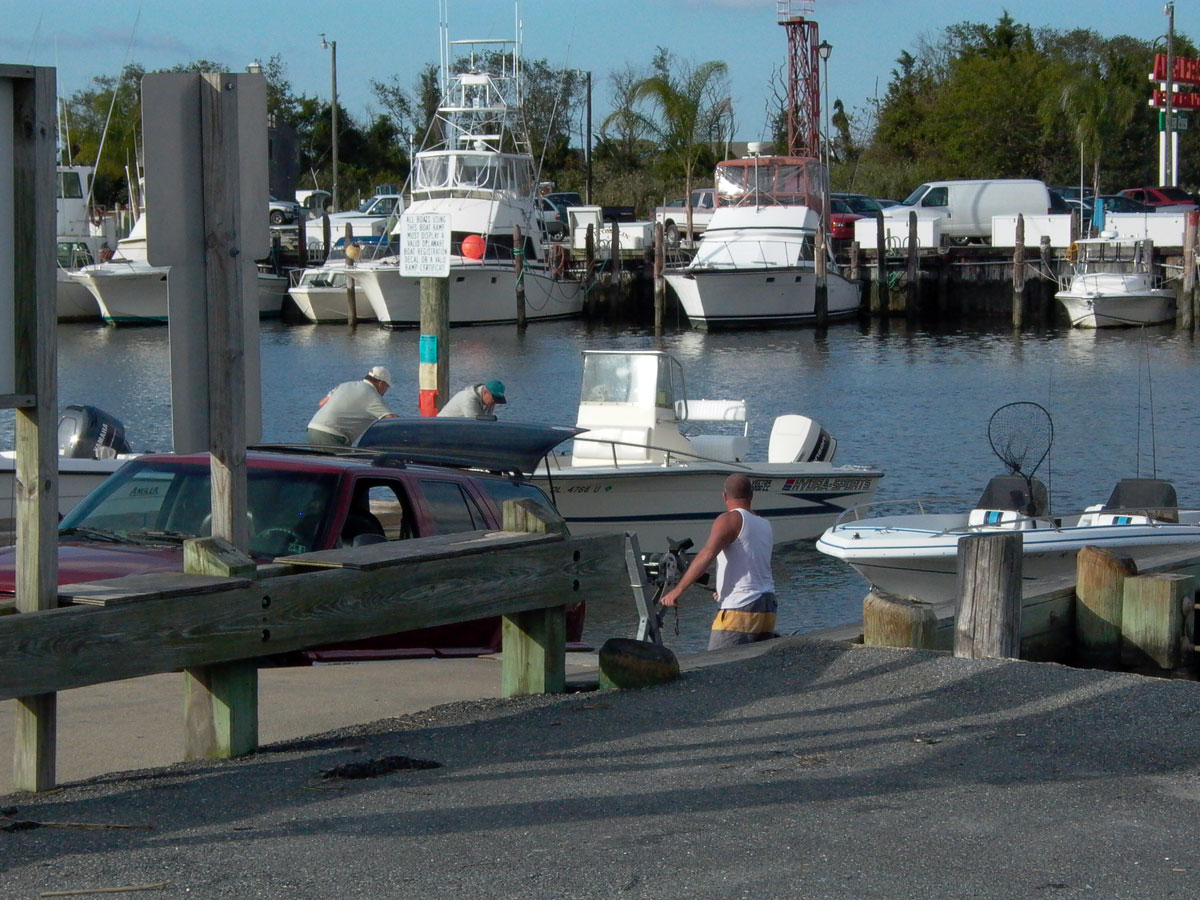 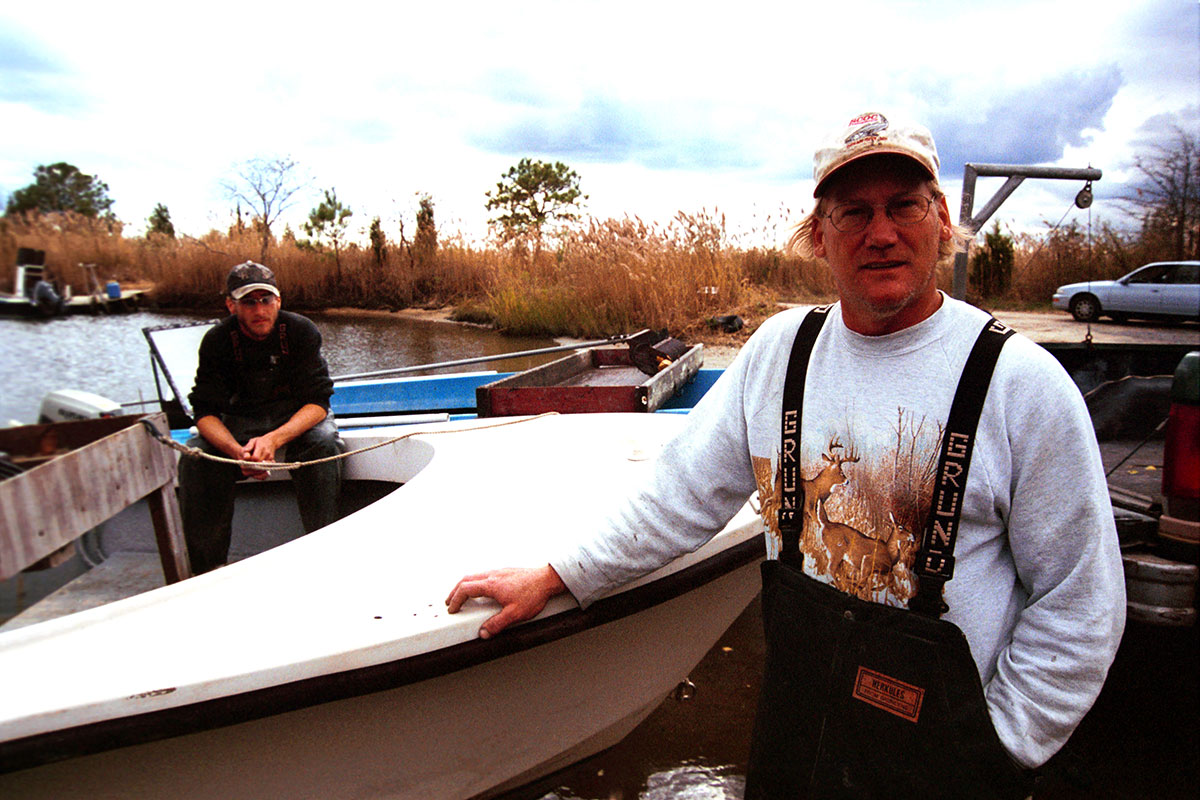 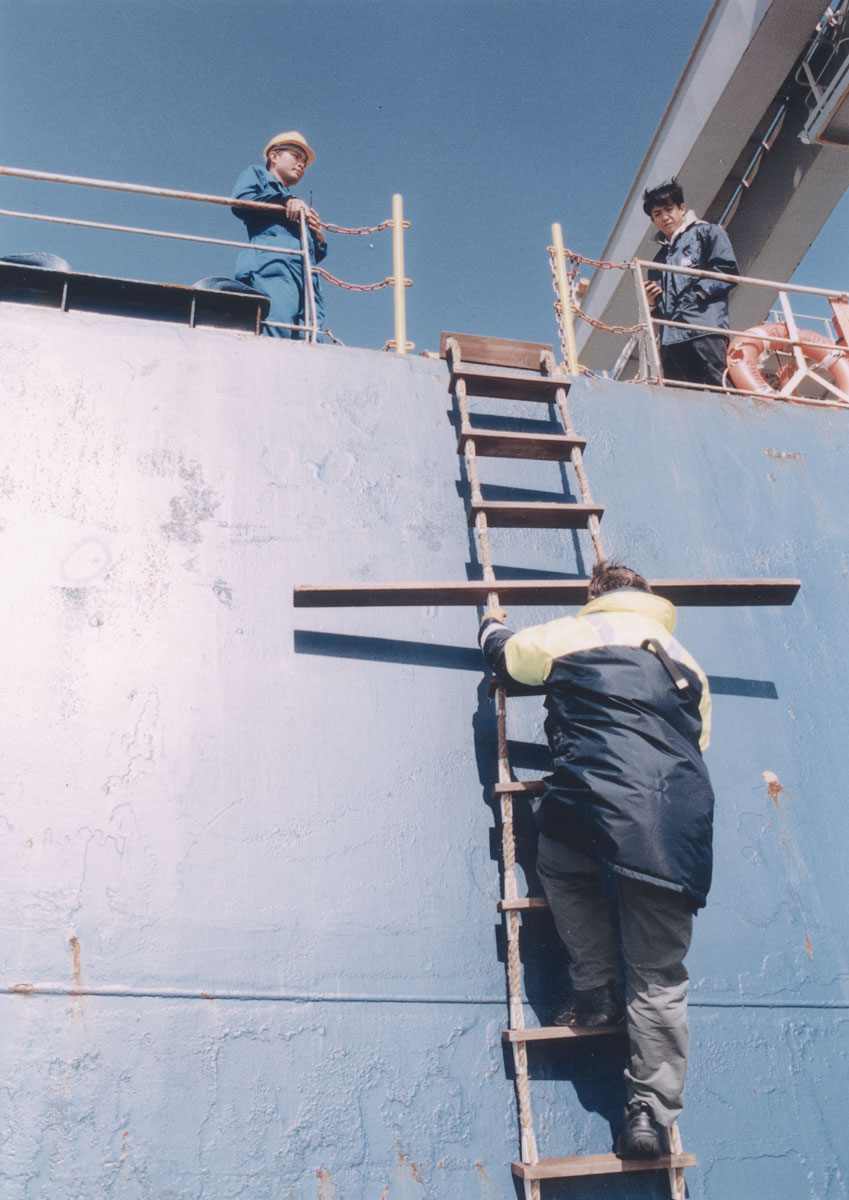 A view of downtown Lewes. In the distance, on the canal, you can see the Overfalls Lightship, which is being restored by a group of volunteers.
Hazel Brittingham, town historian, with J. B. Walsh, proprietor of the Angler’s Marina. As Hazel says, in Lewes’s history, ''everything was maritime. That's what shaped our lives.''
Steve Rogers, painter and master model-boat maker, researches the menhaden industry to give his work authenticity. Between 1953 and 1956, Lewes was considered the top fishing port in the country based on the number of menhaden netted. Rogers would like to see a museum in Lewes devoted to the history of menhaden fishing.
Commercial and recreational fishing boats on the Lewes canal (Commercial fishermen Chris Virginski and his son).
Chris Virginski and his son from Lewes.
A river pilot climbs the Jacob’s ladder to board and guide a ship up the Delaware Bay and River.

Southern Delaware offers a lot to people who love the water: the popular Atlantic beach resorts of Bethany, Rehoboth, and Dewey; historic river towns like Laurel, Milton, and Seaford; and the quiet inland bays of Rehoboth, Indian River, and Little Assawoman. In this region you can visit an authentic lifesaving station or a lightship, eat some tasty seafood, and attend a Blessing of the Fleet.

Lewes, Delaware, is strategically located where the Atlantic Ocean meets the Delaware Bay. The town boasts a good harbor for fishing boats, a lovely beach within walking distance of the lively downtown, and the ferry terminal to Cape May, New Jersey.

Tourist literature reveals that Dutch seamen established the settlement in the territory of the Lenni Lenape Indians in 1631. It was a whaling station they called Zwaanendael ("Valley of the Swans"). English settlers later renamed the town after Lewes, England. Notorious pirates visited, and the British bombarded the town during the War of 1812.

For more recent Lewes history, consult Hazel Brittingham, who has lived in the town for many years and collected its stories. Hazel tells tales of menhaden, the oily little fish that caused Lewes's economy to boom from the 1940s to the 1960s. Hazel remembers the end-of-the-week bustle at the grocery stores on Second Street that provisioned menhaden boats, and the smell of the two large fish factories where thousands of pounds of fish were processed each day: "The joke was that it smelled like money."

Chris Virginski, who follows the seasons fishing for conch, clams, crabs, and fin fish, worries about the future of commercial fishing in Lewes. J. B. Walsh, who runs the Angler's Marina on the east side of the Lewes canal, is sympathetic to commercial fishermen. But he knows what really drives the economy on the Lewes waterfront: recreational boats for hire, some of which are captained by former commercial fishermen. Anyone still fishing commercially out of Lewes is "doing it for love"--the love of being their own boss on the water.

Meanwhile, another maritime occupation in Lewes is thriving. Members of the Delaware River Pilots Association help negotiate huge container and oil ships through the bay and river to Wilmington and Philadelphia. There's a lot to know, one pilot explains. "Just because you can memorize a chart doesn't mean you have the skills to become a good pilot. You have still to learn the mysteries and secrets of how the winds and currents affect you."