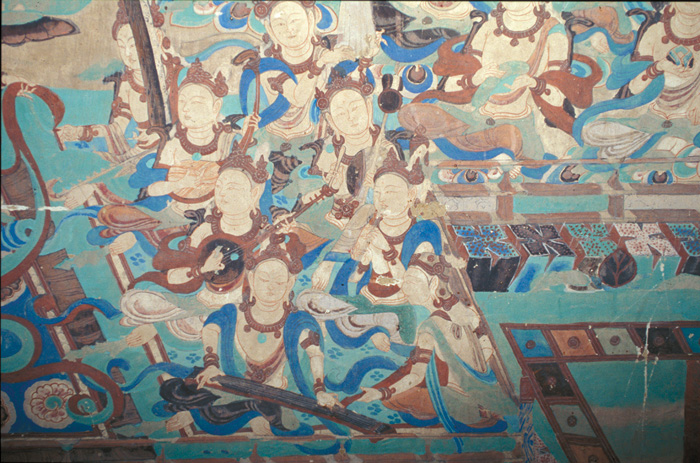 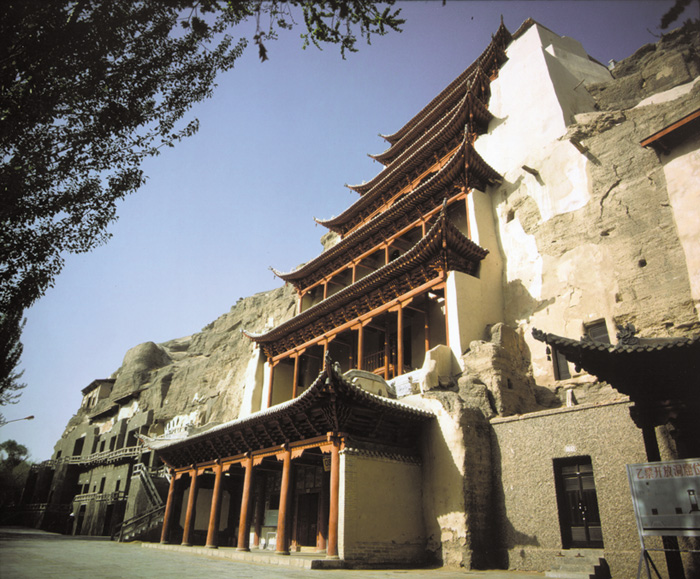 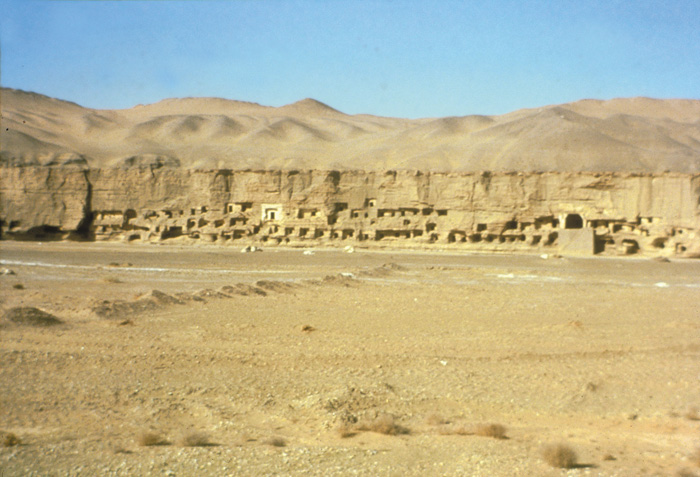 This wall painting from Cave 85 at Mogao near Dunhuang depicts 40 kinds of musical instruments, many of which no longer exist.
Photo © The J. Paul Getty Trust
This landmark pagoda encloses Cave 96 at Mogao near Dunhuang. The cave houses a 100-foot-high Tang dynasty (10th century C.E.) Buddha.
Photo © The J. Paul Getty Trust
The Caves of the Thousand Buddhas near the modern town of Dunhuang are similar to other cave complexes along the Silk Road. Here Buddhist monks and others painted Buddhist images on the cave walls between the 4th and 10th centuries C.E.
Photo by Elizabeth ten Grotenhuis

Just as the great monastery complex in Bamiyan, Afghanistan, was carved out of cliffs, so was the extraordinary center of Buddhist learning in Dunhuang. Located in western China where the north and the south branches of the Silk Road encircling the Takla Makan Desert diverge toward the west, the caves of Dunhuang contain the greatest grouping of early Chinese Buddhist paintings to survive. The caves served as temporary lodging for the Buddhist pilgrims to and from India, meditation sites, worship halls, and storehouses for documents and papers.

The caves were carved out from the 4th until the 10th century C.E. As they were created, they were filled with wall paintings and statues. After the decline of the Silk Road in the 10th century, the caves were isolated. The remaining monks probably departed in the 14th century but left a cache of documents (Buddhist sutras—scriptures—and secular documents) in a cave that they closed up. The dry climate, along with little traffic, meant that the paintings and sculptures were extraordinarily well preserved when the caves were discovered by Western explorers in the late 19th century. A sutra written on paper dates to 406 C.E. (800 years before paper was widely used in Europe).

The cave walls and ceilings are covered with murals, many of which tell the story of the Buddha and illustrate the sutras; others are elaborate ornamental designs and paintings of the patrons who would pay for the construction and decoration of the caves (and thus attain merit as part of their Buddhist devotion). Depictions of dancers and musical performances attest to the cultural diversity of those who traveled the Silk Road: acrobats from China, musical instruments from the Central Asian cities of Kucha and Kashgar, the celestial musicians and dancers associated with Buddhist art of the Indian subcontinent. Every one of these paintings was done in bright, glorious color, now faded.

Buddhism made its way along the Silk Road through Dunhuang and into central China over the first century of the Common Era. During the late Tang, Buddhism fell into disfavor, and many of the Buddhist monasteries were closed, their contents disfigured or destroyed. After the fall of the Tang in the early 10th century, Dunhuang became increasingly isolated and subject to invasions from the Tibetans. With the spread of Islam into Central Asia and western China, the complex was abandoned by the few remaining monks. Today Islam is the dominant religion in this area.