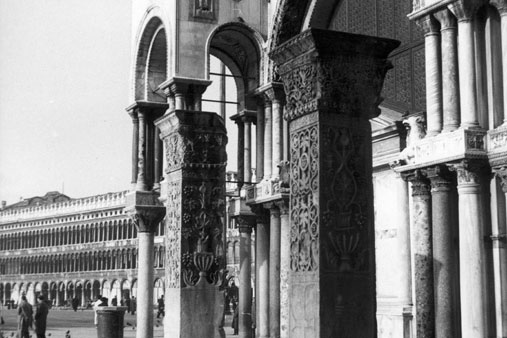 The Basilica of St. Mark

The most striking building in Venice, the Basilica of St. Mark (Basilica di San Marco) is the third church to stand on its site. Built in 829 as the chapel for the doge and to house the relics of St. Mark the Evangelist, smuggled out of Egypt by the Venetians, this first church was destroyed by fire. The second was torn down in the 11th century to make way for the current church, which was built to better reflect the growing power of the Venetian Republic. Byzantine in style, it is based on the Church of the Holy Apostle in Constantinople and embodies the cultural dialogue that occurred through the exchange of goods and ideas along the Silk Road.

Over the years the church has been remodeled and embellished; the richer Venetians became, the more they embellished. On the façade and interior are gleaming golden glass mosaics placed upon domes and ceilings, the oldest dating from the 12th century and the most recent from the 19th. The walls inside and out are covered in slabs of beautifully patterned marble; the floor is covered with decorated stone pavement. The church incorporates a large number of spoils taken in war (some as early as 1204) from older monuments in Constantinople and elsewhere in the Byzantine Empire. They include exquisitely colored marble columns, jewel-encrusted bowls and platters, and most important of all four large bronze horses from the Hippodrome (ancient race course) in Constantinople that date back at least to the 4th century C.E. Napoleon took them to Paris after the fall of the Republic in 1797, but they returned to Venice after the Battle of Waterloo.

The large central dome of the Basilica is surrounded by four smaller (though large in themselves!) domes that follow the Byzantine style. Inside, the large dome, the Ascension dome, is decorated with a mosaic of Christ in Glory, created by Venetian craftsmen influenced by the art and architecture of Byzantium. The great gold screen behind the high altar, the Pala d'Oro, combines the extraordinary workmanship of the Venetian goldsmiths with enamels the Crusaders took from Constantinople. In addition to the enamels, the screen is studded with 1,300 pearls, 300 sapphires, 300 emeralds, and 15 rubies.