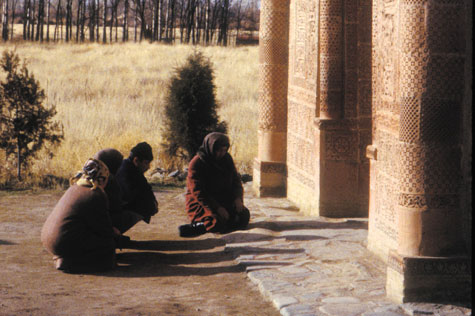 Shamanism has been called the world's oldest religion; it comes from a belief that certain individuals have the power to communicate with the unseen world of benevolent and malevolent spirits. These individuals, called shamans, summon spirits in sacred animals such as bears, or in caves, to heal a sick person or to punish a transgressor, and their power inspires both awe and fear. Nomads, whose way of life is directly connected with nature, believe that natural objects and phenomena have souls or are inhabited by spirits, and so shamanism has remained strong among them. Shamans, who in Central Asia can be men or women, often play instruments to make sounds that are said to have spiritual power, and much Central Eurasian music reflects its shamanic origins. The jew's harp, kyl qobyz (two-stringed upright fiddle), and dombra (fretless, strummed lute) are all associated with shamans.