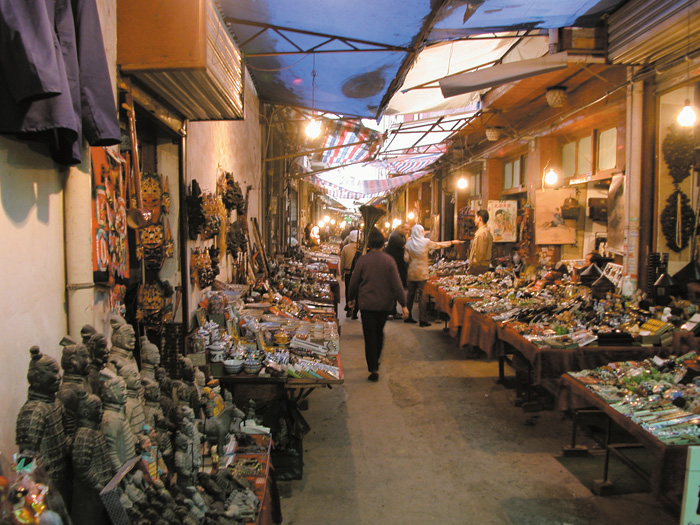 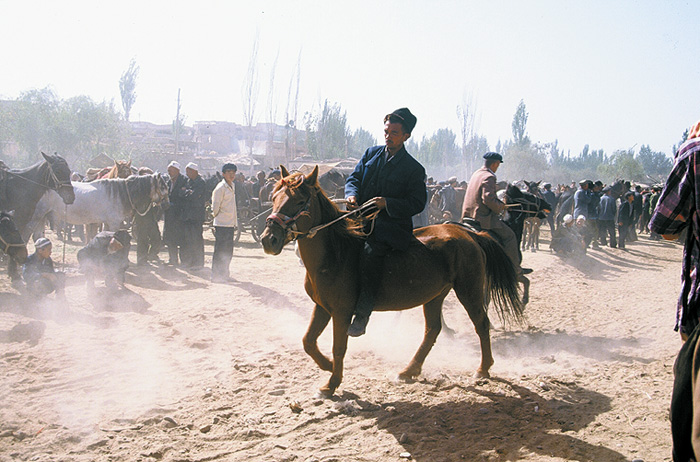 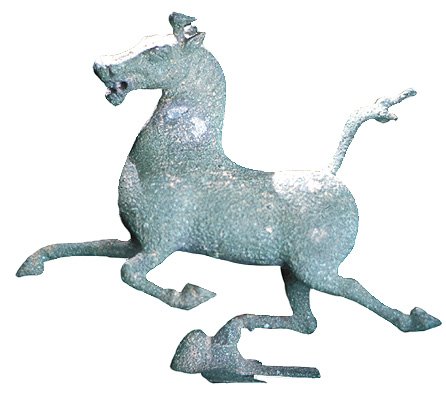 The modern market in the Muslim Quarter of Xi'an carries goods from throughout China and beyond. Muslim traders have been settled in Xi'an for over a thousand years.
>Photo by Jane Farmer © Smithsonian Institution
Crowds visit the Sunday Market in Kashgar (Kashi), western China. Markets like this one have drawn people together in Kashgar since the beginning of the Silk Road.
Photo © Hermine Dreyfuss
This is a copy of the "Flying Horse," a 2nd-century C.E. bronze found in a tomb in Gansu Province, China. Many bronze horses were fashioned by Han dynasty craftsmen reflecting the importance the Chinese placed on these swift horses from Central Asia.
Photo by Charles Weber, Smithsonian Institution

During the Han dynasty, the Central Asians, Persians, and the elite of the Roman Empire learned about Chinese silk through the travels of Zhang Qian, who had been dispatched from Chang'an on a diplomatic mission to Central Asia by the Han emperor in the second century B.C.E. Silk was traded for the famous Fergana horses used in the imperial cavalry. China began trading with Central Asia on a regular basis, exporting silk and gold, importing spices, wool, and horses.

At the height of the Tang dynasty a million peopled lived inside Chang'an's wall and a million more lived outside the wall. The wall around the city during the Tang was 22 miles long (today's shorter city wall dates to the Ming dynasty). Within Chang'an people lived in rectangular wards, each one a self-contained unit surrounded by its own wall with a gate that was closed each night. There were two great markets in the city—the Eastern Market and the Western Market—filled with shops and places to eat and drink tea. Tea drinking was especially popular during the Tang, and there was a brisk trade in tea in the markets of Chang'an.

It was a golden age for ceramics, calligraphy, painting, and poetry. Not only were goods exchanged along the Silk Road, but so were art and religion. During the early Tang, Chang'an was a religious center open to Muslims, Nestorian Christians, and Zoroastrians, among others. The Great Mosque was first built in Chang'an during the Tang for use by Muslim traders. Buddhism had been introduced to western China in the 1st century B.C.E., and clerics and pilgrims were often those who exchanged artistic and literary styles as they traveled along the Silk Road. Japan adapted several forms of Buddhism from China, the most notable being Chan, renamed Zen in Japan. Chinese artisans were valued throughout the Silk Road, and their lives were often spared during periods of warfare: they would be kept as prisoners to teach their craft to local artisans, for instance in Central Asia and Iran. In turn the local artisans of Central Asia and Iran taught their craft to the Chinese, leading to a vibrant intermixing of motifs and styles in various media such as metal, porcelain, and textiles.

While the overland Silk Road flourished during the Tang, maritime trade was also active, with the port of Canton (present-day Guangzhou) receiving traders from Arabia, South Asia, and Southeast Asia. The fall of the Tang in the early 10th century brought a decline of trade along the overland Silk Road, but Canton continued to be a major maritime trading center, especially as ceramics became increasingly important in overseas trade.

The most famous textile made in China and the one most valued in trade was silk. It was first used for gifts and in trade in the Han dynasty. During the Tang dynasty, wool from Turkestan was well known and primarily imported in the form of rugs. Chinese made their own linen from hemp, rami, and kudzu but also imported it from Mongolia and what is today Korea. Cotton, traded first in about the 3rd century C.E., began to be cultivated during the Han in what is today Yunnan in southern China, and later in the 6th century C.E. in the northwest.