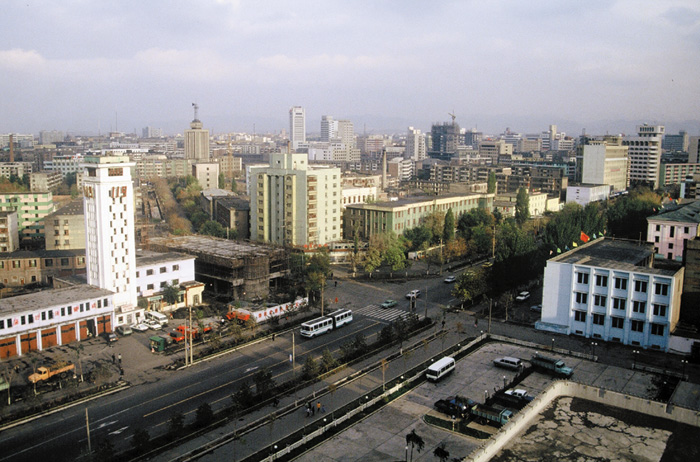 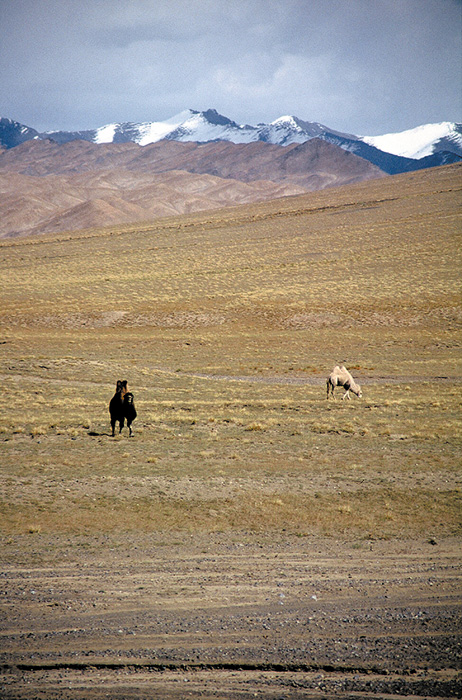 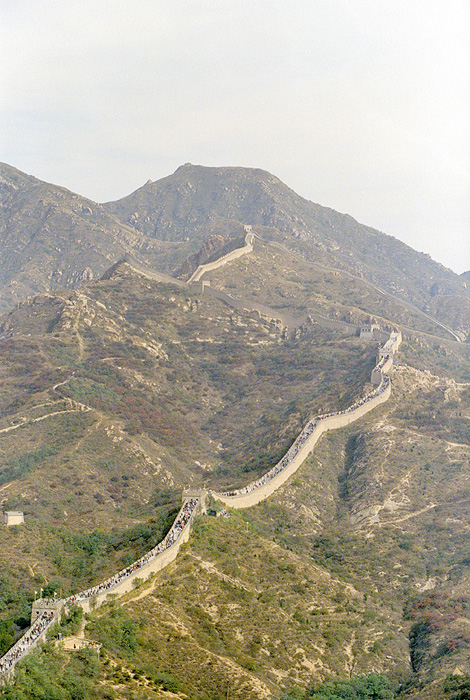 >Urumqi, with a population of over one million people, is the capital of Xinjiang ("New Land") Province in China. Uyghur people are the majority population of Xinjiang, although Urumqi is a cosmopolitan city of Kazakhs, Chinese, Russians, and Uzbeks. Some Uyghurs work for greater autonomy from China and prefer to call their province Eastern Turkestan.
Photo © Hermine Dreyfuss
>Camels graze near Kashgar (Kashi), in western China. Kashgar lies between the vast Takla Makan Desert and the towering Pamir Mountains.
Photo © Hermine Dreyfuss
The Great Wall of China was constructed over a long period to keep nomadic invaders out of central China. Although much of the present wall was built after the time of the Silk Road, the construction of barriers between the nomadic and settled people of northern China dates back to the Qin dynasty (221–200 B.C.E.).
Photo © Jean-Luc Ray, Aga Khan Foundation

In abundance of flowering plants and fruits,
it is the most fertile of the Nine Provinces.
In natural barriers for protection and defense,
it is the most impregnable refuge in heaven and earth.
This is why its influence has extended in six directions.

Thus wrote a first-century Chinese historian about Chang'an (present-day Xi'an). Located in the small but fertile basin of the Wei River Valley and with access through gorges to the rich land of the Yellow River in North China, Xi'an was able to grow millet and wheat. Its location in the valley made the area strategically defensible as well.

To the west of Xi'an stretches the Gansu corridor, which runs between the Qilian Mountains in the south and the vast Gobi Desert and the Mongolian plateau in the north. To the west lie the Takla Makan Desert and the oasis cities of Turpan, Urumqi, and Kashgar in the present-day Xinjiang Autonomous Region. It was from these cities in present-day western China that routes led across the Pamir Mountains to Samarkand, Bukhara, and then across the Oxus River (Amu Darya) to Iran, Istanbul, and eventually to the Mediterranean Sea.

The Silk Road not only followed this northern route but also went to the south to Tibet, Burma, and the Indian subcontinent. In the later Han dynasty, as the overland Silk Road became too dangerous to travel, Canton (present-day Guangzhou) began a thriving sea trade, which expanded during the Song dynasty (10th-13th century). Sea routes transported luxury goods between China, Southeast and South Asia, and the Middle East, and the Chinese themselves began to travel and settle in foreign trading ports. In addition, as ceramics began to be as important as silk as items of trade, it was far easier to transport these heavy goods by ship rather than by camel, and maritime commerce grew.

In 1953 a neolithic village was discovered in Xi'an dating to around 4500 B.C.E. Called Banpo, it is one of the best preserved sites of this period. People practiced agriculture, raised pigs, buried their dead in special burial grounds, and made painted pottery. In the 11th century B.C.E. the Zhou dynasty established its first capital near present-day Xi'an. But because of attacks by nomads, an ongoing problem for rulers in this part of the country, the Zhou was forced to move its capital east. At the beginning of the 3rd century B.C.E. the Qin state conquered the Zhou, and the other states in China became unified under Qin Shihuangdi, who has been called the first emperor of China. He established the capital of the Qin dynasty (221–206 B.C.E) near the former Zhou capital. To protect his empire from the northern tribes (the Xiongnu), he connected a series of defensive fortifications to form a wall separating the settled lands of his empire from the north. Though not related to the Great Wall we know today, this wall is sometimes considered the first occasion when the Chinese used a long fortified "wall" for defense. Part of Qin Shihuangdi's success in unifying China was his use of cavalry; terra cotta models of 6,000 warriors and horses can be seen in his tomb.

Qin Shihuangdi predicted that his dynasty would last for a thousand years, but under his weak son the empire soon fell apart, and a peasant leader, Liu Ban, established the Han dynasty in 206 B.C.E. During the Han dynasty the Central Asians, Persians, and the elite of the Roman Empire learned about Chinese silk through the travels of Zhang Qian, who had been dispatched from Chang'an on a diplomatic mission to Central Asia by the Han emperor in the second century B.C.E. Silk was traded for the famous Fergana horses used in the imperial cavalry. China began trading with Central Asia on a regular basis, exporting silk and gold, importing spices, wool, and horses.

At the height of the Tang dynasty in the 8th century C.E., China's territorial reach extended as far as the Tarim Basin in the west, to Manchuria in the northeast, and into the Indo-Chinese peninsula in the south. Merchants, scholars, clerics, and diplomats could thus travel easily to China, and this increased contact meant growth in trade and cultural exchanges. Information on foreign foods, music, and customs are found in Tang writings. Ceramics began to compete with silk as a leading category of export. Since ceramics, due to their weight and bulk, were easier to transport by sea than by camel, maritime trade increased.

During the Song, Chinese shipbuiders began to build massive oceangoing junks. Up to 300 feet long, they were able to carry from 500 to 1,000 people. It was during the Song that the Chinese invented the compass, and built lighthouses. Chinese exports included silk, metals (gold, silver, pewter, copper, tin, and lead), ceramic wares, and tea; imports included horses, furs, wool from Manchuria, sulfur for gunpowder from Japan, spices such as cloves and cardamom from southeast Asia, tortoise shell from Tibet, ivory from Syria, pearls from Japan and the Persian Gulf, and coral from the Mediterranean.

The vastness of the Mongol empire (Yuan) (1279–1368) facilitated the flow of information as well as commodities. In 1320 Zhu Siben, a cartographer, made a map that became the foundation for Chinese knowledge of the world for the next several hundred years. His map includes phonetic designations for about 100 place names in Europe, shows a town where Budapest now is, and depicts the Mediterranean Sea. During the Yuan, Persians and Central Asians dominated Chinese science and technology. The Mongols employed a number of foreigners in the government: Muslims from Central Asia, Tibetans, West Asians, and according to Marco Polo, himself.

Jesuits lived in Beijing and elsewhere in China during the early Qing dynasty (1644–1912). Through the late 18th century, the Chinese were interested in Europe and knowledgeable about its products and industries. The 19th century was a period of crisis for China. Instead of looking to its western borders for trade, China opened treaty ports along its coast. Trade flowed through a vastly different route than in the days when Chang'an was considered one of the most important cities in the world.

Ch'ang-an (Xi'an) was the capital of two of China's greatest dynasties, the Han dynasty (206 B.C.E.–220 C.E.) and the Tang dynasty (618–907 C.E.). At their height both the Han and the Tang ruled vast territories extending into the west and north of what is today Central Asia and Mongolia, allowing vibrant trade along the Silk Road.