From Buzkashi to Polo

The game we call polo has long been associated with horsemanship along the Silk Road. Its origins have been attributed to Central Asia, to Baltistan (a region where Afghanistan, Pakistan, India, China, and Tibet meet), and to Iran. It was introduced to China in the 7th century, supposedly by the son of the last Sasanian emperor of Iran, who took up life at the Tang court. The Chinese then transmitted polo, which they called "hit ball," to Korea and Japan. Polo horses were sent from Khotan, Turkestan, and Iran for polo-playing Chinese aristocrats, both women and men. 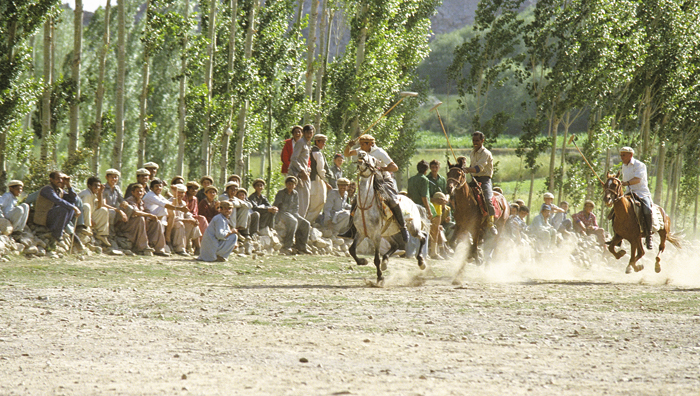 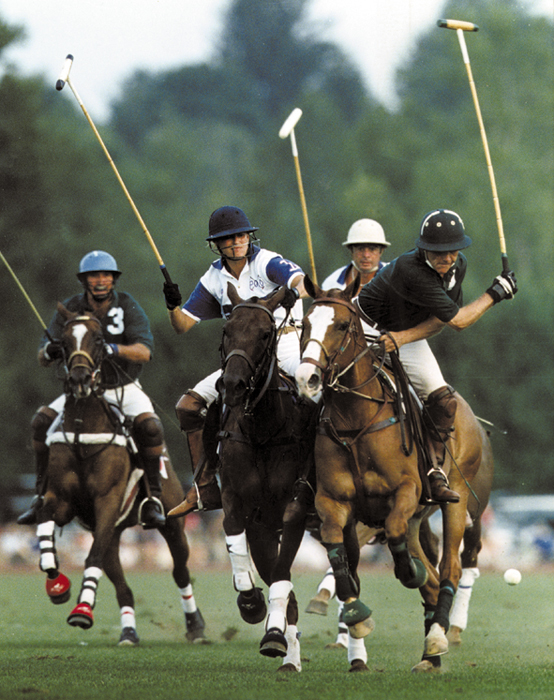 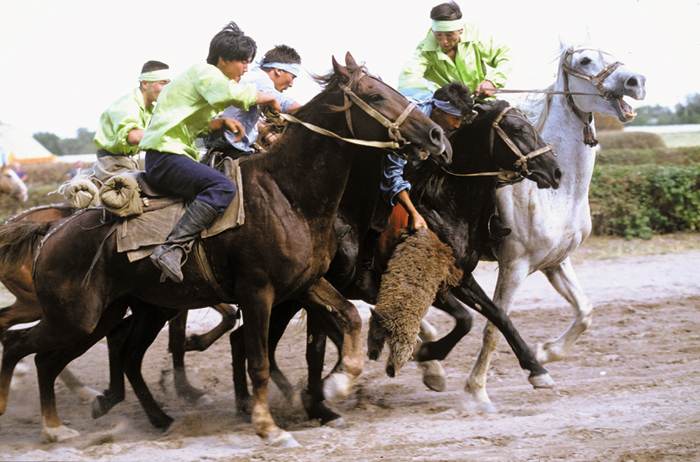 Riders play "Ulak Tartysh" (buzkashi), a traditional horse game of the nomadic Kyrgyz people, at an Independence Day celebration in Bishkek.
Photo © Hermine Dreyfuss
Polo has been played in many forms throughout the Silk Road and beyond. Polo clubs continue the tradition in the United States.
Photo courtesy Saratoga Polo Club
A game of polo is played in Susoom, Pakistan, in 1985.
Photo © Jean-Luc Ray, Aga Khan Foundation

The game has a number of variations. The polo played today in the United States comes from the British game that itself developed from buzkashi, a competition that 19th-century British soldiers saw in the area of colonial India that is today in the border region of Pakistan and Afghanistan. Buzkashi, a raucous display of competitive horsemanship, is still played today. It involves two teams of variable number—typically from 10 to 50 players—and variable degrees of organization. The field might be a large meadow with an area or a pit designated as the goal. A goat or sheep carcass serves as the ball. Horsemen from one side must scoop up the carcass, ride around a pole or marker, reverse course, and drop the carcass into the goal. Players are extraordinarily skillful, using a number of riding maneuvers and a repertoire of hand-held armaments to either aid or attack the carcass-carrier. The game is a combination of celebration, exercise, and a public display of riding prowess. The riding skills are precisely those needed to attack caravans, raid towns, and fight military campaigns. Afghans celebrating the fall of the Taliban played buzkashi.

The British colonial soldiers introduced buzkashi to Victorian England; it was adapted and later adopted by Americans. British polo is also played today among army units and clubs in India and Pakistan and by Pakistanis and Indians living in the United States. It is identified in the public mind as a sophisticated and perhaps aristocratic game but one that involves a great deal of skill, some danger, and much bravado.

Turkic and Mongolian horsemen from Inner Asia were probably the world's earliest fiddlers. Their two-stringed upright fiddles are strung with horsehair strings, played with horsehair bows, and often feature a carved horse's head at the end of the neck. The horsehead fiddle's origin is a legend well known among musicians in Mongolia, Tuva, and other pastoral societies. According to the legend, a herder received the gift of a magical winged horse; he would mount it at night after a day herding sheep and fly to a distant place to meet his beloved. But a woman became jealous of the herder and had the horse's wings cut off, so that the horse fell from the air and died. From its bones the grieving herder made a fiddle on which he played beautiful and poignant songs about his horse. 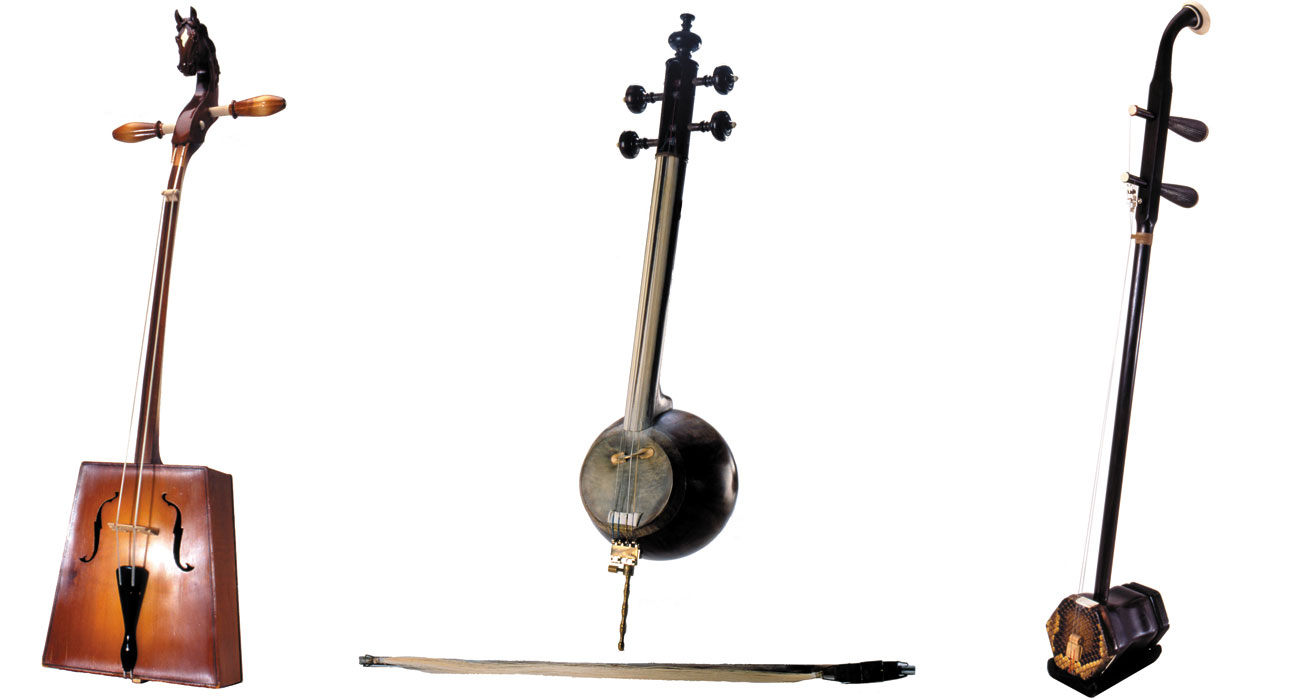 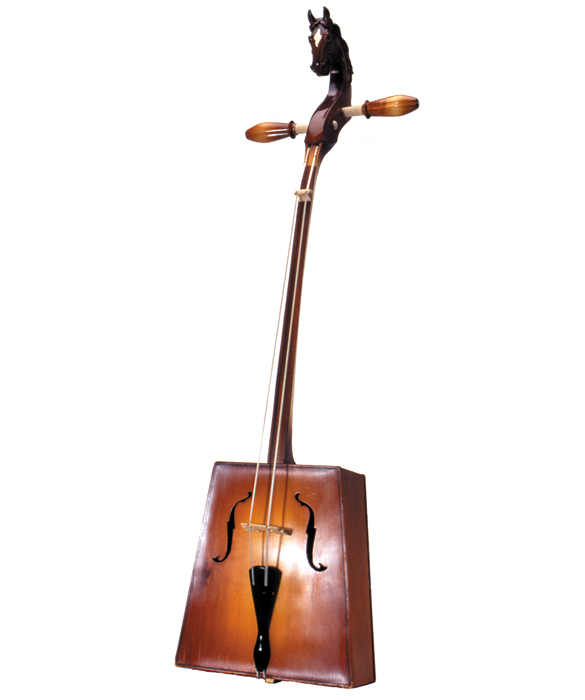 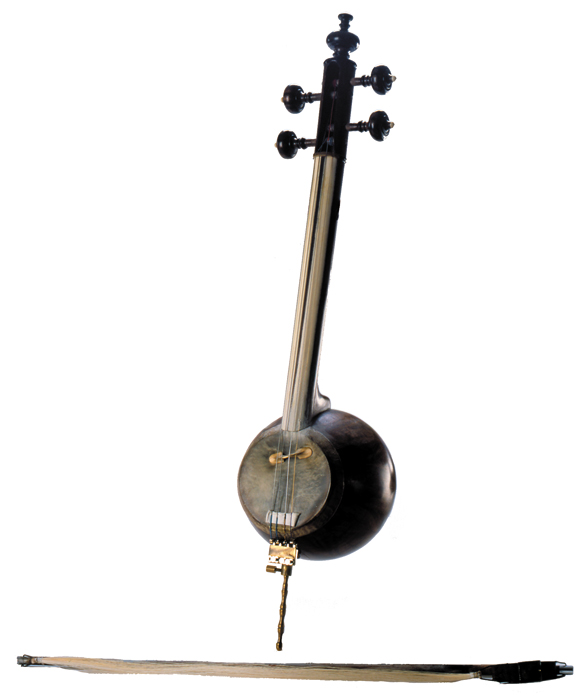 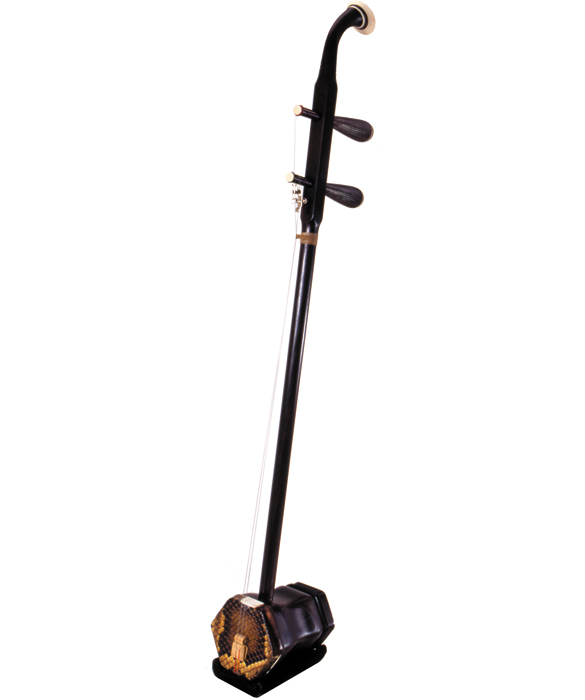 Morin huur means "horse fiddle," and is recognizable from its pegbox, which is carved in the shape of a horse. This Mongolian instrument may well be the closest ancestor to the original bowed fiddle from Inner Asia.
credit
The kamanche is a spike fiddle played in Iran, Azerbaijan, and Armenia, particularly in improvised music known as maqam. The first known reference to the kamanche was in the 12th century C.E.
credit
The erhu is a two-stringed fiddle from China. The front of its body is usually covered with snakeskin. Instruments like the erhu have been prevalent in China since the 12th century C.E. and are part of a group of instruments known as huqin, or "foreign string instruments," indicating they were introduced from outside China.
Image by Tara Todras-Whitehill

Another explanation of the origin of bowed fiddles, closely linked to shamanism and spirit worship, is that they were created by shamans to represent the sound made by the friction of two hunting bows. For shamans, the sound of the fiddle's deep, vibrating, lower register personifies the murmuring and rumbling of the Lower World, while the upper register can express the dazzling, silvery radiance of the Upper World.

Shamanic instruments may also have inspired the round-bodied spike fiddles played in West Asia (kamanche, ghijak) and Indonesia (rebab), the carved fiddles of the Asian subcontinent (sorud, sarinda, sarangi), and the two-stringed fiddles of China called the huqin ("foreign qin") of which the best known is the erhu. By the 11th century, lutes, viols, oboes, zithers, and drums and other percussion instruments had already reached Europe from Central Asia and the Middle East. The violins, violas, and cellos we play today, and whose bows are still strung with horsehair, are a legacy of the nomads.