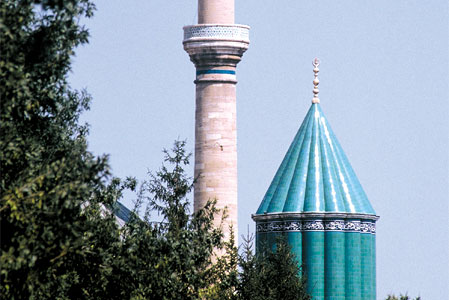 Sufism can be defined as the mystical dimension of Islam. Sufis yearn for a direct experience of God, who is often called "Beloved" in Sufi poetry. The desired ecstatic experience of God is matched by asceticism, and in fact the term sufi means "one who wears undyed wool," which is considered part of a simple and ascetic lifestyle. Sufis belong to orders, or brotherhoods, which have been founded or inspired by great religious teachers or Sufi saints. These brotherhoods, called tariqa ("way" or "path" in Arabic), have their own prayer houses that serve the function of a spiritual embassy in the places Sufis travel. For instance, a Sufi from India might meet a Sufi of the same brotherhood from Samarkand at a prayer house along the Silk Road. They would engage in communal prayer, chanting and singing; each brotherhood has developed its own form of devotional and ritual practice to lead them to the ecstasy of experiencing God. The Alevis, a religious community of Turks and Kurds, perform a mystical dance whose movements are said to imitate the crane, a bird long considered sacred among Turkic peoples. The Mevlevi, founded by the great Persian mystical poet Jalaladdin Rumi (d. 1273), practice a form of sacred dance which has led people to call them "whirling dervishes."

Sufis were one of many religious groups that moved across the Silk Road and helped spread Islam to India, Africa, and Southeast Asia. In the Silk Road lands, Sufism has had both an esoteric and a popular dimension. Religious storytellers, poets, musicians, and praise singers have all been inspired by the spirit of Sufism, with its call for tolerance, piety, and love of God.