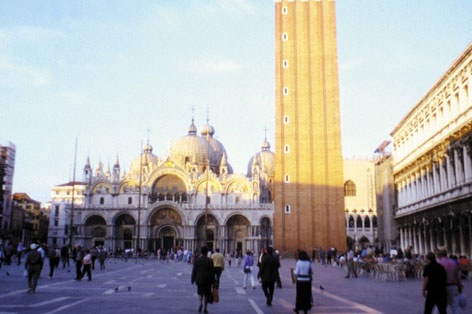 Thousands of people traveled along the Silk Road; the legendary Venetian adventurer and merchant, Marco Polo (1254-1324), is among the most famous today. He made his long journey during the height of Venetian influence on Silk Road commerce and dictated the story of his travels while imprisoned in the city-state of Genoa, one of Venice's trade and military rivals.

The Polos were jewel merchants who traded throughout the Middle East and Central Asia. At the age of 17, in 1271, Marco Polo joined his father and uncle on an expedition from Venice to China by way of Turkey, Armenia, Iran, Afghanistan, and Mongolia. It was rare for merchants (or anyone else) to consider traveling the entire Silk Road between China and Italy; usually merchants employed middlemen to act on their behalf for most of the way. It took the Polos four years to reach Xanadu (present-day Chengdu in Sichaun province), the summer court of the Mongol emperor Kublai Khan. According to Marco Polo's story, he, his father, and his uncle remained in China for most of the next 17 years (1275-92).

In 1292 the Polos accompanied some 600 courtiers and a Mongol princess to Iran, where the princess was to be married. They sailed south from China around the tip of India and into the Persian Gulf. Leaving the Chinese delegation, the Polos traveled overland to the Black Sea and then by ship to Venice, arriving home in 1295, 24 years after they had departed. Shortly afterwards Marco Polo was captured during a battle with the Genoans and brought to a prison in Genoa, where he dictated his story. Known in Italian as Il Milione, Marco Polo's Travels, as it is known in English, gives a detailed description of his travels and of the court of Kublai Khan, the Mongol capital in Dadu (present-day Beijing), the use of paper money, and the silks of Suzhou. He omits information on topics as the Chinese language, tea drinking, and printing. There is an ongoing debate among scholars over whether he actually reached China or based his account on reports by other travelers. Whatever the case, his descriptions of life along the Silk Road have been studied and enjoyed by generations of cartographers, merchants, explorers, and general readers.