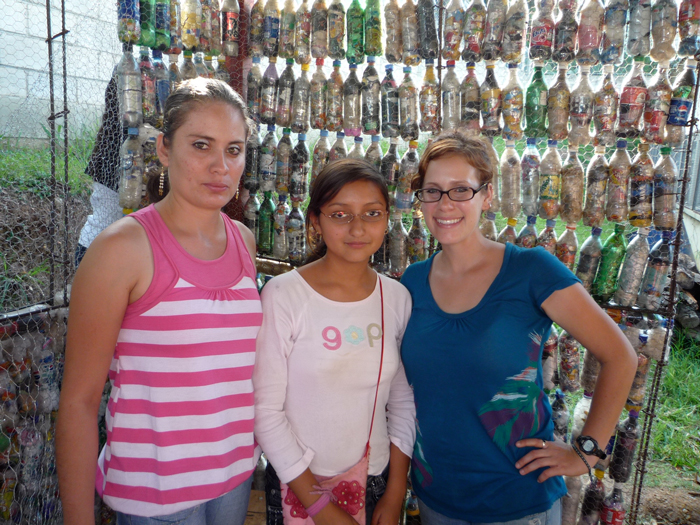 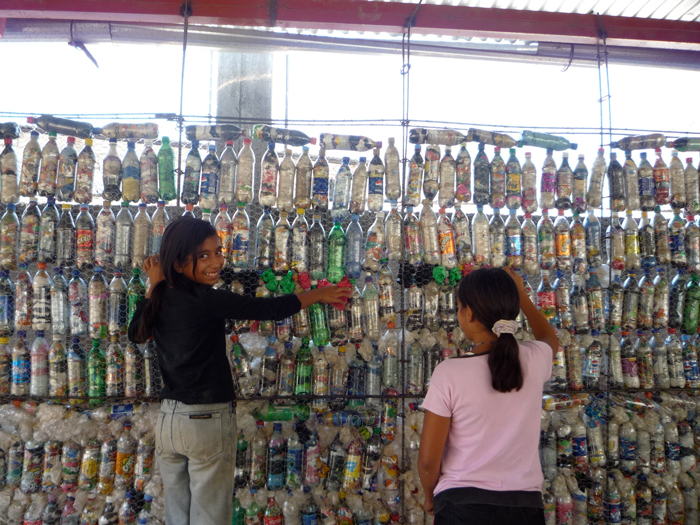 In 2007, when Peace Corps volunteer Laura Kutner first arrived in Granados, Guatemala, she noticed two problems: the town needed more school classrooms but could not afford to build them; and trash littered the streets. Laura’s idea—to build two classrooms out of plastic bottles and inorganic trash—helped solve both problems.

Building walls out of trash requires bottle “bricks,” or bottles stuffed with roughly three pounds of trash. Each “brick” is stacked into a wooden frame and held in place with chicken wire. The resulting wall is then covered with layers of cement and painted.

Building with bottles is cheaper than using cement block, but is just as sturdy against earthquakes. Moreover, the process contributes to removing tons of trash from the streets. The success of the bottle school in Granados inspired many other communities in Guatemala to build similar structures.

Reyna Floridalma Alvarado de Ramirez, Granados, Guatemala
Reyna is the principal of the largest elementary school in Granados, Guatemala. A natural and inspirational leader, she rallied the community to construct the school’s two classrooms out of plastic bottles and trash. In her free time she enjoys being with her family, helping take care of her newborn grandchild, and playing basketball.

Zonia Judith Garcia de Garcia, Granados, Guatemala
Zonia was born and raised in Granados, Baja Verapaz, Guatemala. She recently retired after more than two decades of teaching elementary school. She enjoys public speaking as well as making lavish flower arrangements from paper for the Catholic Church. She spends her free time with her family and taking care of her grandchild.

Laura Kutner, Portland, Oregon, Returned Peace Corps Volunteer, Guatemala
Originally from Portland, Oregon, Laura began her Peace Corps service in Guatemala in 2007 as a youth development volunteer. She had such a positive experience that she decided to extend her service a third year as a volunteer leader. Along with the school bottle construction project in Granados, she worked to implement a life-skills curriculum in local middle schools.