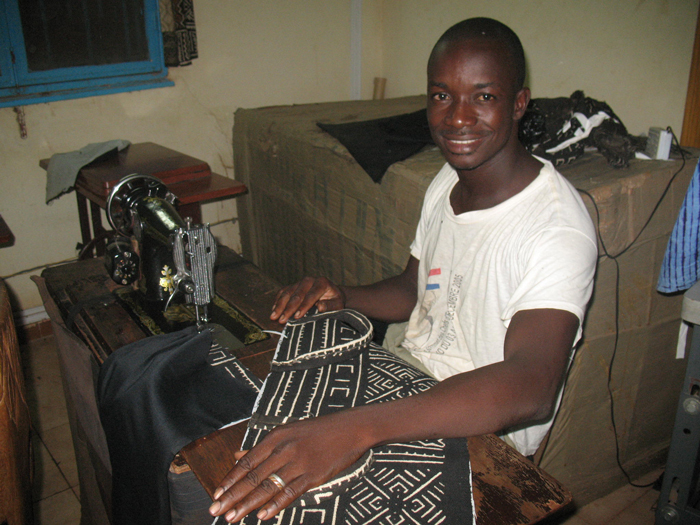 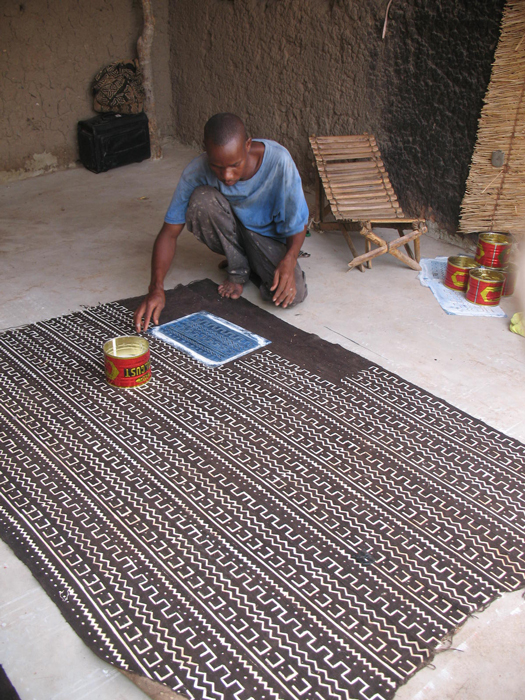 In 2006, Bobby Shriver (the son of Sargent Shriver, first director of the Peace Corps) and musician/activist Bono co-founded (RED) to combat HIV/AIDS through business partnerships with some of the world’s most recognizable brand names. One of those companies, Hallmark Cards, began partnering in 2007 with Peace Corps volunteers in Mali to manufacture authentic African products.

One such product is Malian mud cloth, also known as bògòlanfini, which utilizes iron-rich mud, natural dyes, and cotton cloth to produce distinctive colors and culturally symbolic patterns. Traditionally worn as protective clothing in Mali, mud cloth is now also used in many other ways around the globe.

Under the (RED) label, bogolan bags were sold at more than three thousand Gold Crown stores in the United States and Canada. Peace Corps volunteers worked with Malian tailors such as Issa Téssougué, dyers such as Moussa Fofana, and managers such as Hamadoun
(Simbé) Sankaré to provide technical and operational support.

Moussa Fofana, Sévaré, Mali
Moussa has been making Bogolan bags since 2000 and owns his own workshop where he works with his family. Moussa, assisted by the Peace Corps, helped make bags with the Moussa Signe Bead Museum for Hallmark Stores during their (RED) Campaign. Through this experience, Moussa’s professional contacts have expanded, and he continues to makes bags for non-profit organizations in the Mopti and Sévaré regions of Mali. Moussa is married and has one daughter.

Hamadoun (Simbè) Sankaré, Sévaré, Mali
Hamadoun, who goes by Simbè, has been the manager of Farafina Tigne, the only bead museum in Mali (located in Sévaré), since 1999. Before that, he taught night classes for children who could not attend school during the day. Simbè has a long-standing relationship with Peace Corps volunteers in Mopti, Mali, who have helped him improve his English, offered valuable advice for his business, and continue to offer support as friends. Simbè is married and has twin daughters and one son. He looks forward to building even more friendships at the Folklife Festival.

Issa Téssougué, Sévaré, Mali
Issa is a tailor from Sévaré, located in the Mopti region of Mali. He has been a tailor since 1995, and currently owns a workshop called Danaya Couture, which means “Trust in Sewing.” Issa says that the opportunity he received through the Peace Corps to be a part of producing Product (RED) Bogolan bags for Hallmark Stores helped him earn and save money for his family. Issa is married and is the father of four children, one son and three daughters.