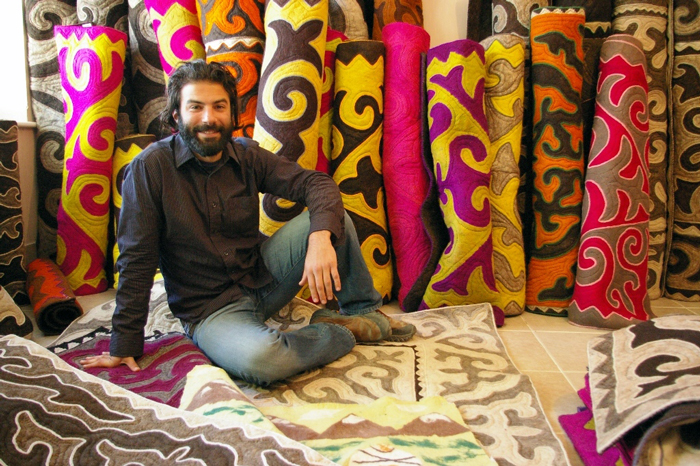 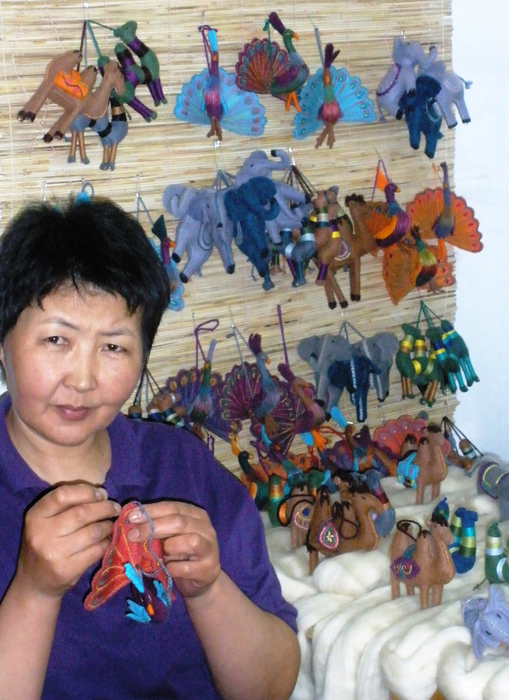 The Kyrgyz Republic in Central Asia has a long tradition of creating textiles from felt and silk. Perhaps best known are shyrdak, or ornate felt rugs, which customarily were used solely for household purposes, but which are now generating new jobs and income for women in rural areas. Two Kyrgyz organizations that are promoting traditional crafts are the Altyn Kol Women’s Handicraft Cooperative, established in 1997 in Kochkor, and Shai-Kesh Kyrgyzstan, established in 2010 in Karakol.

Peace Corps volunteers began working with Altyn Kol in 2005, primarily to assist with small business development. Since then, volunteers have helped the organization with everything from strategic long-term planning to online sales and marketing. Similarly, Peace Corps volunteers are working with Shai-Kesh (which means harmony) to improve relations between Kyrgyz and Uzbek people. Shai-Kesh hopes to achieve this by incorporating elements of both Kyrgyz and Uzbek art in its designs and craft products.

Gulmira Chonbagyshova, Kochkor, Kyrgyz Republic
Gulmira has been a part of the Altyn-Kol Women’s Handicraft Cooperative since 1997 and has served as the organization’s craft department chief since 2003. She currently manages the cooperative’s store in Kochkor, selling handmade felt carpets, hats, slippers, and toys. She is a talented designer and has exhibited some of her work at an international show in Switzerland.

Andrew Kuschner, Kyrgyz Republic, Peace Corps Volunteer
Andrew has been a Peace Corps volunteer in Kyrgyzstan since June 2010. Seeing the country’s high unemployment rate in contradiction with the developed skills of the people of Kyrgyzstan, he set off to organize a business to help alleviate the discrepancy. The solution was Shai-Kesh Kyrgyzstan, a handicraft business. In his spare time Andrew enjoys traveling to new countries.

Mahabat Sultanbekova, Bishkek, Kyrgyz Republic,
Peace Corps Staff
Mahabat was born and raised in Bishkek, the nation’s capital. As a member of the Peace Corps office staff, Mahabat manages public outreach and coordinates U.S. grant programs that support Peace Corps volunteers and local communities across the country. She is a musician and plays several Kyrgyz folk instruments such as the komuz and ooz (mouth) komuz.

Elena Urakayeva, Karakol, Kyrgyz Republic
Under the guidance of her mother who worked as a seamstress, Elena has been stitching and sewing since age fourteen. With the support of a Peace Corps volunteer, Elena started the Shai-Kesh Kyrgyzstan handicraft business in November 2010 with the hopes of providing skilled, impoverished women the chance to realize their needlework abilities. She also enjoys dancing in her free time.