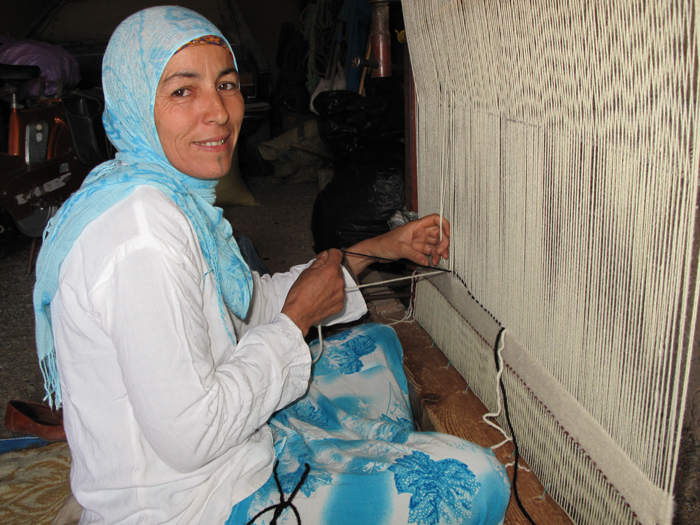 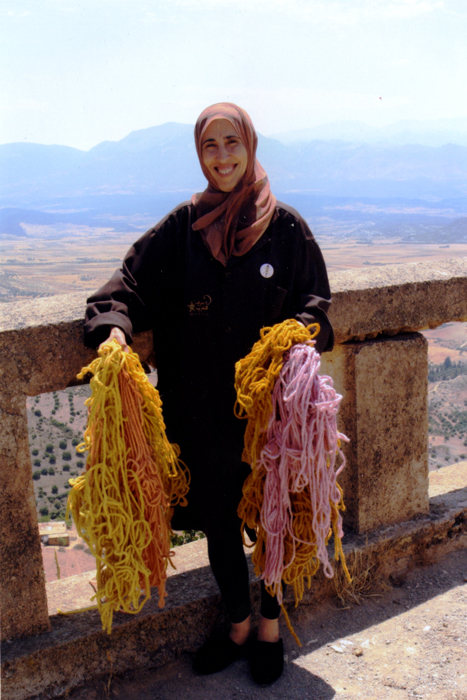 The art of weaving is one of Morocco’s most important cultural expressions. It is both an important economic mainstay and a source of great cultural pride for male and female weavers.

Peace Corps volunteers in Morocco are helping to sustain traditions such as carpet weaving, which is an Amazigh (Berber) art practiced mainly by women. Two weavers are here at the Smithsonian Folklife Festival: Fatima Akachmar, president of the Taeawniya Adwal, a weaving cooperative established in 2006 in the Middle Atlas region of northern Morocco; and Khadija Ighilnassaf, president of the Jamaia Tifawin (Association of Light), a weaving cooperative established in 2007 in the high desert region of southern Morocco.

Cooperatives—like the ones these artists represent—provide weavers with greater economic security. They also train younger artisans and augment their opportunities for producing carpets of extraordinary beauty and utility.

Fatima Akachmar, Ribat El Kheir, Morocco
Six years ago, Fatima created the Andwal Cooperative for weavers in order to preserve the traditional weaving of her region. Although she was not a weaver at the time, Fatima learned the art and now is considered to be a master. She currently serves as the Andwal Cooperative president. As a leader in her community, Fatima is often called upon to teach other women her skills and to participate in important community activities.

Anna Hermann, Morocco, Peace Corps Volunteer
A Saint Louis native, Anna began her Peace Corps service in September 2009 as a small business development volunteer in the High Atlas Mountains of Morocco. In addition to working closely with a weaving and embroidery cooperative in her local village, Anna helps organize training and craft fairs for handicrafts artisans throughout Morocco.

Khadija Ighilnassaf, Taznakht, Morocco
Khadija is a master weaver and devotes much of her energy to serving as the president of Jamaia Tifawin, the Association of Light. Formed in 2007, Jamaia Tifawin is dedicated to the marketing and selling of Moroccan rugs. In addition to guaranteeing that the women artisans directly receive the profits from these sales, the organization works as a communication and information network for them with the broader goal of empowering women and girls by encouraging independence through the sale of their handicrafts. Additionally, Jamaia Tifawin works to train young artisans, helping them learn practices that will make their efforts more profitable.