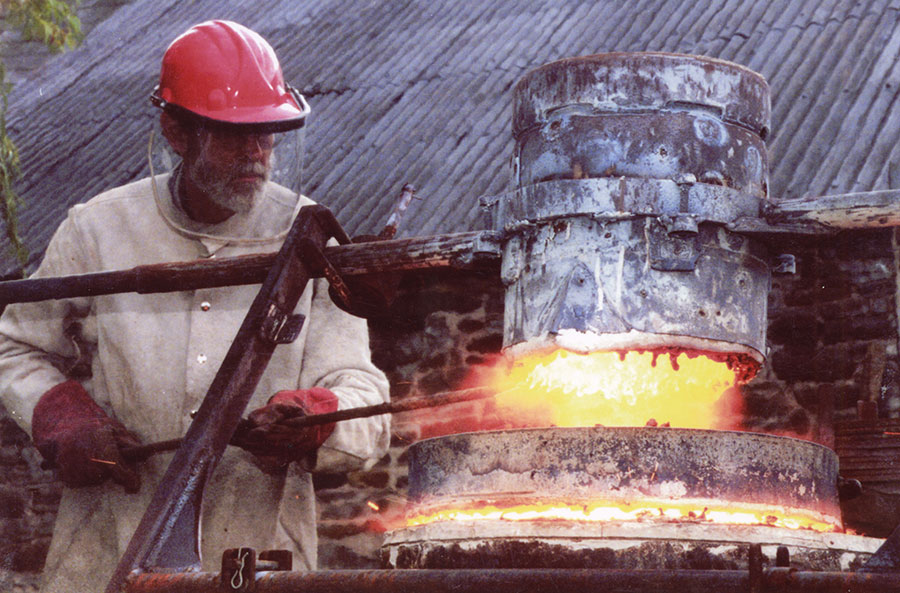 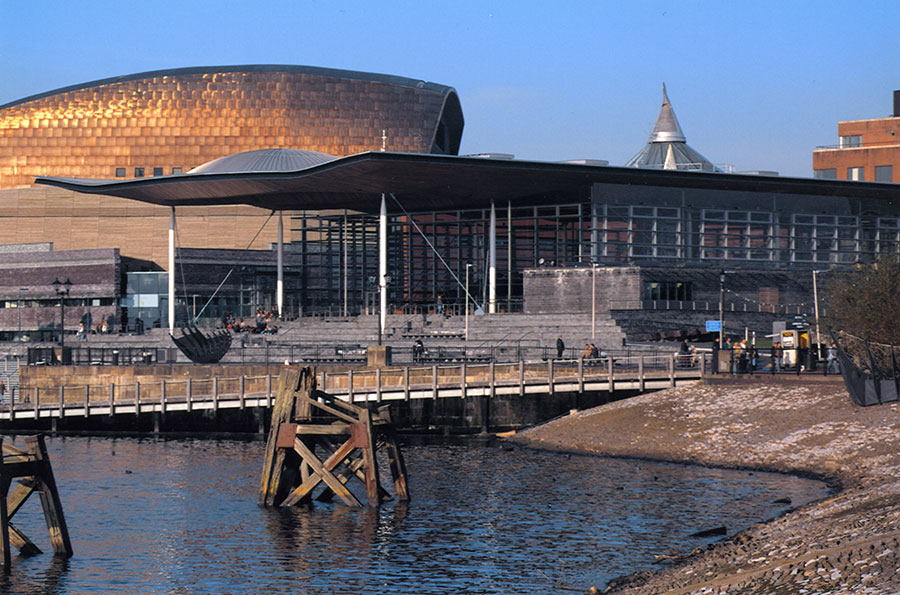 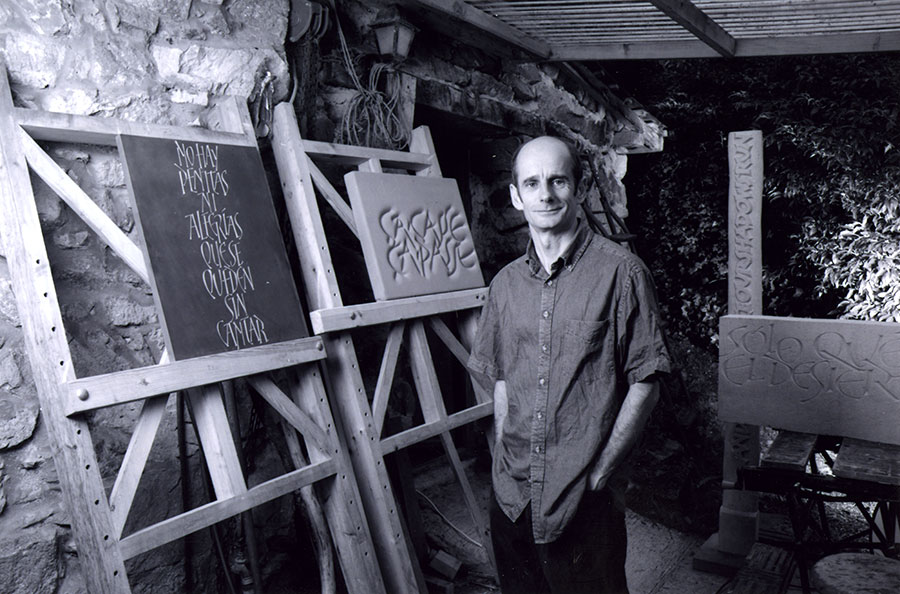 Matthew Tomalin, a contemporary metal artist, pours molten iron into a mold at his workshop in Caerau Farm, Llanfrynach.
Photo courtesy of Matthew Tomalin
John Neilson from Llansilin puts a new twist on the art of carving letters into slate. Skilled craftspeople have carved gravestones and memorial plaques for centuries in Wales and Welsh communities in America.
Photo courtesy of Ruthin Crafts Centre
The Senedd (Senate) in Cardiff Bay, where members of the National Assembly for Wales meet and debate, was designed with native Welsh materials, including slate, to create a sustainable structure.
Photo Crown Copyright (2009) Visit Wales

Iron-making, an ancient Welsh industry, reached major proportions in the early to mid-1800s. Over the years, iron-making in Wales has waxed and waned; until quite recently, sheet-steel production kept the industry viable. Some Welsh companies, such as Doncasters, are thriving today by producing state-of-the-art metal items for aerospace and medical uses. Moreover, Welsh blacksmiths and other craftspeople still work with iron, shaping it into utilitarian and artistic forms.

According to historic evidence, slate served as a roofing material as early as the thirteenth century. But despite rich deposits of this stone in North Wales, slate extraction did not become a major industry there until the 1700s. By 1882 Wales shipped more than 450,000 tons of slate per year from various ports; by 1972 this number had declined to about 22,000 tons. Today a handful of Welsh companies still quarry this versatile material. Because only one-tenth of the quarried slate is suitable for use in building, huge piles of slate waste exist in North Wales. New applications for this excess stone include crushing it for inclusion in road surfaces, and even grinding it finely for use in paints.

Howard Bowcott, Penrhyndeudraeth
Before becoming a sculptor, Bowcott was a civil engineer and stonemason, and many of his sculptures reveal a contemporary take on traditional working methods. Crafted from local materials, Bowcott's innovative sculptures are displayed in public and private sites, both indoors and outdoors. Each contributes to its environment and landscape in a unique and powerful way.

Dafydd Davies, Rhiwlas
Davies, a former apprentice at the famous Penrhyn Quarry, is a craftsman at Amgueddfa Lechi Cymru/National Slate Museum in Llanberis, North Wales. He skillfully demonstrates to visitors the centuries-old craft of splitting slate slabs, showing how thin sheets of slate are trimmed to produce the most sought-after roofing material in the world.

Iona McLaggan, Merthyr Mawr
McLaggan, a former English teacher, began blacksmithing almost twenty years ago. Working in her studio in the hamlet of Merthyr Mawr, she is inspired by the coal heritage of the South Wales Valleys and the historic shipping ports of the Bristol Channel. She finds joy in the versatility, delicacy, and toughness of metal.

John Neilson, Llansilin
Neilson is a letter carver and lettering designer who works primarily with stone and slate. He lives in Wales and studied calligraphy at Roehampton Institute in London. He handcrafts memorials, plaques, and sculptural pieces for private and public clients, is a former member of the Arts Council of Wales Crafts Advisory Panel, and edits the letter exchange journal Forum.

Dafydd Roberts, Tregarth
Roberts is director of Amgueddfa Lechi Cymru/National Slate Museum. He manages and leads a team which interprets and presents "the most Welsh of Welsh industries" to over 120,000 visitors annually. The Museum has received a national "Sense of Place" award and is housed in the historic engineering workshops of the Dinorwig Slate Quarry, which operated until 1969.

Matthew Tomalin, Brecon
Although Tomalin has worked in many different metals at many different scales, his current artistic practice centers on cast iron. He runs a highly unusual one-person iron foundry at his studio in the Brecon Beacons in Wales, and his award-winning work, which blurs the line between fine and applied art, is exhibited throughout the UK.