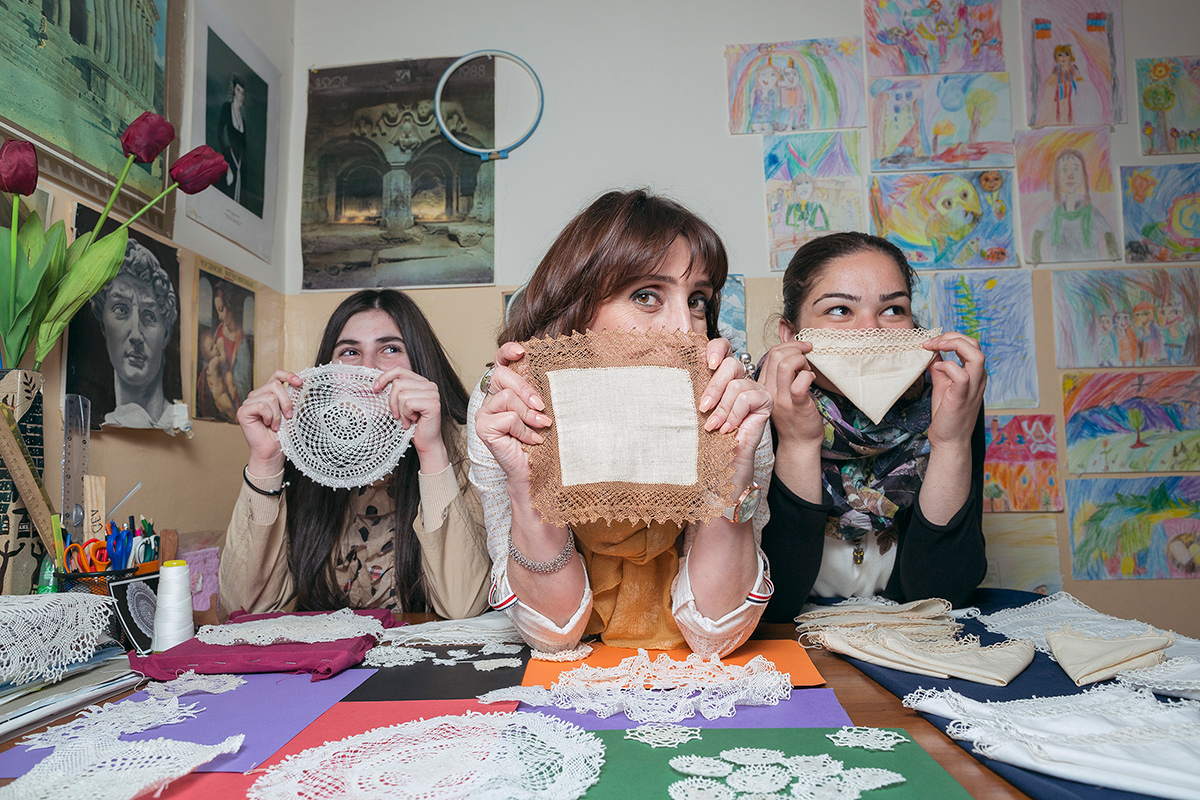 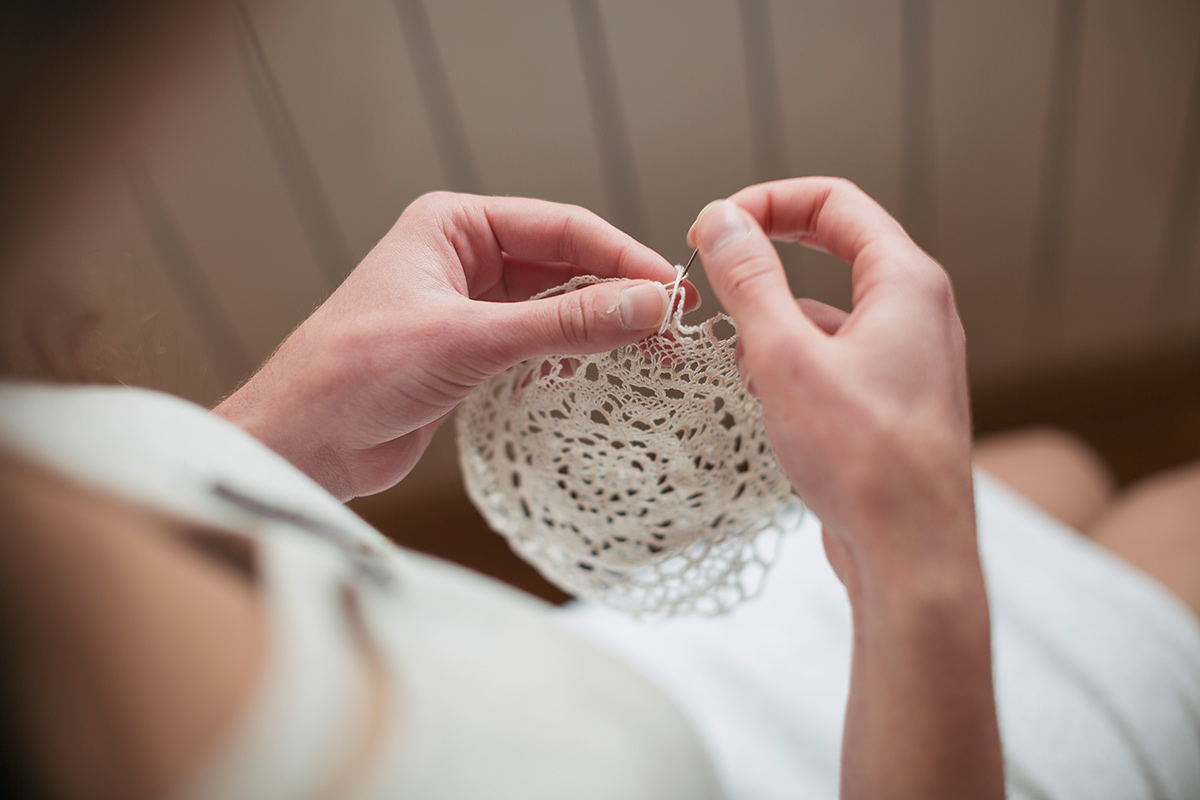 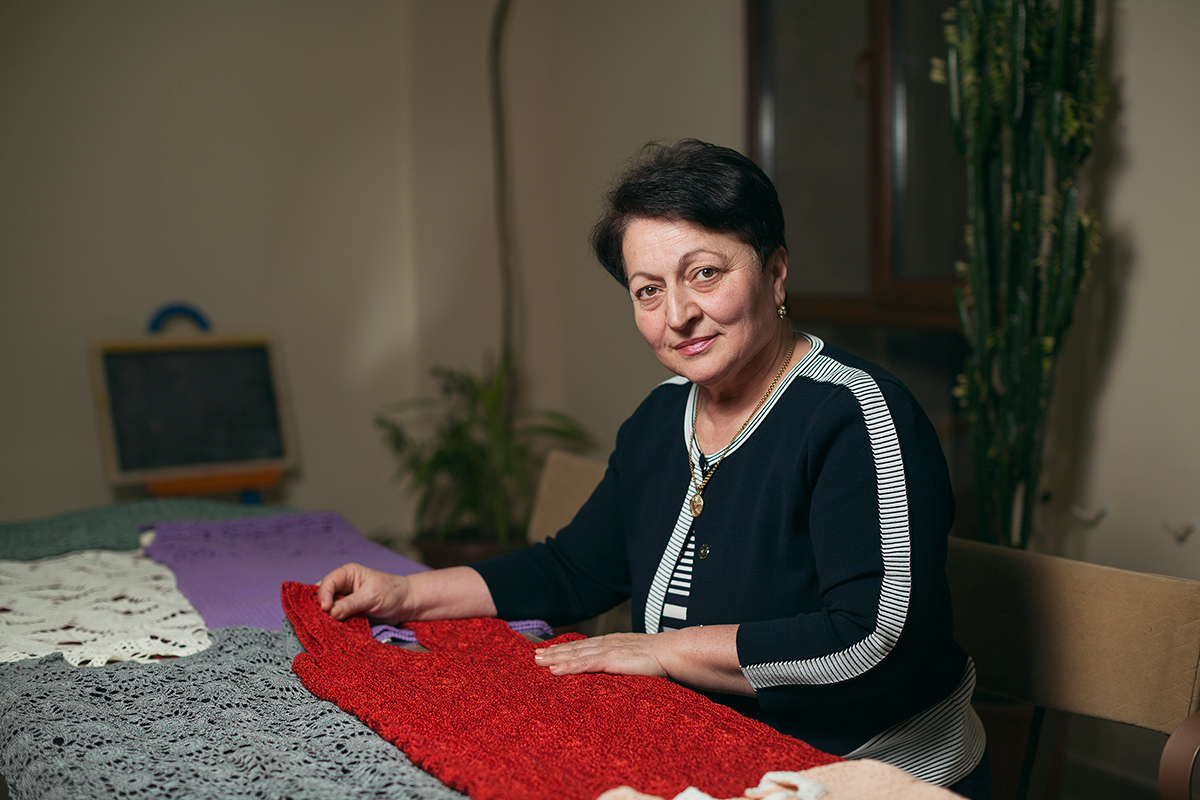 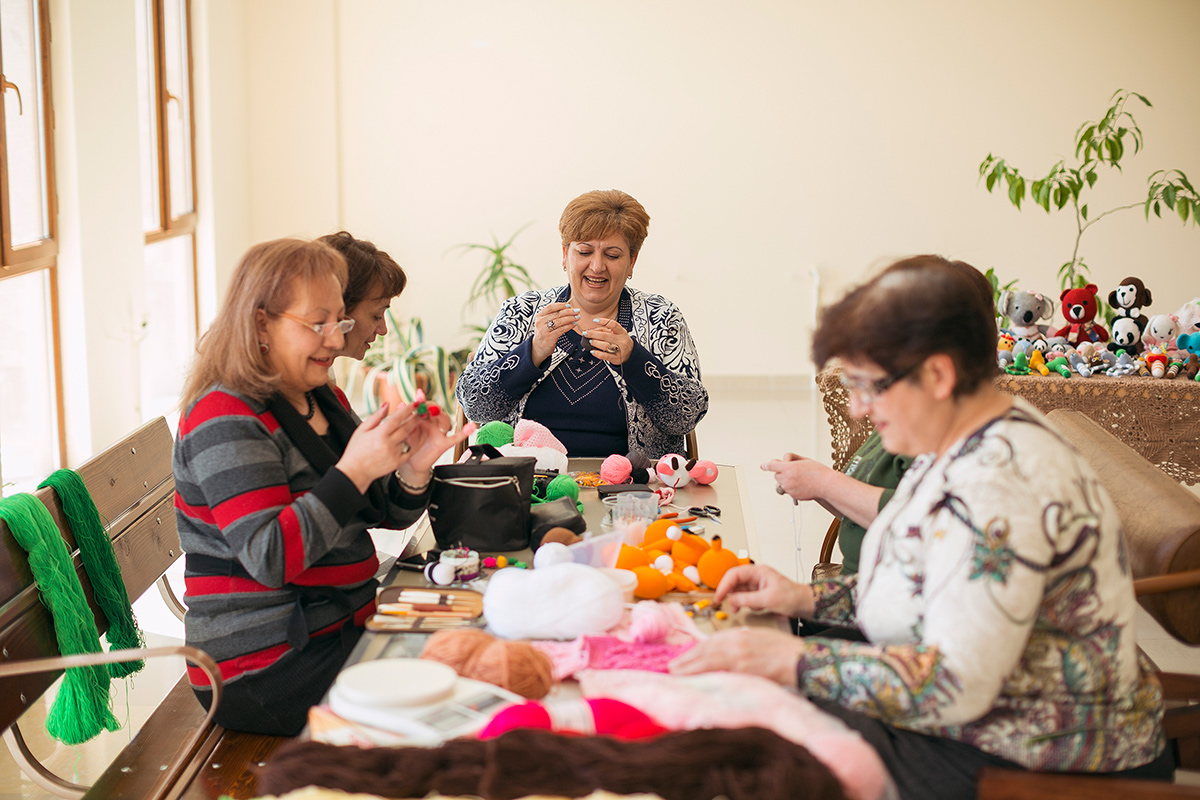 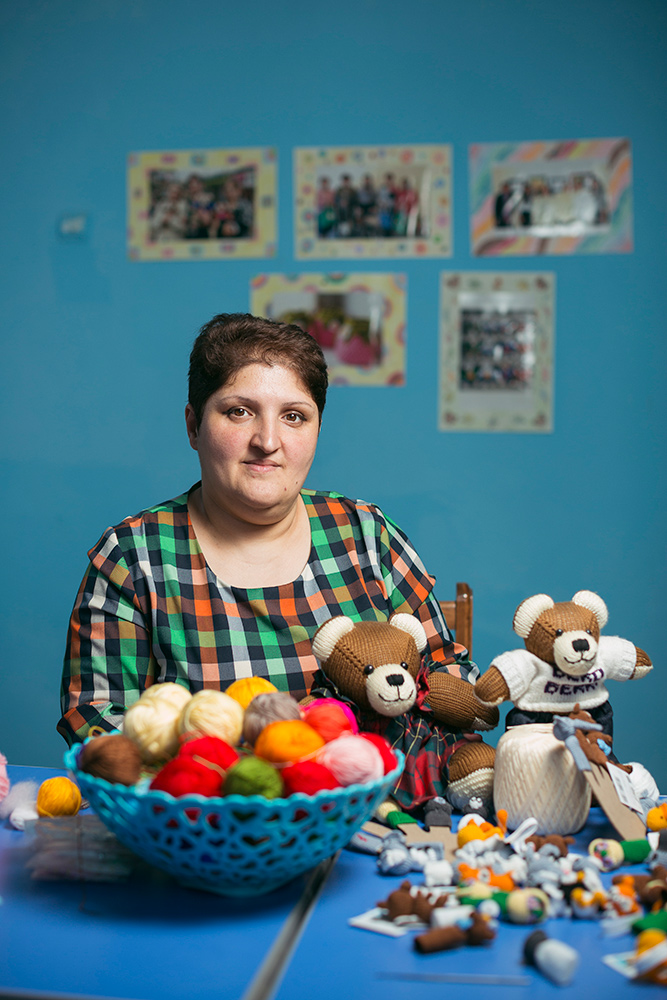 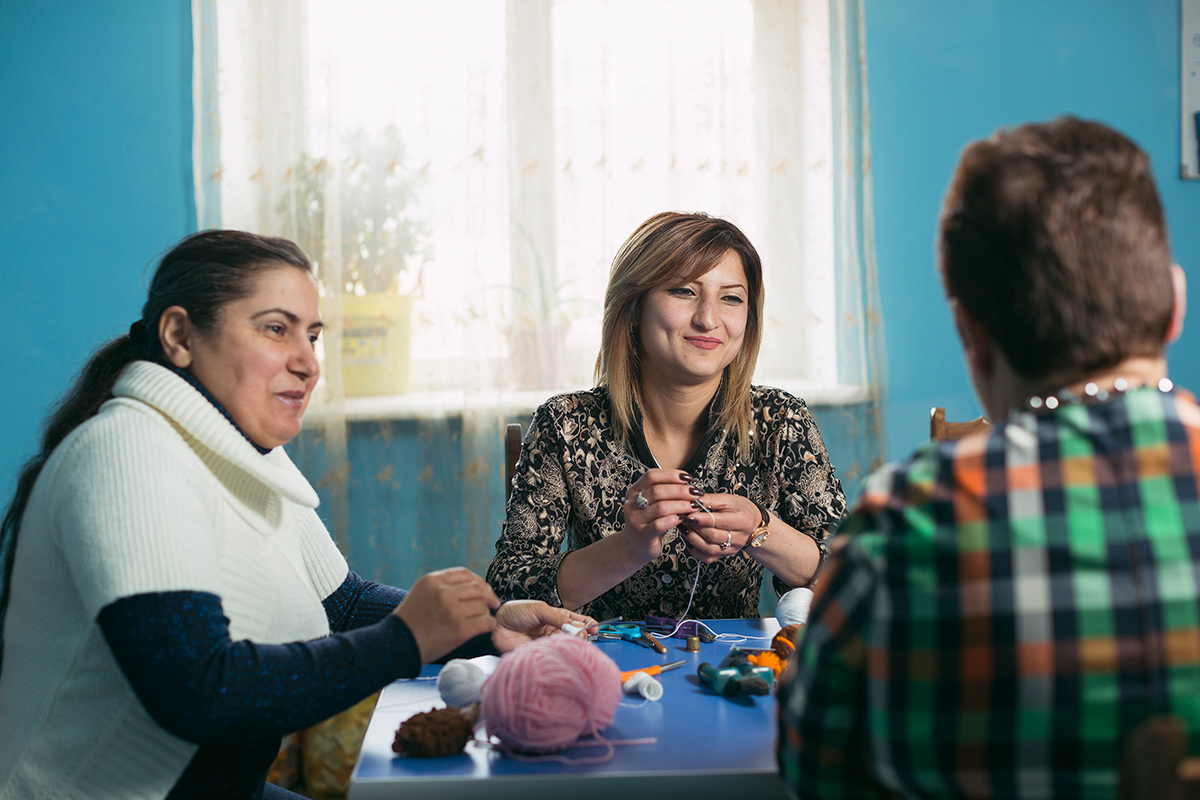 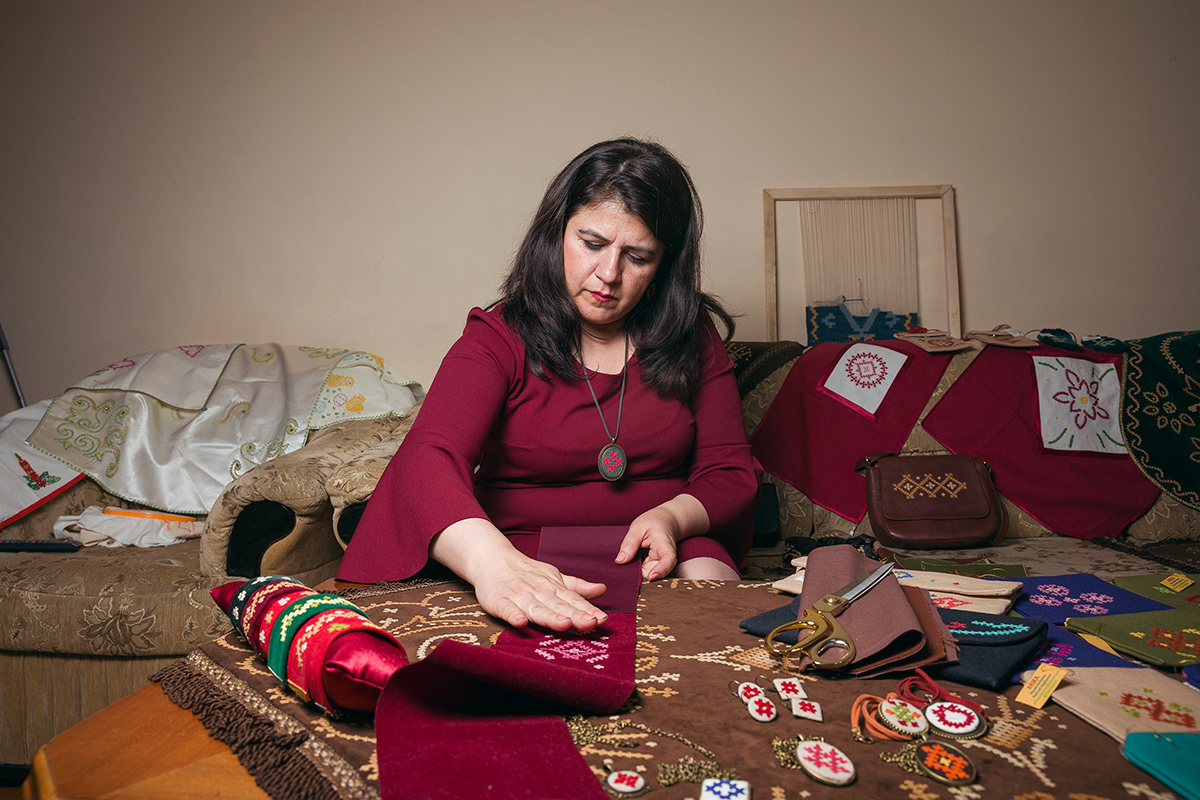 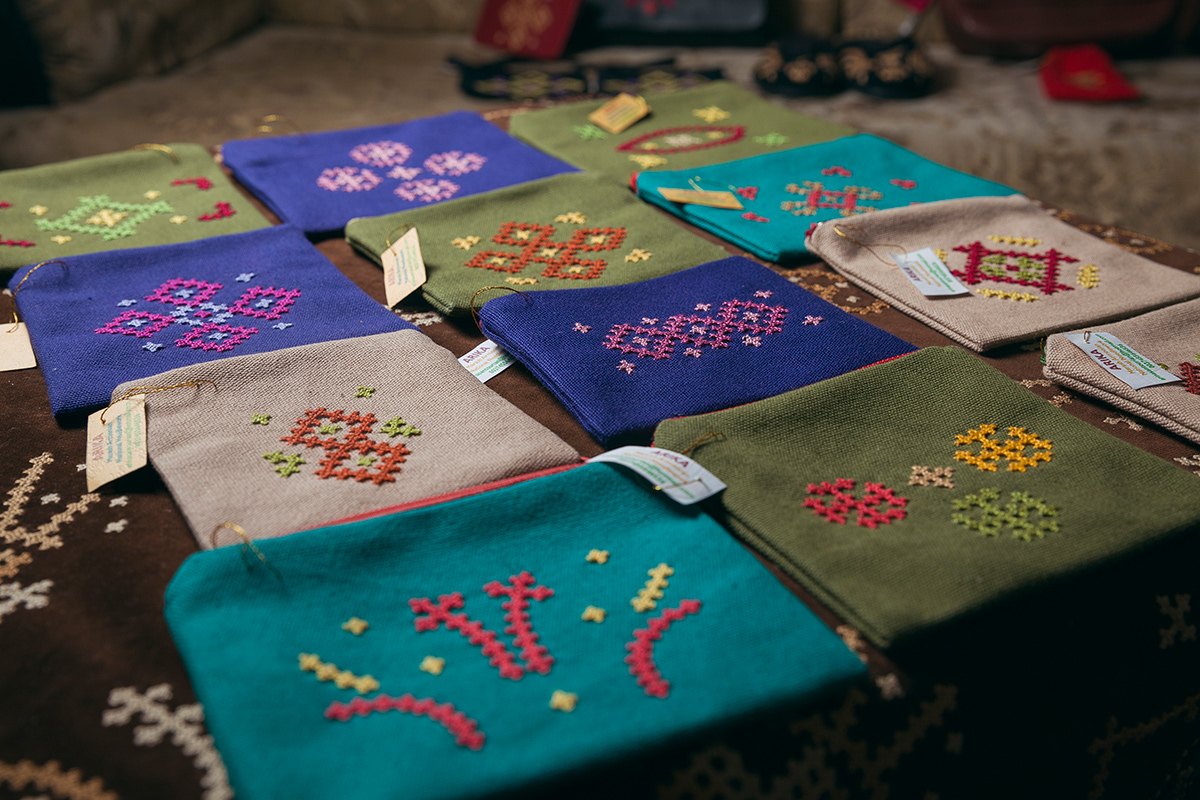 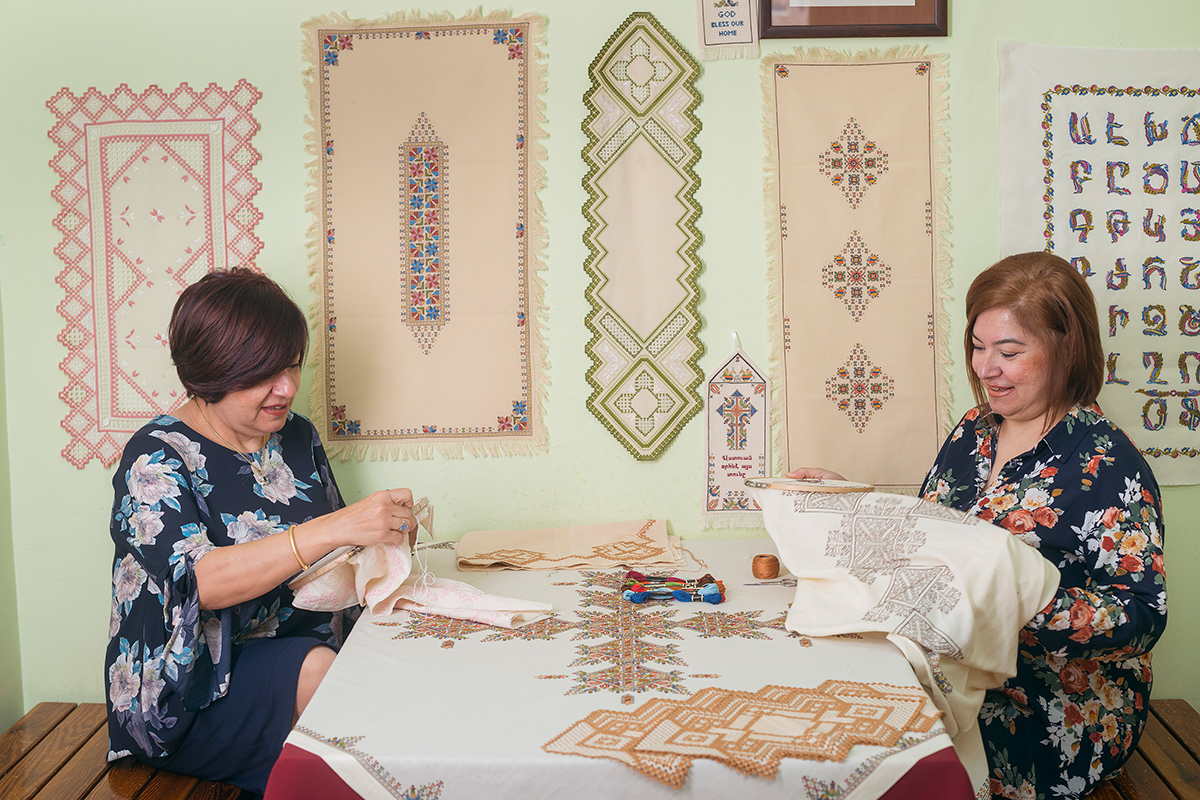 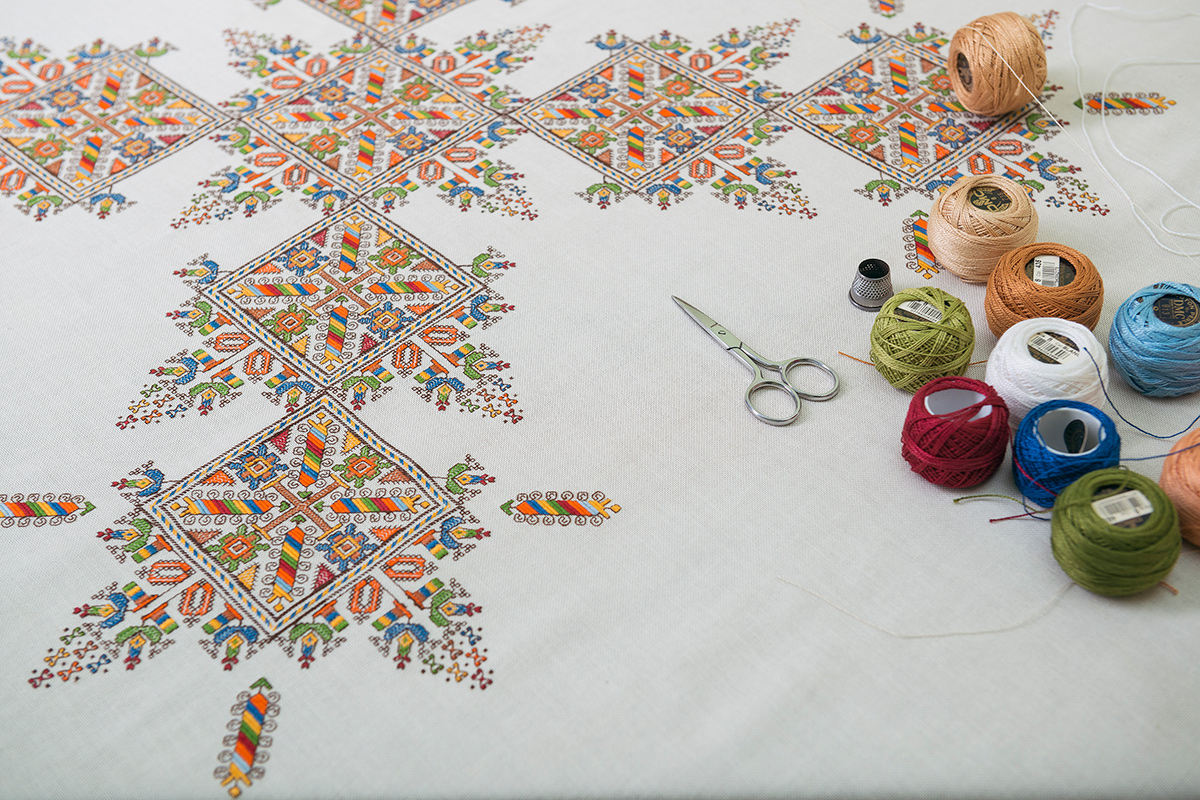 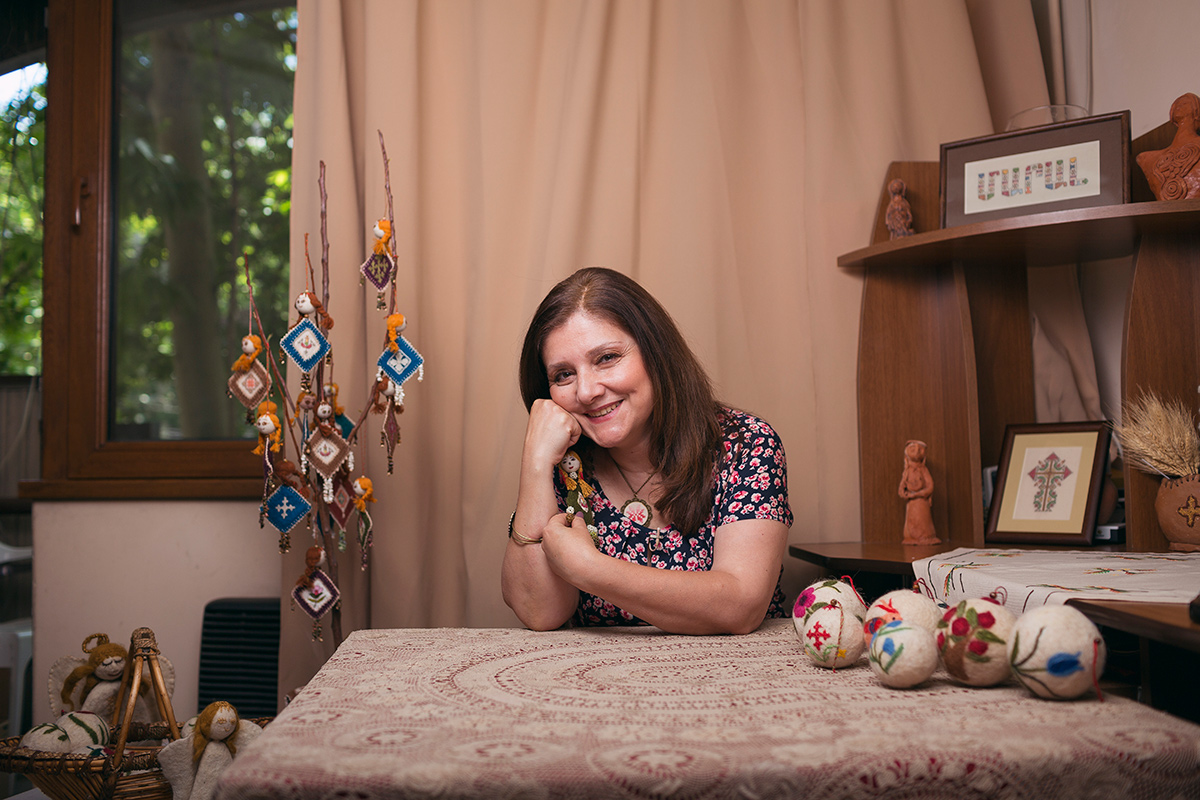 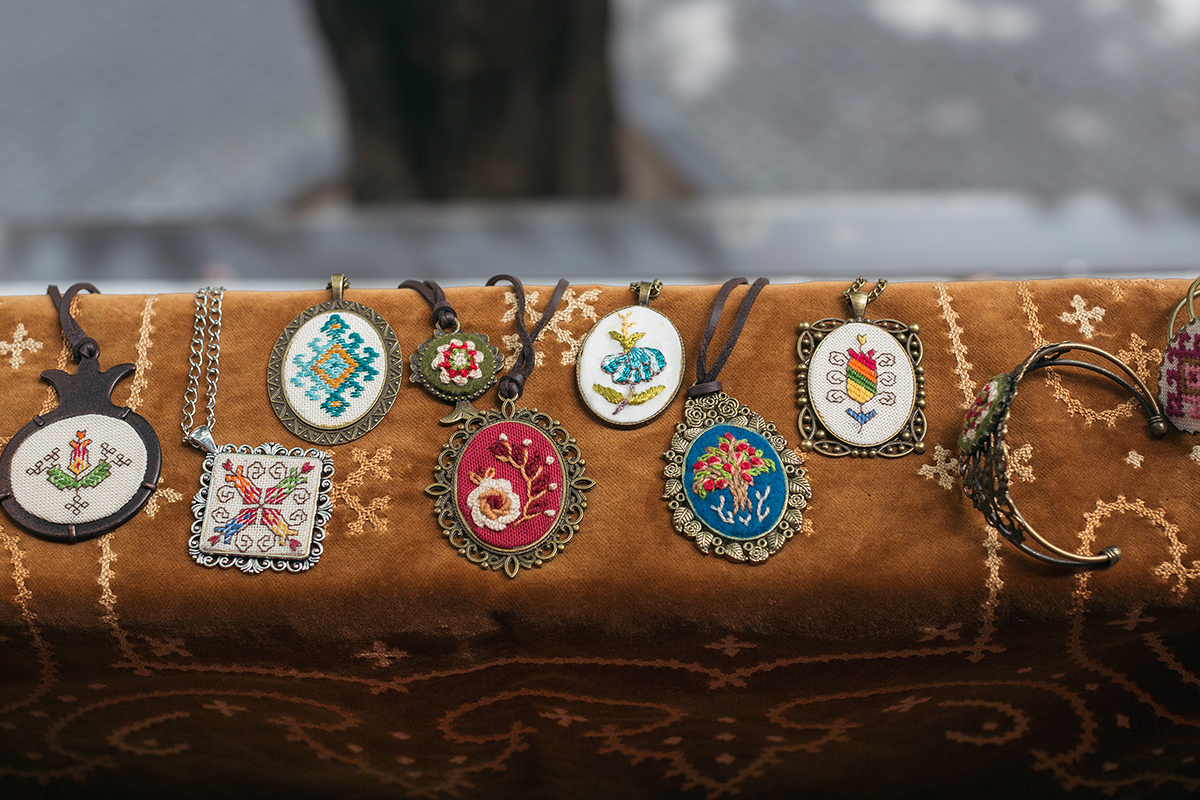 The nineteenth-century Armenian home featured an abundance of laces and embroidered textiles, especially during weddings and feasts, when families displayed their finest. Needlework was one of few forms of expression open to women in a society where they were largely without rights or prestige. It provided a “voice”: stitches, instead of words, became a language.

It also provided subsistence in hard times; women could sell their needlework for income, calling it “bread of the black days.” For many women in Western Armenia, the black days came after 1915, when their large, protective families were dispersed and often destroyed. They carried the embroidery styles of their homes to new lands. For many others, the black days were during the economic and war-related hardships of the 1990s, when women practiced needlework and crochet to make a living and keep their families warm. With the recent onset of conflict in Syria, granddaughters of the post-1915 generation have fled to Armenia and carried back their needlework. 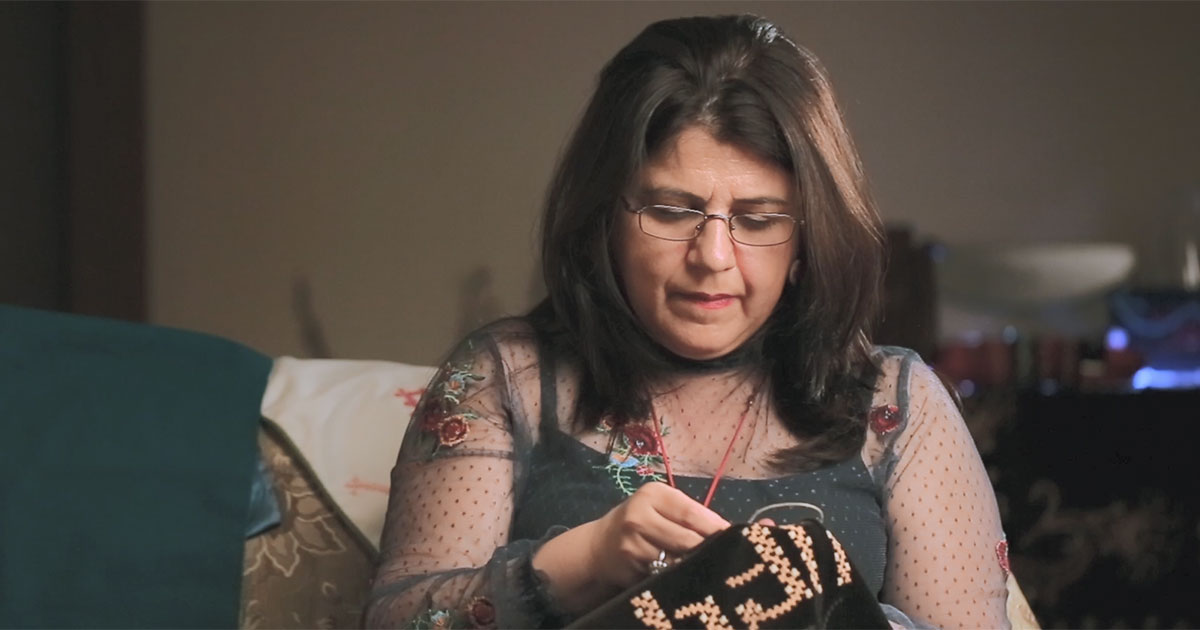 Ayda Sandurian is an embroidery master from Aleppo, Syria, who moved to Armenia in 2012. Like many of her compatriots in Aleppo, Sandurian practiced embroidery—a skill traditionally conveyed to girls by their grandmothers, mothers, or aunts—for her own pleasure, home decoration, and beautiful pieces of dowry. In Sandurian’s case, she learned from her grandmother, born in Marash but a refugee to Syria during the years of Armenian Genocide. As a master of the Marash stitch, Sandurian is well-known for her beautiful embroideries, which have been exhibited and sold at expos and festivals. These sales have helped Sandurian and many other women move from Syria to Yerevan, where they are able to reclaim their heritage and integrate into Armenian society. 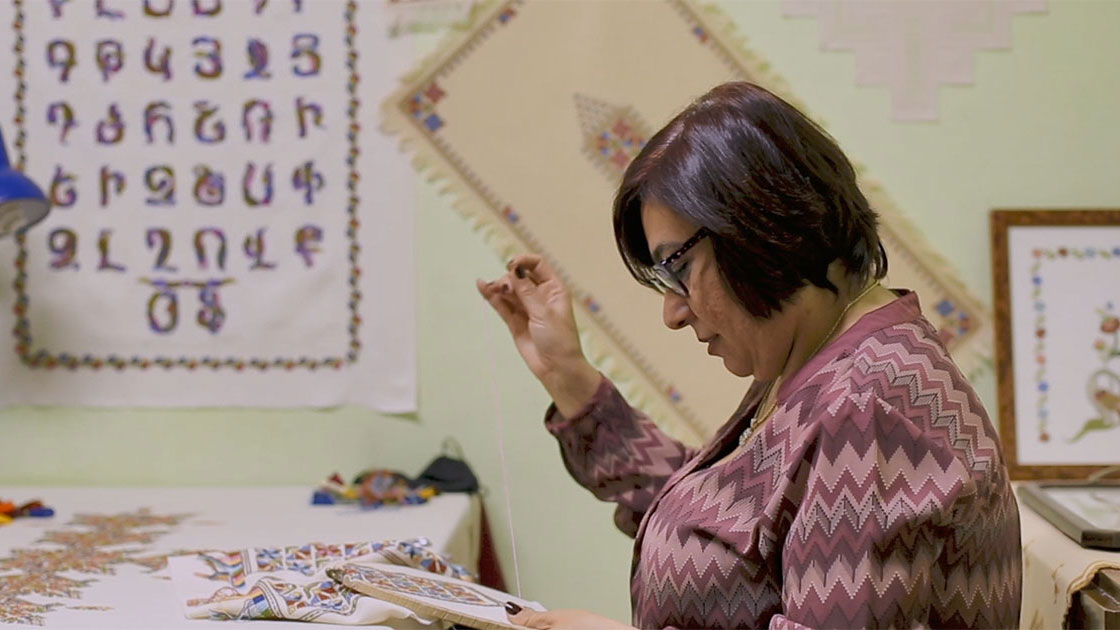 Houri Iyjian’s family moved from Aleppo, Syria, to Armenia in 2015. Their family history links to another migration in 1915—the Armenian Genocide—when their ancestors had to flee from Ayntap to find refuge in Aleppo. Apkejian and her twin sister Salbie became master embroiderers, using several of the Armenian traditional stitches—such as Marash, Svaz, Van, Ayntab, Ourfa, Tigranakert—which are named for the cities where they originated and developed.

The sisters represent the intergenerational transfer of skills, following their mother and grandmother, a well-known embroiderer, who brought orders home and taught classes. The sisters started handwork at home at the age of four or five, and later attended handwork circles based in Aleppo’s Armenian community. Guests to their home felt like they were visiting a museum. After their father was seriously injured in 2000, they increased their earnings by taking orders primarily related to dowry composition—tablecloths, bedclothes, and handkerchiefs—traditionally used by members of the Syrian Armenian community members to prepare their daughters for matrimony. 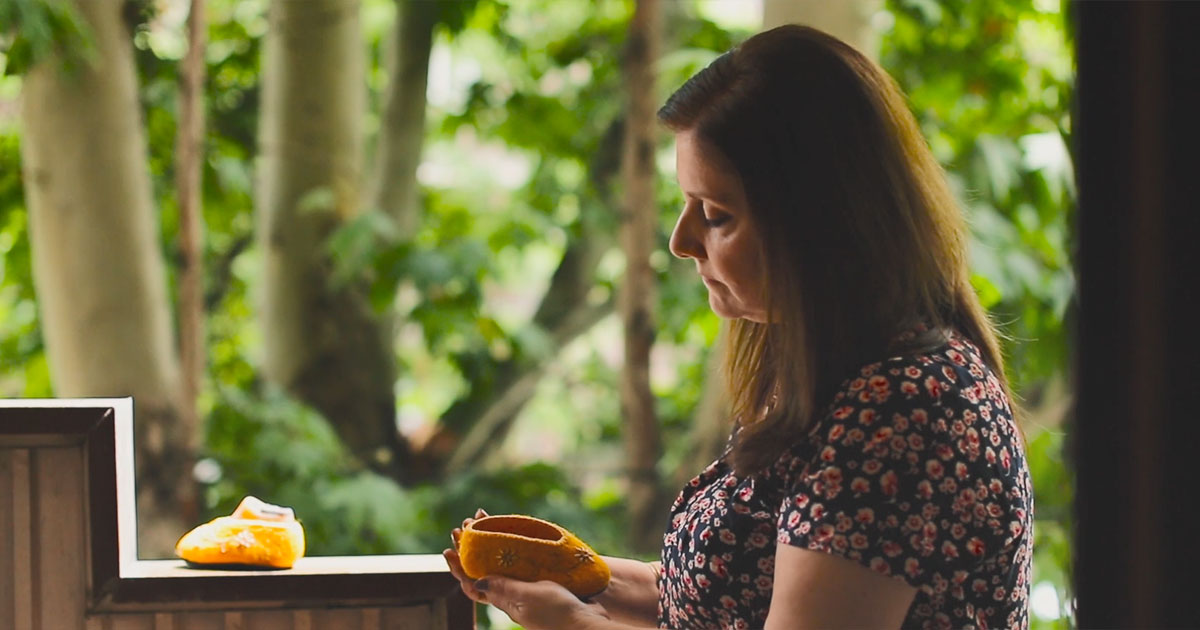 Maral Shohmahlian-Berberian is an embroidery master from Aleppo, Syria, who moved to Yerevan three years ago. She received her first instruction from her grandmother, and recalls, “I was not even able to walk, but my grandma tried to teach me embroidery skills.”In Aleppo, Sheohmelian enjoyed decorating the interior of her large home with her own pieces of craft in order, as she explained, to “change the interior decoration time by time and for each festive occasion.”

She knows the common embroideries for Armenian women in Syria—namely the Marash, Tigranakert, Svaz, Van, Malathia, Ourfa, and Ayntap stitches—and considers herself a master in Ourfa and Ayntap. She began selling her embroidery only after moving to Yerevan—using her skills to overcome the “black days.” Previously known for large pieces of embroidery, Sheohmelian now creates smaller patterns to adjust to the needs of souvenir markets. In Armenia, she also became skillful in working with felt. 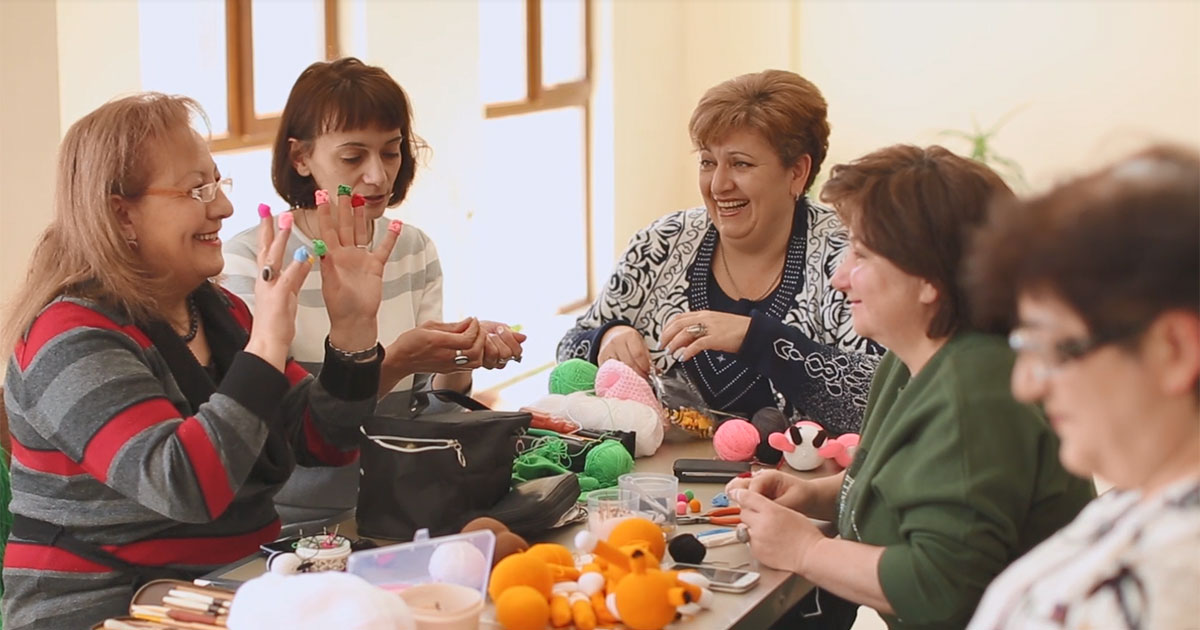 Gayane Hovsepyan has mastered the techniques of crochet, tapestry, and macramé, but crochet is her favorite. It is “like play dough for me,” she says. “I can make anything I want by crochet.” She began crocheting at age five with her grandmother, who would read fairytales and crochet at the same time. “I would listen to the tale and also watch her movements of crocheting and try it myself,” Hovsepyan recalls.

She crochets costumes, blouses, stage dresses, wedding dresses, and more, constantly enhancing her skills by tracking trends in journals and online. Her crocheting proved especially important during the “dark and cold years” following the Gyumri earthquake in 1988 and the collapse of the Soviet Union in 1991, when she weaved clothes for the entire family. Intensive crocheting also helped her overcome the sorrow of her husband’s death.

Hovsepyan recently started a social enterprise to create jobs for other women from Gyumri. Using traditional techniques and materials, they cooperate with the community organization, Homeland Development Initiative Foundation, to create wonderful crochet toys and puppets. 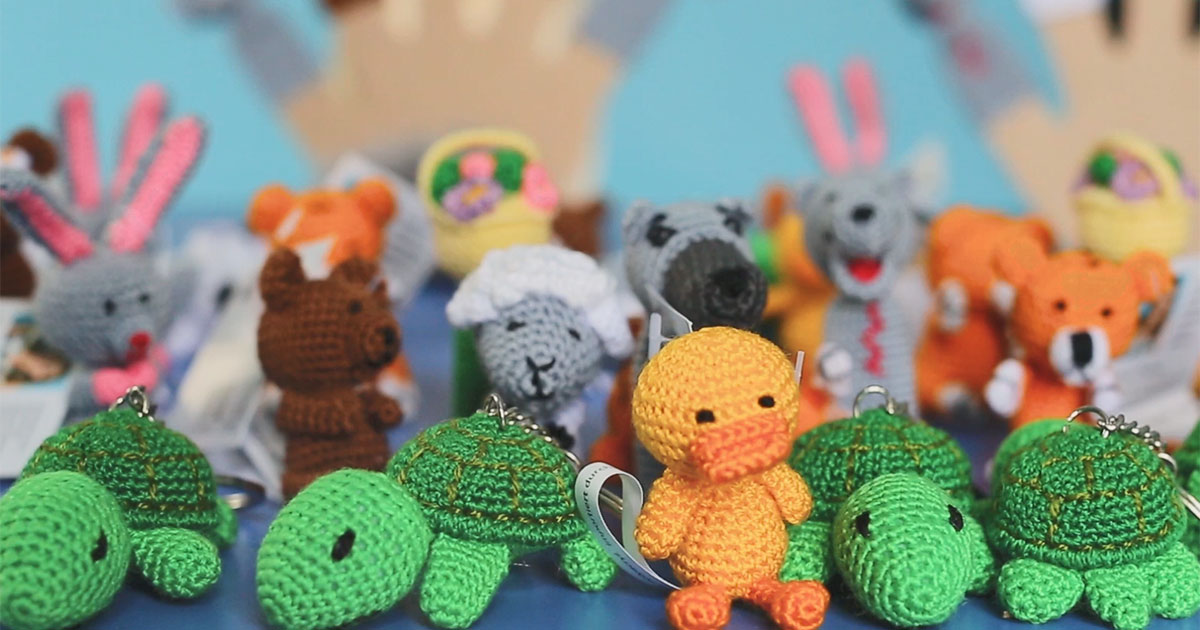 “This is crochet therapy for us. Here people are living in a continuing war situation and in chronic stress. Crochet weaving focuses the mind and the senses. You are escaping from the worries and get a chance to feel happy.”

Seda Hovakimyan is a crochet master from the small northern Armenian town of Berd. It seems that she has been knitting and crocheting her whole life—making clothes and decorative pieces for her family. She currently works with the crochet program at the Berd Women’s Resource Center, an organization developed by needlework trainers during the difficult years following the collapse of Soviet Union. Impressed by the knitting and needlework skills of the women in Berd, a German Christian missioner named Sister Hanna taught new crochet techniques here as part of her missionary work.

Hovakimyan was among the first who supported the initiative and since then has made hundreds of crochet bears, bees, and other pieces for children around the world. Hovakimyan enjoys the challenge of creating new images, such as animated characters. Throughout the Festival, her crochet skills enlivened the Tree of Life. 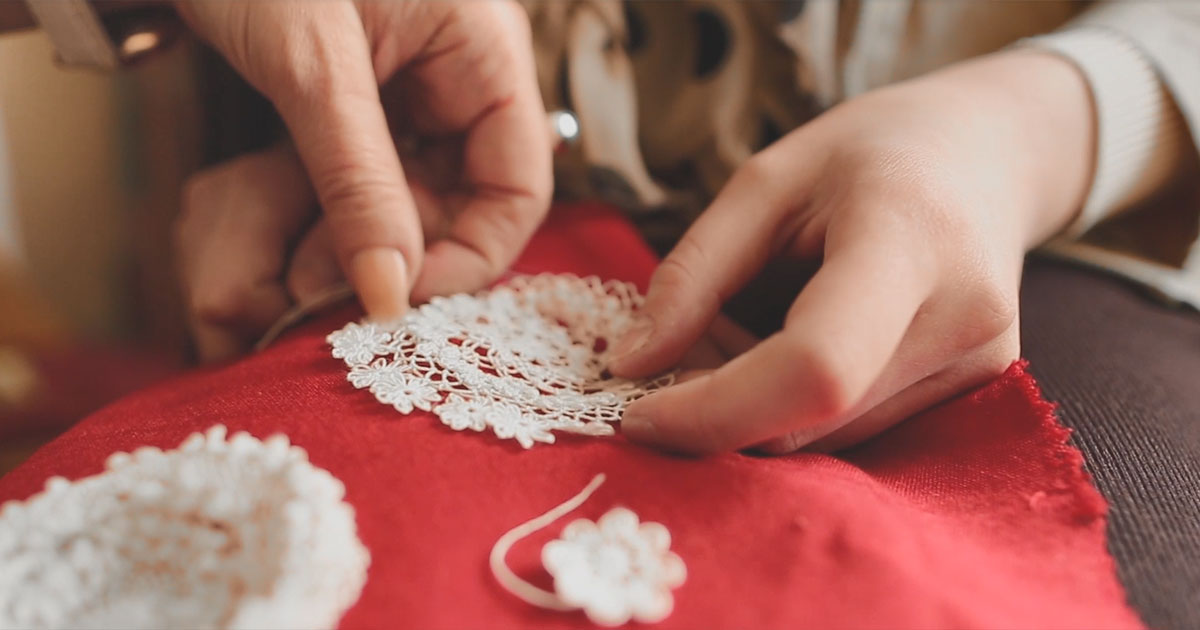 Since 1998, Armine Poghosyan, a lace maker from Dilijan, has shared her skills and knowledge with the students of the Dilijan Children’s Art School. Poghosyan herself studied lacework at the same school. Her love and passion for lacemaking derive in part from her mother, a relative of Serik Davtyan, a prominent Armenian researcher, promoter, and teacher of traditional needlework. Another inspiration since fifth grade was Comrade Nushik, a teacher at the art school.

Poghosyan enjoys lacemaking “especially for its possibility of creating a beautiful thing out of few materials (it is only thread and a thin needle) and you as an artist have much to say, a message to share.”  She also highlights the connectedness of traditional lacework to other types of traditional crafts: “A cross-stone could be the inspiration, and a specific lacework may remind you of a cross-stone.” The creation of beautiful lace requires patience, consistency, flexibility, imagination, sense of symmetry, and sense of size.

She explains, “It does not need a sketch. You need to know the technique first, then you elaborate the ornament while doing it. It is quite similar to a circle dance; it starts and you never know at what point it will join to anything else, what continuation it will have.”