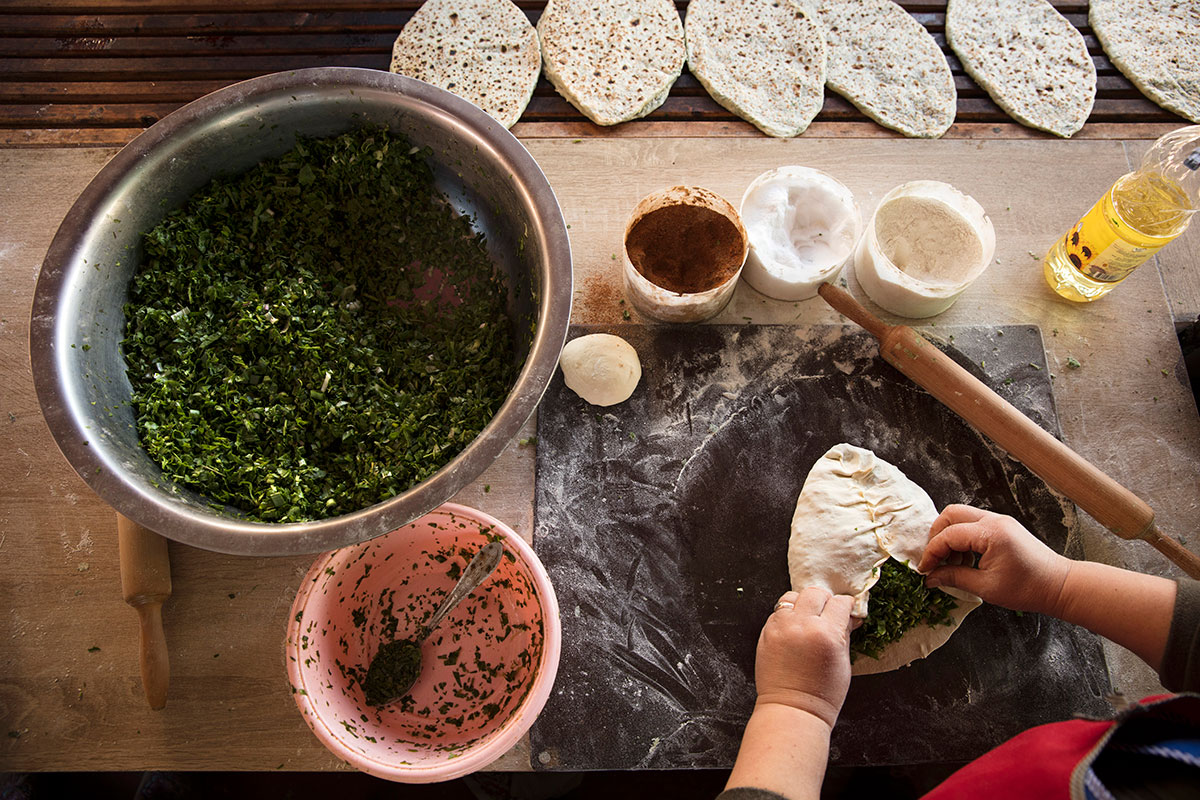 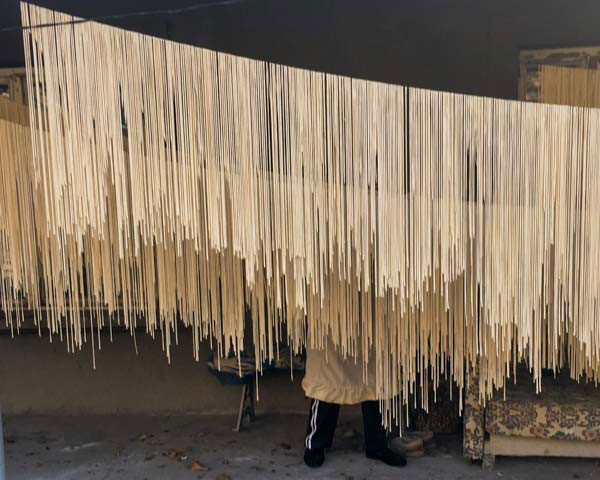 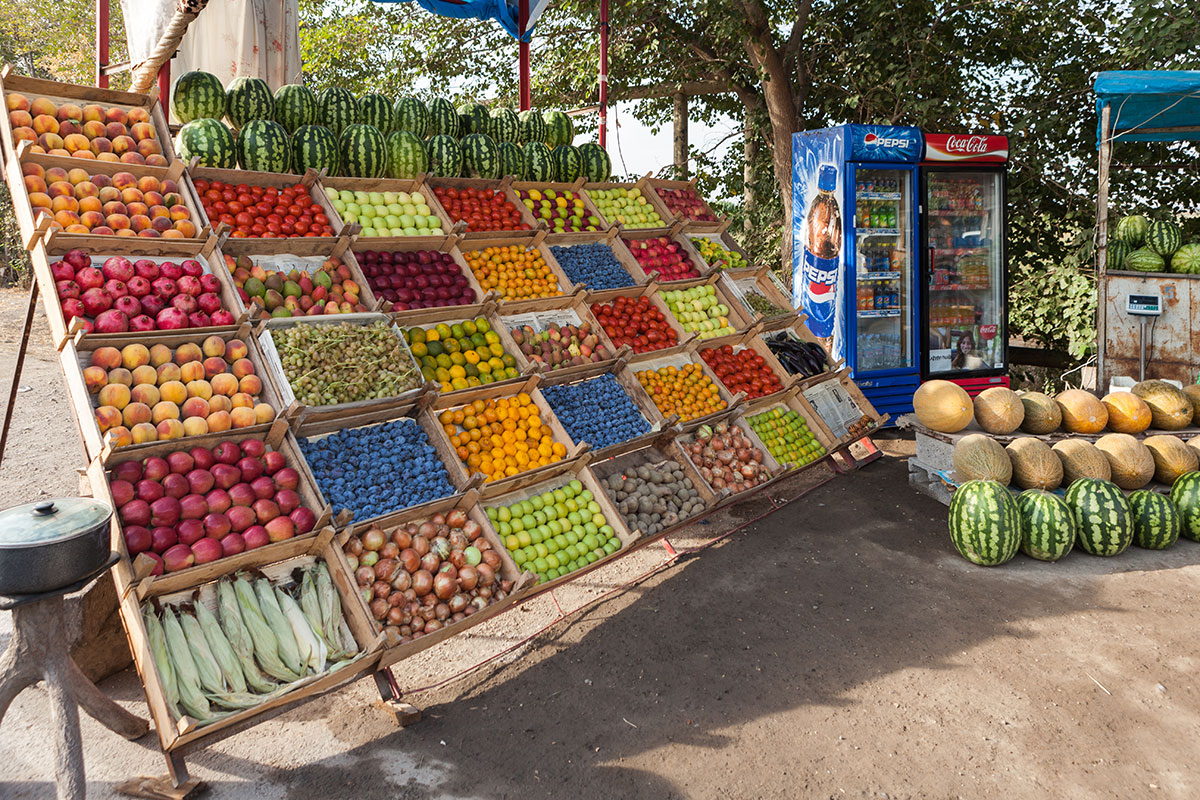 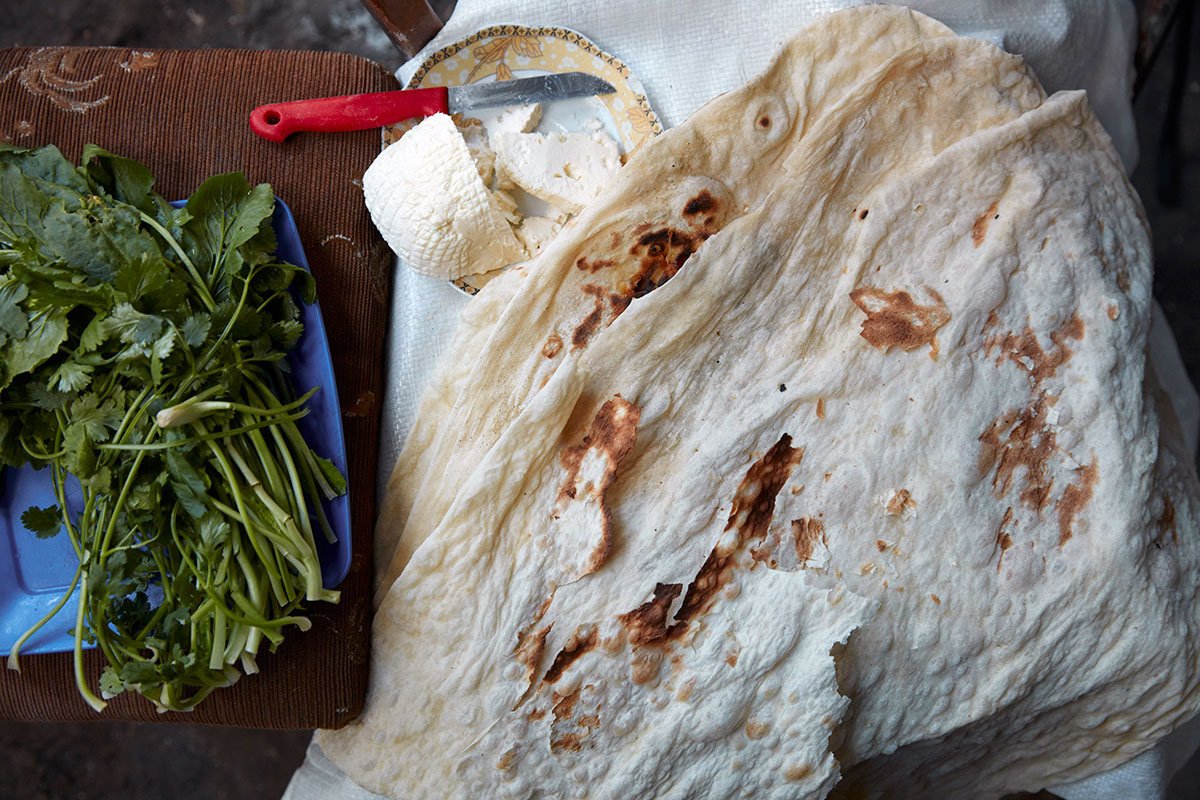 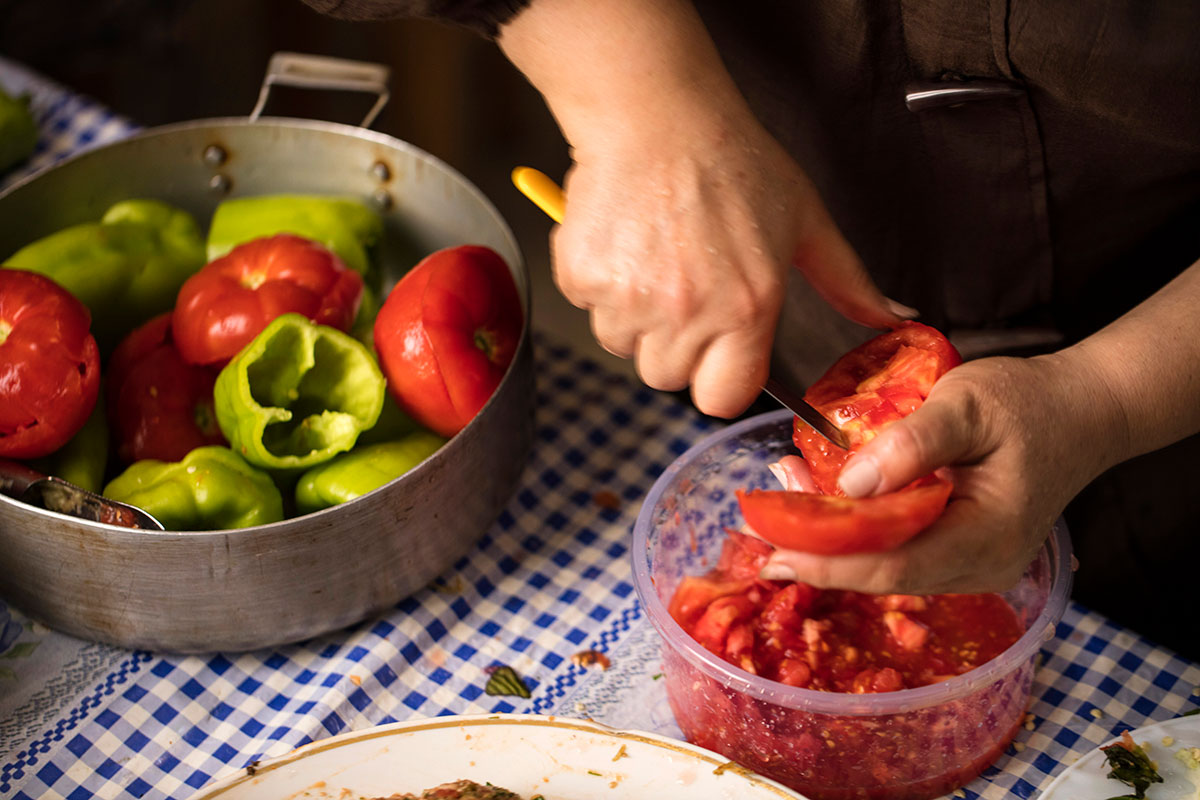 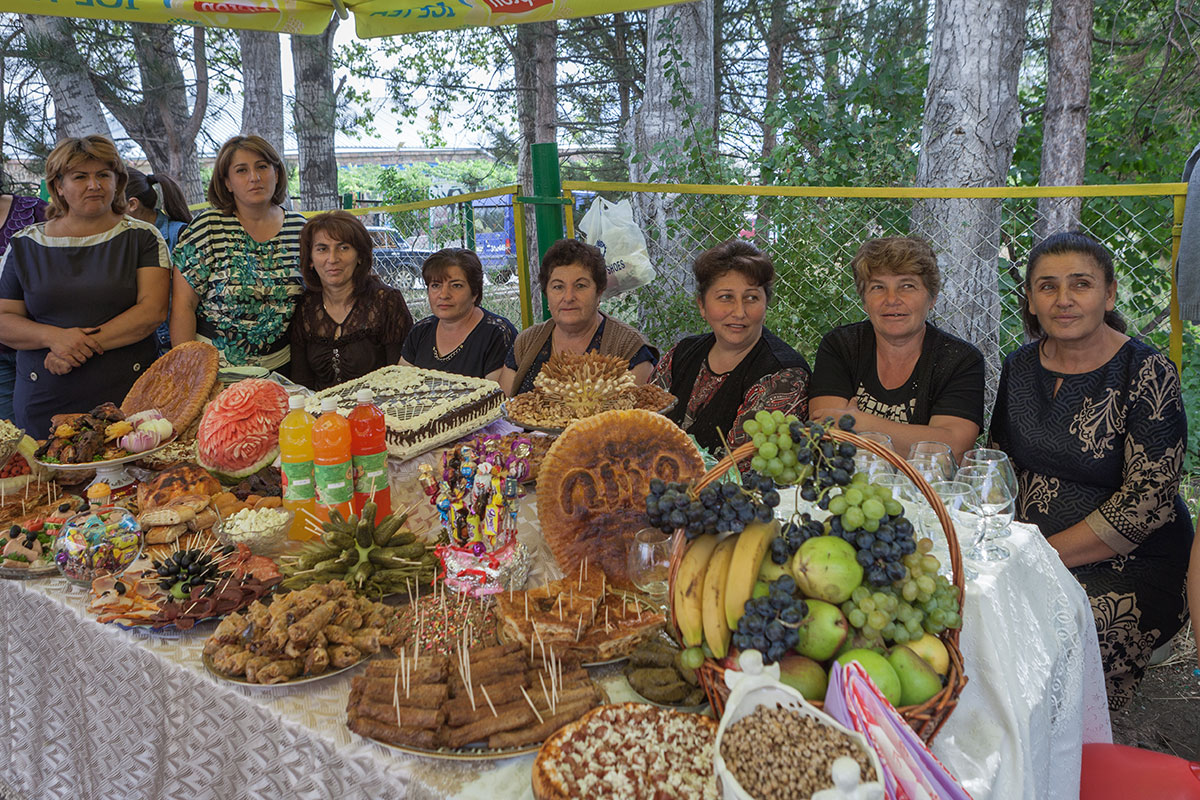 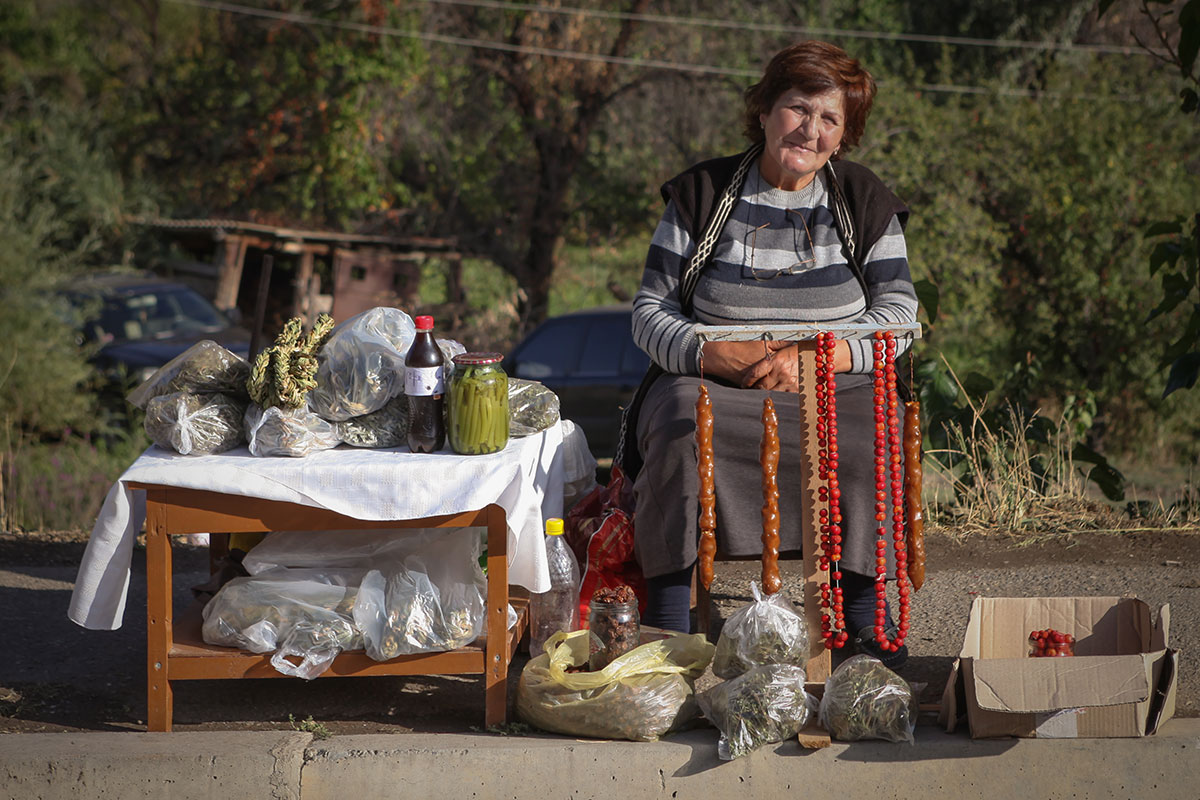 Stuffed with more than twenty different kinds of wild greens, jingalov hats is a flatbread from Armenia’s southern mountainous region.
Photo by John Lee
Women prepare arishta, a hand-pulled pasta, and hang the long noodles on a line to dry.
Photo by Kate Leahy
A roadside stand in Ararat Valley shows produce at its peak, where passersby stock up before returning to Yerevan.
Photo by Sossi Madzounian, Smithsonian
Fresh farm cheese and herbs wrapped with thin lavash bread: a perfect snack.
Photo by John Lee
Preparation of summer tolma, a twist on the traditional grape leaf version that puts the filling into seasonal summer vegetables.
Photo by John Lee
Women from Areni village sell pastry and cakes at the annual Areni Wine Festival.
Photo by Sossi Madzounian, Smithsonian
Farmers and villagers alike set up stalls along the road to sell their wares. This woman is selling bags of dried aveluk (wild sorrel) and sujukh, a sweet made from walnuts dipped into grape or mulberry syrup.
Photo by Sossi Madzounian, Smithsonian

What is Armenian food? As Liana Aghajanian explains in her article for Anthony Bourdain’s Parts Unknown: Armenia, it depends on whom you ask. Food traditions are deeply influenced not only by culture, but by place. Within the current political boundaries of Armenia, food is greatly influenced by the landscape and seasons, as well as the Soviet past. For Armenian Diaspora, many of whose family histories trace back to the Ottoman Empire and forced migration to Lebanon, Syria, and other places in the Middle East, food traditions are quite different.

For as long as they have lived in the country’s highlands, Armenians have harvested the indigenous edible plants, transforming them into cherished dishes. The high mineral content of Armenia’s soil, a result of centuries of volcanic ash, makes the country a botanist’s dream. Every year, locals pick countless plant species from the mountains and hillsides. Novel to foreign tongues—both in pronunciation and palate—many of them form the backbone of signature traditional recipes.

The deep ecological knowledge of foraging is transmitted orally, from generation to generation, and is specialized to the surrounding landscape of each village. Locals can often look toward cliffs, mountainsides, and forests and identify what edible plants are growing by the green shades of foliage. There is a high demand for foraged food in Armenia, which has increased both the commercial and social value of the tradition.

“A summer thorn is winter sweet”

As urbanized, global life provides for convenience and omnipresent fruits and vegetables, the majority of Armenians appreciate seasonality. As winter winds down, excitement builds toward spring and summer to taste “real” strawberries, apricots, or mulberries or other naturally grown fruits and vegetables in their seasonal prime. Winter is usually harsh in Armenia, and traditional techniques and strategies of food preservation are still in use—even in urban areas and as modern refrigeration and freezing are ubiquitous.

To ensure a sustainable, balanced, and abundant year-round food supply, home cooks throughout the country dry wild greens, herbs, and fruits; pickle large amounts cabbage and cucumber; use fermentation for home cheese making; and salt-cure meat and fish. During the Soviet period, home canning gained popularity, and the tradition continues today. Each year women throughout the country prepare dozens of jars of vegetable spreads, jams, compotes, and juices, storing them neatly in cellars.

Food is the focal point of most Armenian feasts and celebrations, honoring or commemorating a special event or person by organizing a joyful gathering. The menu of a feast differs from daily meals by ingredients, cooking techniques, and serving etiquette. Traditionally, certain foods had symbolic meanings linked to celebrations and rituals: the mix of grains to celebrate a baby’s first tooth, draping lavash on the shoulders of a newly married couple and making an offering of honey, or ensuring food abundance for the celebration during the New Year feast. Feasting food also sends a message about the social capital and status of the host.

Khorovats, or meat cooked on an open fire, is the foundation of the feast, with the smell of its preparation signaling the beginning of a joyful event. Different dishes such as tolma, qyufta, salads, appetizers, sweets, fruits, and drinks quickly follow. Loading the feasting table guarantees a long lasting social gathering and helps the feast to accomplish its goal: sustaining family and social ties, boundaries, and behavioral norms.

Sun-dried fruits and honey traditionally satisfied a sweet tooth, and these items persist in abundance today. Visitors to monasteries and other tourist sites around the country can admire and taste a colorful bounty of fruits dried under the sun. Grape and mulberry syrups are used for health benefits, as well as for making a traditional sweet from nuts called sujukh. In the regions with significant fruit harvests, fruit leathers are used as a spice, a folk remedy for sore throat, and to make rolls with nuts and honey.

The simplicity of ingredients in Armenian baking sharply contrasts with their often complicated preparation. With the introduction and widespread availability of sugar, baking of sweet pastries and cookies flourished. Women usually do the baking, making traditional pastries at home—including gata, pies, and Soviet-style and modern cakes with fanciful names like “Napoleon,” “Mikado,” or even “Dream of Men.”  Whether as dried fruits or baked goods, sweets are consumed daily, and special recipes are prepared for feasting and holiday events.

Gayane Khatchatryan lives in Jrarat, a village in Shirak region in the northwest of Armenia that is famous for its artisanal cheese-making traditions, particularly chechil, or string cheese. For more than twenty-five years, Khatchatryan has been making this cheese both for home use and to sell. She learned the technique from her grandmother and mother, and began helping her mother to prepare cheese when she was ten years old. Her knowledge and skill attest to her title as a cheese-making master.

“I am still wondering—what’s the reason that I continue to prepare pakhlava when it is so time consuming? Then, I was thinking that pakhlava is always associated with my childhood and usually people bake pakhlava for some joyful and good events, such as New Year, weddings. Also, it always gave me the illusion of prosperity, because you need to be wealthy to bake pakhlava as it requires most expensive products such as walnut, ghee, honey…”

Hasmik Khatchatryan prepares pakhlava and gata with a famous recipe from the Gavar region where she is from. She supplies pastries to small shops and supermarkets in Yerevan and even individual customers from her small patisserie. She honed her cooking skills as the sole cook for her large family. A survivor of domestic abuse, she drew on these skills to build her confidence and a livelihood through her pastry business.

In 2014, Syrian Armenian chef Andranig Kilislian and his family moved to from Aleppo to Yerevan to escape the Syrian Civil War. This shift mirrors the history of Kilislian’s grandparents who arrived in Aleppo after fleeing the Ottoman Empire in the early 1920s.

In Yerevan, Kilislian’s family is continuing their traditions in food enterprise, carrying on the recipes and flavors of his grandfather’s sujukh and lahmajoun (“Armenian pizza”). Kilislian joins a wave of Syrian Armenian chefs whose dishes are spicing up the local food in Armenia, adding new flavors to local tastes.