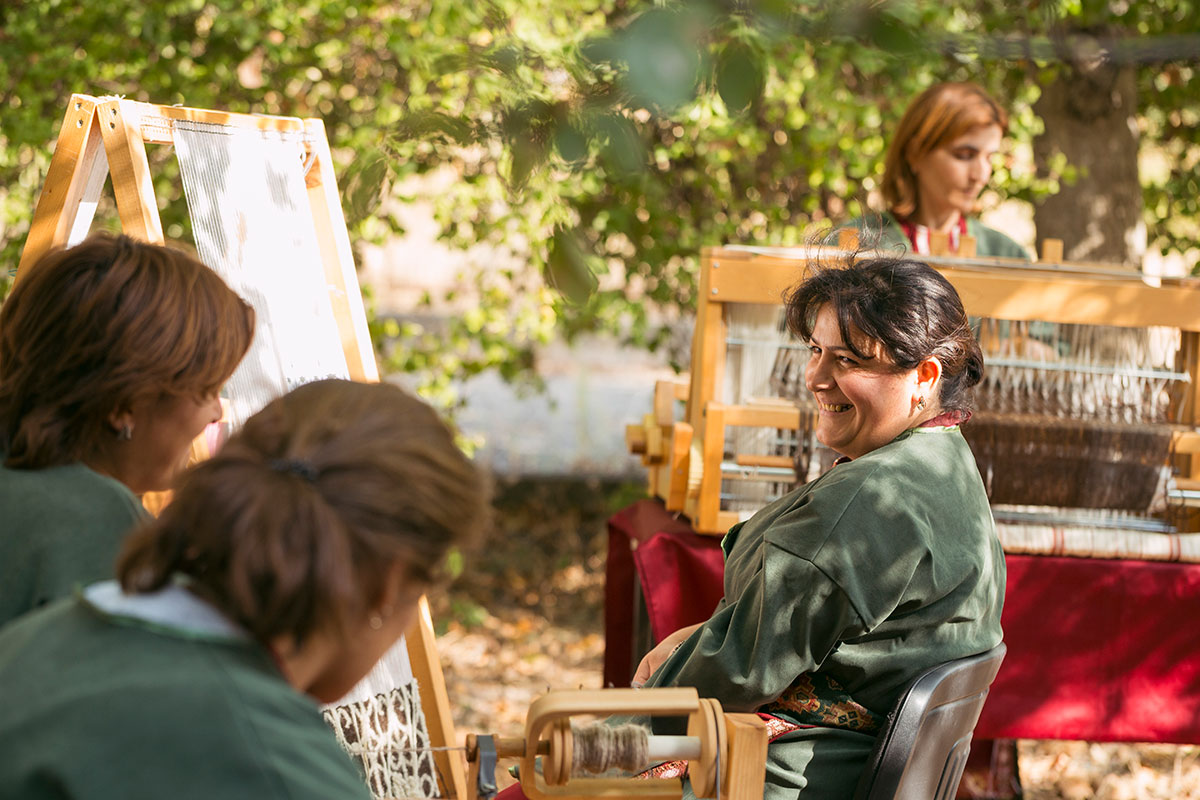 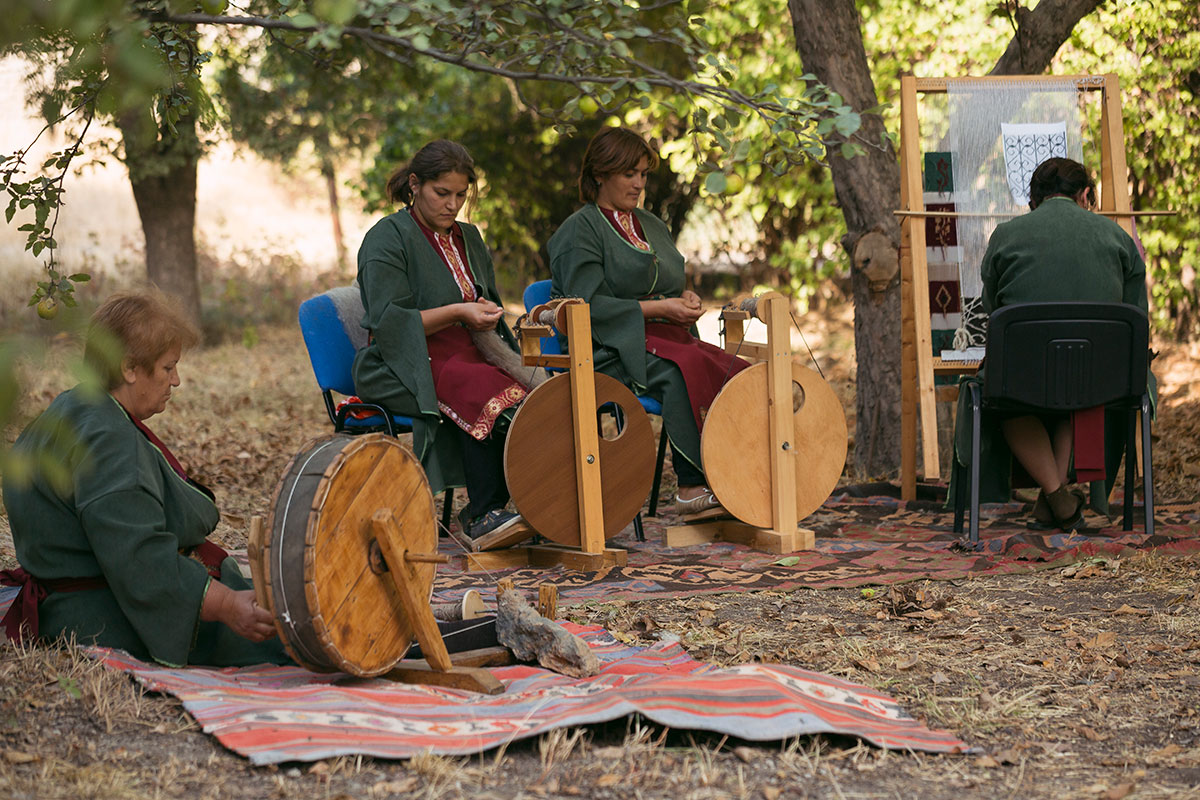 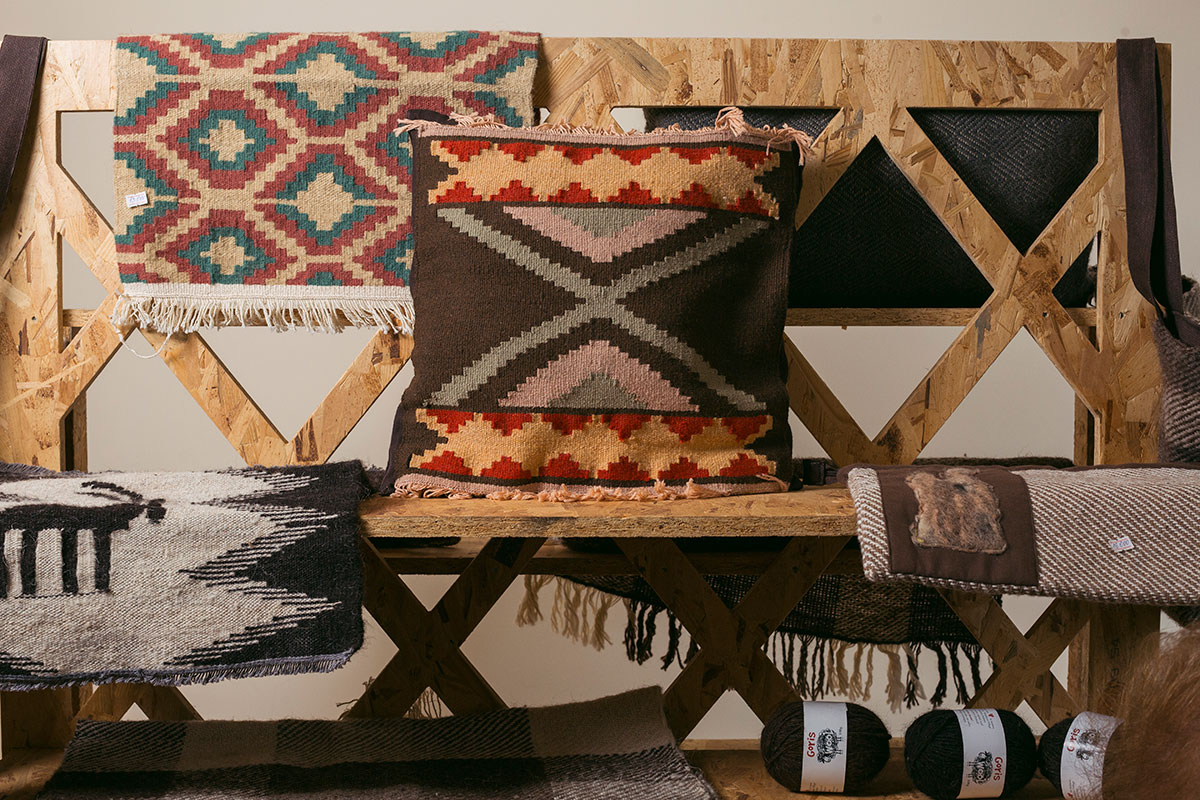 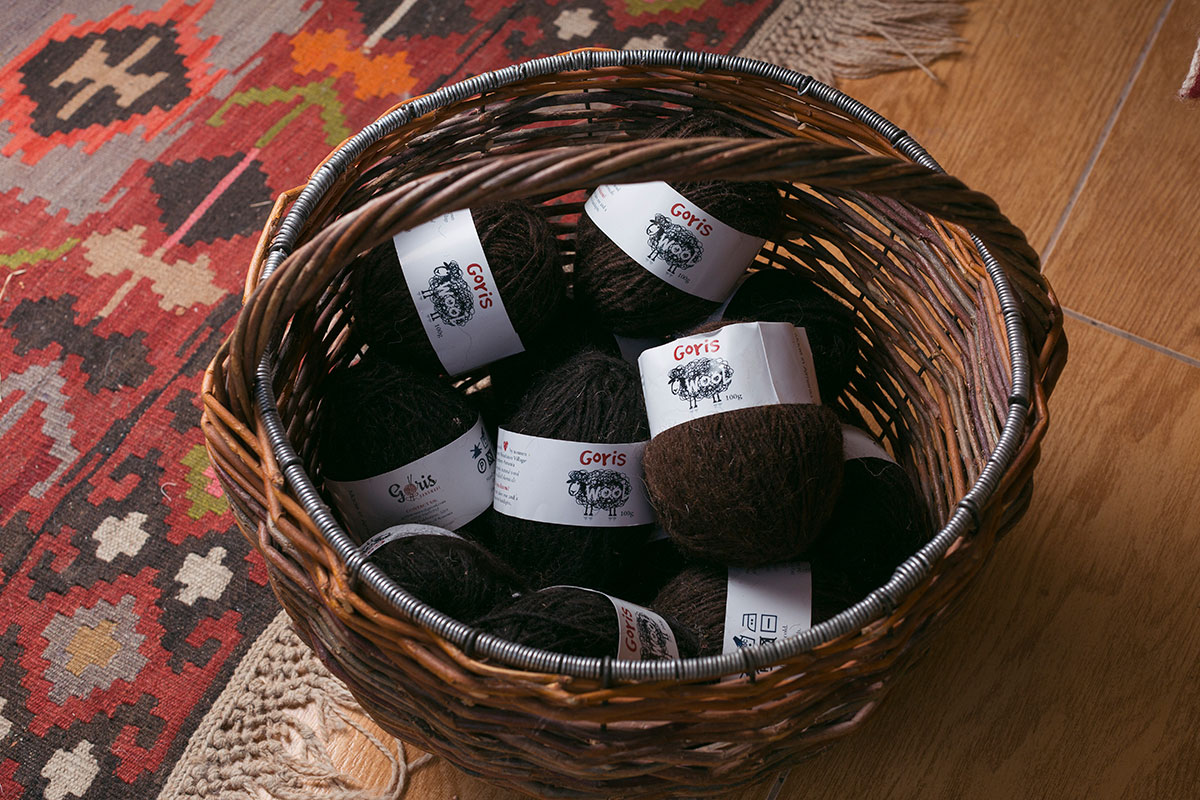 Within the territory of historical Armenia, burial sites and dwellings have yielded rug fragments dating from the late second and early first millennia BCE. Greek and Roman historians—such as Herodotus, Xenophon, Strabo, and Tacitus—mentioned Armenian rug weaving. However, it was not until the Middle Ages that Armenian rugs achieved widespread fame, largely due to the weavers’ migrations throughout the Middle East and Europe. As a result, European artists—including Hans Holbein and Hans Memling—depicted these rugs in their paintings, which brought the rugs to an even greater audience.

One of the most characteristic of the earliest surviving rugs is the vishapagorg (dragon-rug), a design traced back to the fifteenth century, which later developed into distinctive regional styles and is still popular among modern weavers, including those at the Folklife Festival.

In the nineteenth century, Armenian women commonly practiced rug weaving—seen as pious work—especially in the villages, where every home contained a weaving loom. Rugs and karpets (flat-woven carpets without a pile) involve different weaving techniques, but could be woven on the same loom.

Guhar, the weaver of a famous seventeenth-century rug, wrote about her work: “I, Guhar, full of sin, sick at heart, have woven this with my unskillful hands. Whoever reads this, let them bless me at least once.” Nevertheless, because rug weaving was so difficult, a legend spread that traces its origins back to Satan, who allegedly introduced this complicated craft in order to be remembered always.

In the late nineteenth and early twentieth centuries, production centers for rug weaving emerged in towns with sizable Armenian populations, both in the Russian and Ottoman empires. However, these rich traditions rapidly declined by World War I. During the Soviet period, Armenians revived and industrialized rug production through a web of cooperatives and, in 1963, the state-controlled Haygorg (Armenian rug) production unit. In the post-Soviet period, many traditional handmade carpets scattered from Armenia into private collections.

Today a promising new revival of rug weaving is under way, as demonstrated by Folklife Festival participants.

“Carpet weaving is not a craft but art for us, because we are creating via weaving.”

At twenty-three years old, twin sisters Sahkanush and Haykanush Stepanyan are passionate about their work. After learning handmade rug knotting and carpet weaving techniques at the Gyumri craft center in their teens, they began work at Tufenkian Artisanal Carpets, a private company that invests in the production and sales of Armenian handmade carpets. They greatly value the approach of Tufenkian, which cherishes and respects the ancient art of carpet making while maintaining a contemporary sensibility.

Rugs are created by hand-carding, hand-spinning, hand-knotting, and hand-dying the finest wools. “The work is really very hard, though I am becoming more harmonic,” Haykanush explains. A single nine-by-twelve-foot Tufenkian rug consists of up to 1.5 million individual knots that are hand-tied knots and artfully assembled.

“I like the voice of silk when making the carpet knot and the crunching of loom tiles that seems to be music, and do not like at all when you have to beat a fine silk with a metal comb.”

Twenty-three-year-old Diana Hovhannisyan is among the pioneers who “survived” the rigorous training in silk carpet weaving sponsored by the Armenian Folk Arts HUB Foundation in 2016 in Yerevan. For ten consecutive days, the renowned silk rug weaver Avak Shirinian from Istanbul shared his knowledge and skills with three young women, teaching them the challenges and magic of traditional silk weaving. Due to the extreme delicacy of silk, the work is difficult and slow. Only those with high levels of patience and dedication, such as Hovhannisyan, may succeed.

As a master’s student in art, Hovhannisyan understands the relationship between the techniques she has learned and her research on Armenian carpet weaving traditions: “I was always reading about the Armenian double knot, but it was never clear to me what it was, until I tried it myself.” At the Festival, Hovhannisyan also demonstrated the weaving of ceremonial silk belts, which requires a different technique from the historical traditions of Kars-Karin. 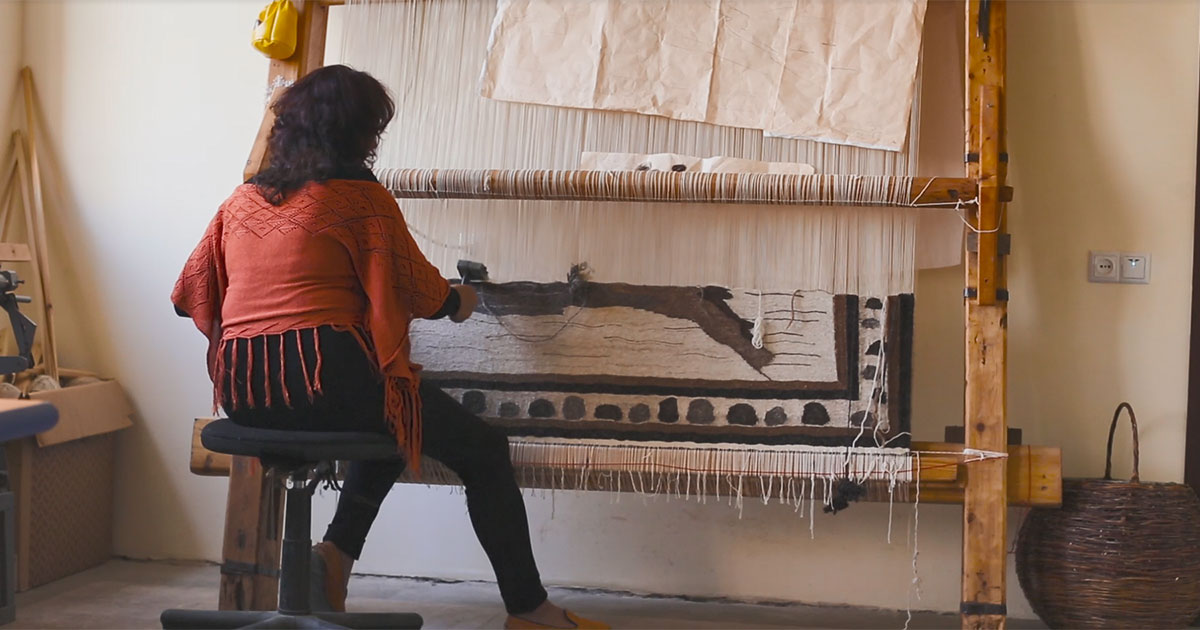 After three years of hand-weaving wool fabric into clothes, pillows, bags, and more at the Goris Women’s Development Resource Center, Tatev Hayrapetyan was delighted. “I could not even imagine how I lived without this work before, just staying at home and doing housework.”  The goal of the Center’s Wool-to-Carpet social entrepreneurship project is to create income opportunities for local women, and to revive and develop local crafts that had declined since Soviet times because of large-scale industrial development. The Center worked closely with an organization of experts in the Netherlands, who contributed new spinning wheels and hand-weaving machines that were adapted to local skills and materials. The pioneers who learned weaving techniques from visiting experts later passed these skills to students, including Tatev.

At the Center, the women wash and dry local wool, spin it, and weave carpets, fabrics, socks, and more—all inspired by specific local ornaments and Armenian patterns.