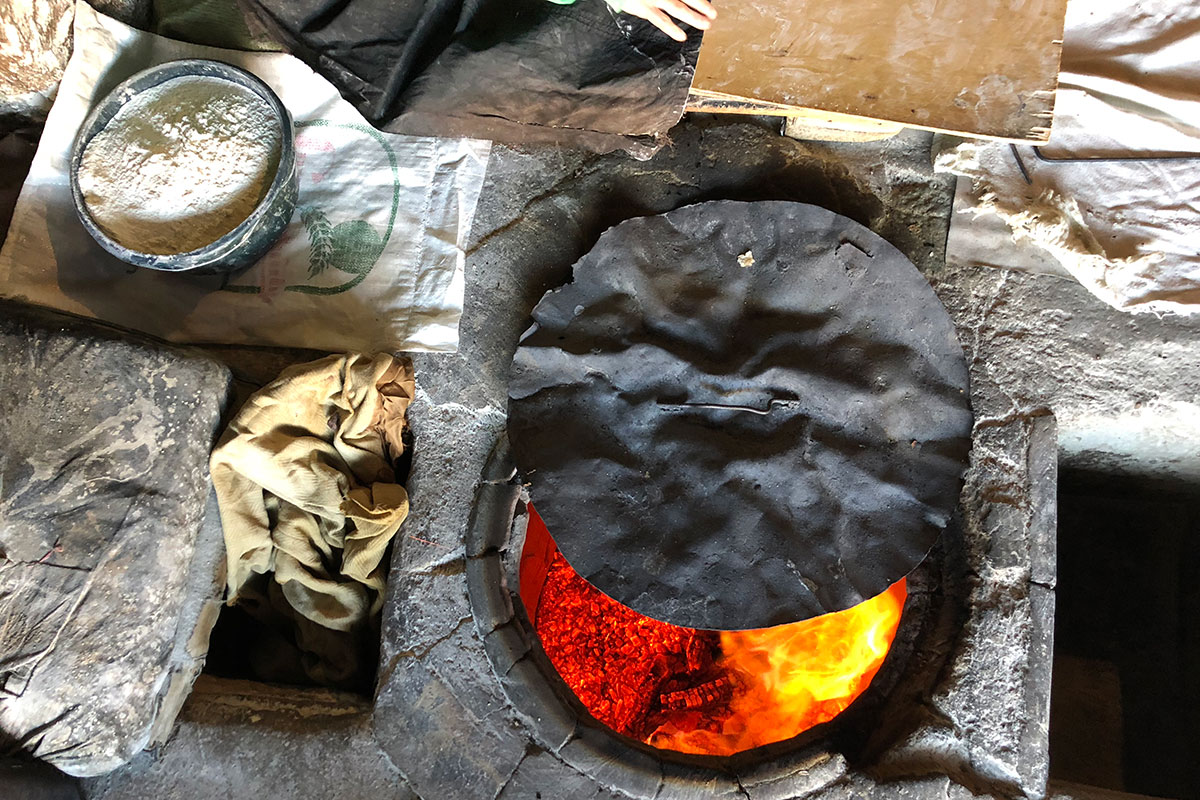 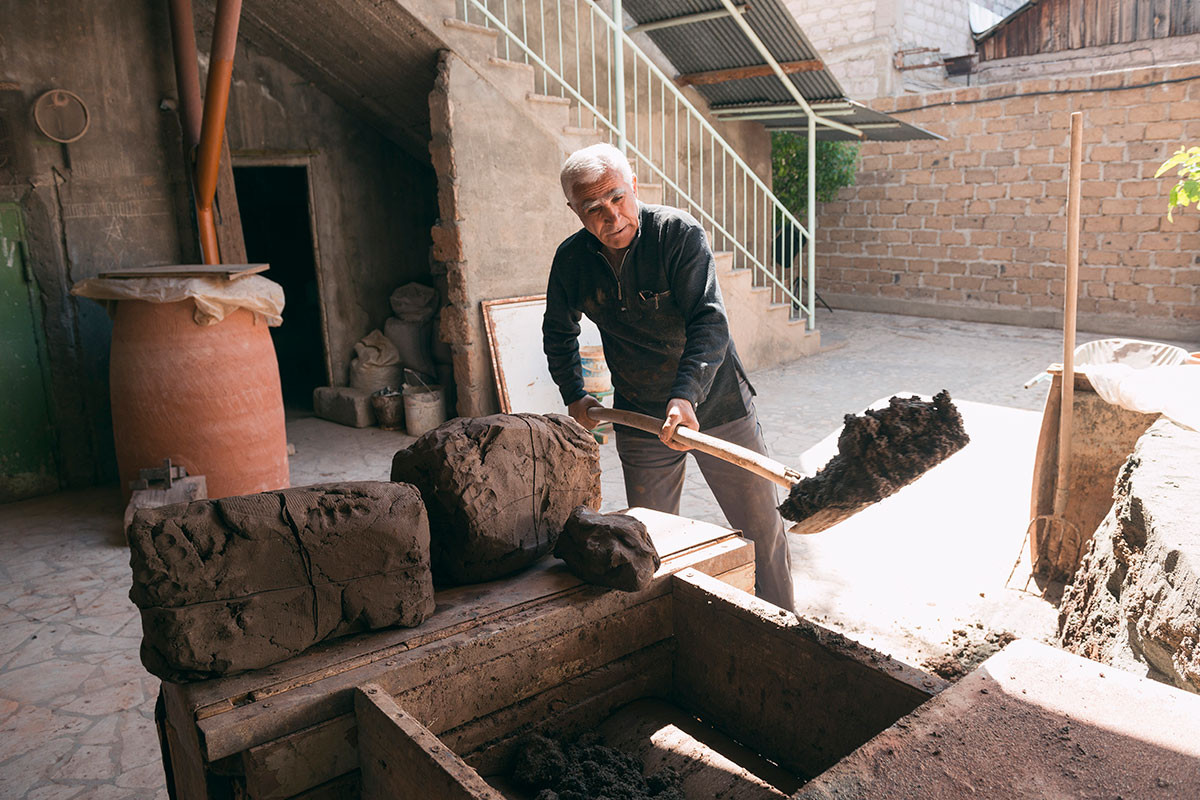 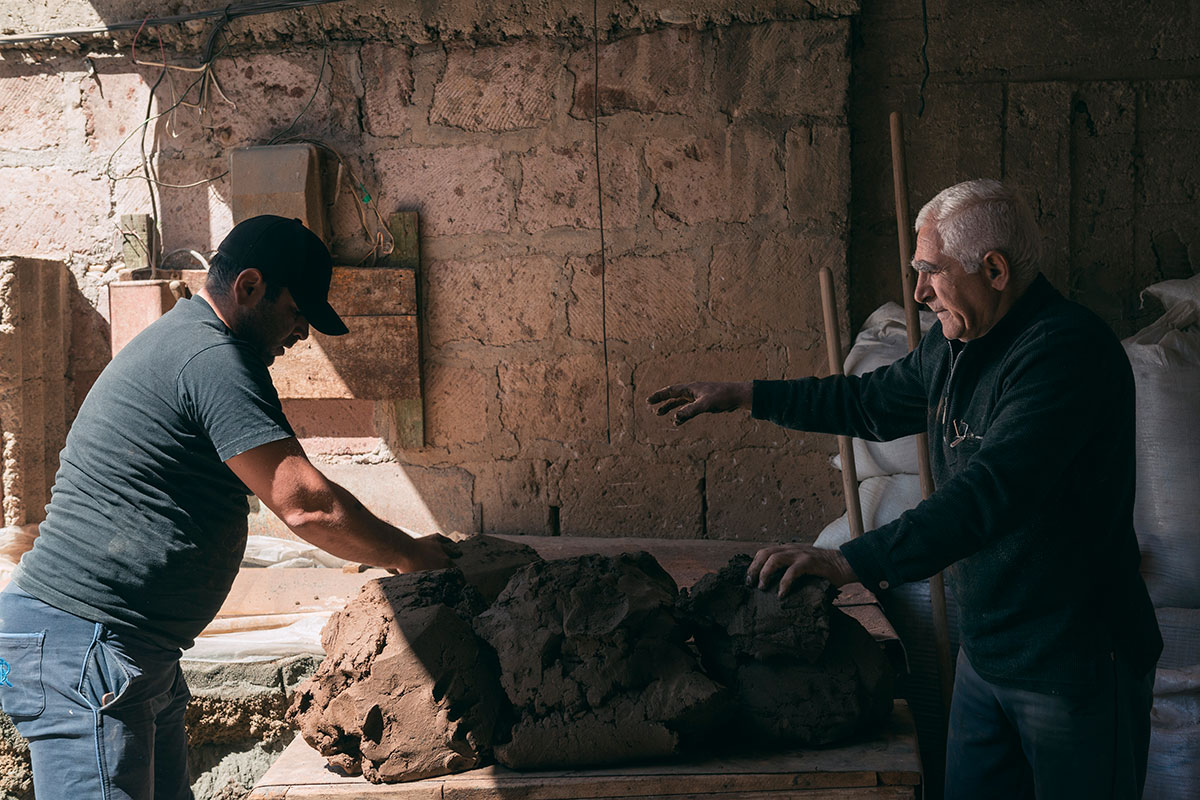 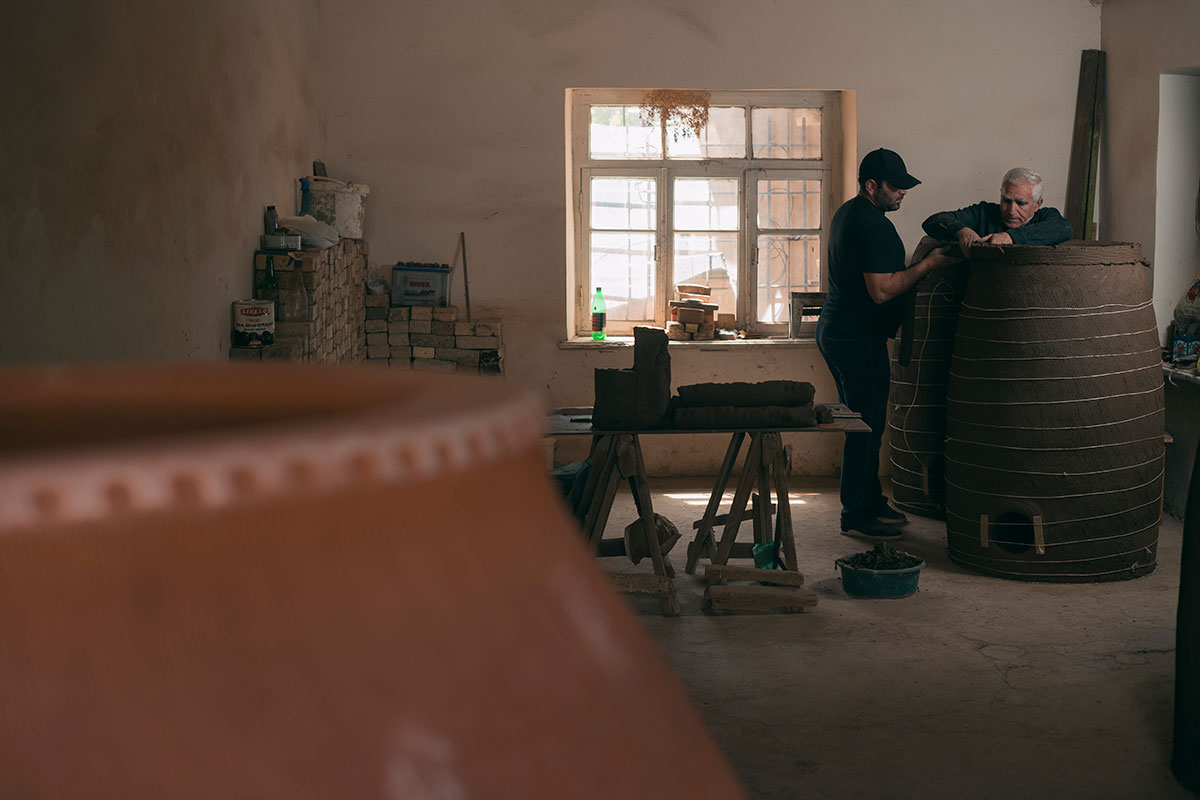 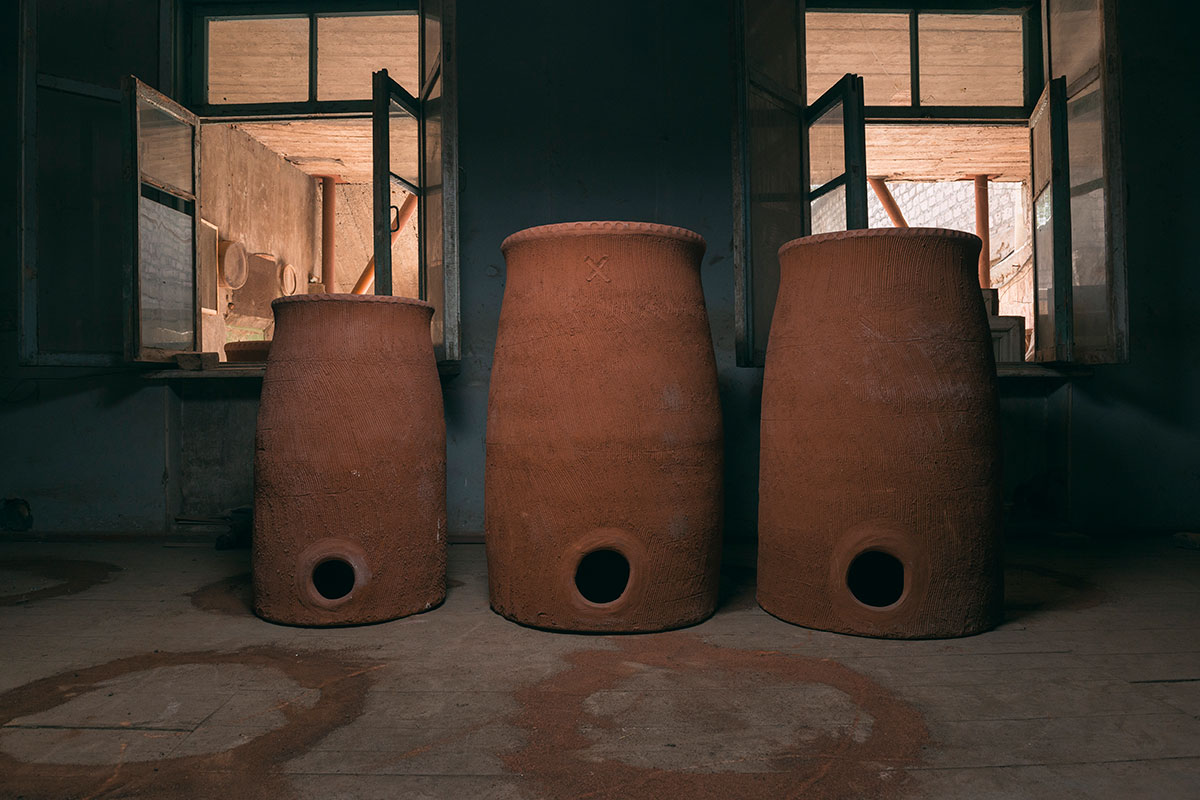 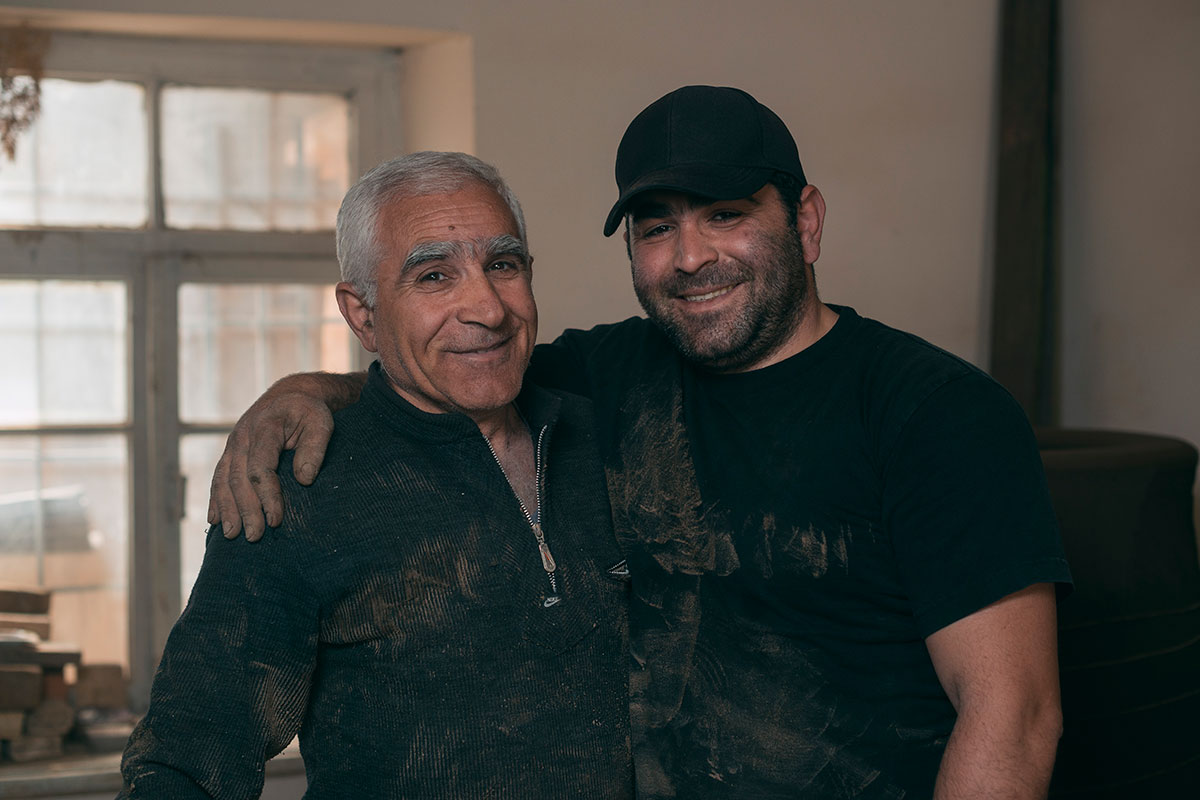 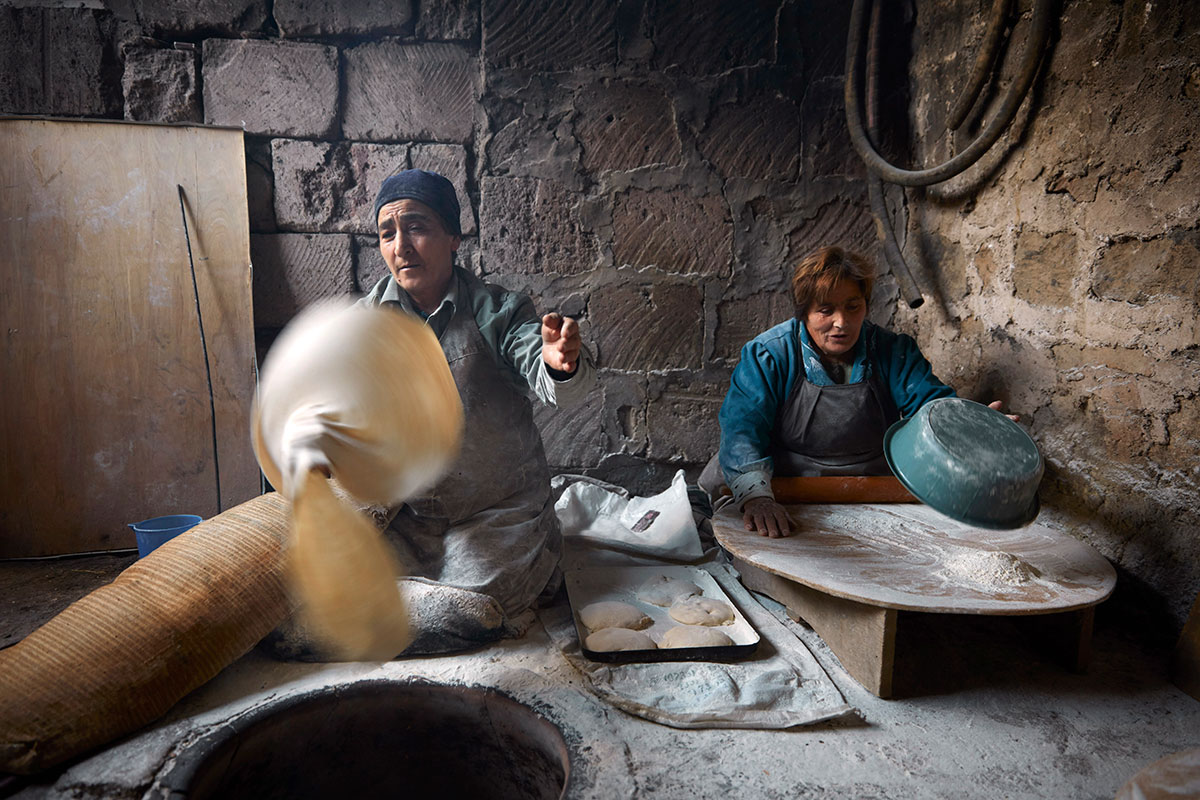 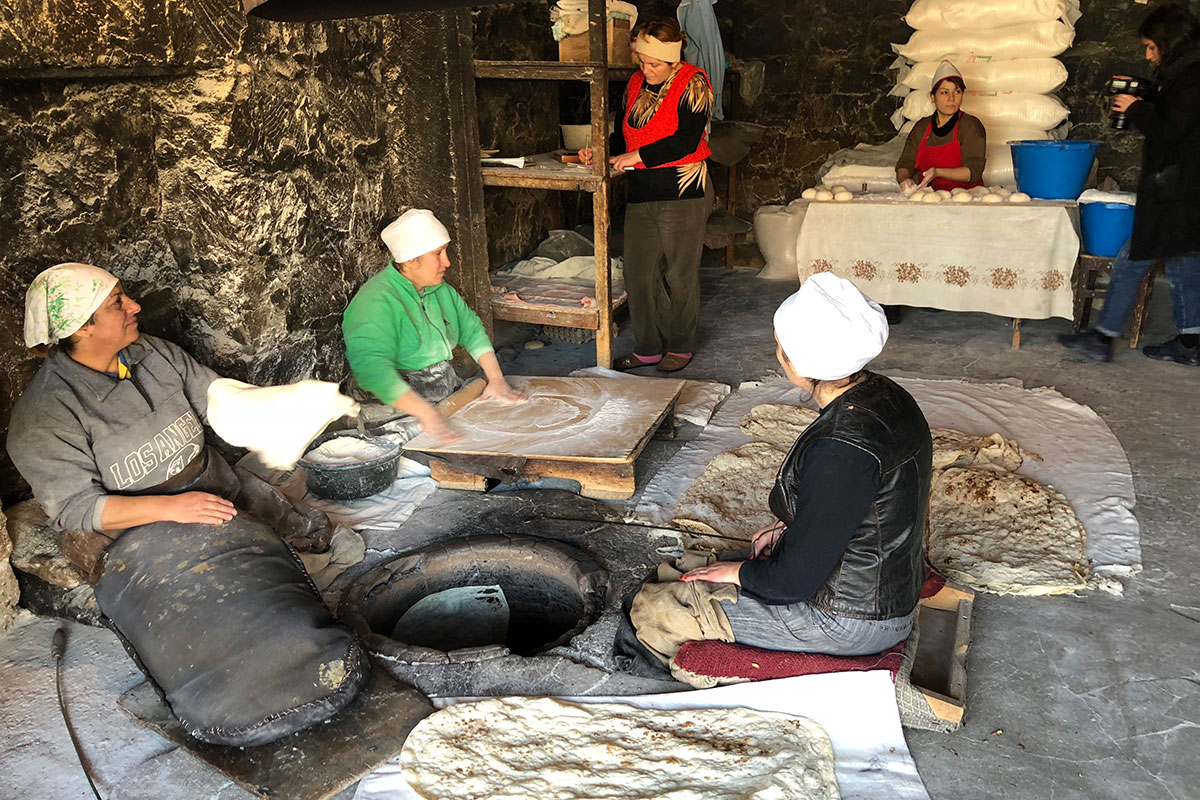 One of the most important toasts in the Armenian tradition is to ojakh, the hearth. The tonir is a sunken hearth that marks the center of a traditional home, both in topography and family life. It is a source for both heat and cooking, particularly for women to bake lavash bread.

Like a womb that gives birth to food and that helps to sustain life, the tonir is one of the home’s most sacred places. In some villages lacking churches, it may even take their role in sanctifying marriages. Moreover, as a source of underground fire, it served as a mystical passage to the lower world, which may explain why the active volcano south of Mount Ararat is called Tondrak in Armenian. Similarly, Armenians share a mythological story about a despairing young woman who jumped into a fiery tonir, only to be transformed into a fish—with water replacing the fire.

Tonirs are typically five feet high and two to three feet in diameter at the rim. Its lightly truncated cone is made of thick coils of clay. As food production—including lavash baking—became more industrialized in Armenia in the twentieth century, the demand decreased for tonirs. However, during the energy shortages of the early 1990s, tonirs were once more in demand. In both villages and cities, traditional tonirs are becoming increasingly popular, used not only for baking lavash, but also serving as fashionable new places in restaurants and stores. 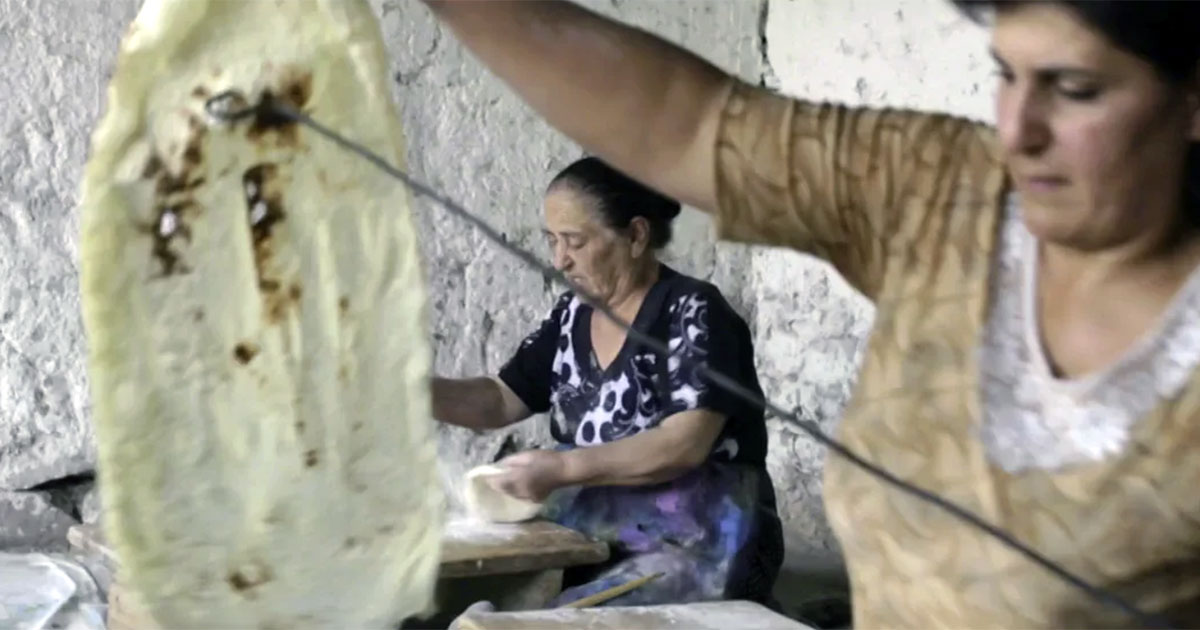 Lavash is the most cherished traditional thin bread in Armenia. Typically oblong, one-eighth of an inch thick, and weighing only seven to nine ounces, lavash is baked in the tonir. The process of baking lavash is itself a cultural and social ritual. It is a means of strengthening family, community, and social ties through group work. The process of baking lavash also promotes intergenerational relationships among women and young girls through the sharing and transfer of experience and knowledge. Lavash baking looks like a seated dance scene with each participant moving according to her precise role.

Lavash can be preserved in dry conditions for up to six months without spoiling. To save fuel and time, many families bake large quantities at one time. Dry lavash can be restored to its original freshness if sprinkled with water or wrapped in a clean, damp cloth shortly before use.

The most common way to eat lavash is to roll it around local cheeses, greens, or meats (including barbeque), thus creating an Armenian version of fast food. At weddings, the ritual placement of lavash on the shoulders of the newlyweds at the entrance to their house symbolizes the entry of a new bride into her husband’s household. The traditional meaning of this act is to wish the new family fertility and prosperity. In folk belief, lavash has the power to destroy evil and bring abundance and purification to the home. 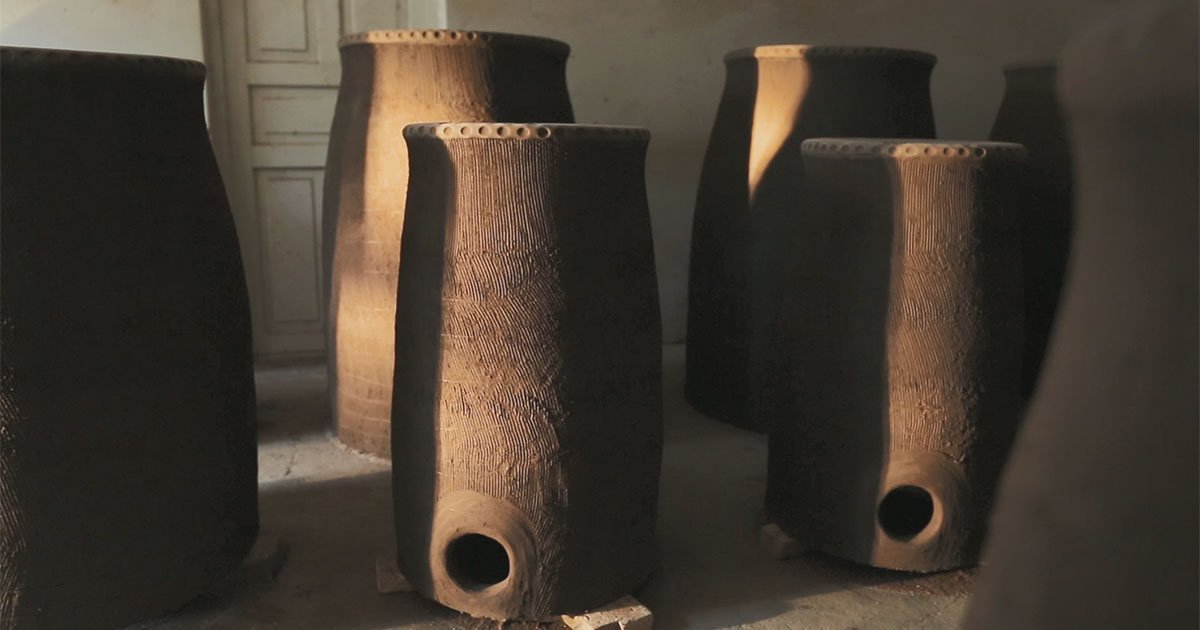 “I am talking with clay, with tonir, and putting my soul in it. It is not easy work. We have to cherish the tonir while working.”

Gegham Gharibyan is a well-known tonir maker who proudly maintains his family’s craft traditions. His grandfather made pottery, karases (winemaking vessels), and tonirs, even after his forced displacement from Bitlis (present-day Turkey) to Armenia in 1915. Gharibyan’s father continued those same craft skills. As a child, Gharibyan participated in all these clay “games” with his father.

Hundreds of Gharibyan’s tonirs are in different locations inside and outside Armenia. He greatly values the traditional craft and its intergenerational transmission. Gharibyan explains, “After my army service I joined my father, even knowing that it’s very hard work. My father convinced me to learn the craft—arguing that it would be useful at some point of my life. He was right. Since 1976 I have been making tonirs. Now my son is taking his turn. He is also a good tonir master. Even among thousands of tonirs I can identify the ones that I and my son have prepared.”

“Armenians will always find a way to bake lavash.”

Varduhi Poghosyan, a skilled lavash baker from the Armavir region, has been baking lavash for her family for almost thirty years, since she was nineteen. She recalled a memory from childhood: “I remember I used to cover the sunflower head with a piece of cloth, pretend that it is a pillow for lavash baking, put a piece of round dough on it, and try to learn lavash baking by myself.” Later in her life, due to the harsh economic conditions of post-Soviet times in the 1990s, Poghosyan baked lavash in many bakeries in Yerevan and beyond—Moscow, Krasnodar, and other places in Russia where many Armenians have emigrated.

Anna Tepanosyan is from Lusakert, a village known —thanks to its proximity to the highway—for its community-based food enterprises. Lavash and arishta, a type of handmade pasta, are among the favorite items purchased by those passing through. Lavash baking skills, a part of Tepanosyan’s inherited cultural heritage, now enhance her family’s economic sustainability. During the 1990s, she moved from Yerevan to her current village, where she started her home-based business. For the last fifteen years, she has cooked lavash and gata (cake) in a clay tonir.