The 2017 Folklife Festival will provide many opportunities for experiential exploration of the life and work of circus people all around the world today. The program focuses on five main disciplines of circus arts: acrobatics, aerials, clowning, equilibristics, and object manipulation. Visitors can go behind the scenes to learn from generations of circus families and contemporary visionaries who are keeping the circus arts alive and engaging. 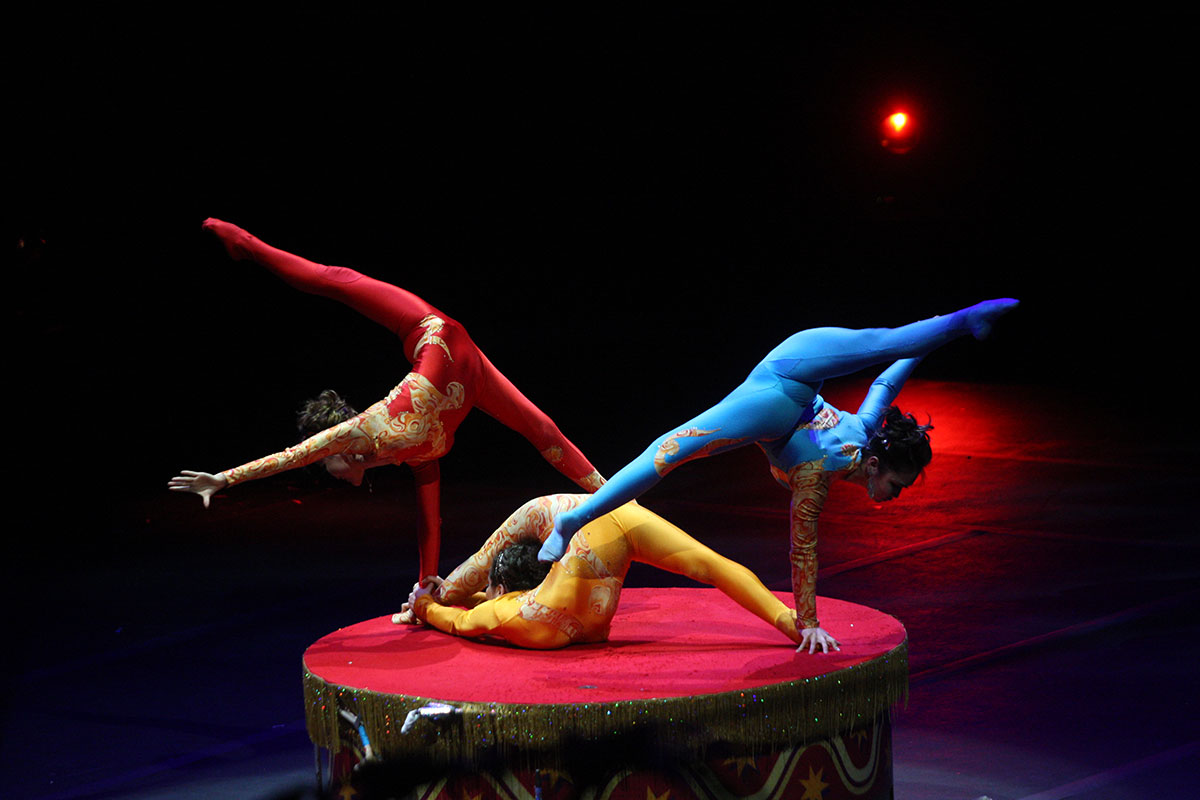 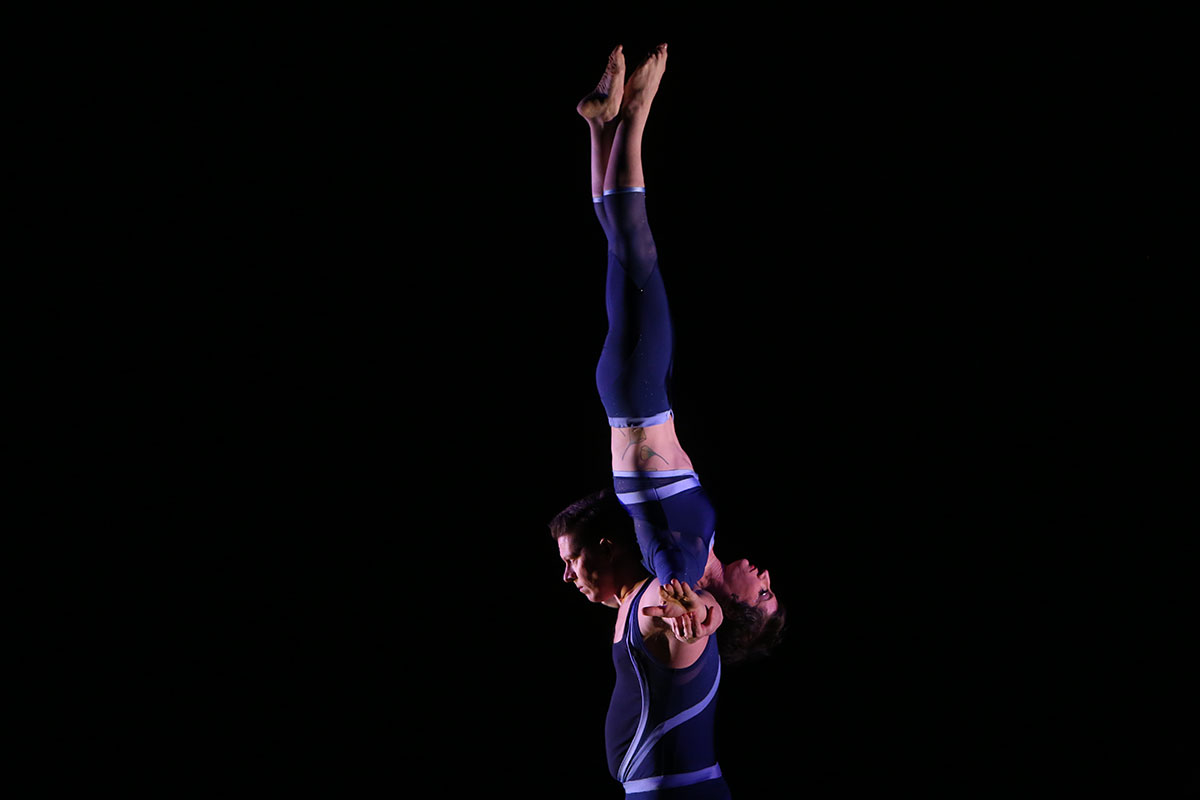 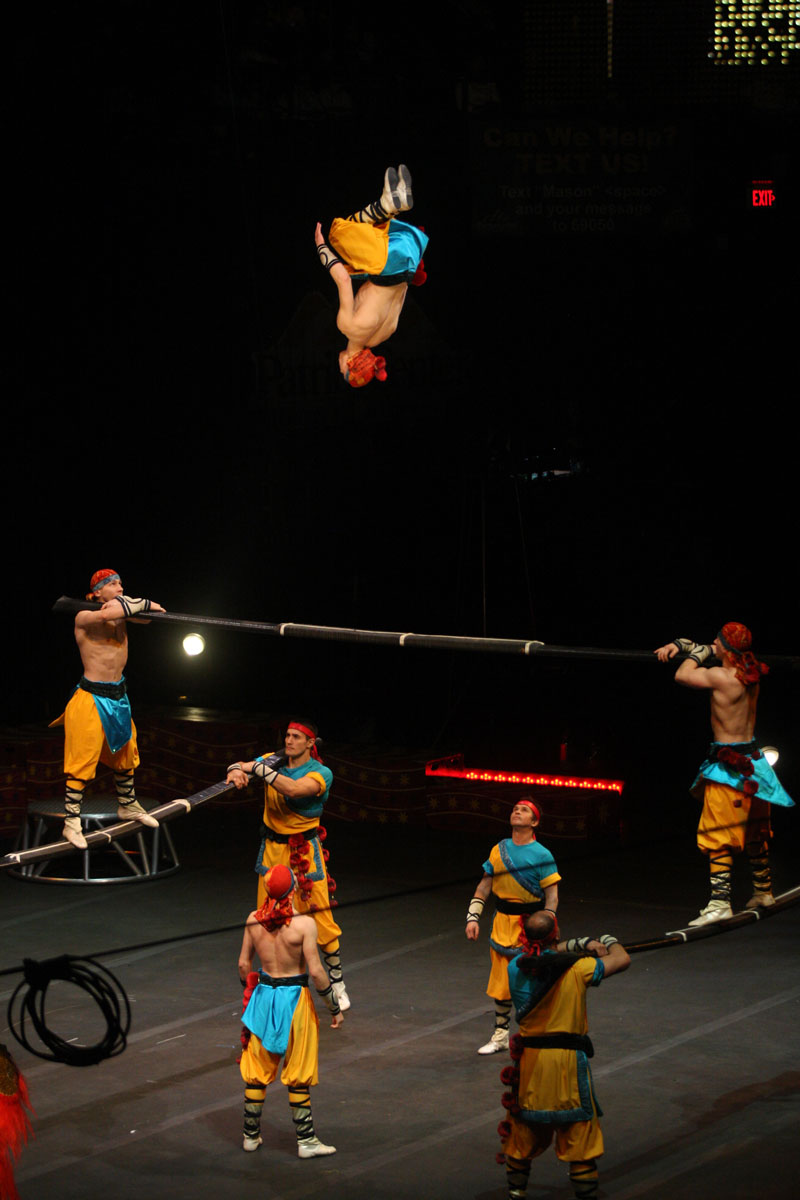 The term acrobatics describes a combination of physical performance arts that involve strength, agility, coordination, and balance. These skills date to ancient times in many cultures around the world. Frescoes and rare figurines from Minoan culture (c. 2,000 BCE) on the Mediterranean island of Crete depict acrobats somersaulting over bulls. Acrobatic contortions evolved and spread throughout ancient Greek and Roman culture, often as part of popular festival events. The Chinese have practiced acrobatics for more than 2,000 years.

Acrobatics were part of medieval village and court festivals and events, then incorporated into circuses starting in the nineteenth century. The advent of improved technological props have advanced the performance to new levels not possible in the past. They are also now part of the Olympic Games and other international competitions.

Some acrobatic demonstrations require special props, such as teeterboards, trampolines, and other specialized apparatus. Others require nothing more than a steady surface and strong and agile bodies, like hand balancing, contortion, risley (supporting and tossing partners with hands and/or feet while lying on one’s back), tumbling, and human pyramids. 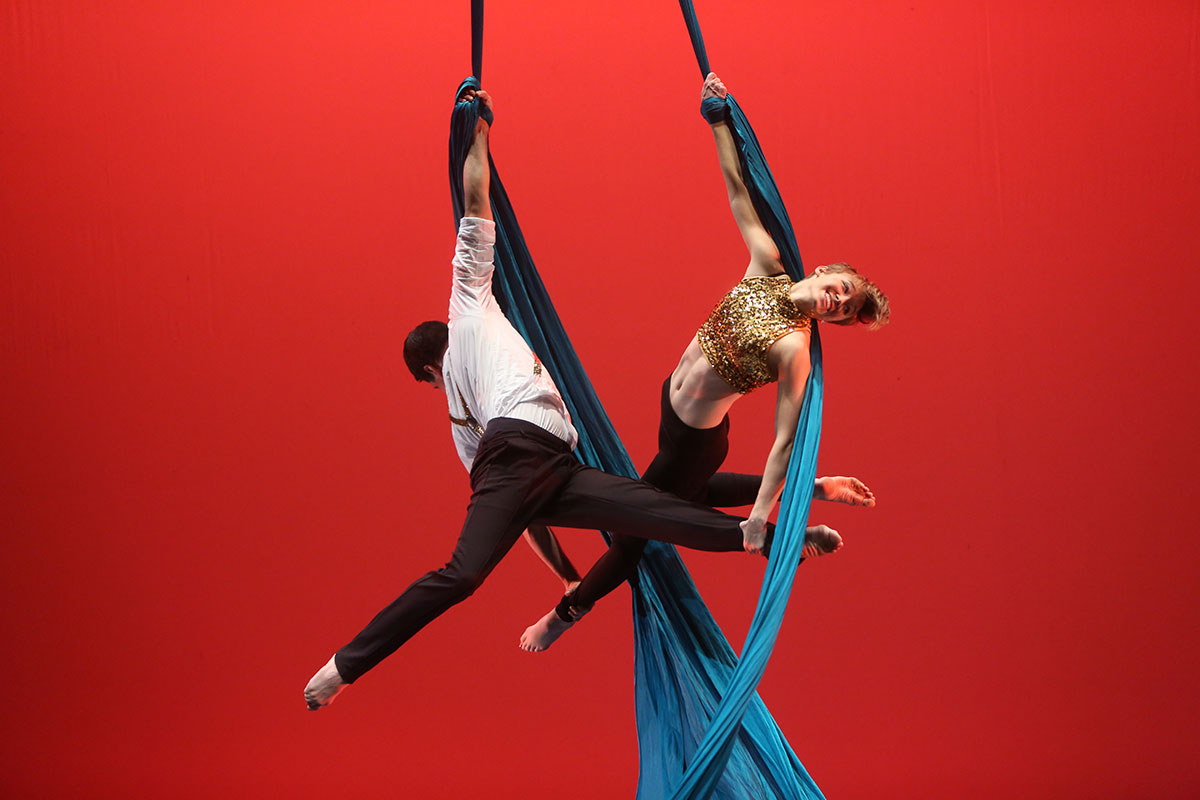 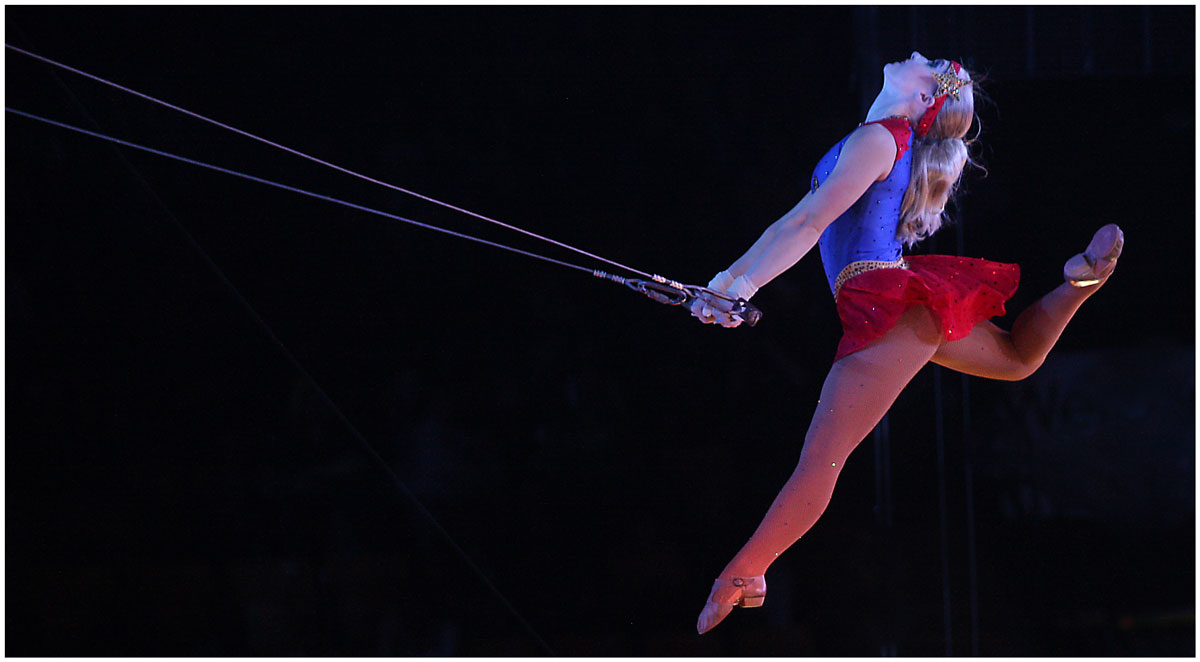 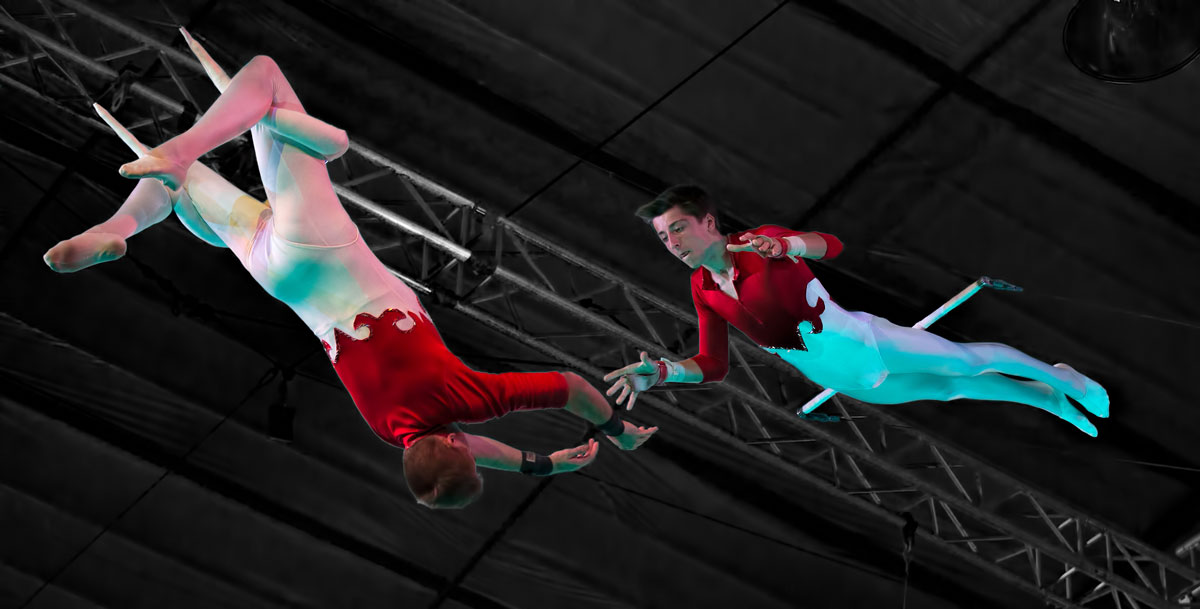 Aerial arts comprise a variety of airborne acts using specially rigged equipment, such as silks, straps, lyra, hammocks, and webs. Another popular form is the trapeze. In its most basic form, a trapeze consists of a relatively short horizontal bar attached to the ends of two suspended cables hung from a higher base of aerial support. It can be used in different ways, frequently described as either static or flying. Acts may be performed solo, double, triple, or as a combined group, depending on rigging design.

The flying trapeze was invented in France in the mid-1850s by Jules Léotard, a young gymnast from Toulouse. Using ropes hanging over his father’s swimming pool, Léotard rigged two trapezes and took a swing from one to the other over the water. He later replaced the swimming pool with bales of hay. On November 12, 1859, Léotard performed his flying trapeze act at the Cirque Napoleon in Paris, accompanied by the music of a simple waltz—thereby changing the look and experience of circus arts forever. Léotard performed the act in a one-piece, skintight suit, which now bears his name and is especially favored by dancers and gymnasts.

The question “What is a clown?” evokes many reactions, associations, stereotypes, and clichés. For some, there are recollections of encounters with clever and insightful individuals, who through physical comedy shed new perspectives on aspects of life both everyday and universal. For others, there are memorable images from literature and painting that reflect changing times, both in and out of circus contexts. And for others, there are associations with colorful and eccentric costumes, exaggerated makeup, peculiar antics, and other behavior that may be comic or (for some) even scary.

As with many of the circus arts, physical comedy and the need to laugh have deep roots. Expressions of physical comedy appear in cultures and societies globally, suggesting that the craft is a shared part of human experience whether or not associated with circus.

The circuses of Philip Astley in London (1768) and John Bill Ricketts in Philadelphia (1793), which are popularly understood to be the first “modern” circus and first American circus respectively, both included comedic elements. The presence of clowning in circus has continued to evolve with changing tastes and social mores until the present day. 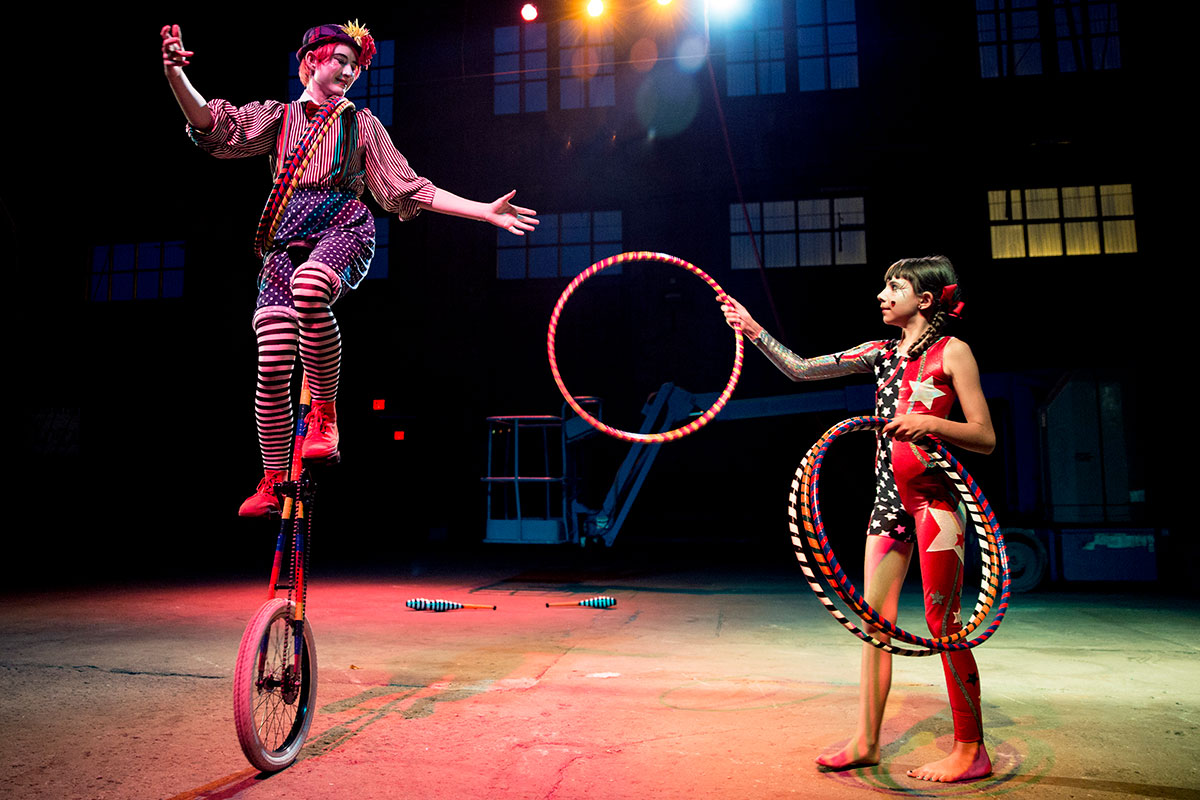 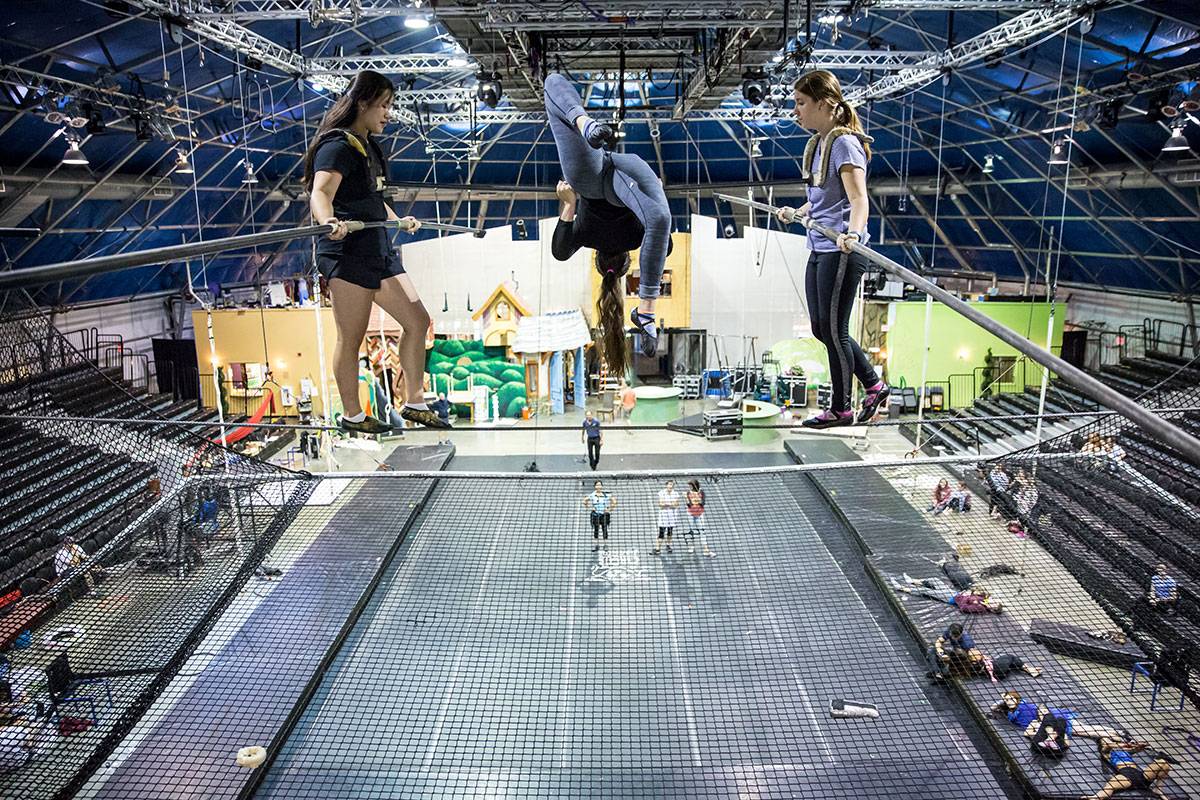 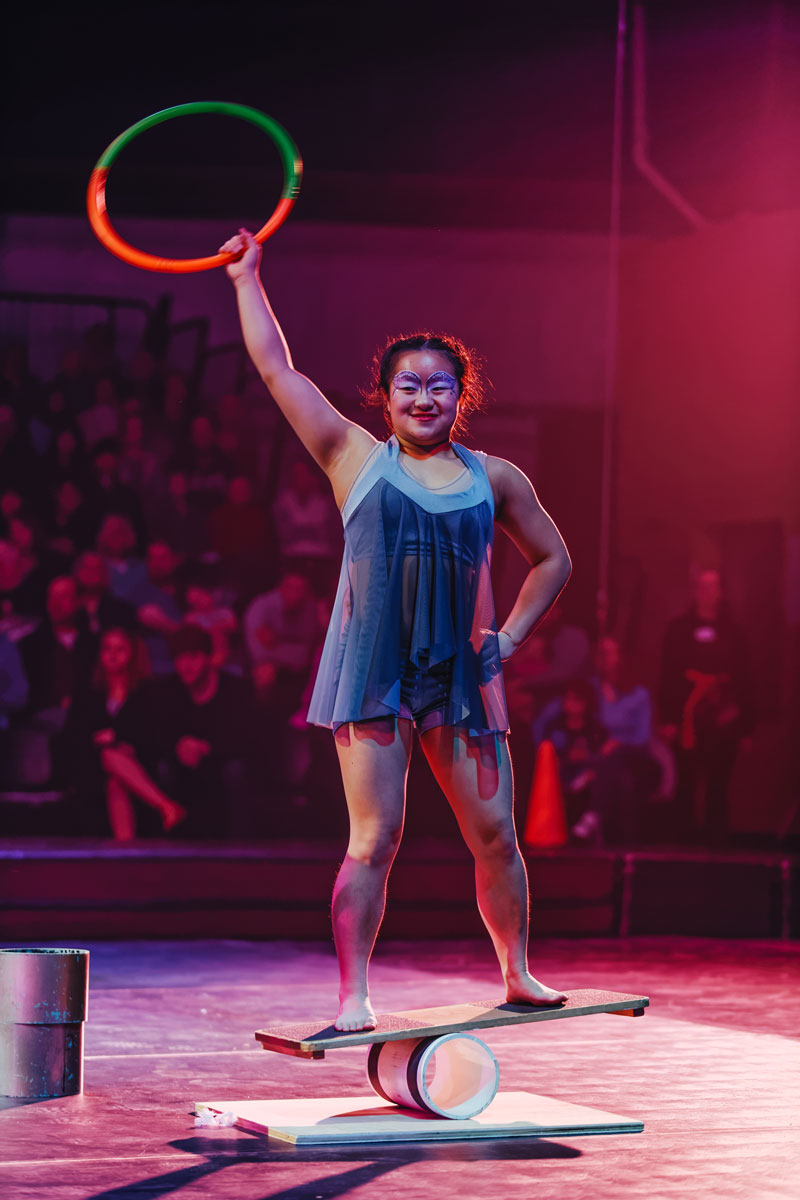 Balancing on a unicycle is trickier while also hula-hopping.
Photo by Jenna Lowery
Students at Circus Juventas rehearse high above the gym floor.
Photo by Dan Norman
A Circus Juventas performer demonstrates the roller board.
Photo by Bill Raab

Mastery of balance or equilibristics is one of the most respected circus arts of all time. We are fascinated by those who can skillfully walk or prance on globes, ropes, and wires or cables. There are images of ancient Greeks and Romans balancing on ropes, as well as rope-walkers in medieval Europe, particularly at festive public environments that predate the modern circus.

As with most circus arts, balance skills have adapted and changed many times, reflecting new possibilities with changing technologies and accompanied by new challenges. Wire-related rigs range between high and low (whether inches off the ground or many feet above) and slack and tight (depending on the amount of tension). All reflect state-of-the-art engineering in response to professional needs.

With a wire or rope under their feet, circus artists can muster the focus and discipline required to walk over magnificent waterfalls and between skyscrapers. Other examples of equilibristics include roller boards, globes, stilts, and cycles. 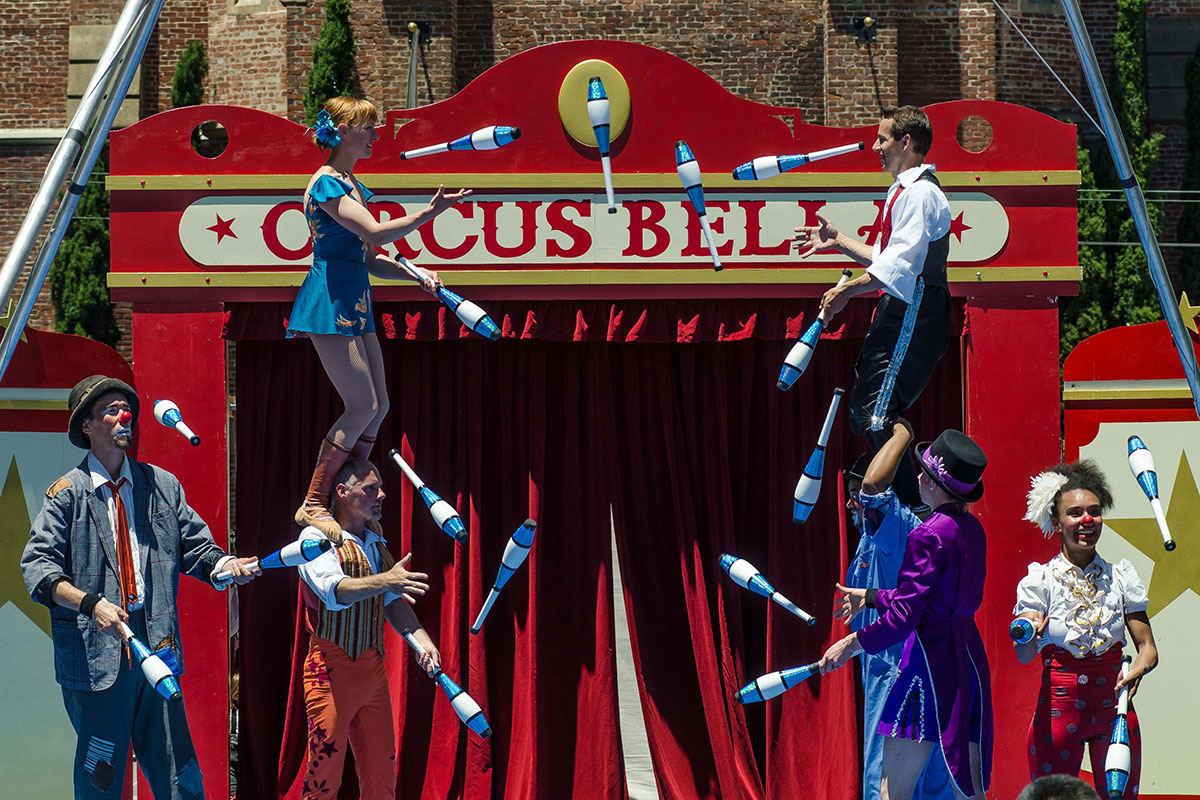 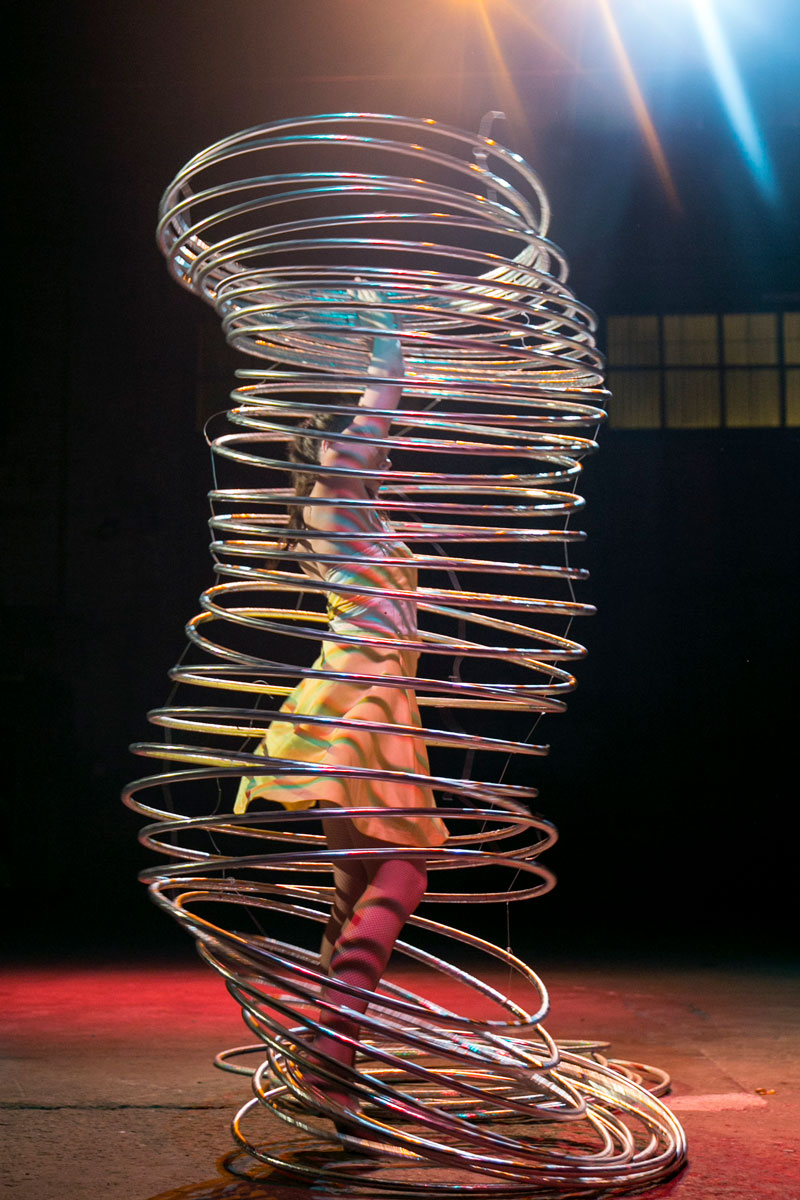 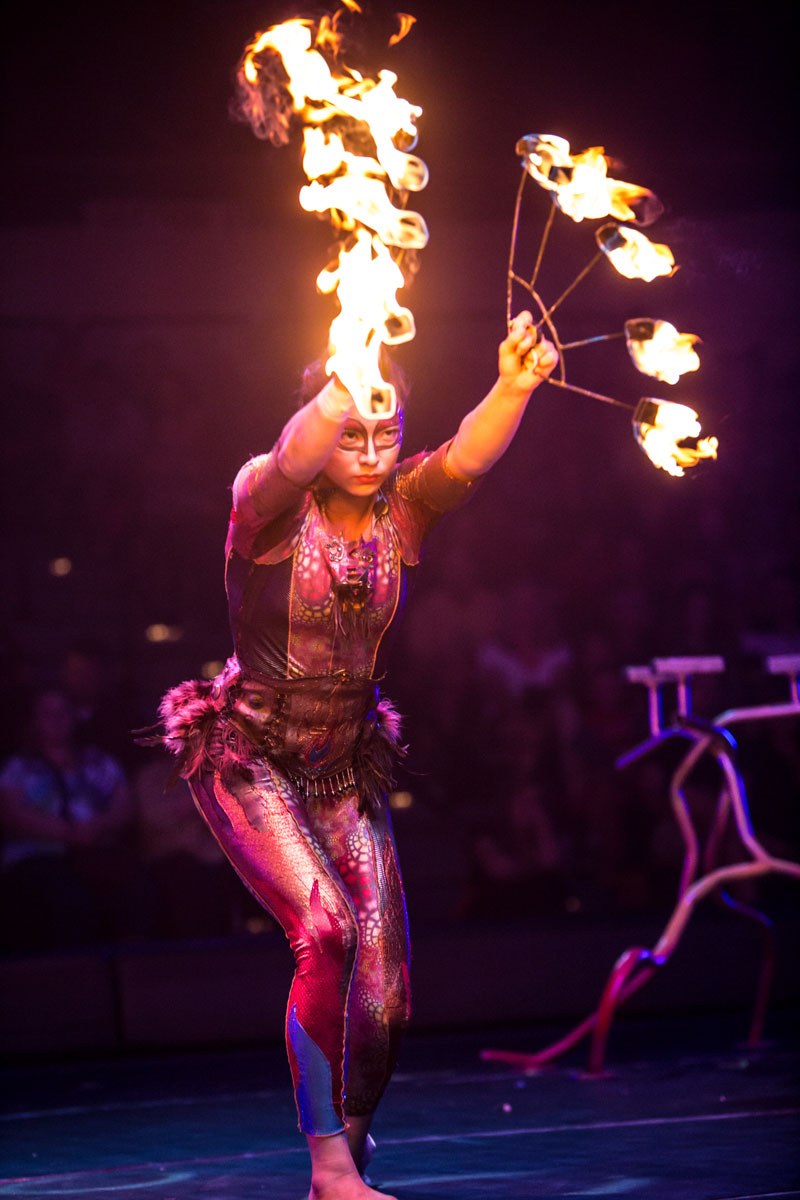 Juggling is part of one of the most recognizable groups of circus arts known as object manipulation—many with origins far more modern than juggling. Other types of object manipulation include hooping, plate-spinning, fire staff, and diabolo (juggling a spinning spool on a string attached to two hand sticks). All involve combined skills of tossing, twirling, and physical dexterity.

Like many of the most popular circus arts, juggling has ancient roots. For instance, images of jugglers appear on the interior walls of an Egyptian tomb that dates back approximately 4,000 years.

There are many styles of juggling that involve different types of props and skills. Some can be performed by only one juggler, while others require two or more people. Popular toss juggling usually involves the use of balls, clubs, rings, or a combination thereof, which requires more skill. Some extreme jugglers have tossed many other things—including chainsaws.

Innovations in technology, materials, and design have also led to new approaches and techniques in juggling. Some of these innovations have been designed specifically to extend the activity to people with physical and other challenges that made traditional juggling impossible.