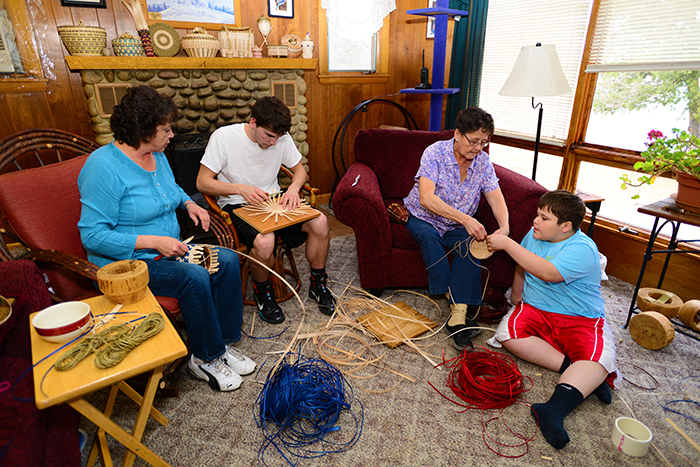 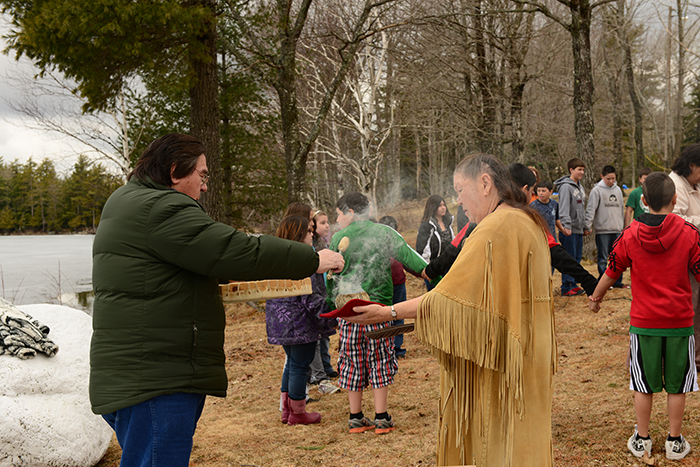 Molly Neptune Parker (right), a master Passamaquoddy basket maker, and her daughter Janet, teach young family members how to make baskets in their home in Princeton, Maine. A native Passamaquoddy speaker, Molly Neptune Parker uses basket making lessons as an opportunity to pass on her language to the younger generations.
Photo by Tom Pich
Passamaquoddy elder, culture expert, and language educator Wayne Newell and spiritual elder Joan Dana participate in a traditional Ice Out ceremony on the Passamaquoddy Reservation in Indian Township, Maine. Wayne Newell is a native Passamaquoddy speaker who has worked tirelessly to preserve and pass on the language and cultural traditions of his tribe for future generations.
Photo by Tom Pich
Language is the roadmap to culture.
— Wayne Newell, Passamaquoddy elder and language educator, Maine

The Wabanaki Indians of northern Maine—the Maliseet, Micmac, Passamaquoddy, and Penobscot—have made great efforts to restore, sustain, and revitalize the cultural knowledge and traditions of their ancestors. Through basketry, music, song, and dance, maple sugaring, ice fishing activities, and language classes they are passing down their treasured ways of life to the next generation. The Passamaquoddy language, once vibrant, has only a few hundred fluent native speakers left, most over fifty years old. The tribe has taken action to keep the Passamaquoddy language alive, including publishing a massive Passamaquoddy-Maliseet Dictionary and conducting innovative language and cultural programs that reach out to tribal youth in the schools and community. “It takes a commitment by the community,” says Passamaquoddy elder and language educator Wayne Newell. “We’re trying to bring up a whole new generation of speakers.”

This presentation was made possible by the Smithsonian National Museum of the American Indian.