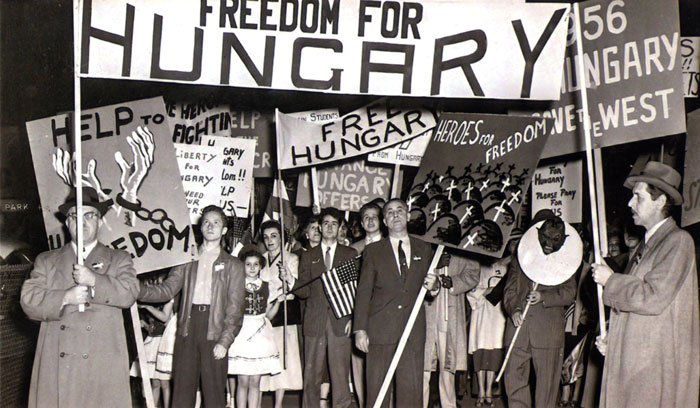 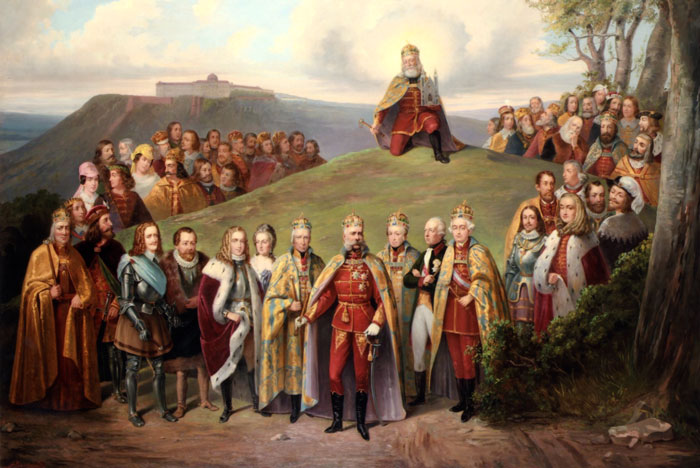 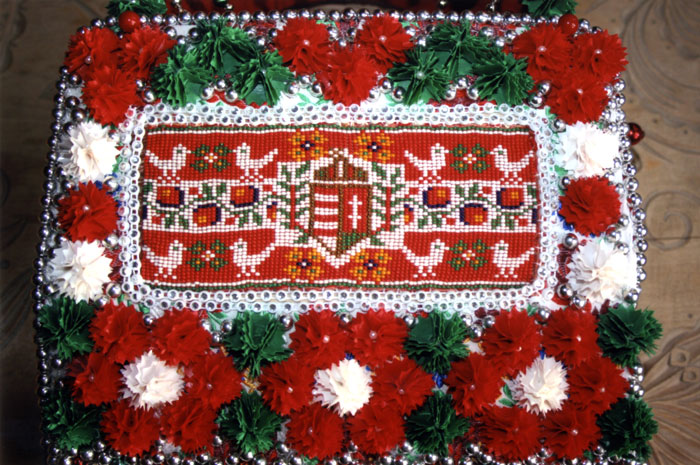 Hungarian Americans in Chicago demonstrate in solidarity with the suppressed revolution of 1956 taking place in Budapest. The 1956 revolution was the largest and most far-reaching armed uprising against the Soviet Union until the 1980s.
Photo courtesy of Balázs Balogh, Hungarian Academy of Sciences, Institute of Ethnology
In this late-nineteenth-century painting, Saint Stephen wears the Holy Crown of Hungary, encircled by all of Hungary’s kings. Courtesy of Hungarian National Museum
Made for the occasion of a young girl’s confirmation in 2011, this beaded headdress from the Kalotaszeg region of Transylvania (Romania) displays the Hungarian national coat of arms along with traditional folk motifs.
Photo courtesy of Tekla Tötszegi

Hungary is a small country in Central Europe, roughly the size of Indiana. Its population is approximately 10 million, but another 2.5 million Hungarians reside within the seven countries surrounding its borders (Austria, Slovakia, Ukraine, Romania, Serbia, Croatia, and Slovenia) and another 2 million Hungarians live in other parts of the world. These people speak Hungarian—known as Magyar (also the word that refers to a person of Hungarian ancestry). At the turn of the ninth and tenth centuries, the semi-nomadic Magyar people migrated from the Eurasian Steppe to Central Europe.

Hungary’s history began with the coronation of its first king, Saint Stephen, in 1000 CE. Drawing and absorbing new peoples and traditions, it quickly became a multiethnic country, due in part to the invasion of the Mongols in the thirteenth century, the invasion of the Ottoman Turks in the sixteenth century, and the Habsburg rulers who occupied the throne of the Kingdom of Hungary from the sixteenth century to 1918. Subsequent periods of foreign domination include those by Nazi Germany during World War II and the Soviet Union from 1945 until 1989.

Also contributing to the country’s cultural heritage have been Hungarian Jews—present since at least the tenth century—and various groups of Roma people (also known as Romanies or Gypsies), who began arriving in Hungary during the fifteenth century. The resulting culture expresses itself in a rich and diverse heritage of music, dance, costume, arts and crafts, gastronomy, and even the conventions of naming; Hungarians place the family name before the given name, as is the case with most peoples of eastern and southeastern Asia.

Regions at the Festival

The Roots to Revival program highlighted the heritage and traditions of four Hungarian communities existing both within and outside of Hungary’s contemporary borders. The Szék, Kalotaszeg, Sárköz, and Kalocsa regions all maintain distinctive folk arts, forms of dress, music and dance, speech, and religious practices. Despite modernization in the twentieth and twenty-first centuries, residents of these cultural regions have carefully preserved many of their local customs. Maintaining traditions is an important part of these communities’ identities. The residents are committed not only to preserving their folk arts, but also to ensuring that their heritage will be passed to younger generations. 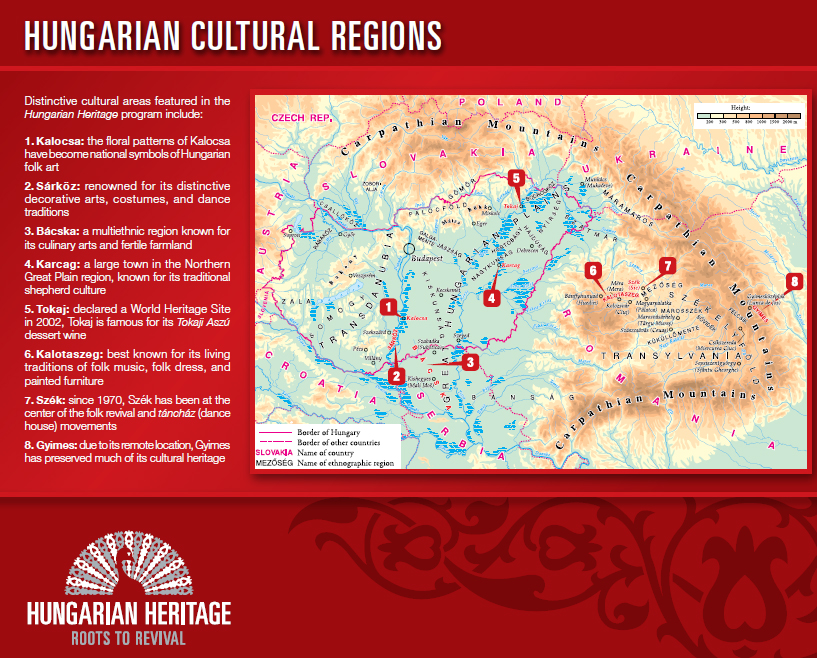 Click to enlarge and learn more about Hungarian cultural regions