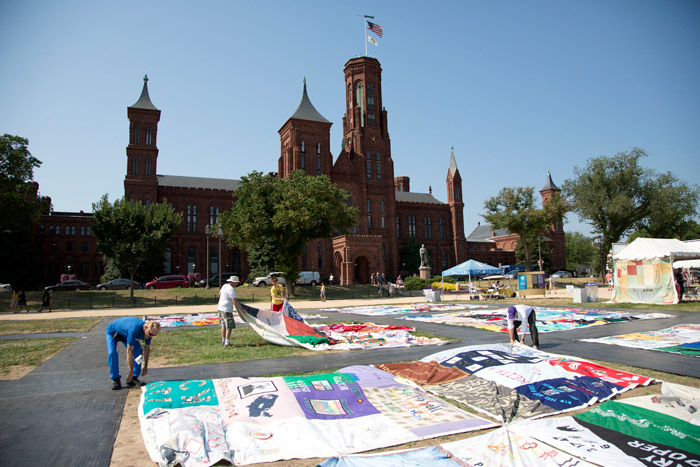 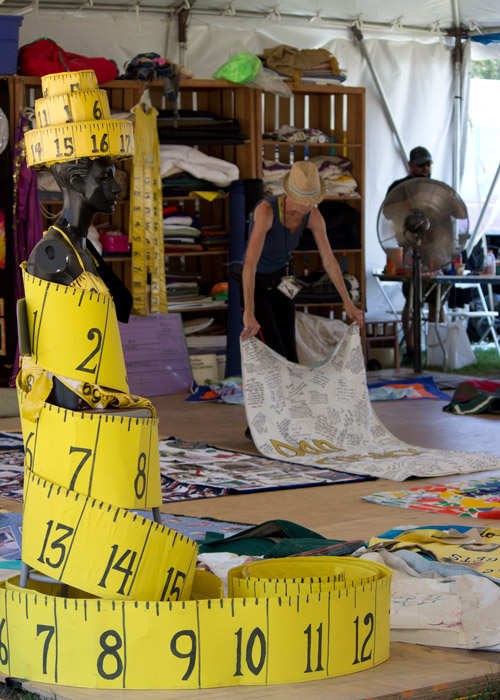 Since 1987, the AIDS Memorial Quilt has grown and transformed into an international conversation about advocacy, health reform, and social change. Yet the message of The Quilt remains the same: remember. At the 2012 Smithsonian Folklife Festival, both original founders and recent staff of The NAMES Project Foundation reflected on The Quilt’s evolution, from its initial conception to its current status as the world’s largest community art project.

“It’s important to remember,” said co-founder Mike Smith, “that the first quilt panels were not the pieces of art you see now. They were spray paint and bed sheets; it was a quilt as much as it was a protest banner. It was not a beautiful thing as you see now. It was a political message... it was about anger, frustration… not art.” In the early years of the HIV/AIDS epidemic, the public struggled to find a way to make sense of the growing number of dying neighbors, friends, and family. The Quilt not only memorialized individuals, but functioned as a tool to break the silence and stigma surrounding HIV/AIDS. While The Quilt has its roots in the gay community, its message resonated in many communities as the disease began to impact all demographics of the population. The Quilt quickly grew to include panels made by and in memory of people of all races, sexual orientations, religions, and nationalities. What were once hastily spray-painted names on bed sheets became panels of colorful textile with intricate stitching. The modern AIDS Memorial Quilt was born.

Although The Quilt was originally forged out of fear, desperation, and grief, today it represents a compassionate response to a deadly virus that, above all, celebrates the beauty and love of a life lost to HIV/AIDS. “That is one of the most beautiful things about The Quilt,” said Julie Rhoad, NAMES Project Foundation CEO and president “…it makes the public realize that those who died are not just statistics, but were real lives with stories that mattered.” Quilt panels facilitate dialogue and create a sense of community between individuals seeking comfort, strength, and hope from all around the world. The 2012 Smithsonian Folklife Festival highlighted the diversity of those affected by the disease and the value of relationships forged through a quarter-century of the fight against HIV/AIDS. Most importantly, this piece of folk art emphasizes people can overcome the devastation of the disease through the support of a community. “The Quilt was one of those very first expressions that told us that we're all connected, somehow, some way,” said Julie Rhoad, “it reminded us of our humanity.”

Katie Cardenas was an intern for the 2012 Smithsonian Folklife Festival on the Creativity and Crisis: Unfolding The AIDS Memorial Quilt program. She is a graduate of Vanderbilt University, where she studied Anthropology, Global Health, and Spanish.

Glenn Burke: Out On the Field
Keith Haring in The AIDS Memorial Quilt
Beneath the HIVe: Unifying at the Quilting Bee
Join our email list for the latest news from the Smithsonian Center for Folklife and Cultural Heritage
Support the Folklife Festival, Smithsonian Folkways Recordings, sustainability projects, educational outreach, and more.
Support Folklife. Donate Now.