When people donate panels for inclusion in The AIDS Memorial Quilt, they fill out “Purple Cards” with their name, contact information, and details or stories about the panels and the people being memorialized. Some panel makers include letters about the person their panel commemorates. At large displays, new panels are dedicated onsite by pinning them with other single panels and immediately adding them to the display. These panels are later sewn into blocks at The NAMES Project Foundation warehouse and officially become part of The Quilt.

For large Quilt displays, four blocks are joined together to create a “patch.” Each patch is folded in a “Lotus Fold,” inspired by the lotus flower. After the walkway is in place, these folded patches are placed on the grass in preparation for unfolding ceremonies. The ceremonial opening of the first block of Quilt involves eight people, who slowly undo the “Lotus Fold” so that The Quilt opens like a flower, revealing the panels inside. Once the patch is opened, all eight people lift it off the ground and rotate it clockwise until it is aligned correctly.

During the Quilt’s display, the names commemorated on each of its panels are read aloud. Many cultures believe that an individual remains a part of the community even after death as long as he/she is remembered. The public reading of the names of those who have died from AIDS is a way to keep their memory alive and to ensure that individuals are remembered by name, rather than as statistics in the AIDS death count.

Displays of the AIDS Memorial Quilt serve an important consoling function. Through its broad and poignant expanses and through the many rituals developed around it, The Quilt creates a sacred space—an oasis where people can grieve, meditate, and listen to what is in their hearts. 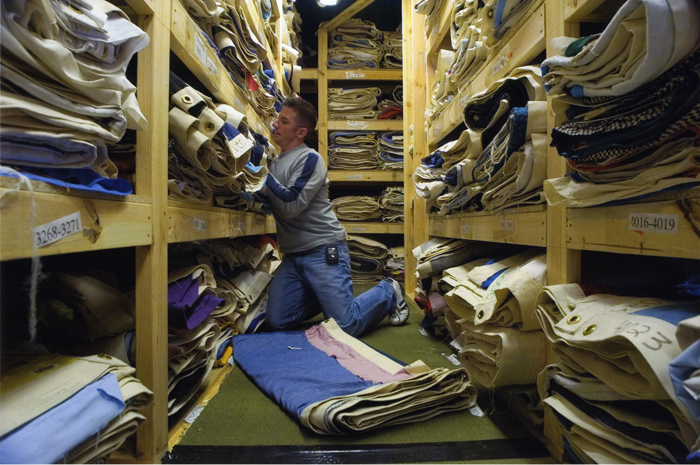 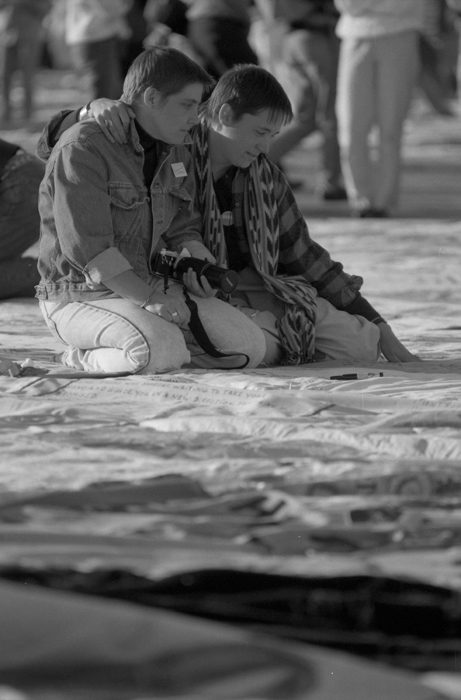 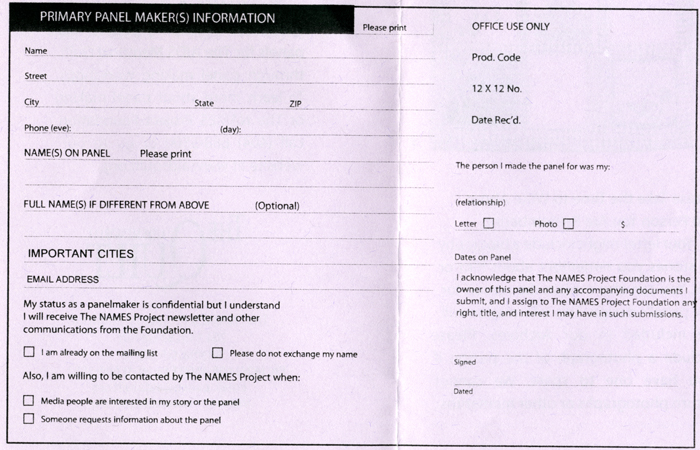 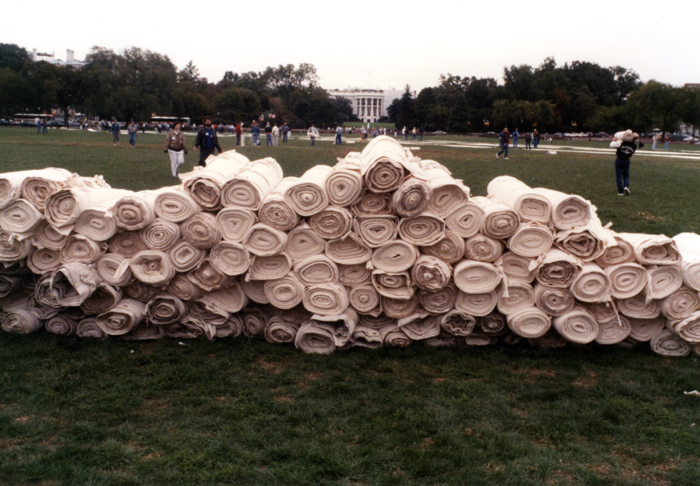 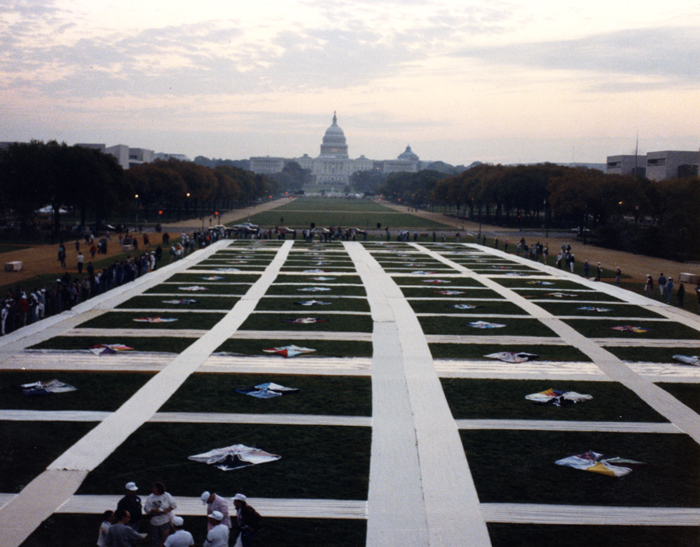 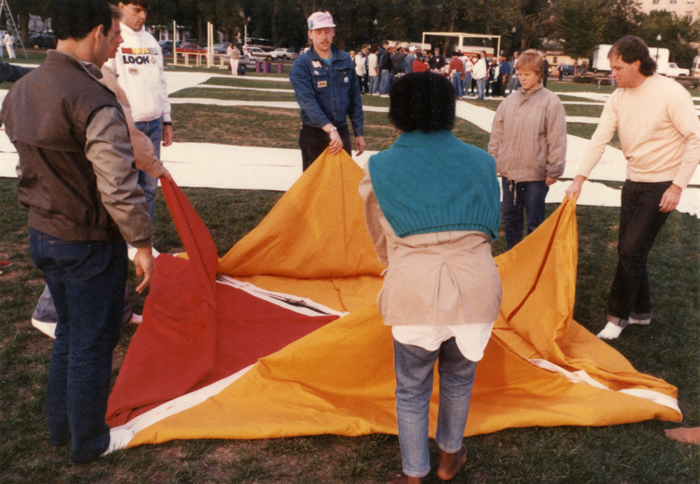 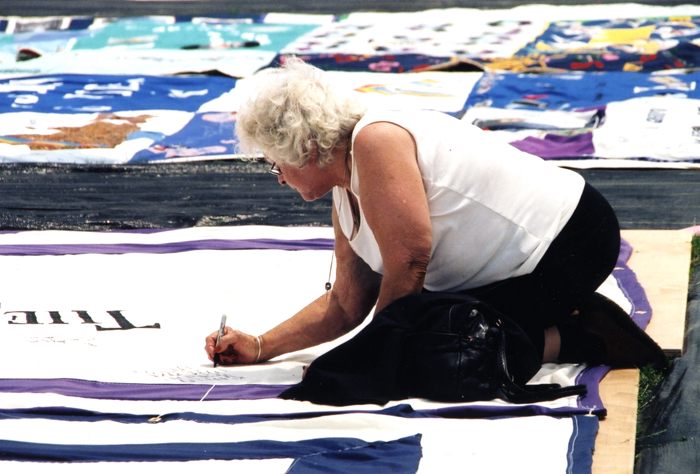 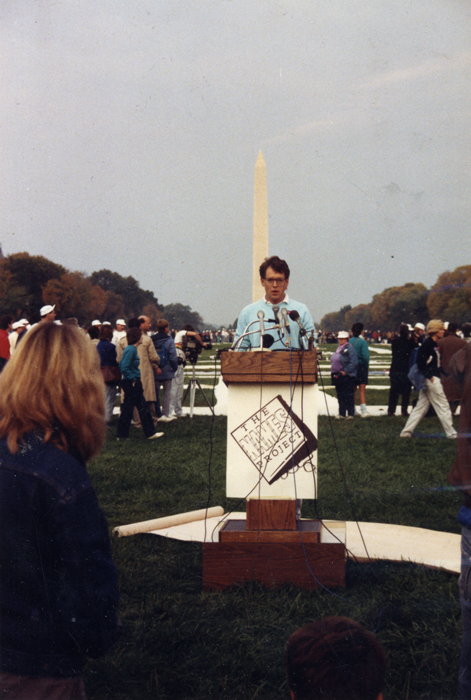 “Patrick Haag and I were in love as much as any two people could be. We were soul mates; made for each other; a pair of socks. We were very happy together.

In 1988, Patrick was diagnosed as HIV-positive and shortly thereafter, I tested positive also. At first we were in total denial. Then a section of The Quilt came to St. Louis and the reality of seeing the panels jolted us. Viewing The Quilt that day was the biggest step we made in the acceptance of our diagnosis.

One of the first things we did was design our Quilt panels. We wanted them to look like quilts and samplers, and designed so that anybody who saw one would know it went with the other one. These panels were made to be together.

Patrick made me promise that he wouldn’t be on The Quilt without me. So I have kept his panel so that both panels could be submitted at the same time. I’m happy that we will be together on this memorial that was so vital to our own acceptance of our AIDS diagnosis.”