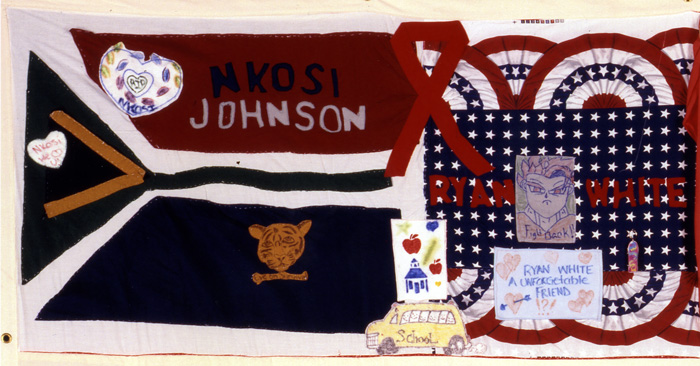 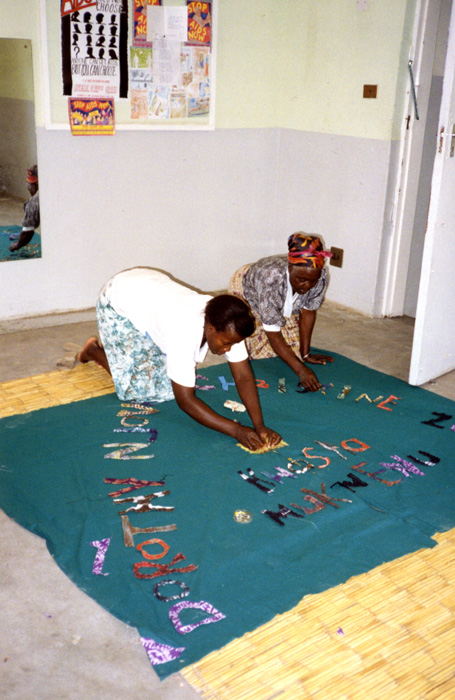 Panel made for Nkosi Johnson and Ryan White by B. Kraljic, block 05590. Born in South Africa in 1989, Nkosi Johnson was the longest-living person born with HIV when he died in 2001 at the age of twelve. Ryan White was born in the United States in 1971, contracted HIV from a blood treatment for his hemophilia, and died when he was eighteen years old in 1990. Denied admission to their schools because of their disease, both boys became symbols in their countries for the fight against HIV/AIDS and its social stigma. These schools later reversed their policies; Johnson and White continue to be public icons even after their deaths.
Photo courtesy of The NAMES Project Foundation
The Quilt is displayed in Zambia on World AIDS Day.
Photo courtesy of The NAMES Project Foundation

The Quilt has inspired many people to address the devastating impact of HIV/AIDS. In some countries, activists are adapting traditional art forms such as beading, embroidery, and weaving to create AIDS-specific artwork. Women’s collectives throughout South Africa have led many such endeavors and contributed funds raised from art sales to support those living with the virus.

Communities around the world are increasingly connected through collaborative projects and research, as well as shared symbols and observances. The red ribbon is an internationally recognized symbol of HIV/AIDS awareness and solidarity. Organizations, including the United Nations, empower individuals to further HIV/AIDS education, prevention, and treatment.

In 1988, James W. Bunn and Thomas Netter conceived the idea of World AIDS Day. These two men, both public information officers for the Global Program on AIDS at the World Health Organization in Geneva, Switzerland, took their idea to Dr. Jonathan Mann, director of the Global Program on AIDS (now known as UNAIDS). Dr. Mann liked the concept, approved it, and agreed with the recommendation that the first observance of World AIDS Day should occur on December 1, 1988. Now World AIDS Day is commemorated every year on December 1, and more than fifty countries are represented on The Quilt. Some of these countries and even others have adopted The Quilt model and maintain their own AIDS quilts.