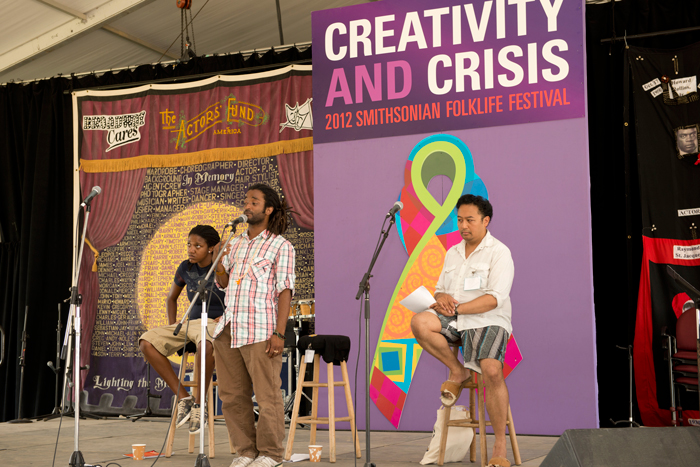 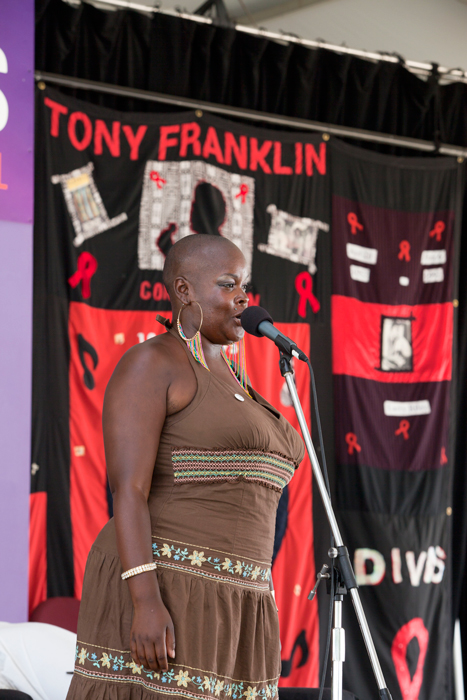 Five diverse and talented spoken word artists from the Washington, D.C., region contributed to the Creativity and Crisis program by performing their poetry on the Red Hot stage and discussing their art and activism in the Giving Voice tent throughout the 2012 Smithsonian Folklife Festival. Over the course of a few days, each poet performed work dealing with the topic of HIV/AIDS and addressed several relevant themes, including love, exclusion, stigma, health, identity, and empowerment. Through their performances and discussions with moderator Anthony Knight, the poets were able to contribute unique perspectives informed by their various individual experiences as artists, healthcare providers, educators, and HIV/AIDS activists.

For thirteen years, Dwayne Lawson-Brown has been using a variety of media, including hip-hop, poetry, and song, to make HIV/AIDS education accessible to young audiences. Of his work educating using spoken word, Brown says, “I work specifically with young people between the ages of 13 and 24... Spoken word is perfect for that because it can be funny, it can be dramatic, it can be whatever it needs to be in that moment. And for me, there are folks who will listen to one of my poems, but won't sit through a one-hour lecture on the ins and outs of what HIV is, what the four fluids are that transmit HIV, what sexual behaviors, how blood to blood contact can spread HIV. They won't listen to that. But if I say it in a rhyme, they digest it. And so, sometimes you just have to break things down into its simplest form and offer it in the most creative way and fashion possible and that's why spoken word works so well for me.”

Regie Cabico has established a career as an educator in addition to his work as a performer. Cabico frequently teaches poetry and drama classes to youth and conducts writing therapy sessions in hospitals. Informed by his experience growing up as a gay Filipino American, Cabico knows firsthand the power of poetry and spoken word to empower disenfranchised individuals, claiming that if it were not for poetry, he would not have a voice. He views spoken word as both a tool for healing and as the ultimate art form—capable of facilitating social change. Cabico emphasizes that for his students, the experience of expressing themselves through writing and spoken word is very empowering, especially when addressing difficult topics such as HIV/AIDS. “The fact that they have the permission to have an opinion, to be voiced and to be heard is powerful,” says Cabico, “When students are listening together, and they're being listened to, that’s like the best medicine. And I don’t think it's done enough. So as an educator in the classroom, I've seen spoken word be a powerful tool for students to really respect and to listen to each other and to celebrate difference.”

For Sonya Renee, a performance poet and transformational leader with a background in HIV/AIDS advocacy and education, poetry was a creative outlet that she stumbled upon by accident but eventually adopted as a career. Renee’s poetry is unabashedly affirming of the diverse differences that makes each of us a unique and valuable human being. Speaking of how she managed to merge her two seemingly unrelated lines of work, Renee says, “Most of my life has felt like choosing...the reality is that I have this art form, and I can do the work that I've been doing through this art form. I can talk about HIV and AIDS prevention, I can talk about destigmatization, I can talk about... ridding ourselves of body shame and all of these sorts of things through my artistic medium. I don't have to choose.” Renee believes that spoken word is an ideal medium to transmit messages and open up difficult conversations, noting that, “Art is a universal language. I think that there’s a commonality that happens in the beauty of artistic expression that surpasses all the dividers that exist between us: age and race and class and gender and sexuality and all of these sort of things that we have made barriers that need not be. Art sort of slices through all of those things and so what better way than to take this universal language to begin the process of talking about the things that are hard to talk about?” 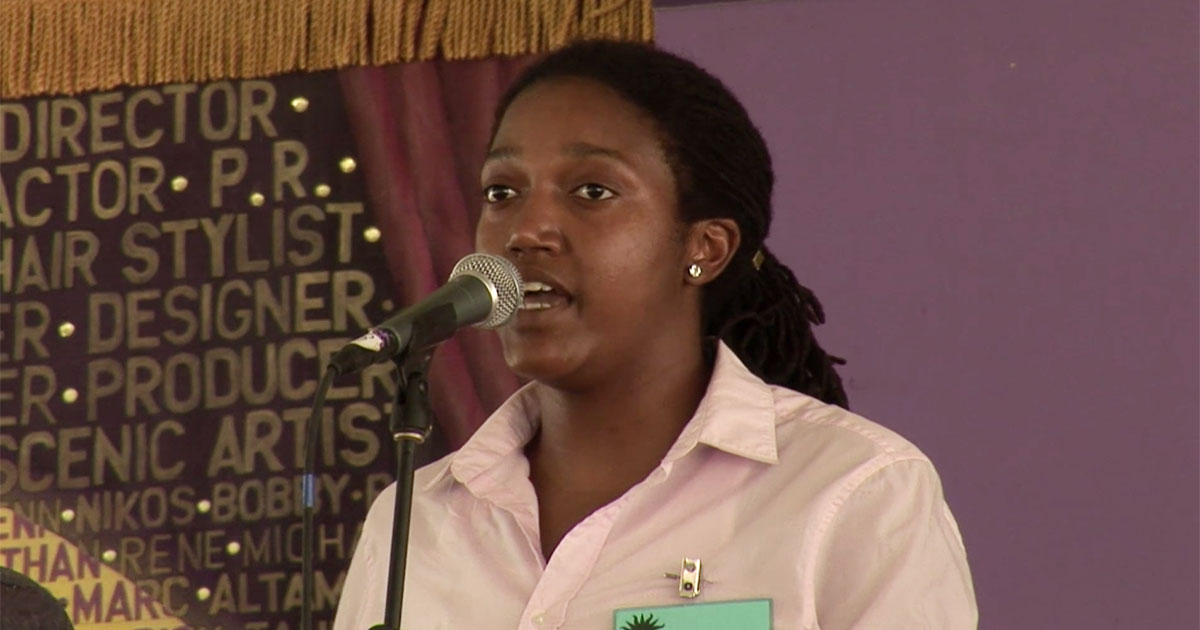 Mary Bowman is unique among the Creativity and Crisis spoken word artists in that her work is informed by her personal experience as an individual born HIV positive. Much of Bowman’s writing surrounds the topics of growing up with HIV and her relationship to her mother, who infected Bowman during pregnancy and died of AIDS-related illness when Mary was a child. Through her work as a writer, spoken word artist, and filmmaker, Bowman strives to engage the human side of the disease and put a face on HIV/AIDS, simultaneously educating audiences and reducing stigma. Explaining why she initially pursued spoken word, Bowman speaks of the healing powers of poetry, saying, “I wanted to tell my story. Because I felt like I had not had the opportunity to be vocal about my experiences growing up.” Her deliberate efforts to become an HIV activist through her poetry were prompted when audience members began approaching her after shows. “Through my testimony, I saw that it was affecting other people and other people started coming up to me and saying, ‘Thank you for sharing your story, this is my story.’ And you know, that just really was the start of me speaking about HIV through my poetry. And it's also just a fun way to promote awareness and to let people know what HIV looks like because I am HIV positive and a lot of it is my personal experience with living with HIV.” In the future, Bowman hopes to transform her spoken word performances into workshops to be used as a healing tool for people living with and affected by AIDS and HIV, particularly young people. She elaborates, “I think so many times, we hold our story to ourselves and we just live our lives thinking that we’re the only ones with this story when in fact if you tell your story, you’ll find out that more people than not have the exact same story that you do and they might be from across the world. And so telling your story might make someone else feel like they can tell their story.”

JT Bullock is a psychiatric nurse at George Washington University Hospital who has spent over a decade performing poetry and telling stories that are largely influenced by his work in the healthcare community, as well as by his personal experience growing up as a gay man in the South. One of the reasons Bullock has pursued spoken word as a medium is because he believes it is a more accessible medium than classic page poetry. Spoken word poetry has “reached more people from diverse backgrounds and has taken poetry out of the academy and into the streets.” He finds it to be a fitting medium of expression to address HIV and AIDS, which he encounters frequently through his work with the mental health population. “I think that as a nurse, sometimes you can only reach people so much in your professional setting even though I’m interfacing with people that are living with the disease... In poetry, I think it's less confrontational, less authoritative, and you can say things in a different way...  And I think that's what creativity does, it translates a message perhaps in a way that no one had ever thought of it before.”

Through their diverse styles of writing and performance and drawing on their individual backgrounds and personal experiences, Dwayne Lawson-Brown, Regie Cabico, Sonya Renee, Mary Bowman, and JT Bullock breathed life into Creativity and Crisis in the form of spoken word performances. On stage and in conversation, these artists conveyed their passion for activism, offered their various perspectives in an accessible manner, and demonstrated the power of art to change hearts and minds and to effect social change.

Lindsay Tauscher is an intern at the Smithsonian Center for Folklife and Cultural Heritage, where she assisted in the production of the 2012 Creativity and Crisis Folklife Festival program. She is assistant executive director of Capturing Fire, a national queer spoken word and poetry festival, and works for La-Ti-Do Cabaret, the District’s only weekly spoken word and musical theatre cabaret series. Lindsay is a graduate of Johns Hopkins University, where she double majored in History of Art and French and minored in Museums and Society.