Reflections from the Festival: Positive Perceptions

AIDS has been called both the “invisible epidemic” and the “epidemic of signification.” Those first affected by the disease came to be defined by the illness, their status as patient and victim often subsuming their identities. Indeed, the media and biomedical world have often constructed negative and limiting representations of HIV-positive individuals and the AIDS body. The AIDS Memorial Quilt thus began as a response to unsilence marginalized voices. Caretaker of The Quilt, Gert McMullin, commented on the initial motivation behind the project, “For me, it was because nobody was doing anything or seemed to care. We felt like abandoned...We did it so that we would be counted, and so they would see that we mattered.” Throughout the Creativity and Crisis program, artists strove to correct past misunderstandings of the virus by reminding the public that the HIV-positive body can still be whole and beautiful. Participants featured at the Festival reasserted their independence by using art to represent HIV-positivity, rather than remaining passive objects of scrutiny. 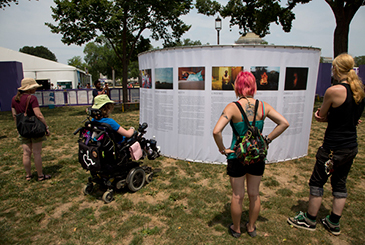 Many of the projects involved with this program aimed to destabilize this issue of invisibility and misrepresentation. Jane Solomon’s Body Mapping project was one of self-empowerment, which enabled disadvantaged, HIV-positive women to determine the ways their bodies were perceived and interpreted. Through the therapeutic artistic process, the virus is transformed so that the women transcend the infection to emerge positively radiant. As Stephanie Laster notes of her quilted Body Map, “She is the me I made. She is how I see me versus how you see me." Billy Howard’s book Epitaphs for the Living also included photography and narratives of those infected. His black-and-white images are ethereal and arresting, framed by the stories the collaborators chose to tell. As Howard notes of his initial motivation behind his work, “That's all I could hope to do, was open people up to the possibilities that this was something that was very human. And the first images that came out about the AIDS crisis always dealt with the devastation of the disease. So they would take people at the end stage of AIDS, which was often a very dehumanizing moment where people's bodies were ravaged. They hardly look human anymore. And so when you're confronted with a picture like that, it's hard to identify with that person. That's the Other; this is a part of the Plague, this is a disease. And you're only seeing the disease. And I didn't want to do that. I didn't shy away from that but I tended to get people that were—they looked like you and me. They're healthy looking people, they just happen to have this disease.” 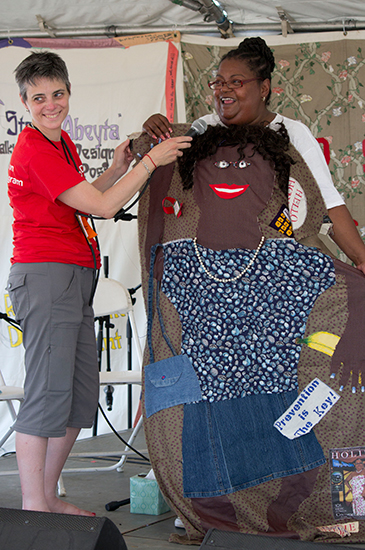 This year’s Common Threads tent and featured A.R.T. Show also dealt with issues of representation and empowerment. The Through Positive Eyes project in particular, placed cameras in the hands of HIV-positive Washingtonians, so that they could determine how to portray themselves. “Artists have this gift of being storytellers,” says Elizabeth Nails, co-producer of the project. “They provide us with a human level of what it could be like to live with this virus.” This year’s Festival demonstrated that works of art can transform attitudes and alter perceptions of the AIDS body into something singularly beautiful, and resilient.

Emma Backe interned at the Smithsonian Center for Folklife and Cultural Heritage in 2012, where she worked on the Creativity and Crisis program. She is a senior at Vassar College, where she studies anthropology and English literature.

Read more about people and projects featured at the Festival: