Everyone would agree that the four-character idiom is the first step to understanding thousands of years of Chinese culture. Similarly, colloquialisms in Hong Kong provide a key to understanding Hong Kong culture. We often encounter two idioms in traditional tales—“Look up to the sky as you conduct your life” and “carry out justice for the heavens.” When I was a kid, I often asked what “sky” and “heavens” stand for. Do they mean the weather? Do they mean indisputable authority? Why “Son of Heaven [emperor]”? What is the “owner of Heaven [God]”? Why “Son of Heaven”? Between Son of Heaven and the owner of Heaven, who is more powerful? My childish opinion was that the idiom “look up to the sky as you conduct your life” is to remind us to watch the weather forecast, as it can help us determine whether or not to carry an umbrella when we go out; perhaps I understood the sky to represent seasons, sun, and rain, which predicts the yearly harvest. Could the pessimistic expression “look up to the sky as you conduct your life” refer to “the sky holds unpredictable weather” [accidents happen], hence the sayings “the will of Heaven is difficult to predict” and “heaven and earth are unkind”? “Look up to the sky as you conduct your life” therefore instigates the pessimistic, subjective view of fate and destiny, fostering rituals of praying and worshipping the higher power or superstitious beliefs in the spokesmen of gods and higher authorities, and such social phenomena. Yet folk wisdom is nevertheless profound and lasting. Through practice and experience, ordinary people began to analyze astronomy, geography, the seasons and climate. They began to understand the ecology of community, handling the challenges brought forth by the “heavens” with an objective attitude. The creativity in folk tradition is endless, and vernacular knowledge is pragmatic, applied knowledge. Folk culture is the culture of survival that combines knowledge and implementation. Whether a ritual practice or a craft tradition, it is in and of itself a bottom-up, organic form of art. 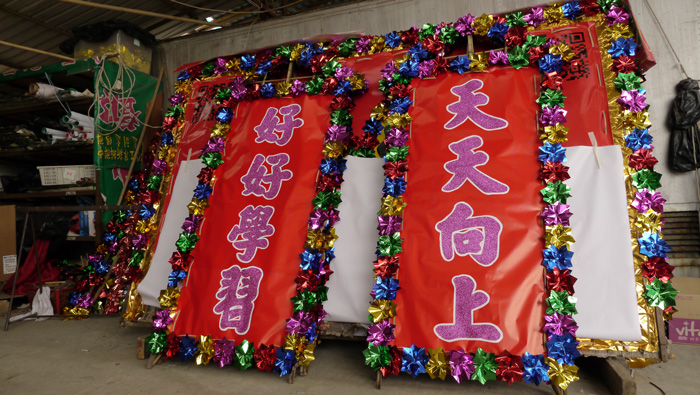 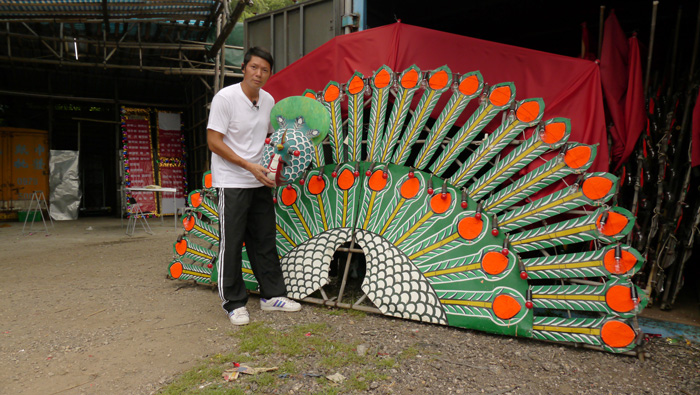 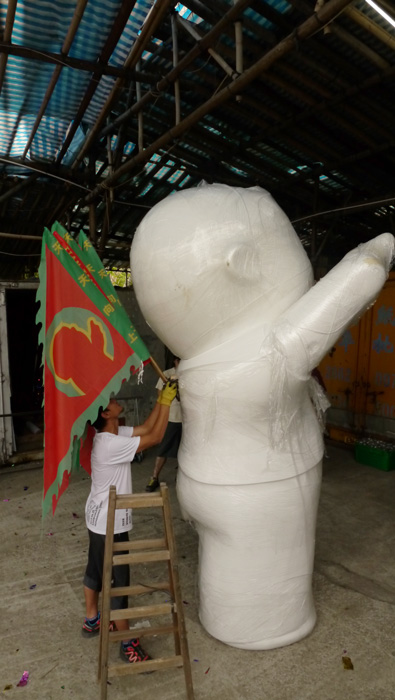 I believe creative work could be objective. Similarly, the idiom tian tian xiang shang [everyday progress] can also be just as objective as the Hong King colloquialism “things to know before entering the gateway” [getting started] ; it can be just as dialectic and pragmatic. The installation I created for the Smithsonian Folklife Festival begins with the idea of “everyday progress” and “getting started.” My piece is a large-scale gate—basically constructed with bamboo sticks—that is six meters deep, ten meters tall, and thirty-three meters wide. With bamboo, I combine the technique of Hong Kong bamboo scaffolding and the craftsmanship of the flower plaque; I synthesize visual art and sound art that both build on the bamboo element. This is an installation experiment that merges traditional creativity with contemporary creativity. Bamboo scaffoldings, flower plaques, and bamboo wind chimes are all some of the most remarkable artistic crafts in southern China’s folk applied art. They are aggregates of narratives created in response to folk community rituals and temporary installations. On the basis of folk art, these artists’ works—aside from developing materials and construction techniques and investigating the history of traditional craft and recycled arts—indirectly leave a “contemporary” caption in folk eco-aesthetics.

Congratulatory text and greetings play an important part in traditional flower plaque. All the greetings I choose have to do with the character tian—day, the sky, the heavens. The greeting shown in the largest font is tian tian xiang shang, hao hao xue xi [everyday progress, diligent learning]. The second tier of text is filled with idioms and colloquialisms that begin with the word tian. I selected sixteen phrases from the sixty-four idioms starting with the word tian used in an idiom game I created recently. These include “god kindly grants beautiful weather” (tian gong zuo mei), “flying horses walking the sky” (tian ma xing kong) [meaning infinitely imaginative or unrealistic], “heaven is just and earth is fair” (tian gong di dao), “heaven and earth, completely different” (tian shang ren jian), and so on. The medium-font text shows supporting or sponsoring organizations, as in traditional flower plaques. Such organizations include the Art Beatus Gallery, Federation of Hong Kong Industries, The Koo Foundation, and West Kowloon Cultural District. The small-font text lists all the participating individuals and groups at this year’s Smithsonian Folklife Festival China program. Finally, I filled the top banner with quotes like “Heaven and Earth are impartial; they regard myriad things as straw dogs” from Dao De Jing (Tao Te Ching). I believe creative work is fundamentally close to the philosophies of Laozi and Zhuangzi—its essence is to follow nature’s pattern and go with the flow, rather than protest against nature and obstruct the flow. Therefore I think the quotes make an appropriate heading for this piece. The mixing and intermingling of these at once serious and playful words echoes the clashing and contending bright red, emerald green, and golden yellow, flashing out the powerful force of folk art.

The traditional spirit of folk creative work in Hong Kong is rooted in bold experimentations, open and limitless interactions, collaborations and dialogues. Chinese traditional vernacular art similarly favors candidness and collaborative work, qualities of which is certainly a manifestation of contemporary concepts of dialogue and collaboration.  To be honest, the inclusive and tolerant nature in Chinese folk art also embodies a tacit rebellion. And owing to this rebellious vitality, folk art gradually crystalizes into the unique vernacular wisdom we witness today. In the surface disarray and tediousness of folk art and amidst this crude and glamorous cacophony, we recognize order.

Years ago, inspired by the saying tian tian xiang shang, I created this mouth-less kid Tian Tian, which later developed into the statue that looks up and points to the sky. Two years ago, I extended an open invitation to friends who come from various age groups, backgrounds, and social strata in Hong Kong sharing a smiliar creative interest to modify and add their own creative spins and twists to their individual Tian Tian statues. These refashioned statues, which appeared in shows in Hong Kong and Milan, exhibit the current trend in Hong Kong. [For the 2014 Smithsonian Folklife Festival,] I selected thirty-two of these works, incorporating them in this “Tian Tian Xiang Shang Gateway” installation. Through the Tian Tian statues created by thirty-two collaborators and myself, visitors should be able to get a glimpse of Hong Kong and its multifarious and diverse vitality.

I see those who invented pen, ink, paper, and such tools as creative individuals; those who curated gallery, museum, and festivals are certainly also creative individuals. Those who first started the work of cultural criticism and artistic innovation are surely cultural workers with vision and strategy. Those who fine-tune cultural policy, promote culture, and endeavor to cultivate a cultural environment are still without a doubt critical cultural workers. These workers are true artists of everyday progress (tian tian xiang shang).