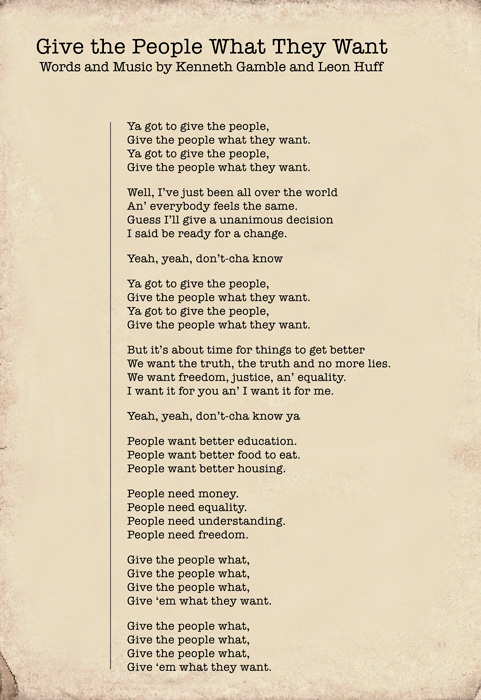 James Brown was known by many honorific titles, including “The Hardest Working Man in Show Business” and the “Godfather of Soul.” His music, dance, and high energy performances influenced popular music worldwide.
Photo courtesy of Indiana University Archives of African American Music and Culture, George Nelson Collection
Kenneth Gamble and Leon Huff, founders of Philadelphia International Records, wrote songs with lyrics that were meant to raise social and cultural awareness, such as the 1975 release “Give the People What They Want.”
Lyrics ©1975 (Renewed) Warner-Tamerlane Publishing Corp. (BMI)

The history of rhythm and blues reflects changes in the social, economic, and cultural life of African Americans. Its early development occurred with the migration of African Americans from southern and rural regions to cities on the east and west coasts and in the Midwest in search of job opportunities during and after World War II. These expanding African American urban communities with increased economic resources presented a large audience hungry for social interaction with music and entertainment. Cross-generational groups of musicians with their songs of love, longing, and the excitement of new experiences provided musical affirmation for them.

While rhythm and blues was not explicitly political from the late 1940s through the 1950s, its appeal across racial divides linked American youth of all races and ethnic backgrounds. By the 1960s, as the civil rights movement focused America’s attention on the moral contradictions and racial inequity within society, rhythm and blues artists began to address issues beyond interpersonal relations and group camaraderie.

Throughout its history, the sounds that define rhythm and blues have derived from a range of musical characteristics, instrumentation, and ensembles, varying in size from tight piano trios to groups with full rhythm and horn sections. Rhythmically, it encompasses a wide breadth from blues shuffles with a back beat, to boogie-woogie, modified rumba rhythms, and syncopated variations of eight-beat rhythm patterns. At its core, rhythm and blues is dance music that compels the listener to respond. And it is the creative melding of antecedent song forms—including blues, gospel, and swing—with new innovations that keeps its evolving sounds contemporary.