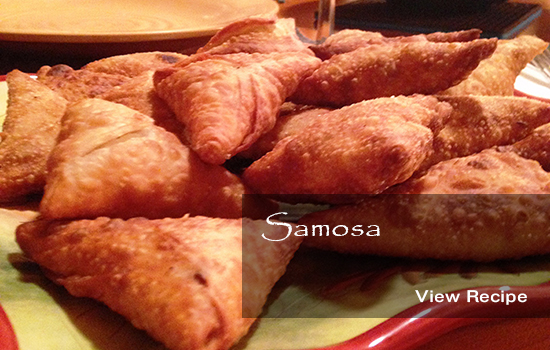 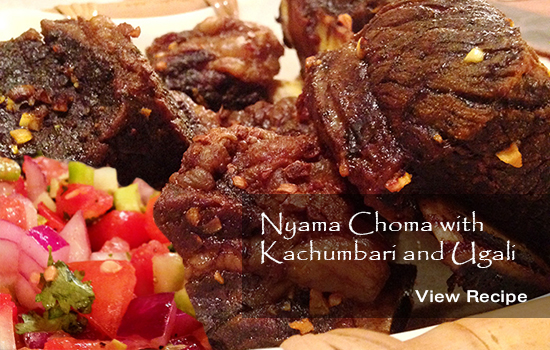 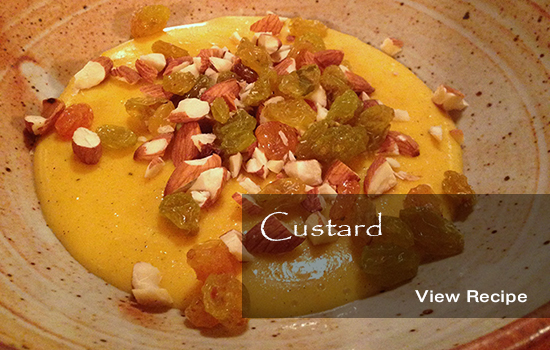 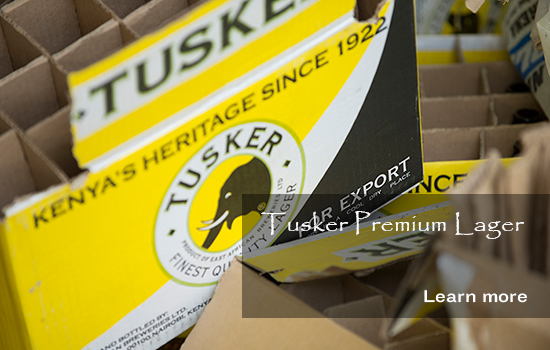 Uplands cuisine has a refined simplicity to its flavors and preparation process. Foods such as ugali and grilled meats with onion and garlic as complimentary flavors are staples in the diets of Western Kenyans.

Kenyan cuisine has a strong Indian influence due to the arrival of Indian merchants and immigrants in the late nineteenth century1. There are several different types of samosas one can make: fish, chicken, beef, or vegetarian. This snack can be eaten as a light meal, an appetizer, or served as a treat when company visits. Click to view recipe.

Nyama Choma with Kachumbari and Ugali

“If you haven’t eaten it, you haven’t been to Kenya”
Nyama choma is a traditional Kenyan food. Originally, male hunters cooked game meat over a fire while they were on expeditions. They enjoyed it so much that the practice was brought back to the home. Today it is eaten on special occasions, such as a weekend family get-together, with the staple food ugali (mashed cornmeal) and the fresh vegetable salad, kachumbari. In Kenya, it is generally the men who do the grilling outdoors, while munching on the meat and gossiping; at the Festival, the female Kenyan cooks joked that the men would eat all the good cuts of meat while cooking and leave the lesser cuts for the women and children. Nyama choma is best paired with a few pints of the Kenyan beer, Tusker. Click to view recipe.

Custard is one of the many desserts served to company. Though desserts are not a primary part of Kenyan meals, something sweet is often desired after a meal. Click to view recipe.

“Refresh your roots” 2
Tusker Premium Lager was the first brewed beer by Kenyan Breweries, now East African Breweries Limited. During a hunting expedition in 1922, co-founder George Hurst was killed by an elephant; his brother, Charles, later decided to name this first brew Tusker in memory of this tragedy. This mildly hoppy pale lager3 is made out of one hundred percent locally grown African ingredients4 and is a popular drink for barbecues and warm African afternoons and evenings. As stated in the brand’s positioning statement, “For consumers who are truly nationalistic, brand Tusker is the beer that provides an everlasting bond of deep, natural friendship with their countrymen because only Tusker Lager uniquely represents a true and refreshing spirit of national heritage."5