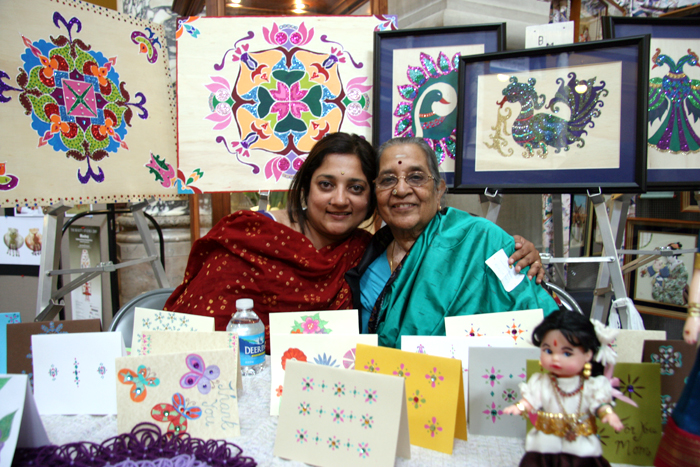 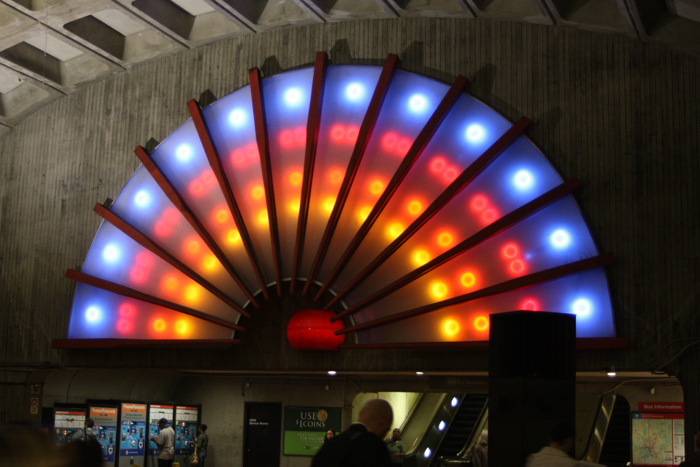 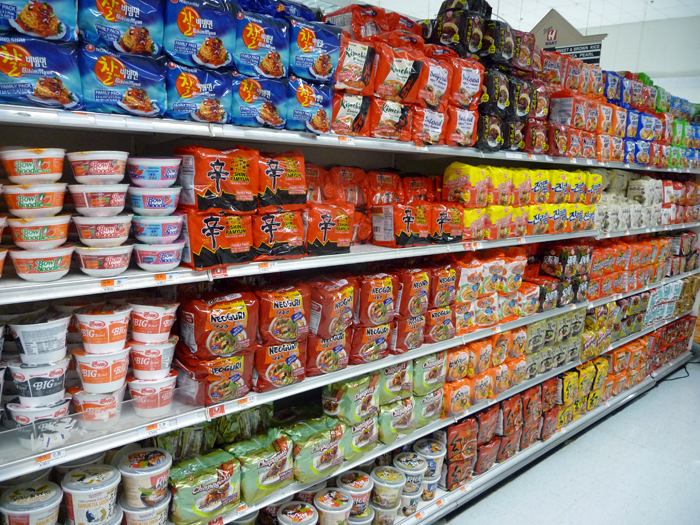 Nisha Rajam and her mother, Malathy Venkatran, have roots in southern India but now live in Maryland. They displayed these traditional kolam patterns at the 2010 Asian Heritage Festival at the Smithsonian National Museum of Natural History. The entrances to many homes in southern India use these same patterns and designs to keep away evil spirits.
Photo by Laura Levi Zonis
The Glory of the Chinese Descendants is a large wall sculpture created by Chinese American artist Foon Sham for the entrance to the Gallery Place-Chinatown Metro station in Washington, D.C. By evoking traditional Chinese objects—such as fans, chopsticks, and lanterns—the sculpture pays homage to Chinatown’s early residents.
Photo by Pete Reiniger, Smithsonian Institution
Markets that cater to Asian immigrants may also introduce new taste treats to non-Asian customers, thereby shaping both palates and cultural sensitivities.
Photo by Steve Francis

The practice of sending messages, money, packages, and photos across thousands of miles did not begin with the advent of the Internet or global shipping companies. Immigrants to America from Asia and the Pacific Islands—known collectively among themselves as Asian Pacific Americans or APAs—started some of these international business practices in the sixteenth century and perfected them by the second half of the nineteenth century.

Local lives and global ties meant that even as these early immigrants' boots were muddied in the California lettuce fields by day, their thoughts would fly each night like sparks from a campfire to loved ones across the Pacific.

Today, whether an APA family has been living on these shores for five generations or just one, advances in global travel and communications make it more likely that cross-Pacific influences can be preserved. If an APA person has an Asian lineage combined with one that can be traced to Africa, Europe, or South America, these same advances make easier the exploration and celebration of multiple ancestries.

As you walk around the APA program today, imagine for yourself what the primary strategies for adaptation and change were for your family when they first came to these shores. How have you contributed to preserving or adapting the traditions of your own family?