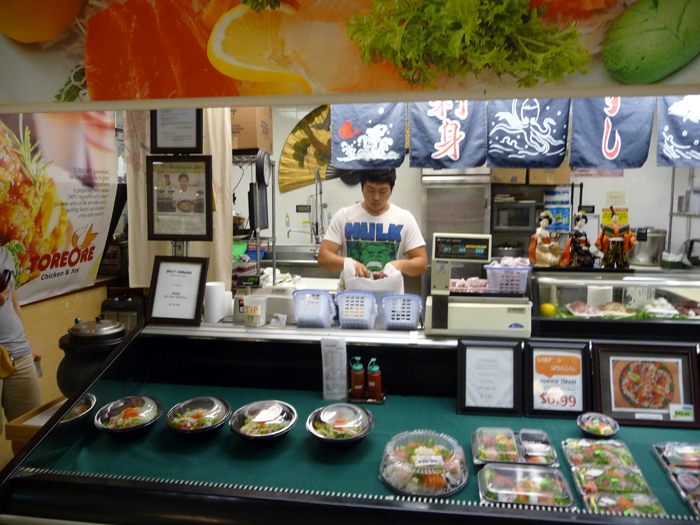 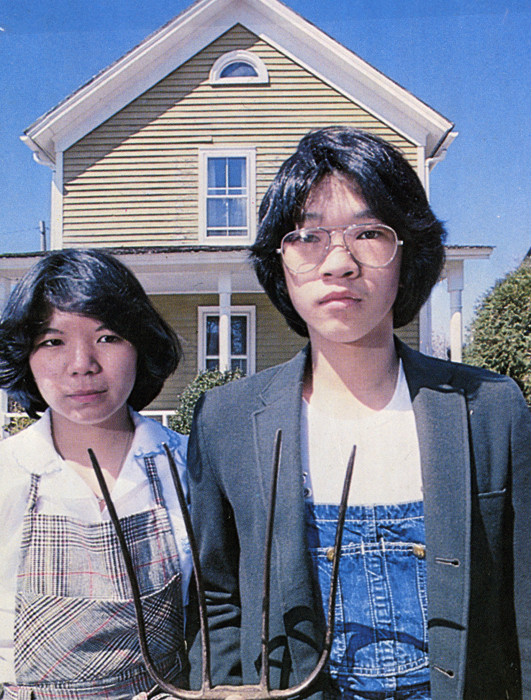 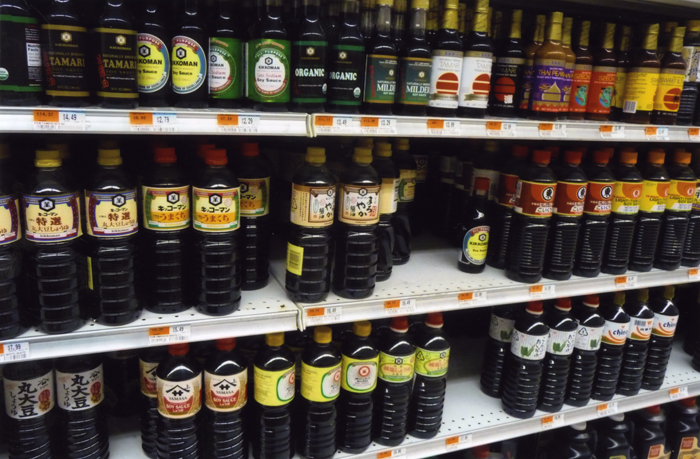 Few Americans would have known the word sushi thirty years ago. Today, this Japanese delicacy can be found in many D.C. area supermarkets as well as in specialty stores such as this one.
Photo by Steve Francis
The cover of Eleanor Wong Telemaque’s book, It’s Crazy to Stay Chinese in Minnesota, parodies Grant Wood’s American Gothic (1930).
Courtesy of Eleanor Wong Telemaque
This grocery store shelf illustrates the great variety in Asian and Pacific Islander cooking styles and ingredients. All soy sauces contain fermented soybeans, water, and salt, but their flavors vary by cultural group.
Photo by Steve Francis

Each Asian nation and Pacific Island group boasts its own distinctive cooking traditions. For instance, the aroma of hot naan bread emerging from a Tandoori oven bears no resemblance to the scent of Korean bulgogi or fried Pad Thai noodles. However, the cuisines of Asia and the Pacific Islands do share some common characteristics: fresh ingredients, large quantities of vegetables, less meat, and vegetarian alternatives.

Beyond that, as those who take the time to explore the foodways of the Asian Pacific American community soon learn, generalizations rarely apply. Just as Koreans have dozens of kimchi varieties, not just the most-prevalent cabbage version, so too are there many different ways to prepare "Indian food" and "Chinese food."

In It's Crazy to Stay Chinese in Minnesota, Eleanor Wong Telemaque's classic story of growing up Chinese in the Midwest in the 1940s, the author describes the ways in which local ingredients and recipes supplemented traditional Asian menus. The Wong family's Canton Cafe, located in Albert Lea, Minnesota, on the Iowa border, fed its Midwest clientele the usual shrimp fried rice and chicken lo mein. But the restaurant also specialized in milk-fed breaded veal sandwiches.