Bhutan: Land of the Thunder Dragon 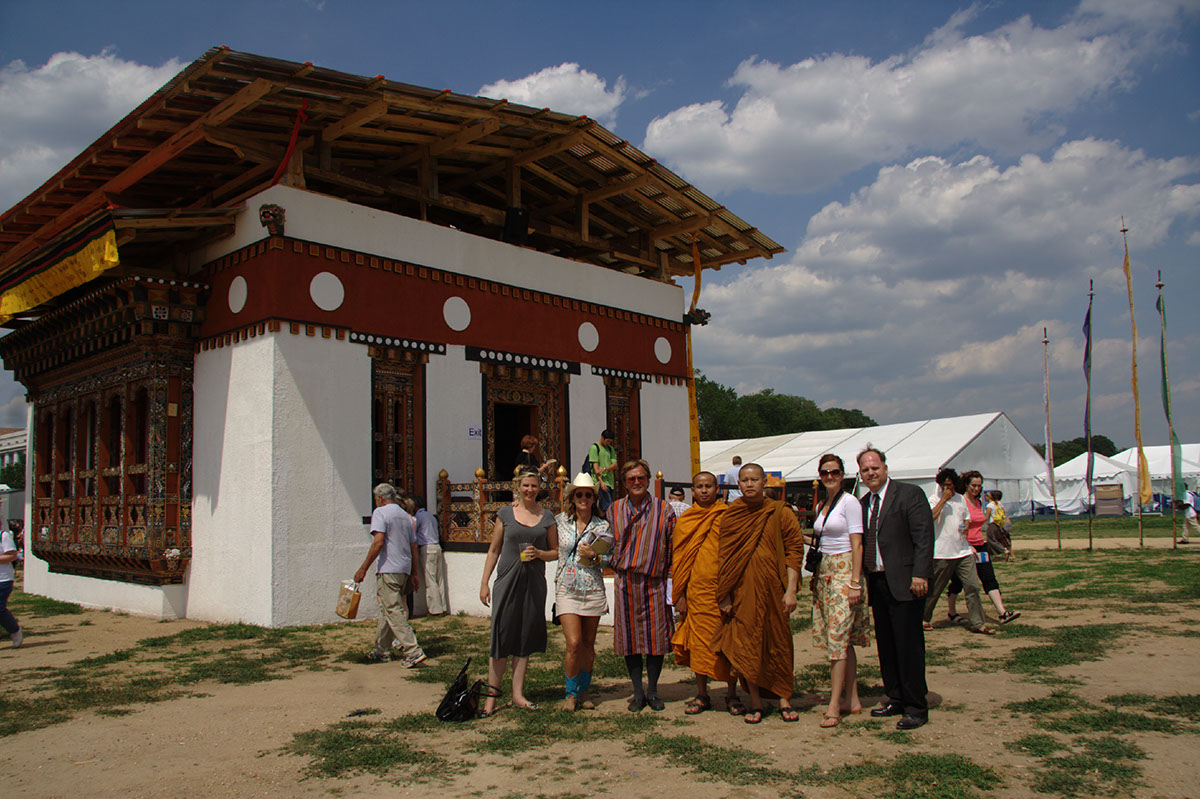 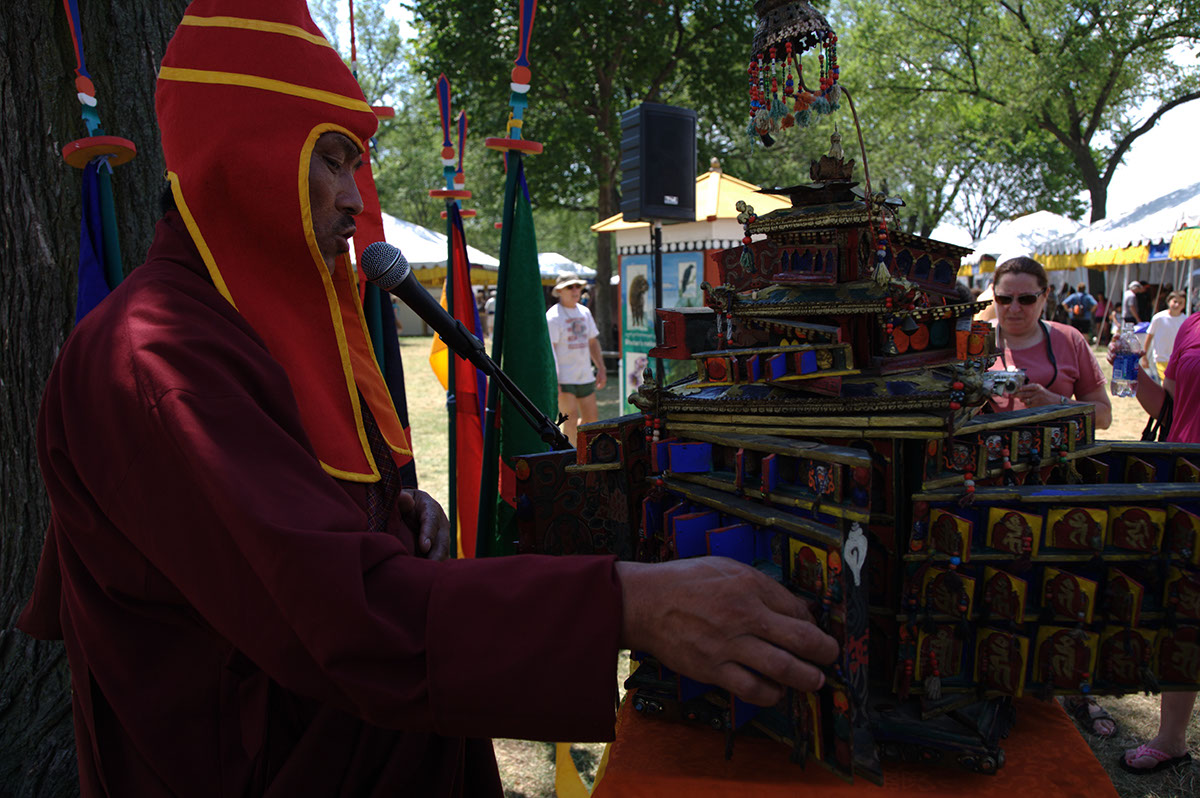 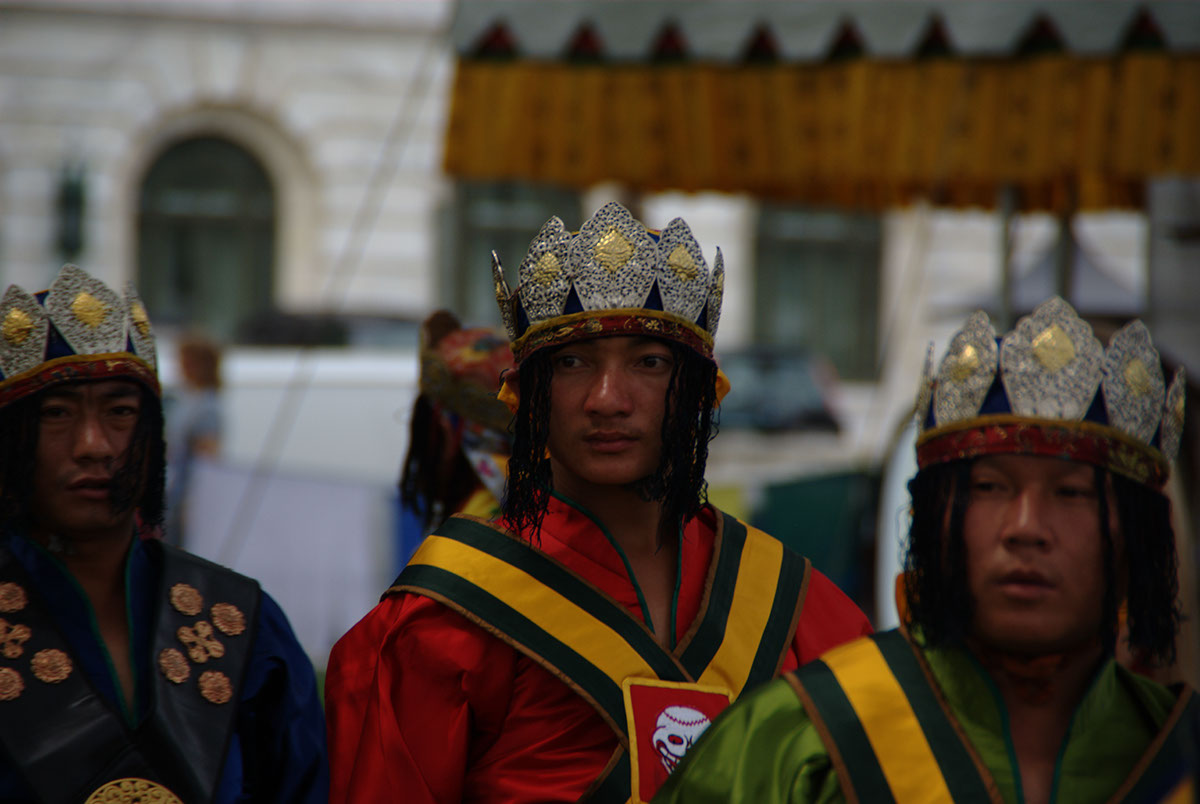 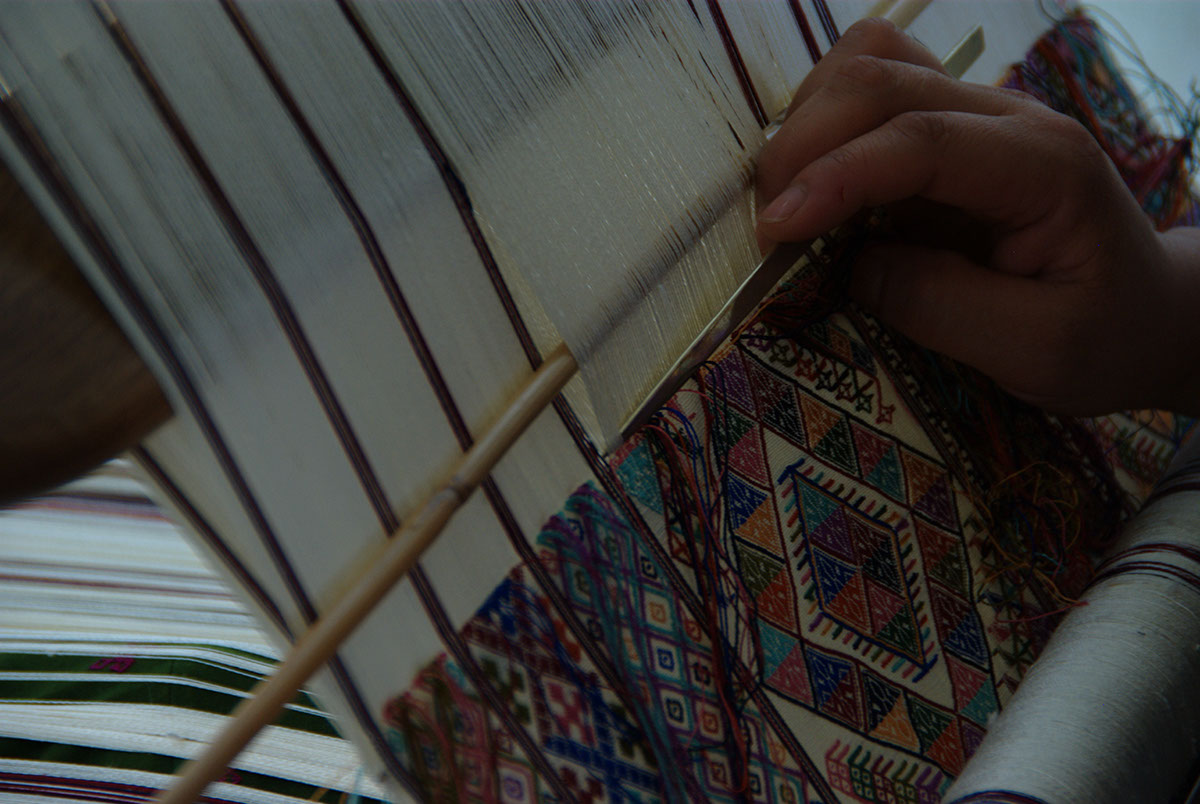 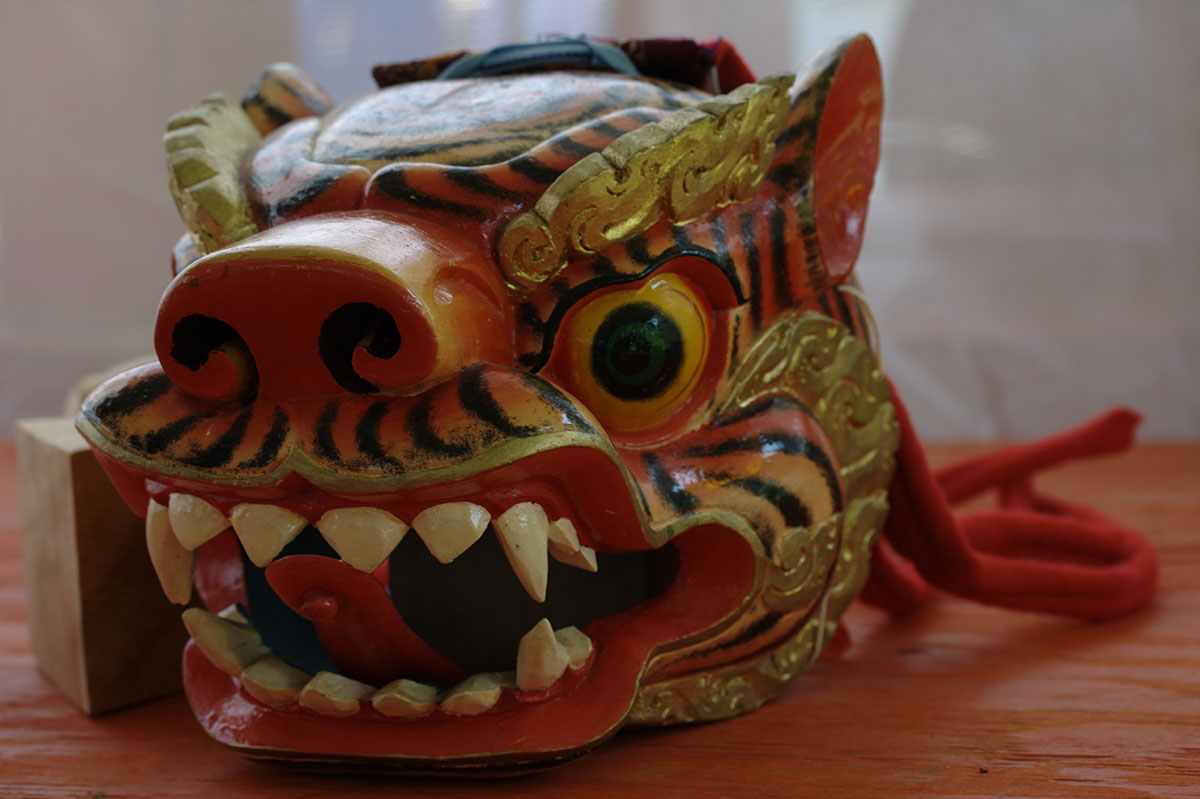 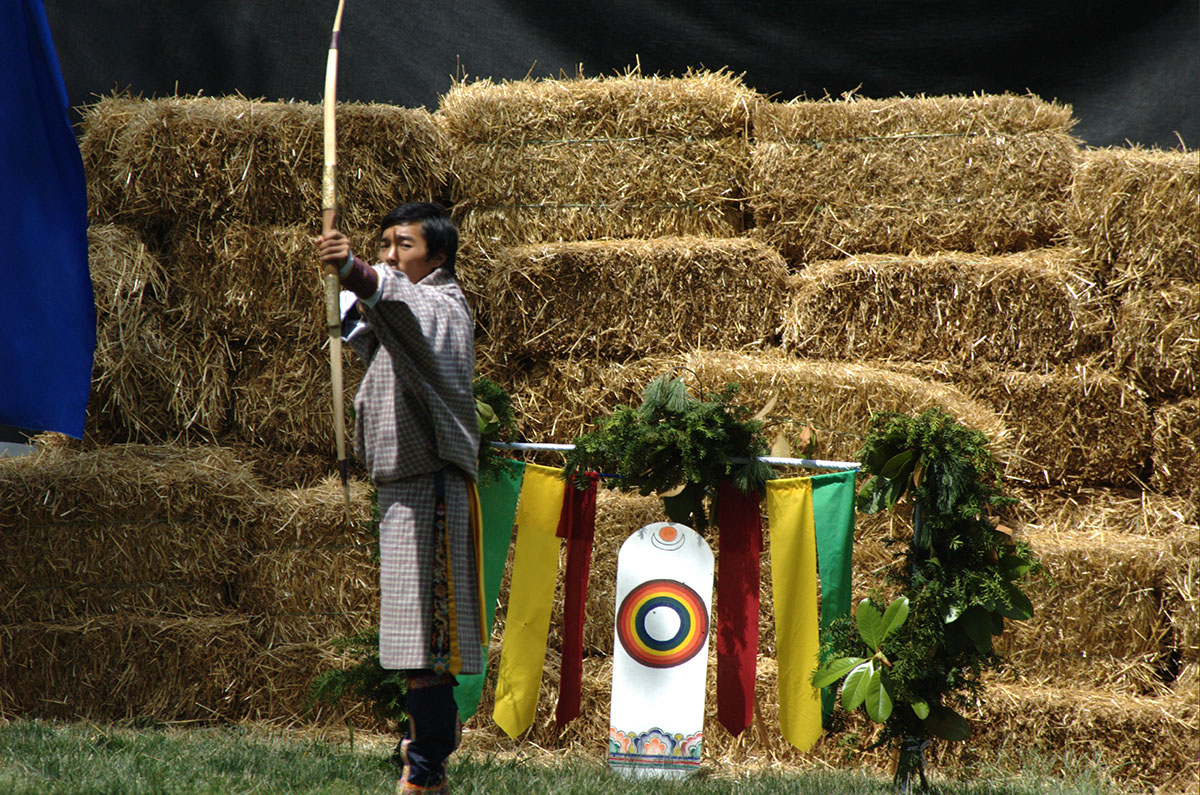 The Bhutan program at the 2008 Festival was the largest and most comprehensive celebration of Bhutanese life and culture ever presented outside of the kingdom. One hundred and fifty Bhutanese participants provided Festival visitors an unparalleled opportunity to see, hear, touch, smell, and experience life in the “Land of the Thunder Dragon.”

The program started each Festival morning with an elaborate ceremonial procession to honor important guests. Accompanied by blaring monastic trumpets and framed by the U.S. Capitol, Washington Monument, and dozens of fluttering colorful prayer flags, the Bhutanese participants proceeded to the Bhutanese temple, where each day they recognized the chief guests. Festival audiences enjoyed Bhutanese music and dance, arts and crafts, spiritual and religious traditions, traditional medicine, food, storytelling, and recreational activities. Every day, live reports were sent to Bhutan to broadcast on Bhutan’s national television station.

Bhutan’s thirteen traditional arts were presented in a shaded area near the temple, where visitors could mingle with some of the country’s finest weavers, painters, sculptors, carvers, cooks, and other artists. Under the trees, visitors also encountered an ancient box of many doors representing the Buddha’s understanding of the many paths to enlightenment and a chanter who called people to ponder the box’s mysteries. Traditional yak herders from the highlands welcomed guests into their yak-hair tent and entertained them with stories and lively antics. Nearby, some of Bhutan’s best cooks shared their stories about food in Bhutan around a traditional clay stove. Practitioners of Bhutanese traditional medicine also shared ancient Buddhist teachings and their knowledge of the many natural compounds found in Bhutan's flora and fauna.

The Four Friends Stage, named after a Bhutanese tale that celebrates social and environmental harmony, was the gathering place for lively discussions about traditions and contemporary issues, including Bhutan’s voluntary transition from absolute monarchy to democracy, the meaning of “Gross National Happiness” (an official government policy articulated by Bhutan’s Fourth King), and the importance of environmental and cultural resources. The Tsechu Stage was the venue for Bhutanese music and dance traditions. Musicians, singers, and dancers from Bhutan’s Royal Academy of Performing Arts demonstrated traditional Bhutanese folk dances, and Bhutanese monastic dancers performed sacred masked dances rarely seen outside of Bhutan.

Bhutanese hospitality was evident in the many activities designed for children and adults. With the help of Bhutanese children, families colored Bhutanese postage stamps and made prayer wheels. Archery, the country’s national sport, was played daily. Bhutanese archers dazzled spectators by hitting a target the size of a breadbox nearly a football field away.

The program was produced in partnership with the Royal Government of Bhutan. Major Donors to the program were the Bhutan Department of Tourism and the Dancing Star Foundation. Donors included the Bhutan Foundation and an anonymous donor. Contributors to the program were the Frank W. Hoch Trust, the Shelley & Donald Rubin Foundation, Lawrence Small, and the Summit Fund of Washington. Additional support was provided by the Himalayan Youth Foundation, Eva and Yoel Haller, Friends of the Royal Textile Academy of Bhutan, Exclusive Resorts, Francis and Kathleen McNamara, New Tourism & The Harmony Project, the Sager Family Foundation, Butterfield & Robinson, The University of Texas at El Paso, and Aman Resorts.

More than a thousand years ago, the great Indian teacher Padmasambhava came to the remote part of the eastern Himalayas now known as Bhutan. Although ...

Treasures of the Thunder Dragon

Ashi Dorji Wangmo Wangchuck
Her Majesty the Queen of Bhutan

For more than forty years, the Smithsonian Institution's annual Folklife Festival has afforded peoples around the world the opportunity to share their living ...

A Meditation in Dance

The drametse ngacham is a dance form that originated in Bhutan five centuries ago. Today, the Institute of Language and Cultural Studies is documenting the ...

The artistic traditions of Bhutan have been kept alive, promoted, and further developed because they are useful, ennobling, and inspirational. In fact, ...

From explorers to mountaineers, from environmental specialists to trekkers, from culture-hungry adventurers to seven-star jetsetters--Bhutan's tourism continues