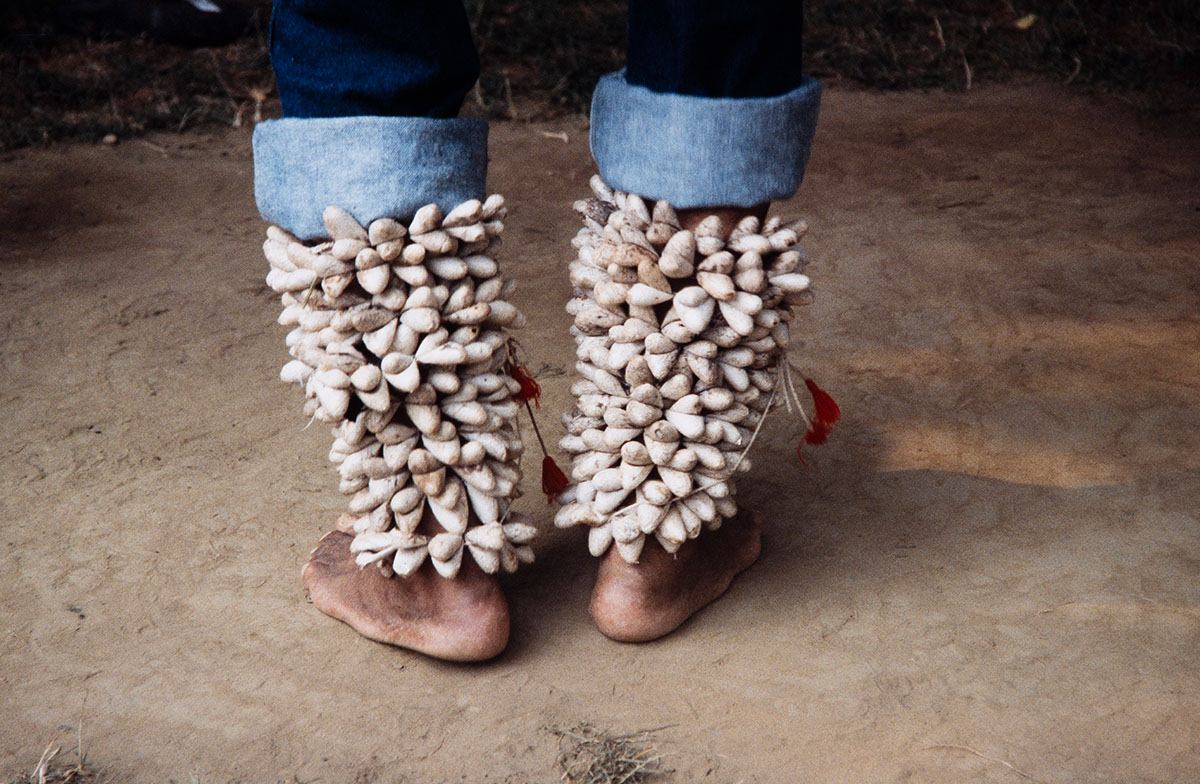 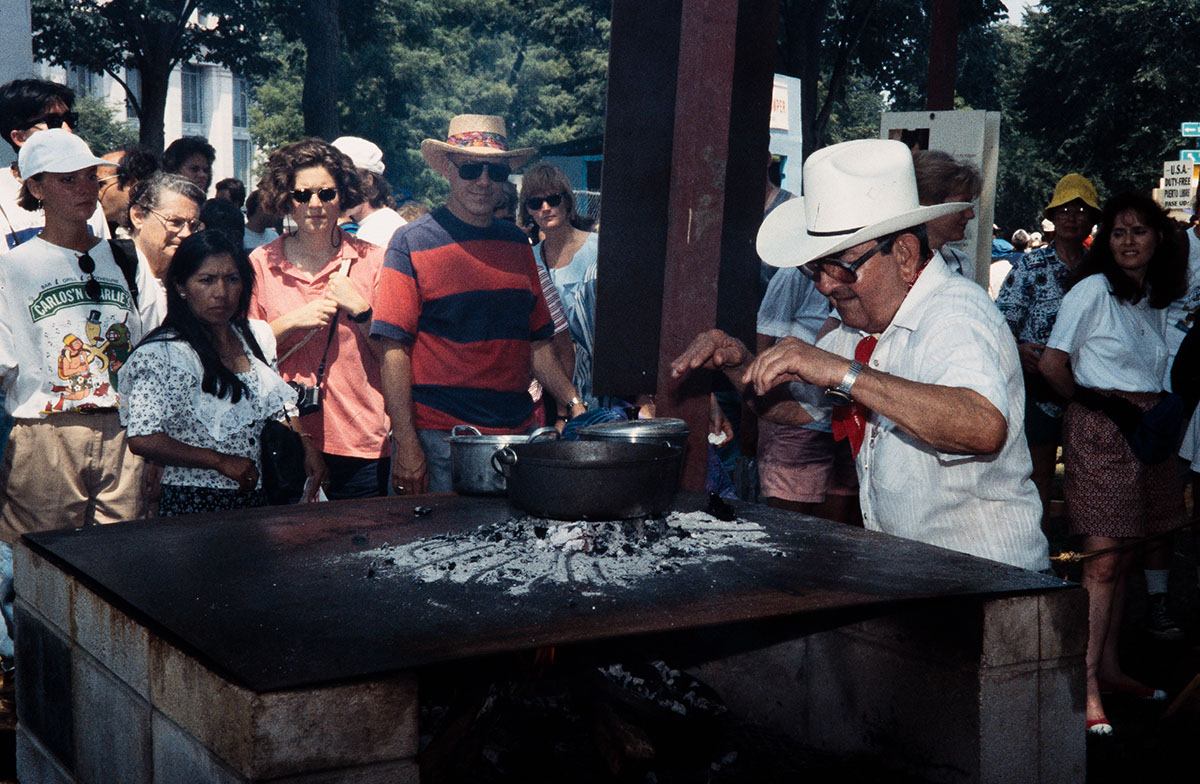 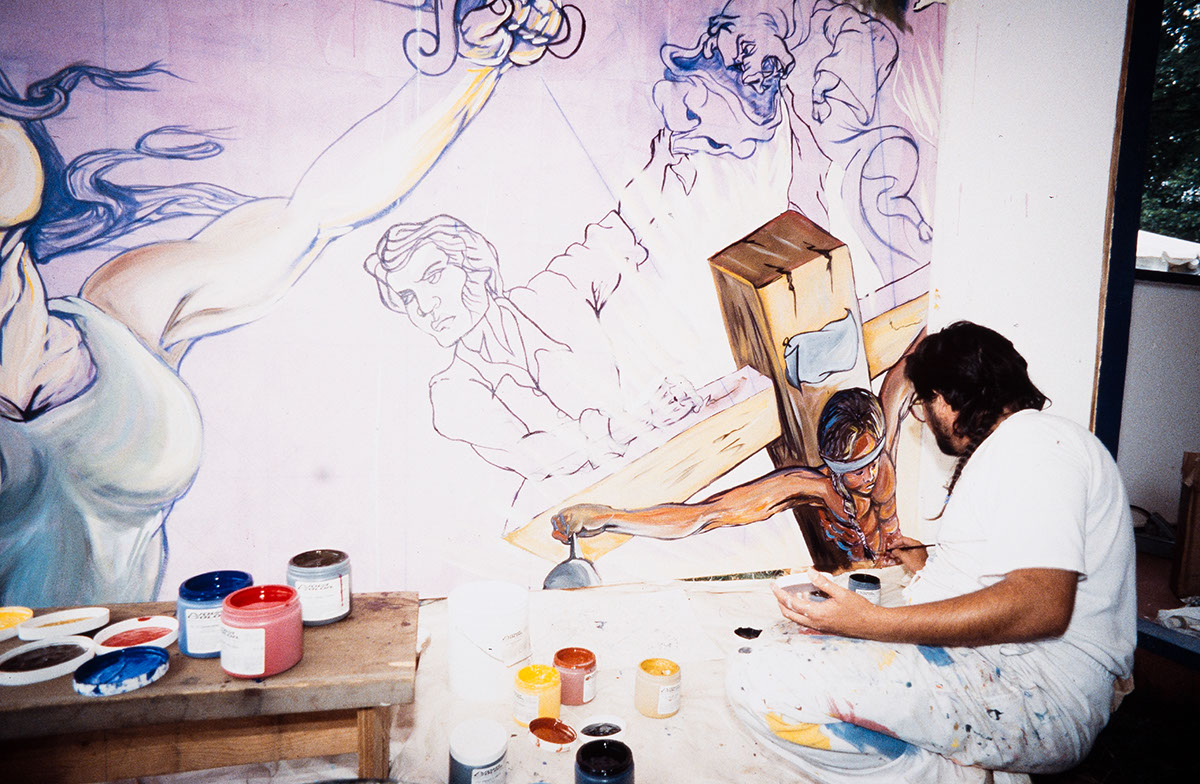 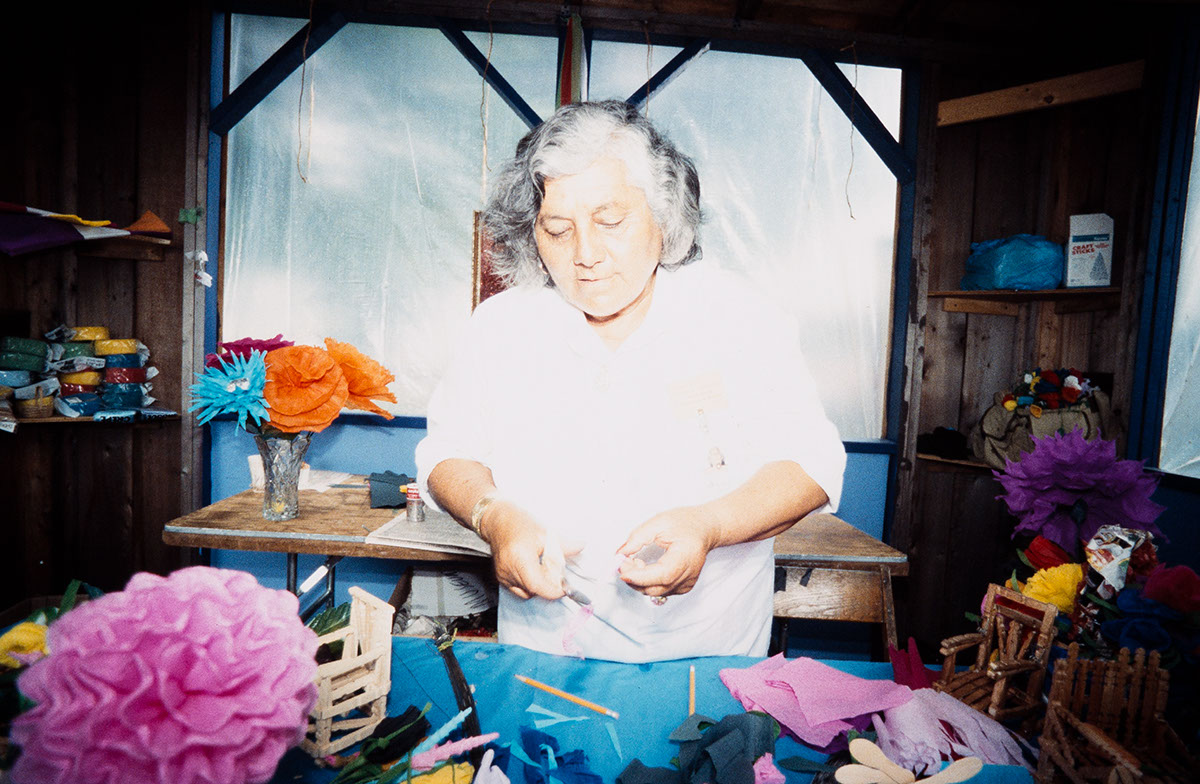 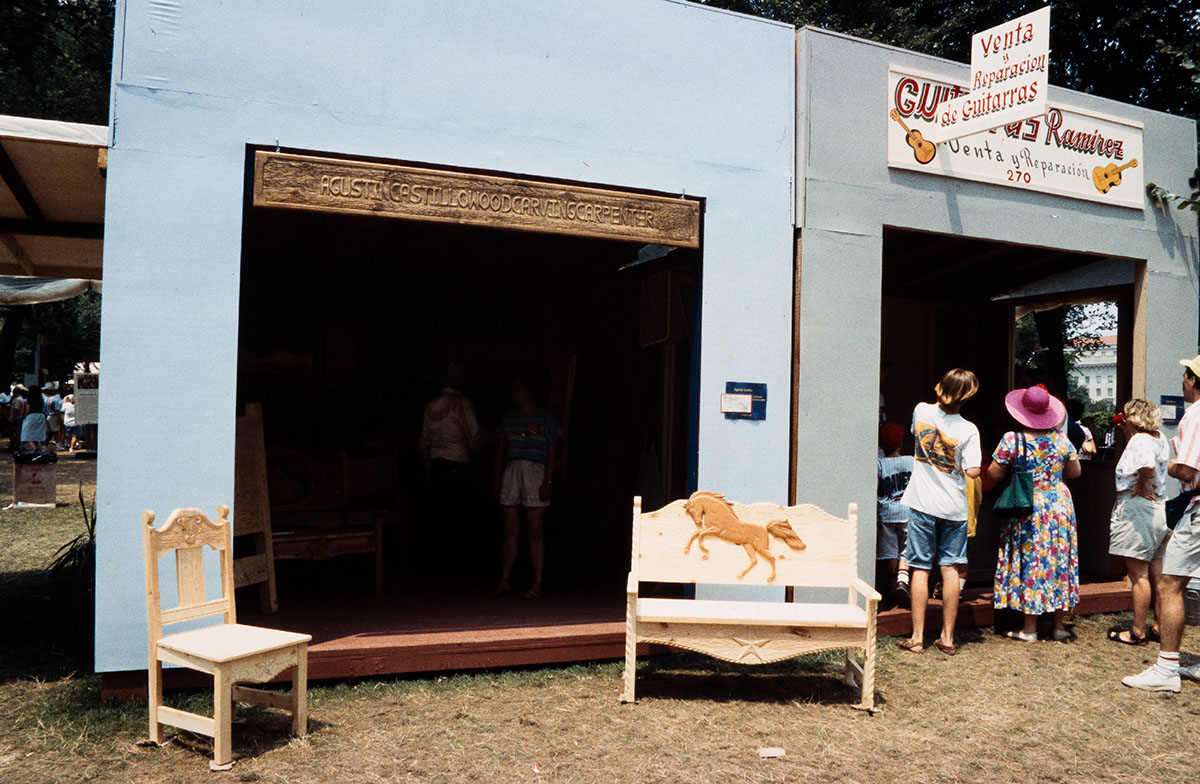 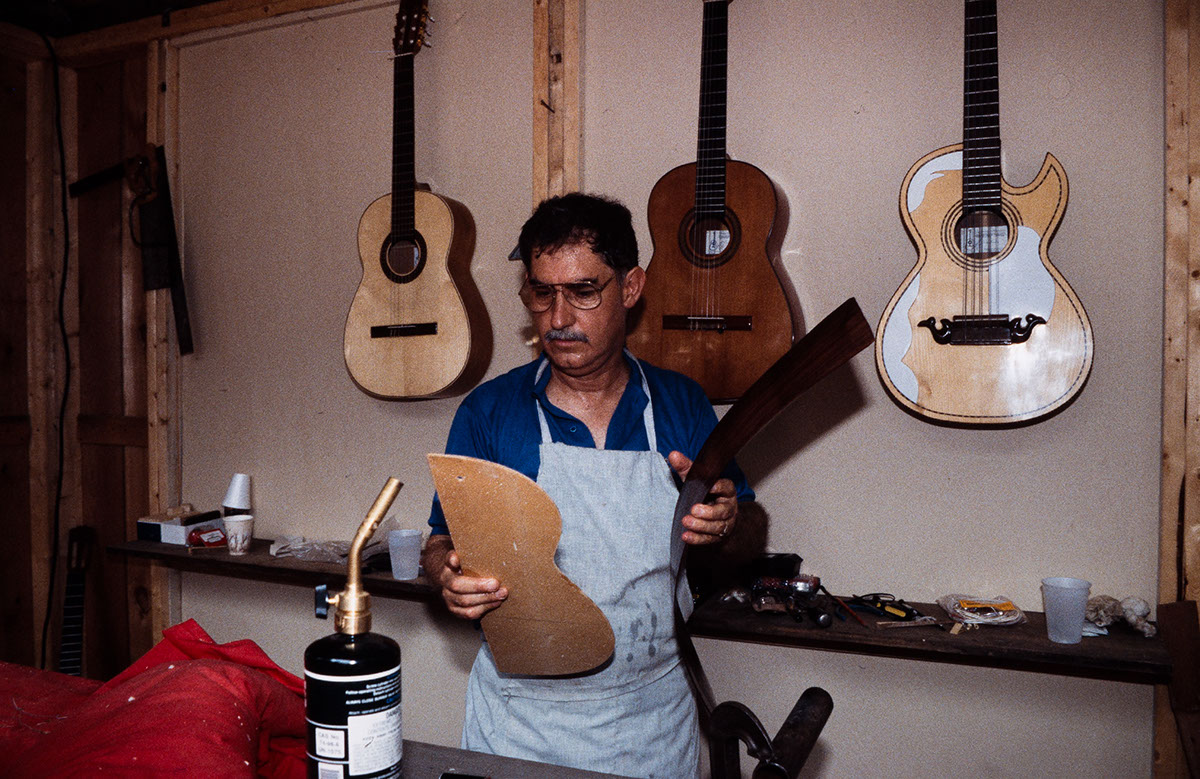 Based on research in the rich and dynamic living culture of the border, the Borderlands Festival program of 1993 was designed to provide a glimpse of the border - its histories, its diverse communities, local and regional identities, and its music, arts, crafts, healing practices, foodways, and narrative. The program was about community-based culture. It presented cultural practices found on the border and cultural expressions about the border, and it explored cultural patterns that were created by the border. It also addressed the cultural heritage, adaptability, and creativity of Native Americans and of the Mexican, Hispanic American, Anglo, and other immigrant communities that have played a part in creating the life that surrounds the Mexico- U.S. border - those who maintain it, those who cross it, those who are left behind, and those who dwell in the border region. The program explored the processes through which such groups create, adapt, and preserve culture to meet the challenges of life on the border. It sought to present and understand community codes of behavior that evolved on the border including confrontation, evasion, violence, and romance, especially as these have been transformed into narrative and other forms of artistic expression.

Music performances at the Festival included emergent forms such as the conjunto, which grew out of the interaction between different cultural communities; older forms, such as the corrido, which has been used to preserve a historical vision in the defense of disputed territory; and adapted forms such as the string band music now incorporated into the traditional repertoire of the Tohono O'odham Native American communities. Also featured in the program were five muralists, whose work reflects the traditions of Mexican cholo and United States Chicano muralism. Murals continue to be touchstones of common historical experiences, archaeologies of sociocultural movements, and powerful statements of identity, ethical principles, and community aspirations. The unique fusion of border aesthetics and handcrafted technology was embodied for Festival visitors in lowriders - distinctively customized automobiles. These lowslung, hopping cars complemented the iconography of murals as statements of cultural identity.

Vaqueros of south Texas demonstrated their skills, crafts, and foodways associated with their cowboy tradition, which dates back to the Spanish colonial era. A fisherman from the port of Brownsville demonstrated shrimping techniques. A Laredo blacksmith forged stirrups, belt buckles, and other implements of vaquero life, along with a number of traditional and contemporary decorative objects. A ropemaker demonstrated the use of the local fiber called lechuguilla (a fibrous plant of the agave family). While fine craft traditions like guitar- and furniture-making are not specific to the border, craftspeople have incorporated motifs and instruments native to the region, like the bajo sexto guitar. Other occupational groups characteristic of the border environment included federal Immigration and Naturalization Service (INS) agents who regulate movement across the border; coyotes and polleros, who help migrants evade immigration regulations; and workers in maquiladora assembly line industried. Narrative sessions focused on the culture of craft and occupation in the context of the border.

Artisans also demonstrated crafts used in the home and for special celebrations, including quilt-making, flower- and piñata-making, candlemaking, and reverse-painted glass. Participants prepared regional specialties, traditional foods served for fiestas, and offered a sampling of typical vaquero outdoor cooking. Finally, the Festival presented members of the Mixteco Indian community in Tijuana, a recent migrant group, which preserves its cultural identity and contributes to the economy at the border by maintaining ties with other Mixteco communities in Oaxaca and California.

The United States-Mexico border has had a profound effect on the lives of millions of people. The thenpending NAFTA free trade agreement was only the latest in a long line of international socioeconomic arrangements with wide ranging local impacts. Critical attention in Mexico and the U.S. had increasingly focused on the historical consciousness created in this borderland and on its expression in traditional and other forms of art. Recognition of the vitality and value of borderland culture was growing in 1993 at the margins, among borderland populations, as well as in the centers of power and opinion in both countries. Scholars and political leaders increasingly realized that the cultural encounters, syntheses, and resistances characteristic of border life signaled similar cultural developments in the larger societies. This intensifying concern and scrutiny centered on the margin, but could it reduce the marginality in human rights, social dignity, and economic opportunity at the border? Festival organizers hoped that listening to community voices of the border from the Mexican and United States sides could better inform our thinking and decision-making.

Borderlands have often been the locale of major folk cultural achievements, from the outlaw ballads of the Scots-English border to the heroic corridos of south

Living on the Border: A Wound That Will Not Heal

Living in the geographical area where the U.S. and Mexico meet, the truth is always present. It gnaws at one's consciousness like a fear of rabid dogs and ...

The indigenous communities of the Mexico-United States border region succumbed to violence, tuberculosis, venereal diseases, and the catechism. From the era of

The Problem of Identity in a Changing Culture: Popular Expressions

Conflict—cultural, economic, and physical—has been a way of life along the border between Mexico and the United States, and it is in the so-called Nueces-Rio ...

The Arizona-Sonora border was established as a result of the Gadsden Purchase of 1853. It runs through desert and mountain country, from the western Chihuahuan

The Epic Tradition of the Founding of Nuevo Laredo

In Nuevo Laredo there is an historical tradition that is central to public expressions of civic identity at the border. It is the story of how, in 1848, when ...

The border maquiladora industry, the most conspicuous form of foreign investment in all of Mexico, was established in 1965 to absorb the labor freed up at the ...

The Mixteco Presence in Tijuana

Since 1960, many Mixtecos have migrated more than 3,000 kilometers (2,000 miles) from their home villages in the state of Oaxaca to Tijuana, settling there and

Mixteco Women on the Migration Route

The Mixteca region of Oaxaca still maintains the humble beauty of many of Mexico's indigenous regions—and also their poverty, erosion, uncultivated parcels of ...

One of the most enduring musical traditions among Mexicans and Mexican Americans is the accordion-based ensemble known as conjunto (and as musica nortena ...

The term "lowriders" refers to automobiles that have been lowered to within a few inches of the road in the expressive style of la onda bajita, "the low wave,"

From the yard around my hacienda in El Nacimiento de los Negros I can look down across the valley to some other homesteads and see men tending their goats and ...

The Chinese in Baja California

The Chinese played an important role in the 19th century development of the California and Baja California coast and border region. They created the first ...