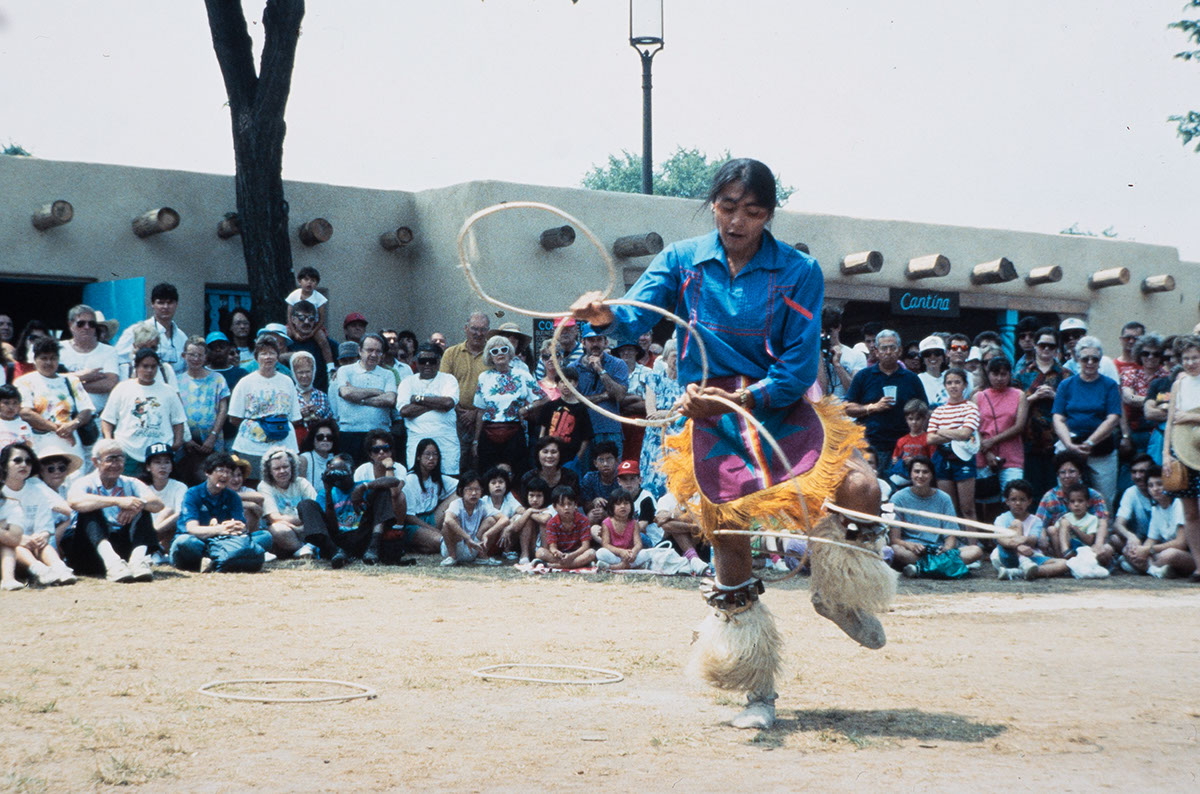 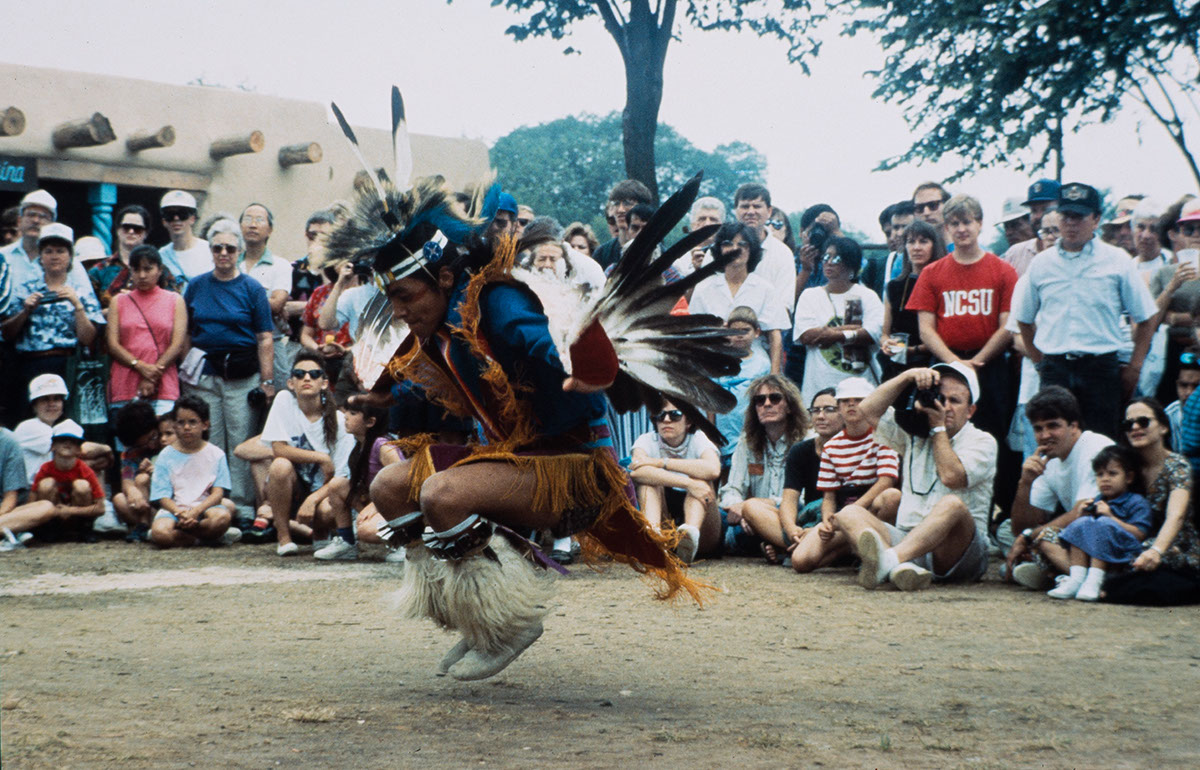 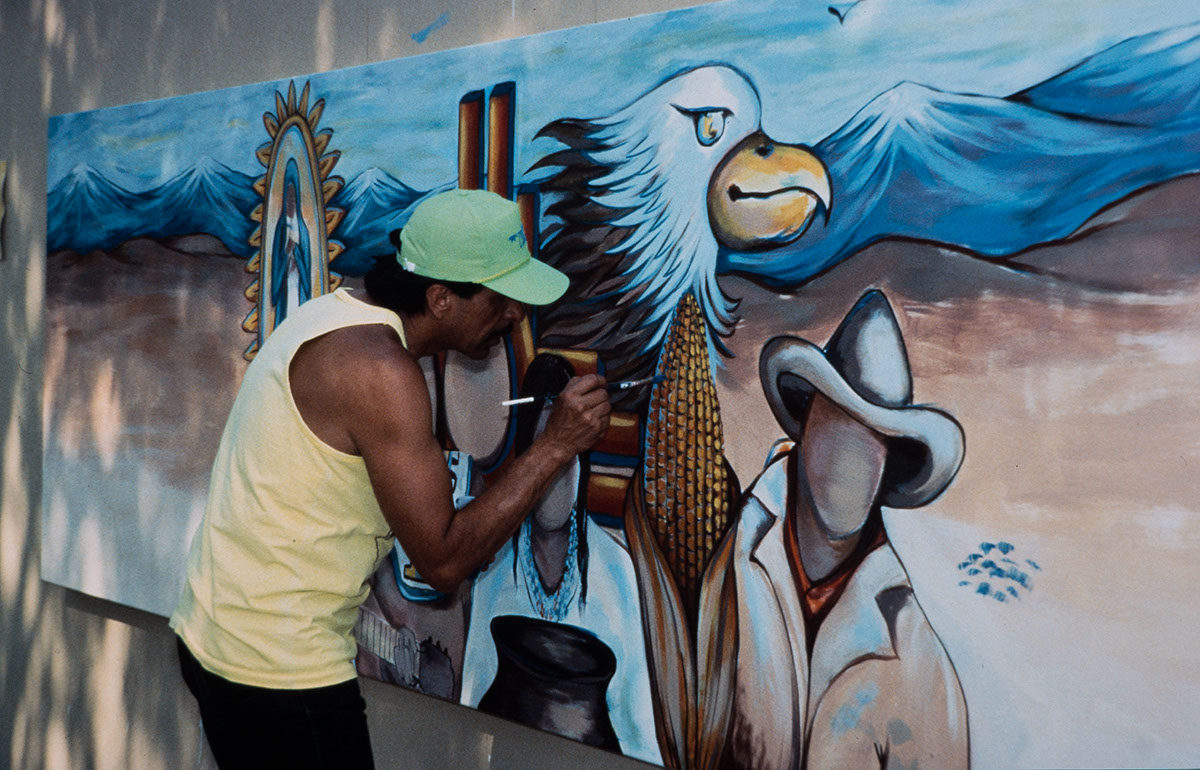 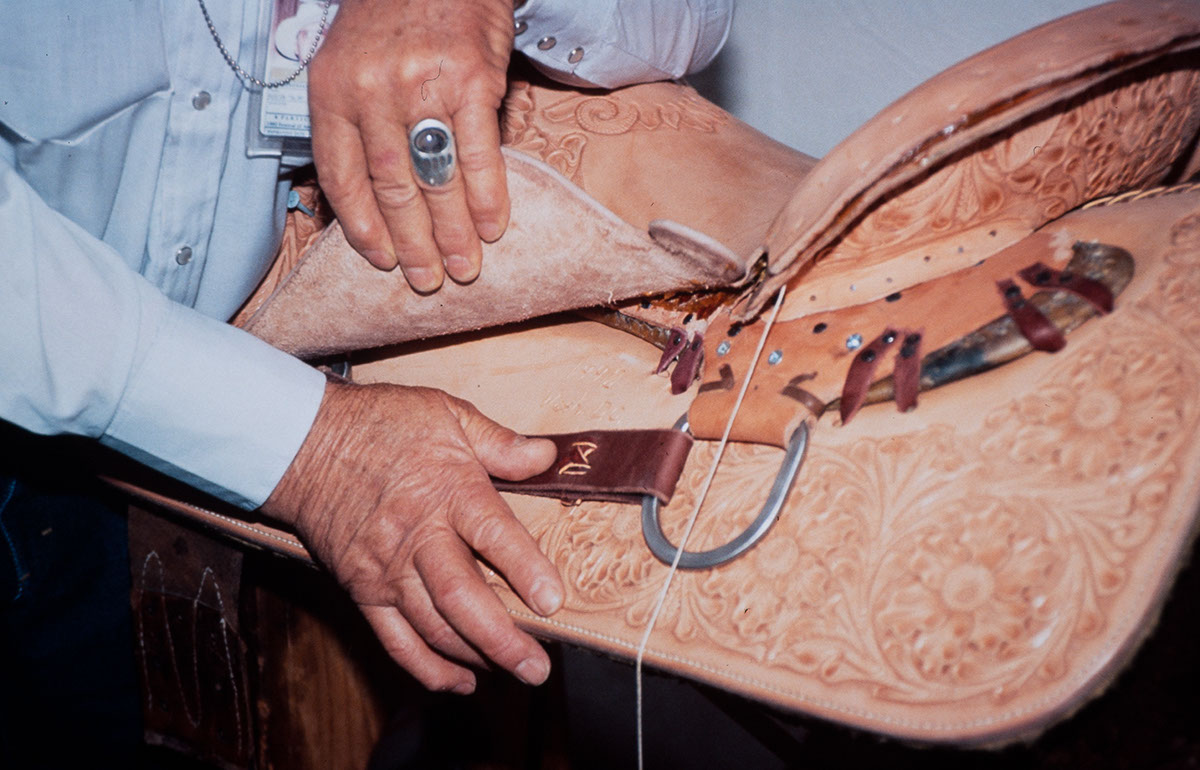 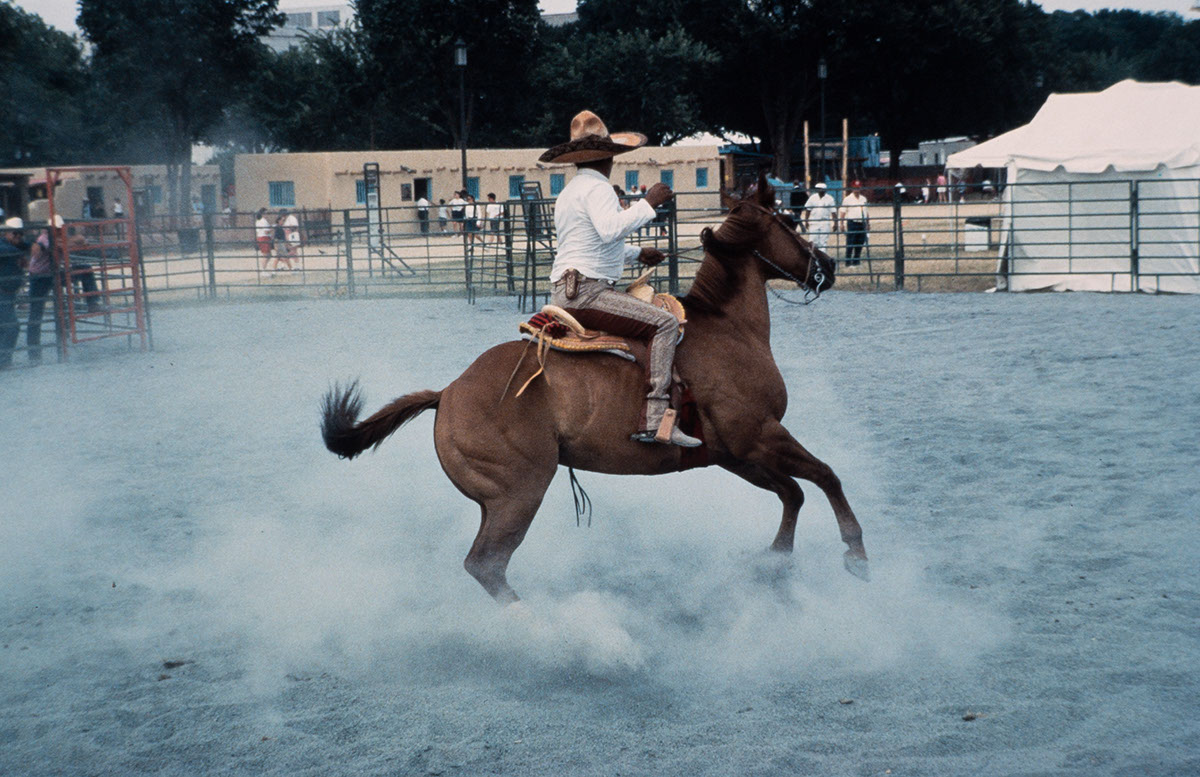 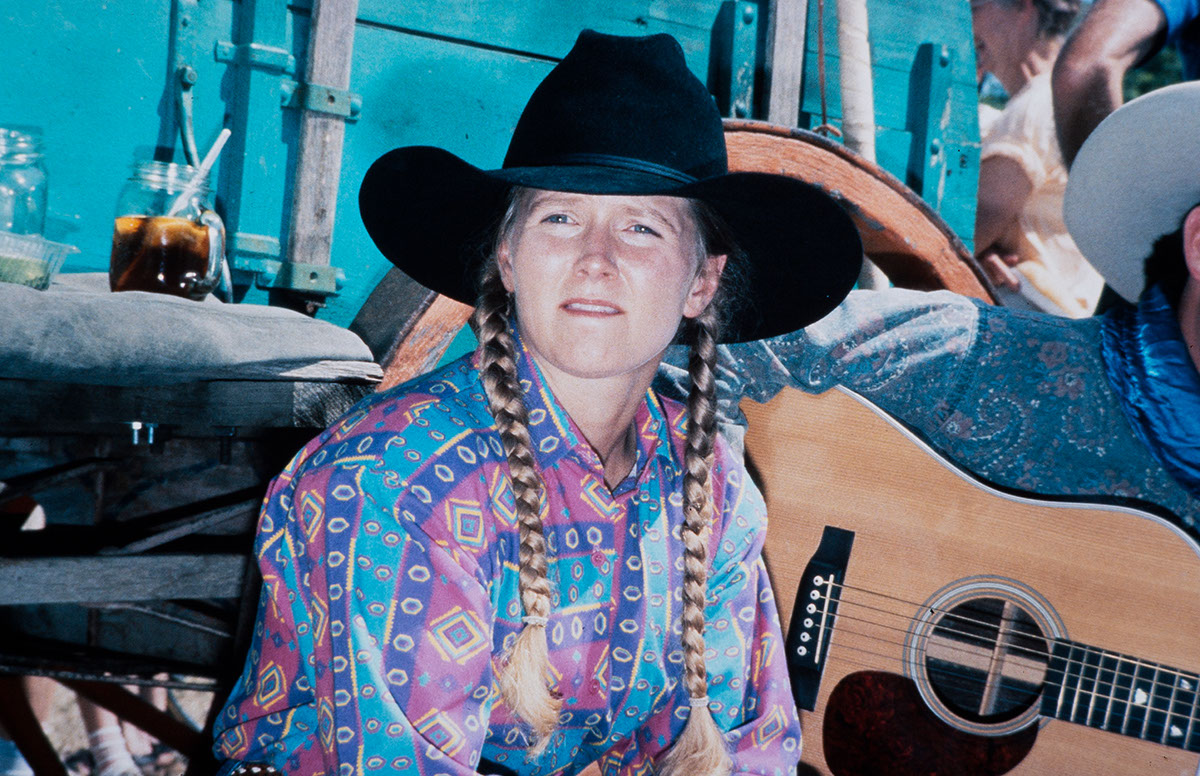 Before the people there was the land. High mountains in northern New Mexico fork southward, forming arms. One curls westward to embrace the high mesa and plateau land, while the other thrusts directly south to separate the dry grasslands of the east from the fertile valley carved by the Rio Grande. Stories tell that the First People found this land when they emerged onto its surface, born from the womb of Mother Earth.

The Spanish and later the Mexicans also found this land, as they wound their way north on horseback or in carretas, following the course of the long, wild river, and establishing a permanent connection - the Camino Real - between northern New Mexico and Mexico. Then, from Texas, California, Oklahoma, came still others, determined to transform the land and tame the river. And today people still come, on family odysseys that began in Italy, Lebanon, Iran, Czechoslovakia, India, Poland, Japan, or Germany. In one short stretch, the Rio Grande recounts this history as it passes near old communities like San Juan Pueblo and Embudo, then the new atomic city, Los Alamos, and then Albuquerque, a city of a half-million people.

Five hundred years after Columbus, the complex engagement between Europe and America, which his voyage has come to symbolize, continued to produce patterns of accommodation and resistance that were presented in the 1992 Festival program. Conflicting uses and meanings for the same land seem inevitable in New Mexico, where more than 70% of the land is managed by the state or federal government, and where a significant percentage of local income is derived from tourism. Cultural traditions of New Mexico's diverse communities were not seen, at the Festival, as immutable heirlooms passed down from one generation to the next. Rather, visitors could see how today's New Mexicans shape traditions by the conflicted choices they make today, weaving a design that can never be wholly foreseen.

José Griego and Andrew Wiget were Curators, with Philippa Jackson as Research & Program Coordinator and Francesca McLean as Program Assistant.

The New Mexico program was made possible with the support of the State of New Mexico, Bruce King, Governor; with the collaboration of the Department of Tourism, the Office of Cultural Affairs, the New Mexico Arts Division, and the Museum of International Folk Art; and with the assistance of the Tourism Association of New Mexico.

The Great Loom: Weaving the Cultural Landscape of New Mexico

Before the people there was the land. High mountains in northern New Mexico fork southward, forming arms. One curls westward to embrace the high mesa and ...

The Virgin of Guadalupe

The history of the Czech and eastern European community of Deming began in the 1920s with the arrival of many immigrants from south Texas, who were for the most

In the 1840s Henry Boyer, a Free Negro from Pullman, Georgia, traveled to the Southwest while serving as a wagon driver in the Mexican American War. He returned

A Hopi potter, Al Qoyawayma aptly expressed Pueblo reverence for the land when he said about earth and clay, "I know that some of the clay may even contain the

The Sephardic Legacy in New Mexico: The Story of the Crypto-Jews

After 500 years of secrecy, groups of Hispanic crypto-Jews, or hidden Jews, are now beginning to emerge from the shadows in New Mexico and other parts of the ...

The Indo-Hispano Legacy of New Mexico

Struggle is as prominent a feature of the New Mexican landscape as its mountains and deserts. For centuries the successive inhabitants of the upper Rio Grande ...

Spanish culture came to northern New Mexico with a musical heritage whose wellsprings lie in European antiquity. Its traditions continued to evolve as ...

Religion in the traditional cultures of New Mexico has played an important nurturing role, as people struggled to survive in a very harsh land over the course ...

The practice of folk medicine by Indian and Hispanic herbalists, medicine men and curanderos is guided by knowledge and religious beliefs exchanged among ...

Our world is in the midst of a housing crisis. Cities abound with the poor whose need for shelter grows. In America, where home ownership is the heart of the ...

On August 11, 1598, the first Spanish-inspired irrigation ditch, or acequia, was dug near present-day San Juan Pueblo in northern New Mexico. The workers were 1

In the New Mexican Hispanic tradition, duendes are ghosts of children who can inhabit mines. They play mischievous pranks, sometimes tossing pebbles around. ...

The Folklore of the Oil Industry

A cycle of stories told in the southeastern New Mexico oilfields since the 1960s features two hippies as its central characters. In one story, one hippie tells

On March 26, 1880, at Galisteo Junction, near Santa Fe, a railroad engineer and two friends reportedly encountered a hot-air balloon shaped like a fish and ...

Preserving culture. A paradoxical concept to be sure; it seems to imply that something as lively and fermentive as culture can be suspended, like the proverbial

My great-grandmother, Mother Corn, born in the 1870s in Santa Clara, raised my mother and taught her pottery-making at an early age. My mother had eight ...

Ganados del Valle/ Tierra Wools is an effort of community people to utilize weaving, sheep raising and other traditional practices to strengthen our community ...

The Santa Fe Railway and Tourism in New Mexico

More than 30 years before New Mexico became a state in 1912, its territorial Bureau of Immigration writers touted the life-giving and healing properties of New

Since the advent of "leisure" as a class activity, New Mexico has been a focus of the itinerant sightseer. "See America First" and the "Southwest Wonder Land" ...

Language reflects the history of a culture and the languages of New Mexico reflect a combination of many people's customs, values and stories. Although English