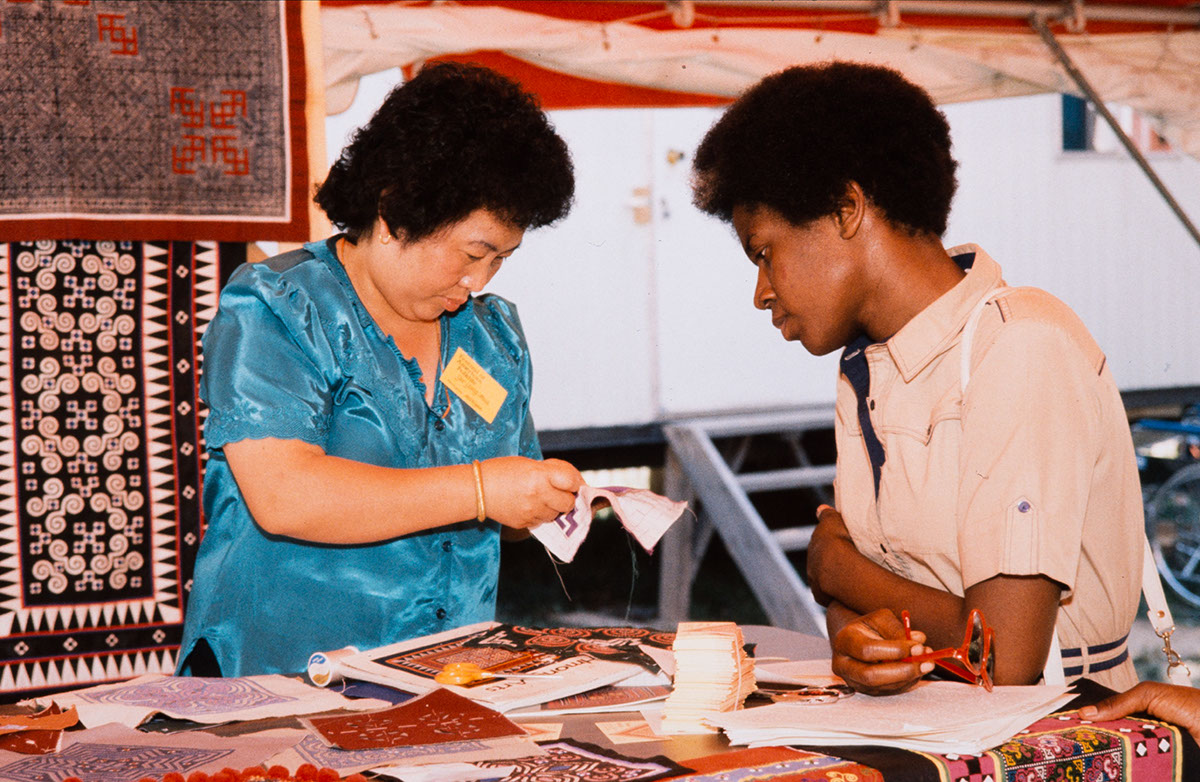 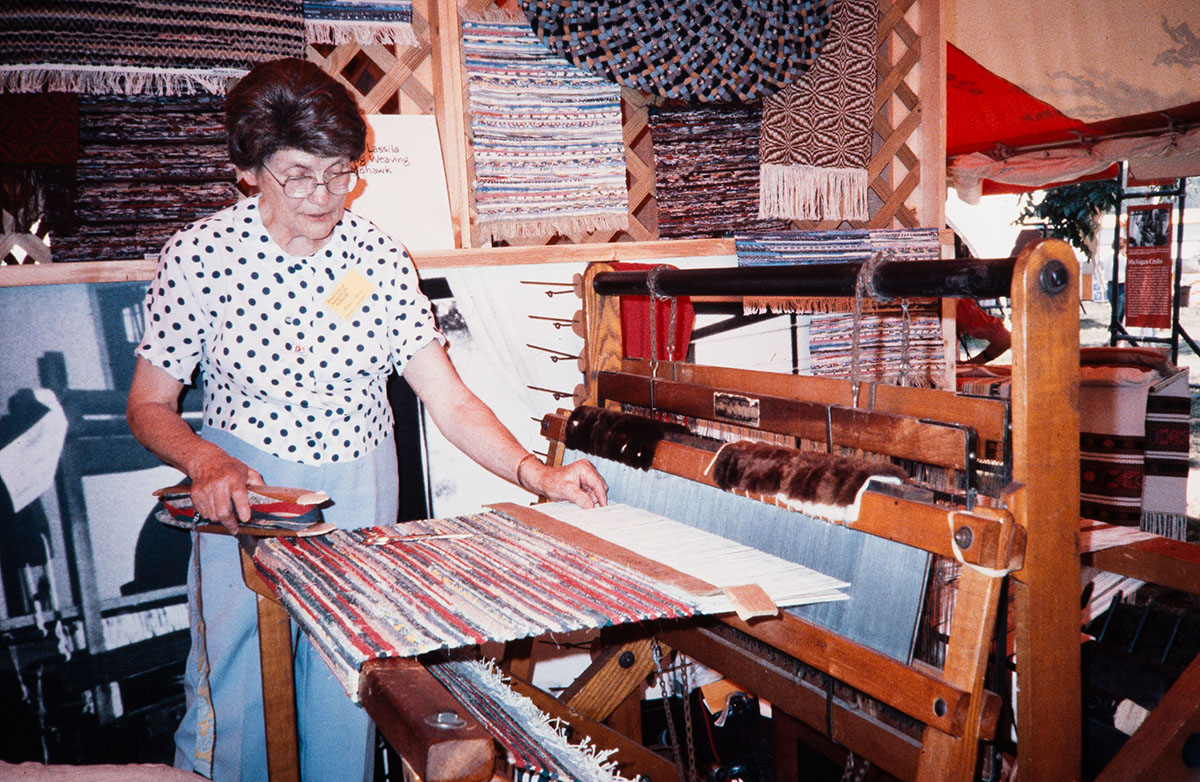 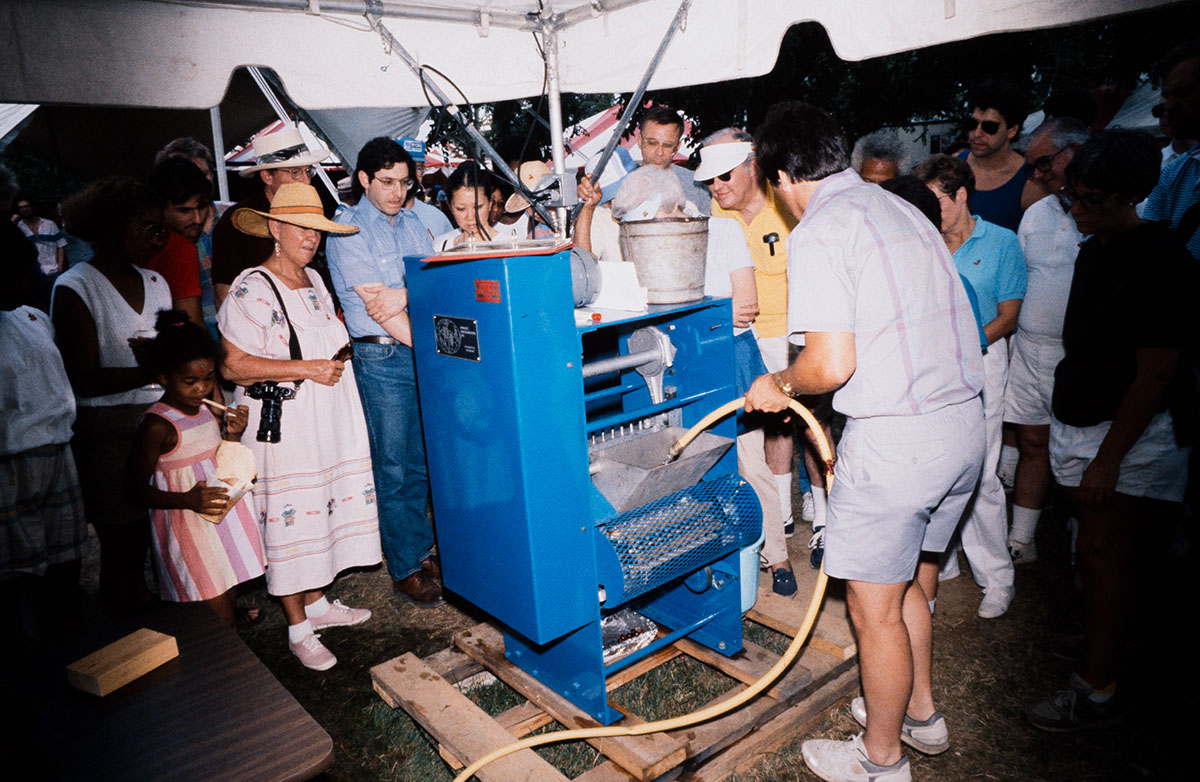 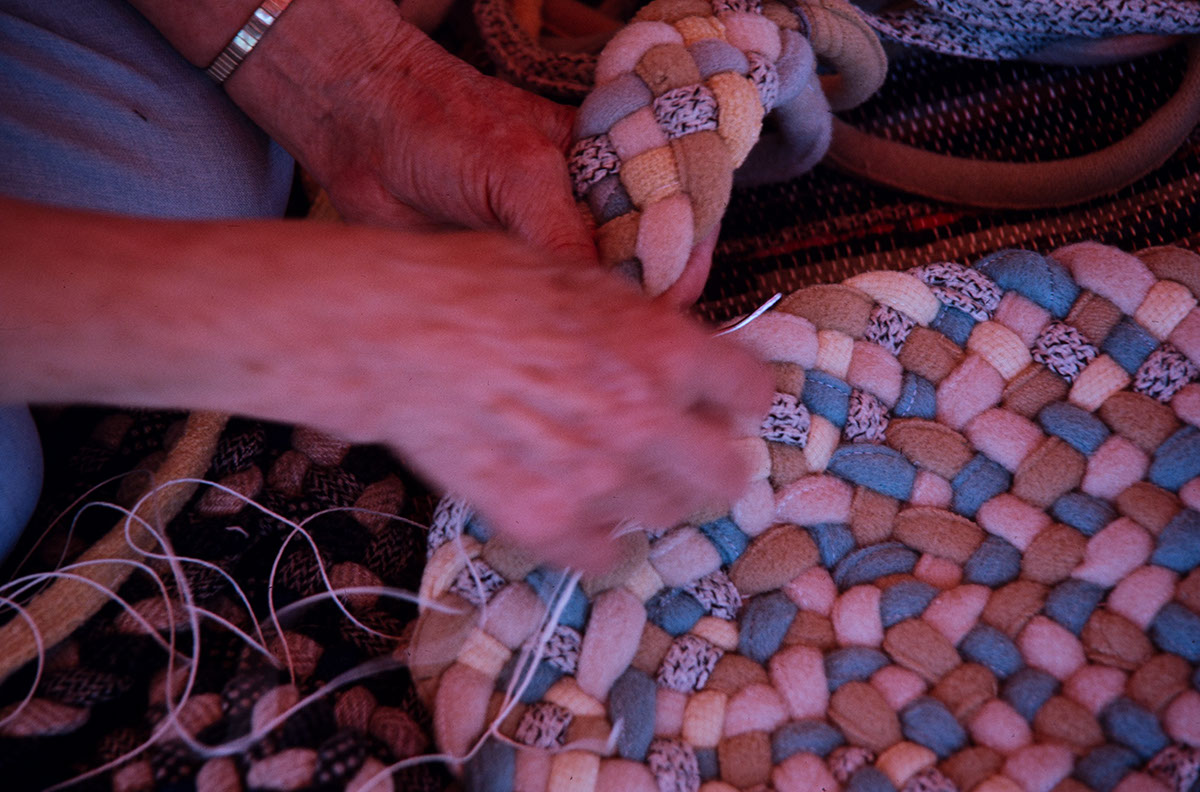 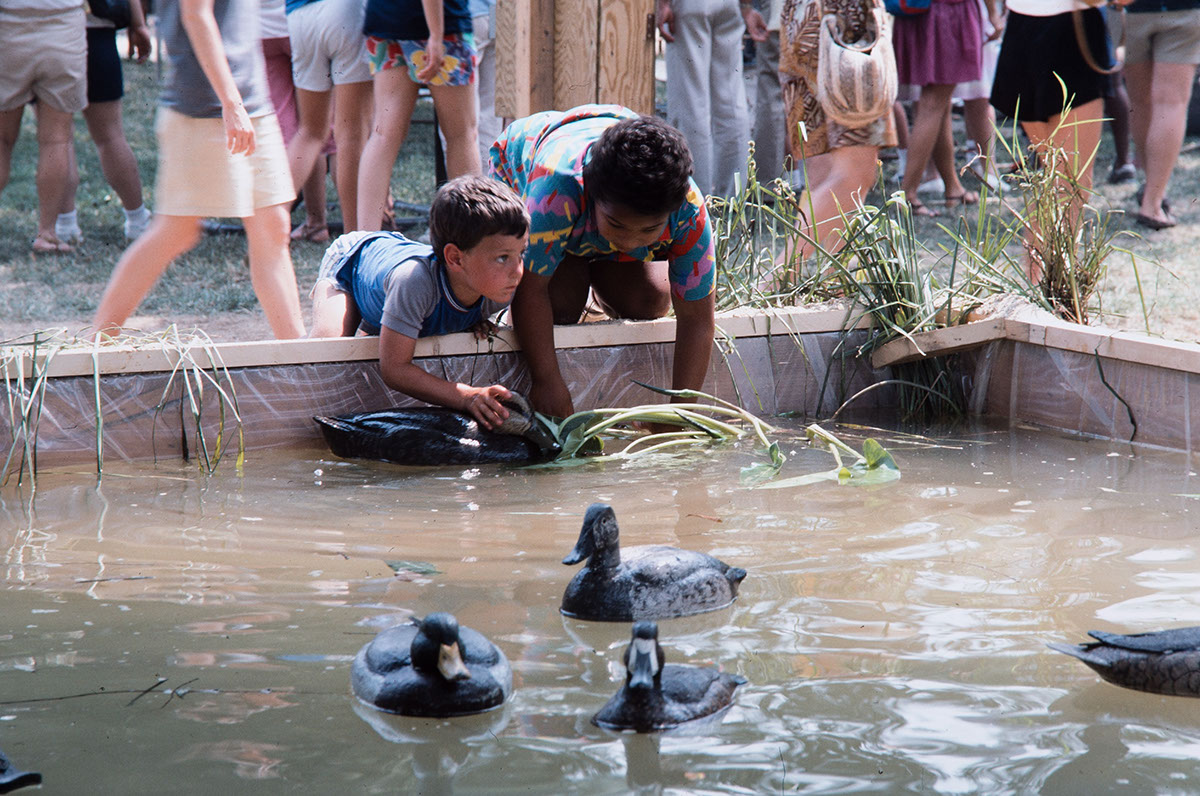 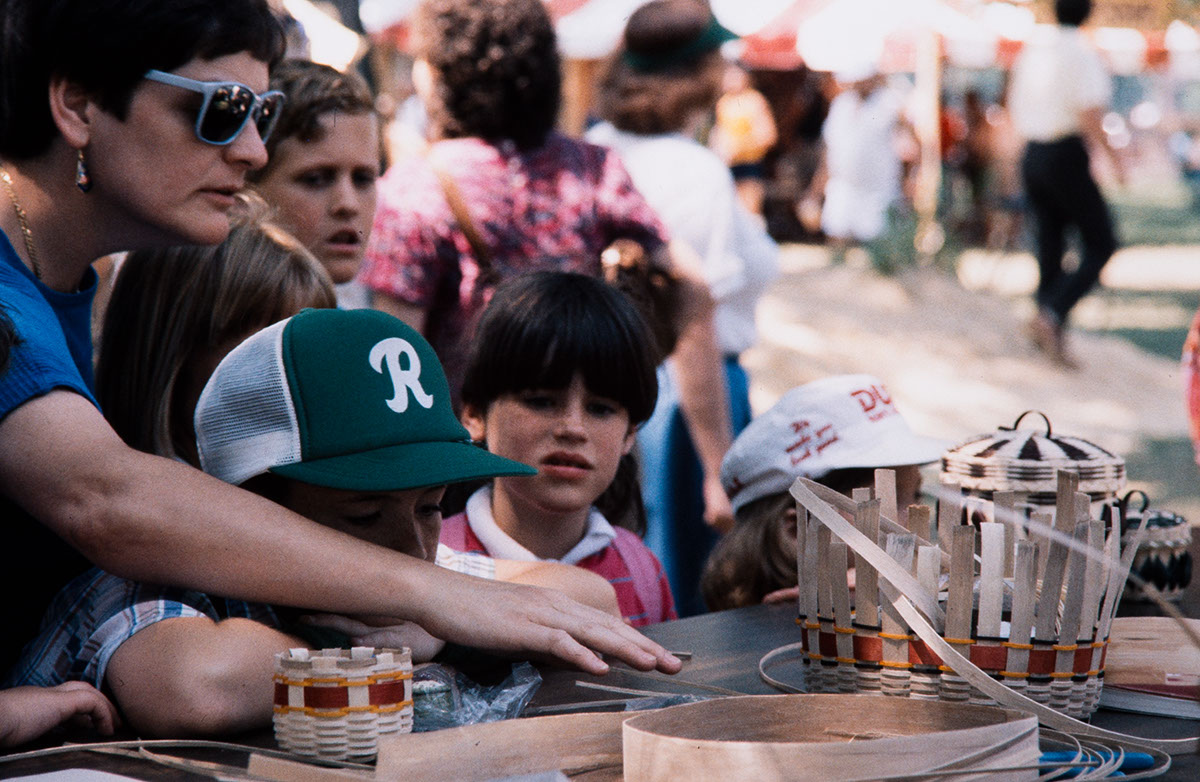 From the State of Michigan, ninety of its residents came to the 1987 Festival to speak about and demonstrate some of the rich traditional culture from that region. To help create a festival setting in which performers of valued traditions could speak about their experiences and heritages with performed music, active demonstrations, and spoken words seemed a most appropriate way to celebrate the sesquicentennial of that geographically endowed, historically important and culturally rich state.

Throughout Michigan's history those who migrated to the state have been drawn by - or have themselves introduced - fishing, trapping, mining, lumbering, farming, and automobile manufacturing. The lore of such occupations, combined with the rich ethnic heritage of those who built Michigan, form the essence of the state's traditional culture. Michigan today is home to more than one hundred different nationalities, including the country's largest population of Finns, Belgians, Maltese, and Chaldeans; the second largest numbers of Dutch, Lebanese, and French Canadians; and perhaps the largest concentration of Muslim Arabs (in southeast Dearborn) outside the Middle East. Detroit alone is one of the most ethnically diverse cities in the country. The heritage of these diverse groups - along with those of Native, Euro Americans, and Afro Americans who migrated to Michigan throughout the state's history - give Michigan folklife its distinctive characteristics.

Migration to Michigan: An Introduction to the State's Folklife

Throughout Michigan's history those who migrated to the state have been drawn by—or themselves have introduced—fishing, trapping, mining, lumbering, farming, and

Folklore of the Upper Peninsula

When the state adopted "Say yes to Michigan" as a boosteristic slogan, residents of the Upper Peninsula (the U.P.) quickly countered with "Say yah to da U.P., ...

Working on the Line

The American public has been sold a new vision of work and working in the last few years. We have been told that America is a nation moving away from its ...

Fishing for a Living on the Great Lakes

Commercial fishing on the Great Lakes, as with most work today along or on the water, has become a much less pervasive, visible activity than it once was. Fewer

Life in Michigan has been shaped not only by its Great Lakes but also by its small lakes, rivers, and streams. Across the northern part of the Lower Peninsula ...

Life in the Michigan Northwoods

Above a line that follows US 10 from Ludington's harbor on Lake Michigan through Clare, the self-proclaimed "Gateway to the North," to Lake Huron's Saginaw Bay,

Muskrat: nearly 300 years of French presence in southeastern Michigan has boiled down to an enduring passion for eating this little rodent. From Port Huron in ...

Crafts of Survival: The Materials of Ottawa, Ojibway, and ...

Michigan's Ottawa, Ojibway, and Potawatomi Indians relied directly upon the forests and waters of their Great Lakes home for food, shelter, and clothing. Life ...

Since the early 1930s Detroit has been one of the prime centers for Black gospel music. Even though gospel was overshadowed in the 1960s by the pervasiveness of