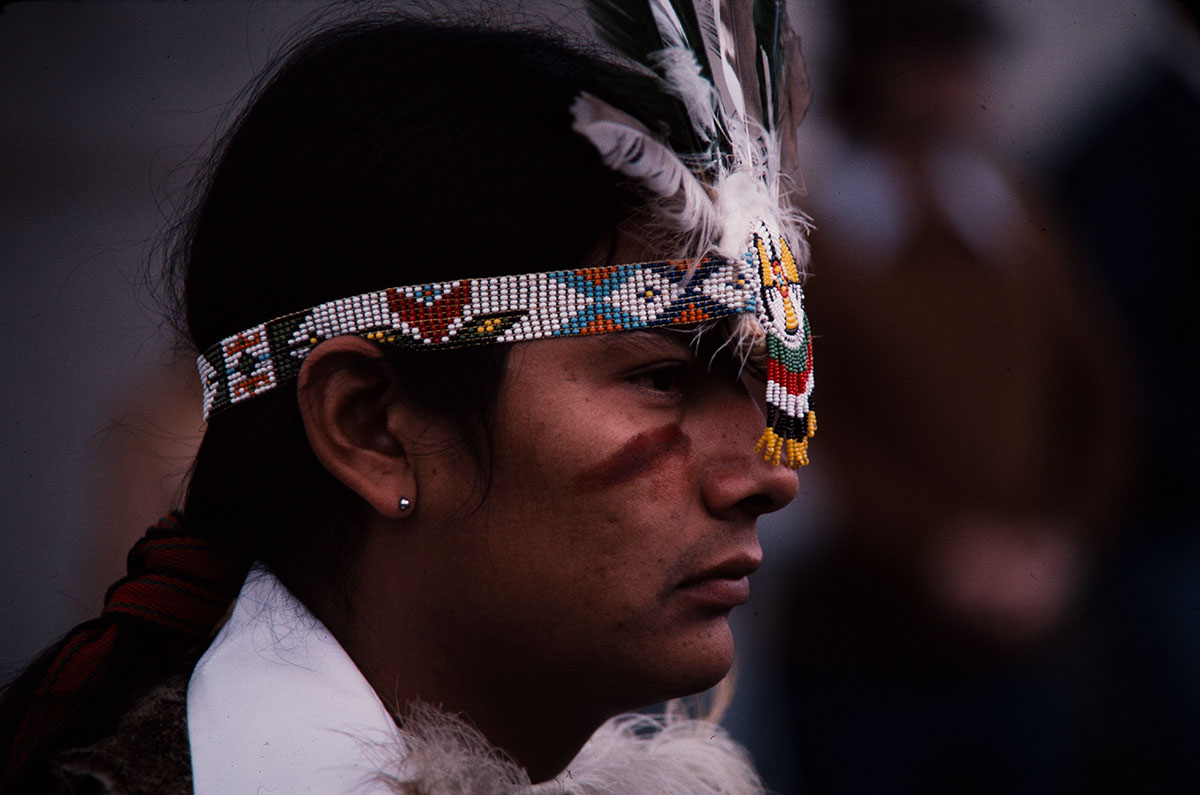 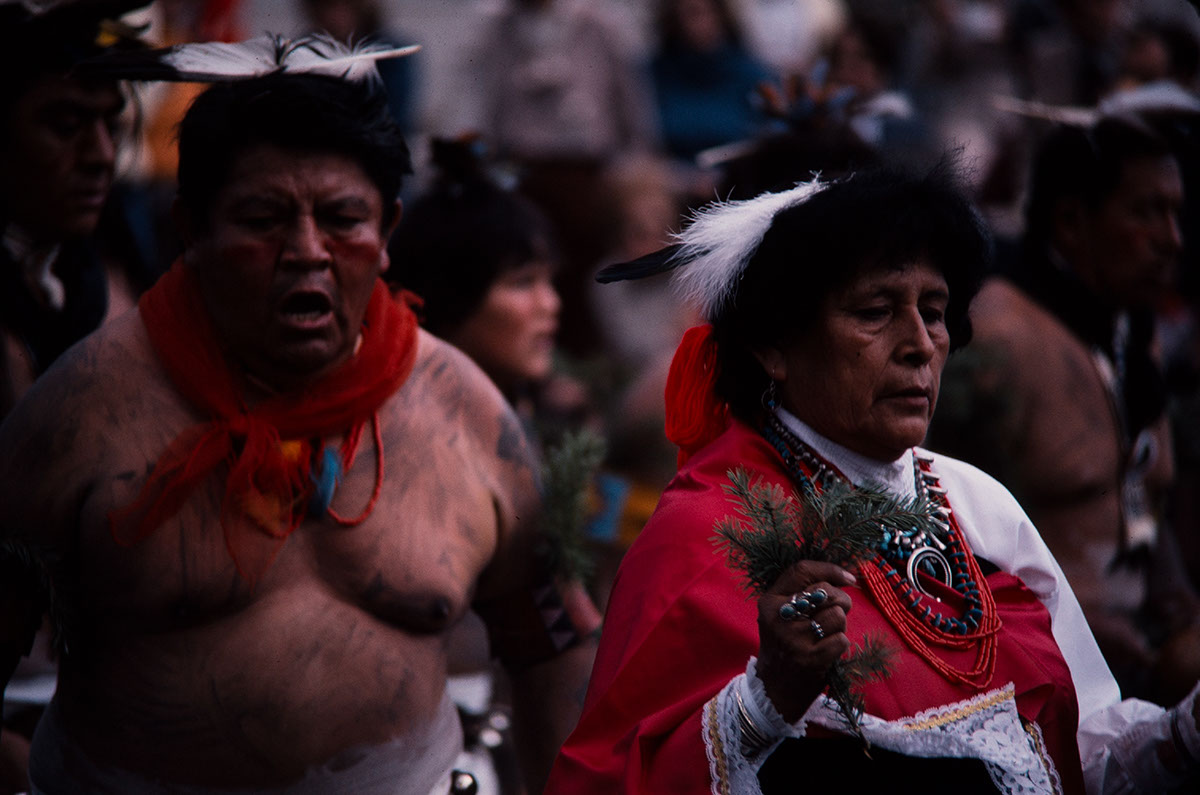 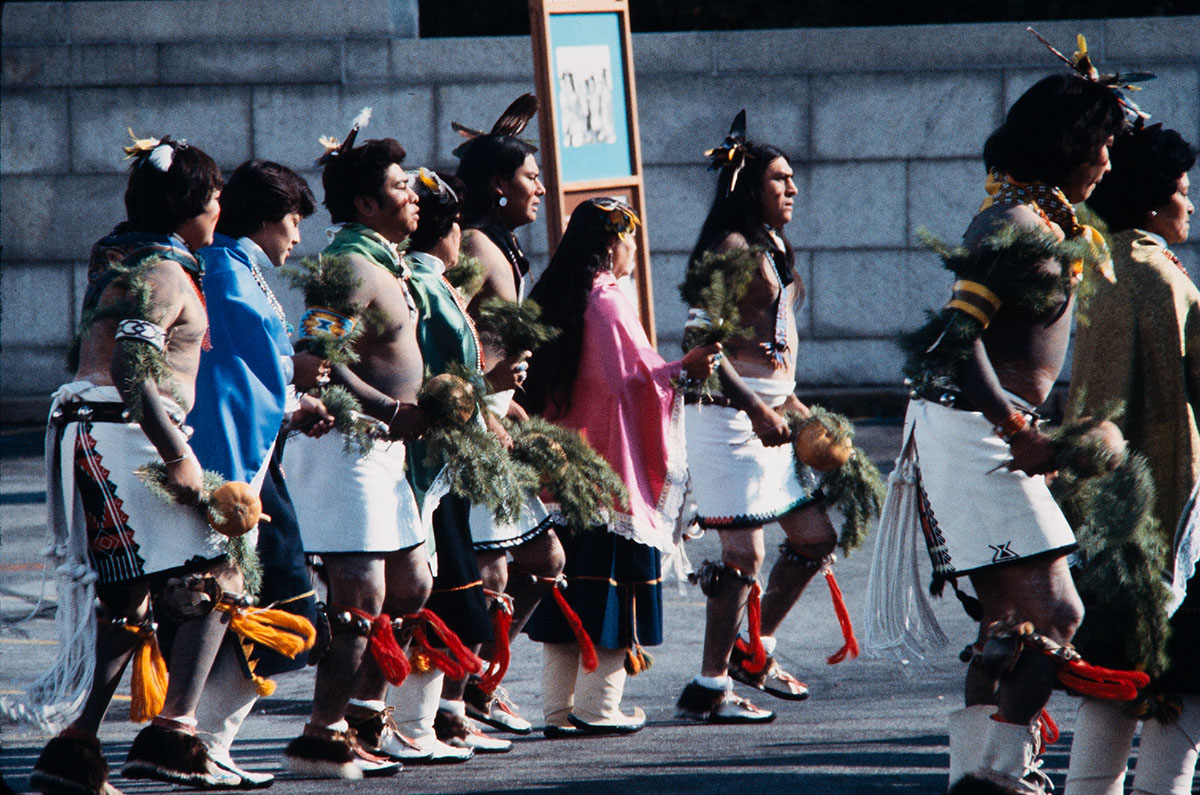 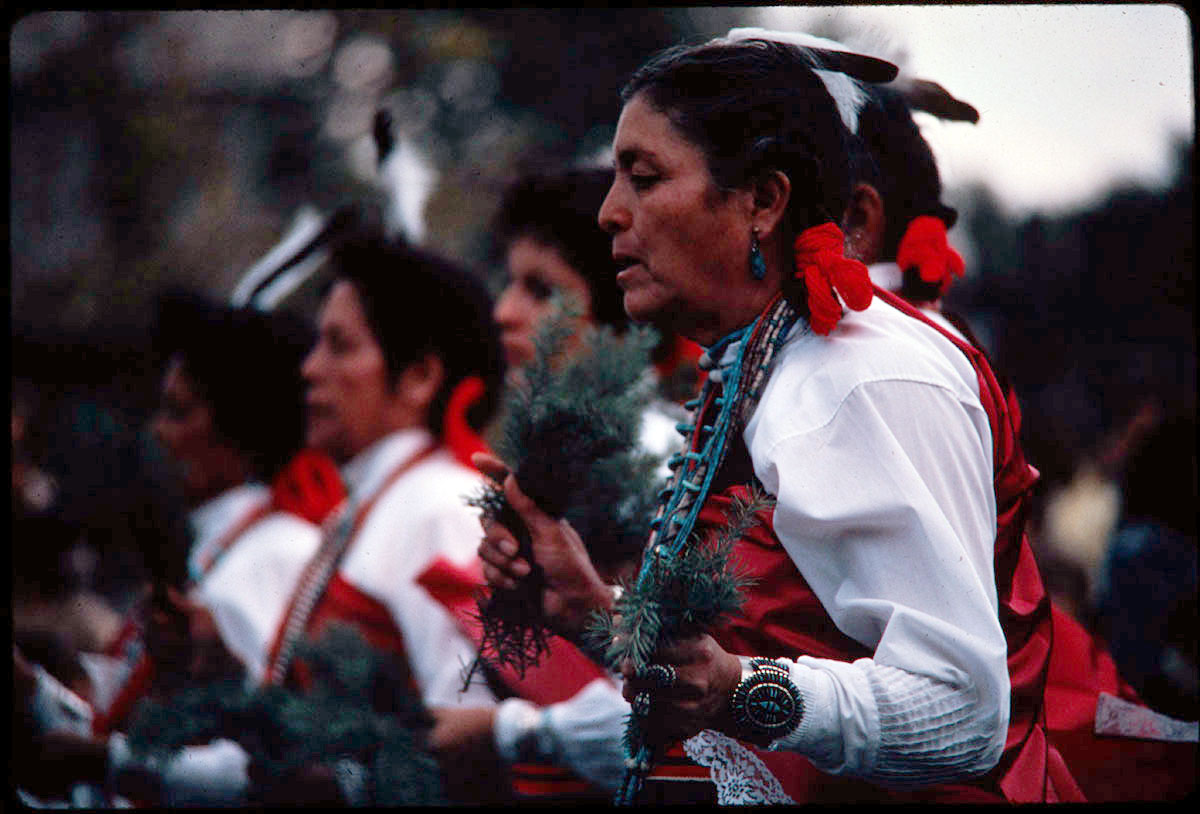 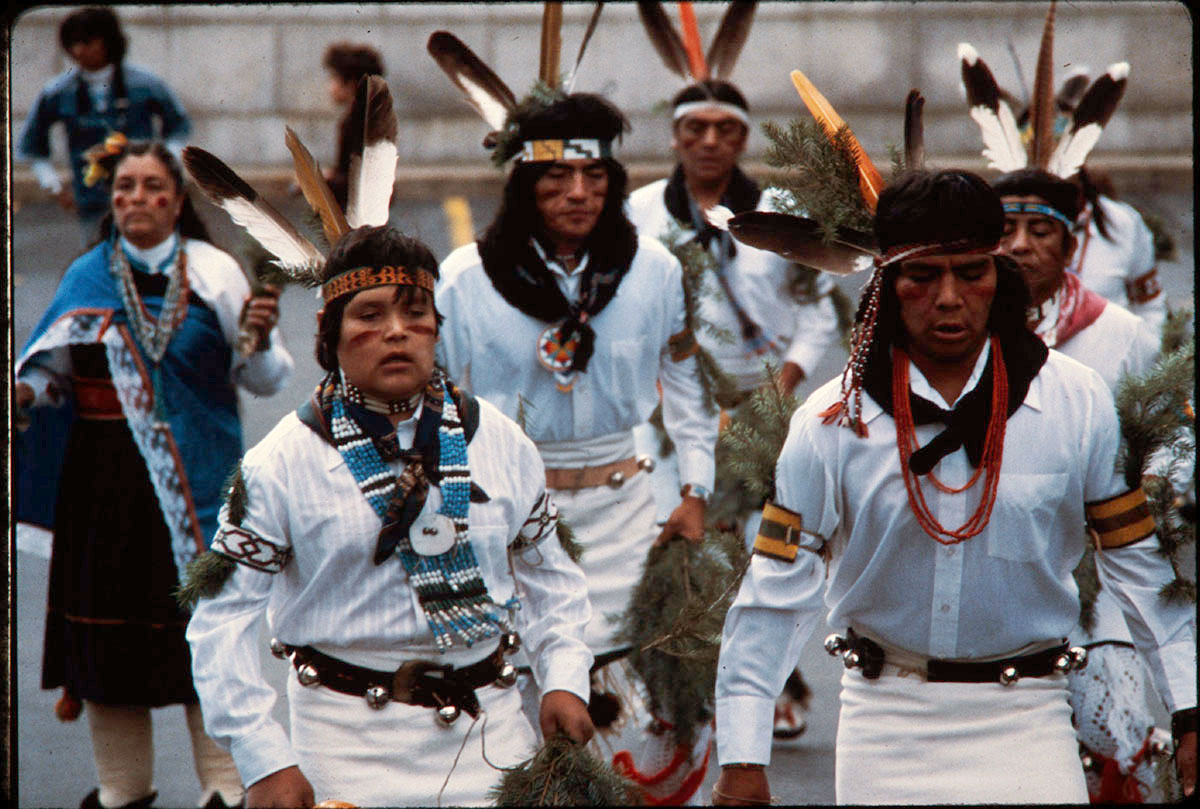 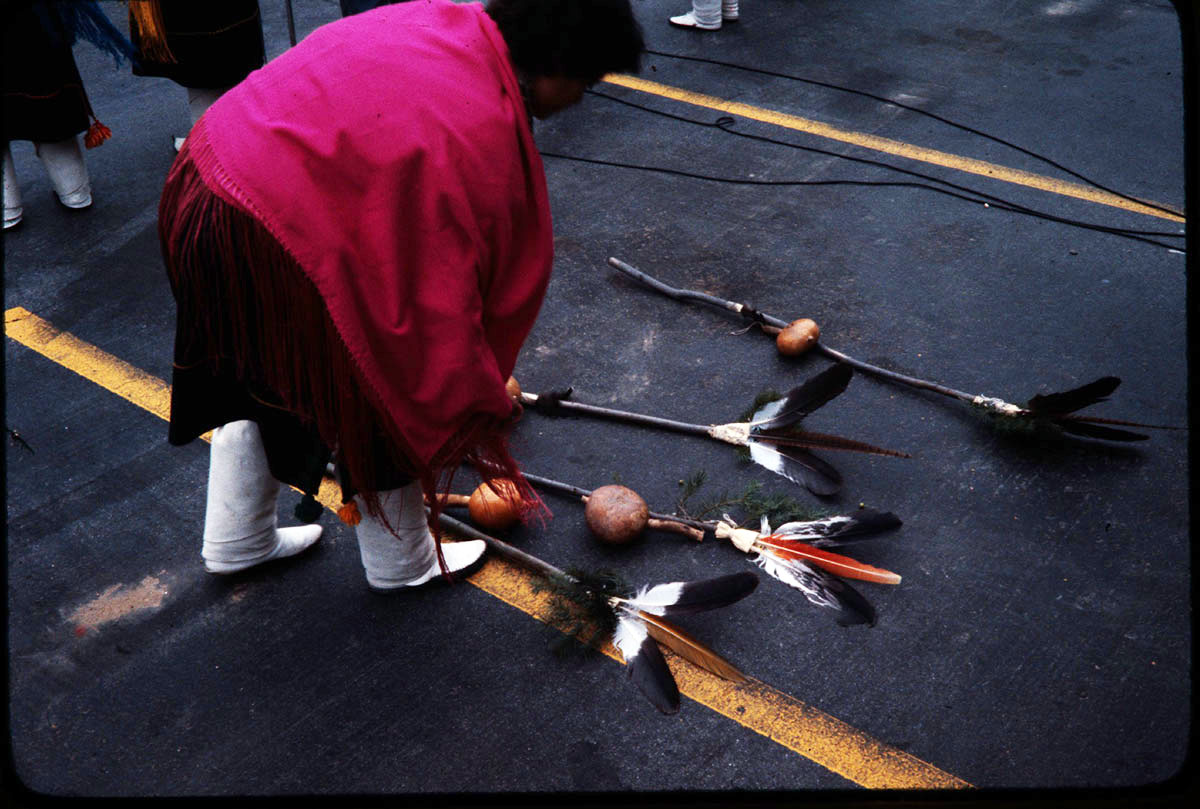 San Juan Pueblo, located on a high semiarid plateau, is the largest and northernmost of six Tewaspeaking villages in the upper Rio Grande Valley just north of Santa Fe, New Mexico. The population during the early 1920s was about 500, but in 1978 boasted well over 1700. Ceremonies, whether from the native ceremonial calendar or from the adopted Spanish-Catholic system, involve the entire population and therefore offered a natural focus for the Festival's consideration of "community". Unlike other Pueblo villages where rituals and dances are presented by smaller community groups, the preparation and performance of ceremonies in San Juan are sponsored by the whole community. Thus, both Summer and Winter people - the two great moieties that organize Pueblo life - participate in all ceremonial dances.

From the native ceremonial calendar, certain dances involve a unique communal activity. Some songs performed during the winter season require new music as well as new song texts each year. Weeks before their performance, the community's corps of composers will gather together to create new songs for the Turtle Dance, Basket and/or Cloud Dance. These men as a group contribute to each other's songs to insure that the proper words and melodies are appropriate for the ceremony. Communal composing in San Juan is age-old, and may be a custom unique to the Pueblo culture of the Southwest.

From the Spanish-Catholic calendar comes one of the most important occasions celebrated by San Juan, occurring on June 24 in honor of St. John, the pueblo's namesake. At no other time is the village hummmg with so much activity. Homes are swept, painted, or replastered weeks ahead of time. A few days before the Feast Day, women may be seen baking ovenloads of bread in their bee-hive shaped adobe ovens. The men have already gathered and chopped cords of cotton and juniper wood to fire the ovens as well as the still much-used wood stoves. As families begin to prepare their extensive menus, some members may be at the kiva, or religious sanctuary, attending dance rehearsals for performances during this important celebration. On June 24 families welcome their relatives and neighbors and also open their homes to the many visitors and friends who have come for the Feast of St. John.

Some of these special festival foods and dances were presented at the 1978 Festival by participants from the San Juan Pueblo, and audiences were able to enjoy firsthand some of the traditional customs that play such an important part in the life of this community.

Seven Centuries of Tradition: the Pueblo of San Juan

In 1598, Don Juan de Onate and his expedition arrived at the junction of the Chama and the Rio Grande Rivers in what is now central New Mexico. There he found ...