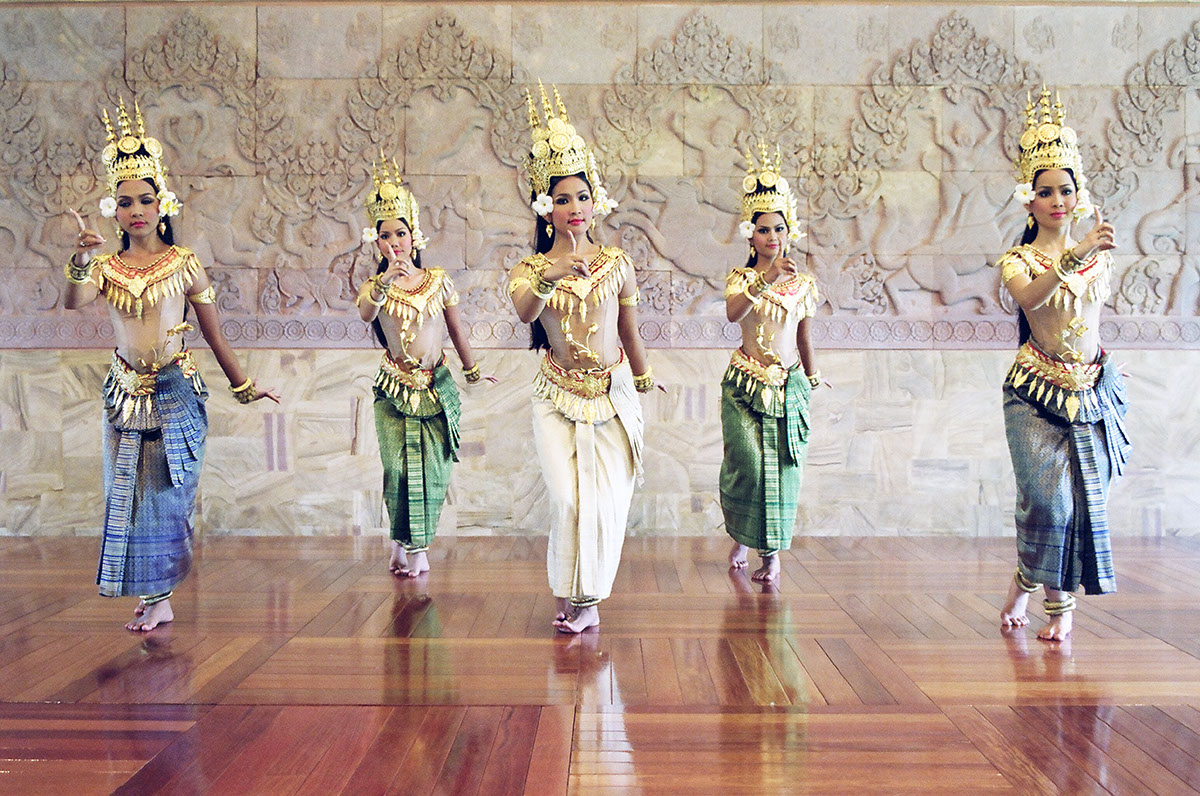 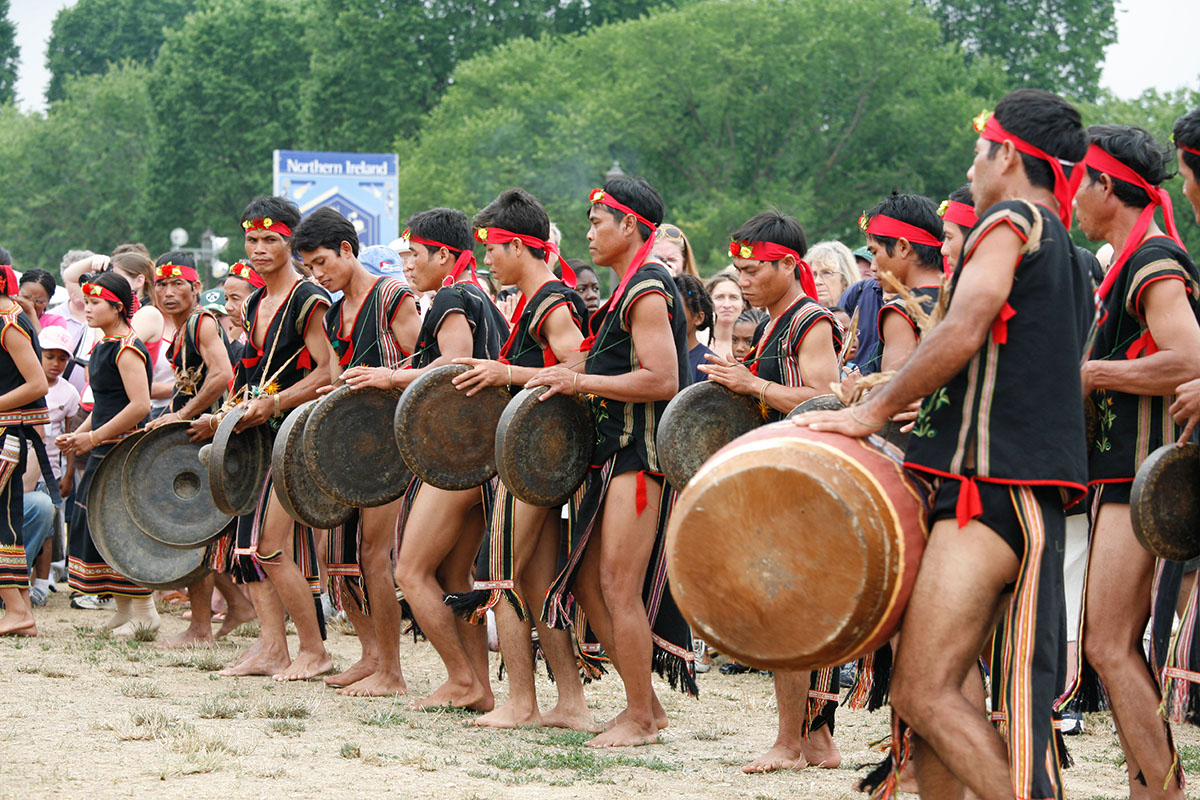 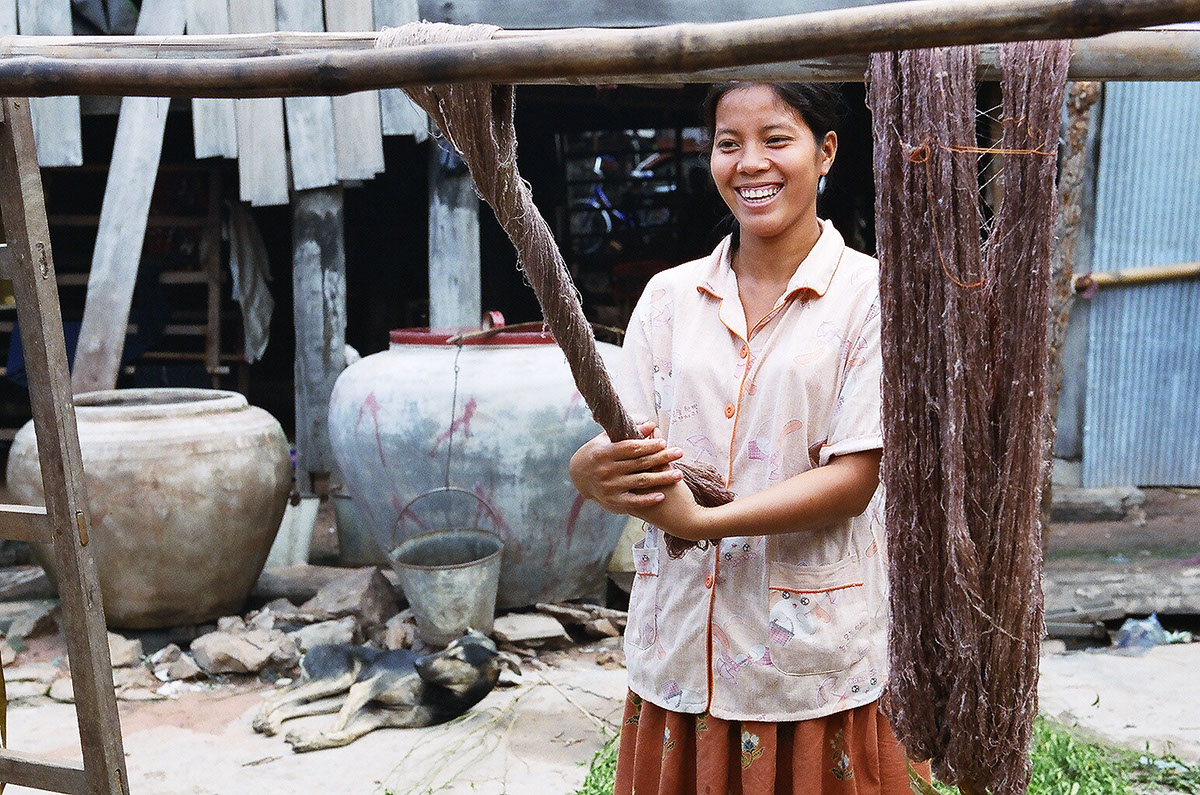 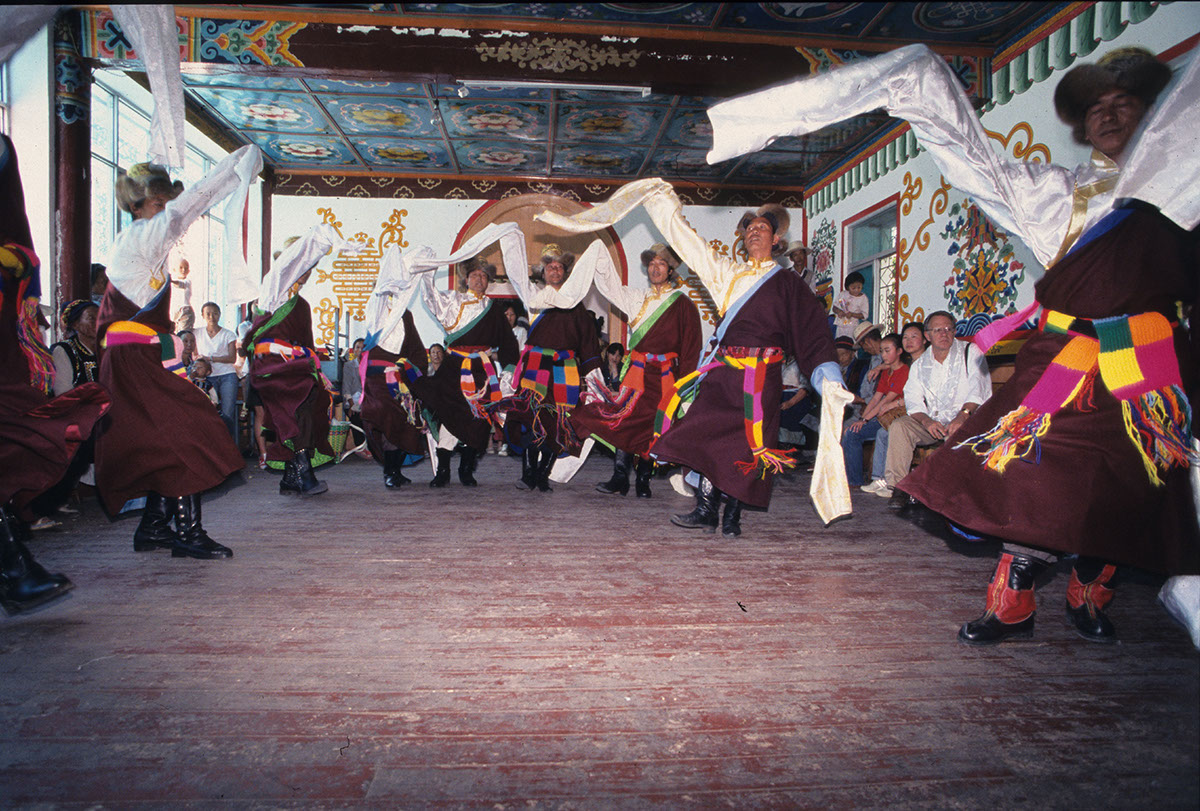 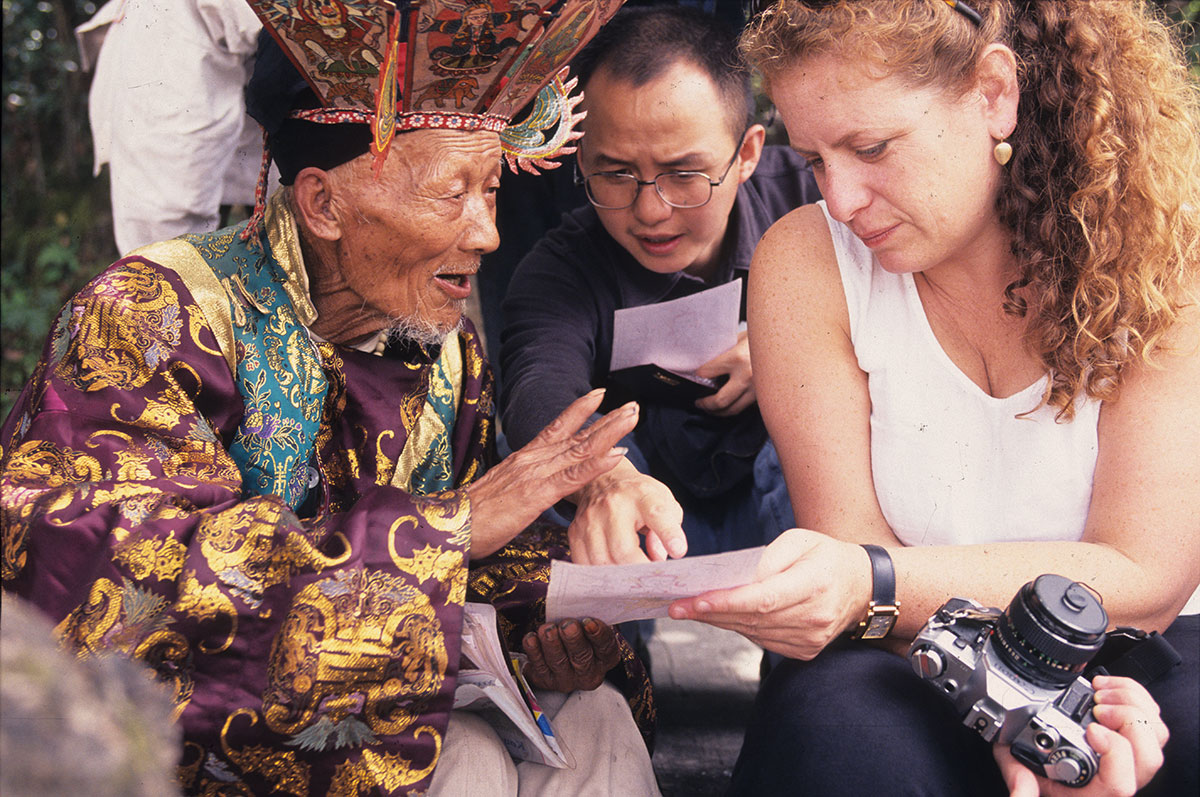 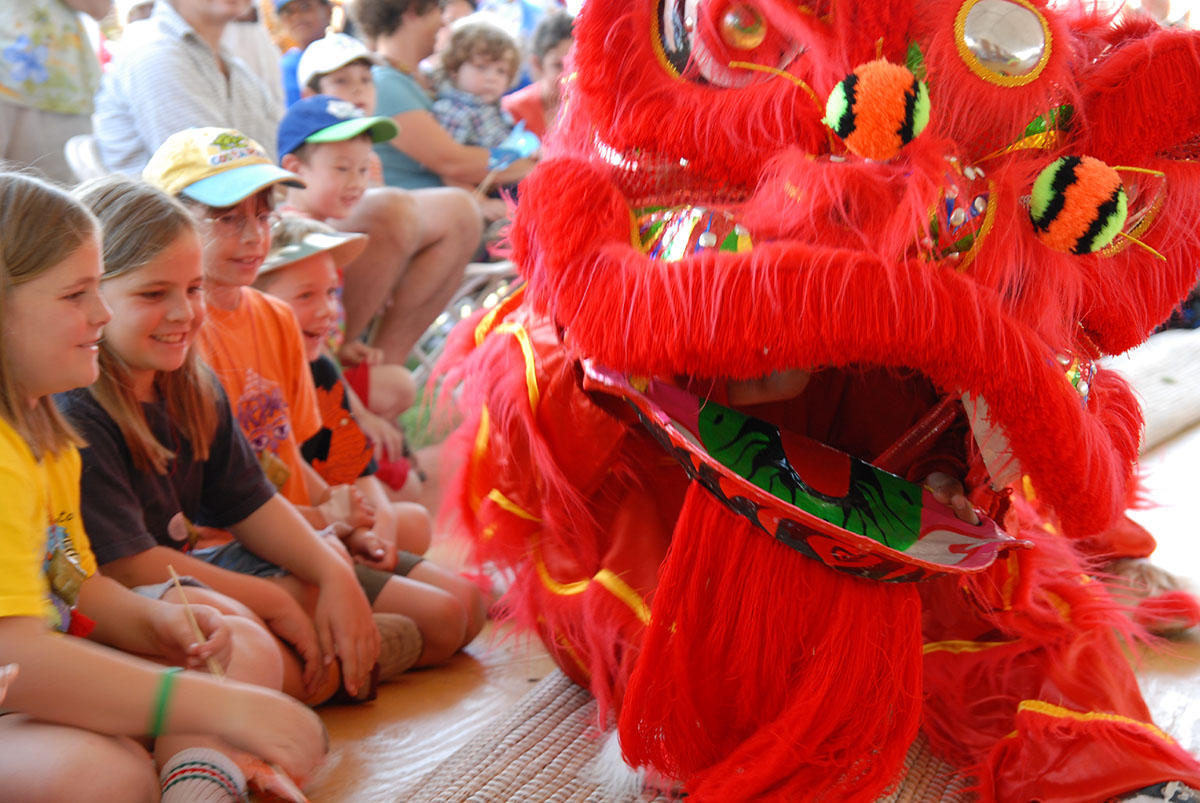 More than 60 million people live in the Mekong basin - speakers of at least a hundred languages. Some of the region's ethno-linguistic groups, such as the Khmer, Thai, and Vietnamese, number in the tens of millions, while others have populations of only a hundred or so people. Their livelihoods are as diverse as their ethnicities: the Mekong region includes tiny mountain villages of a dozen households, where people eke out a living from hillside rice fields, and densely populated plains and deltas, where the river's waters flow into rice paddies that are harvested three times annually. But the region also includes bustling modern cities of a million or more people and industries ranging from rubber plants and textile factories to high-tech production facilities. Unparalleled in the diversity of its fisheries, the Mekong region is not only the rice bowl of Asia, but also its fish basket.

How to introduce this huge, diverse, and complex region to visitors at the Smithsonian Folklife Festival? How to select some two hundred people to represent tens of millions? How best to give Festival visitors a sense of the challenging cultural choices that confront the Mekong region and its inhabitants at the beginning of the twenty-first century? And how to mobilize the support of governments, funders, researchers, and communities to make the whole effort possible? These were the questions facing Smithsonian experts and their Mekong counterparts as planning for the Festival began in 2004.

A unique and complex process of collaborative planning brought together a network of regional experts who shaped the program over several years in a series of consultative meetings, training workshops, and review sessions, made possible in large part by the Rockefeller Foundation. Their first task was to identify several themes that would guide the research, planning, and participant selection and would later help Festival visitors gain a coherent sense of this vast and complicated region.

The first theme was that of the Mekong River itself - of water as the sustainer of life. The second theme examined rivers and water as the focus of shared symbolic meanings and artistic expressions for the peoples of the Mekong region. The third theme considered the Mekong and its tributaries not only as channels of communication and commerce, but also, in places, as daunting barriers that inhibited contacts between neighbors. Finally, the fourth theme took up the tremendous diversity - geographic, environmental, ethnic, and cultural - that characterizes the Mekong region. Throughout, the organizers and several dozen Mekong-region researchers, who carried out the fieldwork leading to the Festival, were guided by the fundamental understanding that certain core cultural values were shared among the peoples of the Mekong region, despite the great diversity of their languages, religions, and histories.

Visitors to The Mekong River: Connecting Cultures program could not hear the sounds of cocks crowing to welcome the rising sun or of kites singing to chase away the clouds. They did not smell the pungent fumes of burning gunpowder as rockets in the shape of nagas lofted skyward to ensure sufficient rain or the heady odors of fish fermenting in pots to make Cambodian prahok, Lao pha daek, or Vietnamese mam ca. They could not view the pockets of fog settling into Yunnan mountain passes in the morning sun, the flood waters stretching from one horizon to the other at the end of the rainy season, or the verdant green of rice paddies as far as the eye can see. But Festival organizers were confident that the two hundred musicians, singers, cooks, craftspeople, ritual specialists, and dancers who came to the banks of the Potomac from the banks of the Mekong were, nevertheless, able to give visitors a sense of the region and its remarkable people.

The program was produced in partnership with the Ministry of Culture and Information of the Socialist Republic of Vietnam, the Ministry of Culture of the Kingdom of Thailand, the People's Government of Yunnan Province of the People's Republic of China, the Ministry of Information and Culture of the Lao People's Democratic Republic, and the Ministry of Culture and Fine Arts of the Kingdom of Cambodia, and in collaboration with Aid to Artisans, Amrita Performing Arts, China Yunnan International Culture Exchange, Connecticut College, and the Princess Maha Chakri Sirindhorn Anthropology Centre. Major donors included the Rockefeller Foundation, the Ford Foundation, and the Henry Luce Foundation. Additional donors and supporters included the McKnight Foundation, American Express, the Asian Cultural Council, and the Smithsonian Women's Committee. Additional funding came from the Henry J. Fox Trust and Refugees International.

One of the world's great rivers, the Mekong begins in the melting glaciers of the Tibetan Plateau, in China's Qinghai Province, and ends some 3,ooo miles away,

Pots and Jars Along the Mekong

Potters are at work in villages all along the Mekong River and its tributaries. Women potters make earthenware--porous pots used for cooking directly over a ...

Textiles Along the Mekong

Women from uplands and lowlands along the Mekong River and its tributaries produce some of the world's most beautiful and technically sophisticated weaving. The

Khmer Music Along the Mekong

Khmer music is a vital aspect of Khmer life and culture, epitomizing Cambodia--its society, arts, customs, and beliefs. Khmer music in Cambodia and in the Khmer