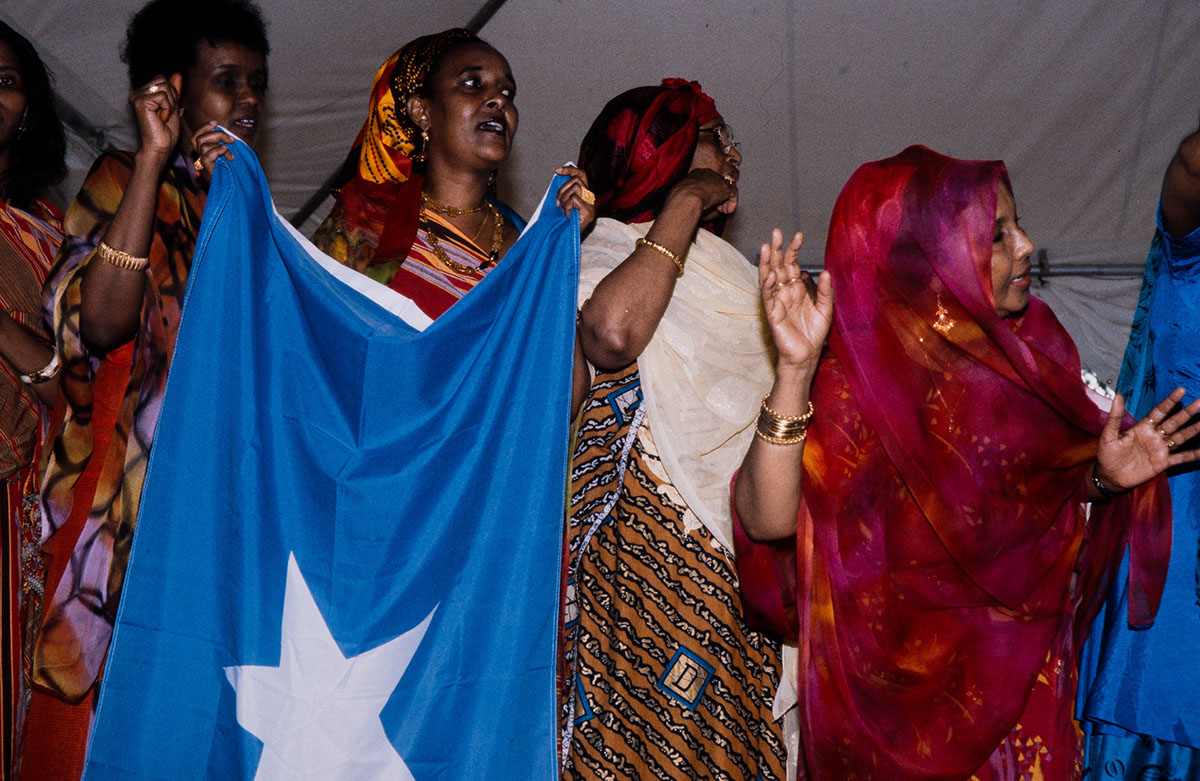 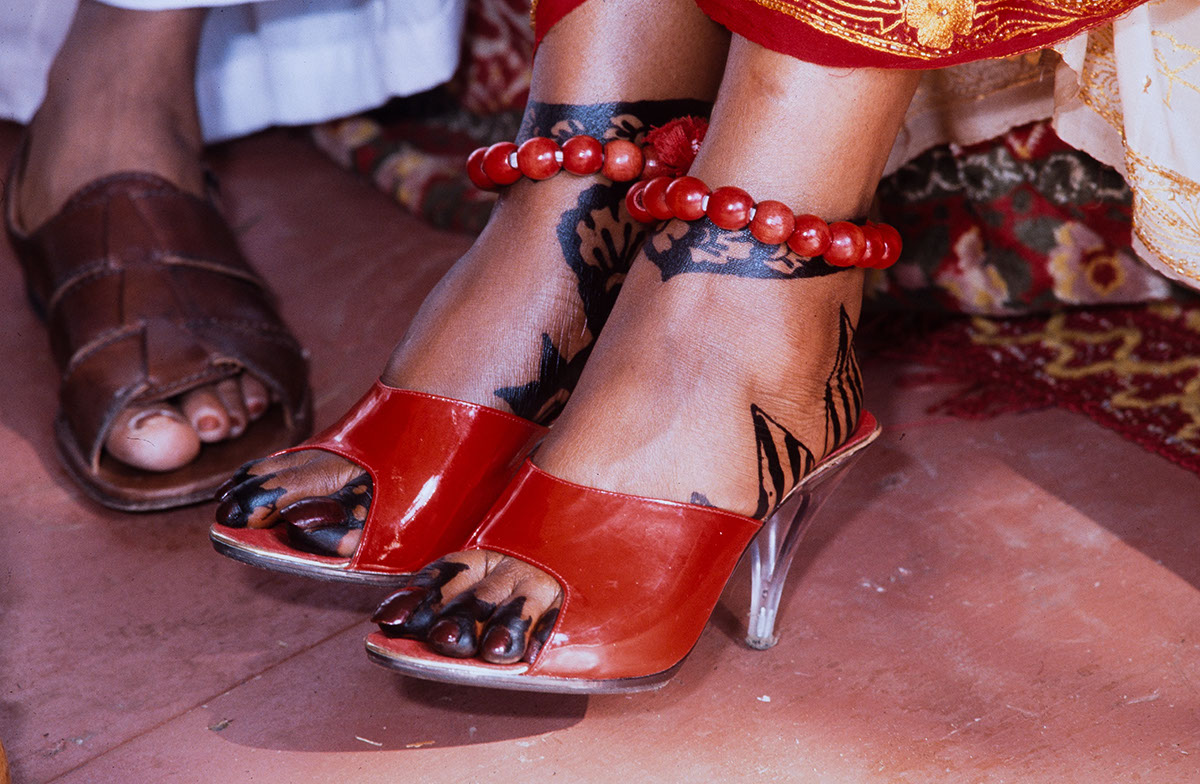 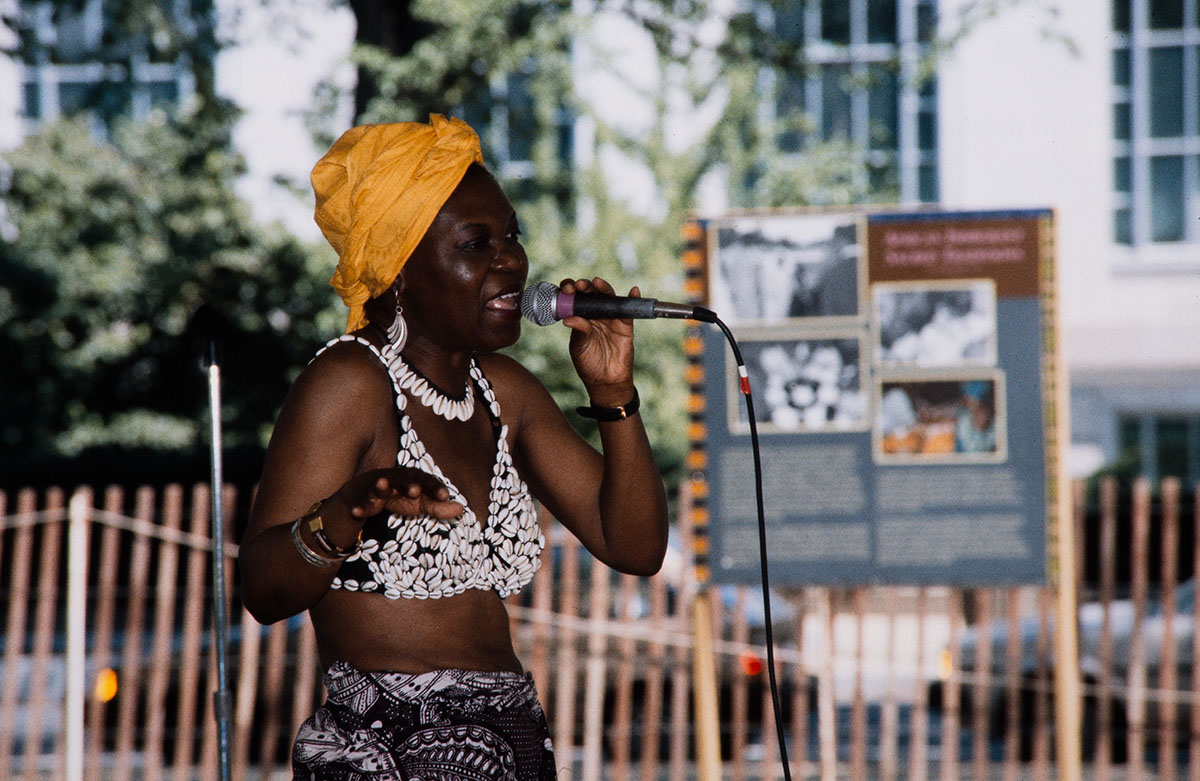 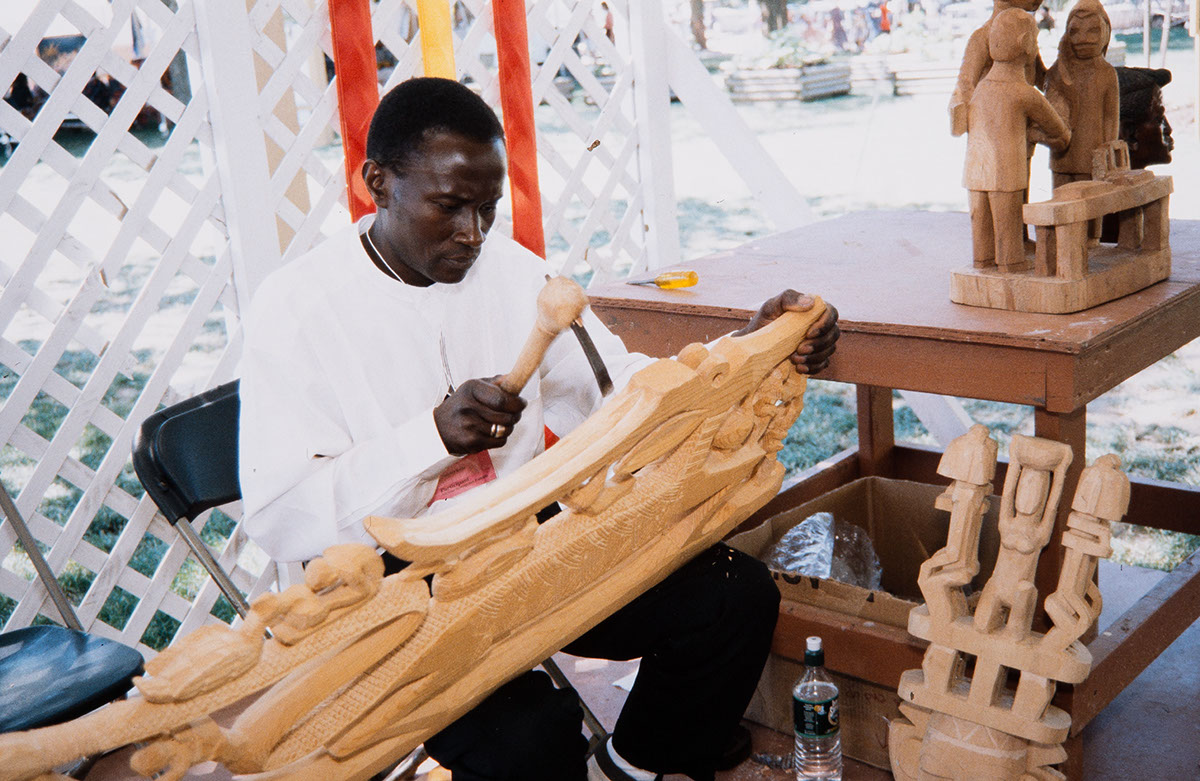 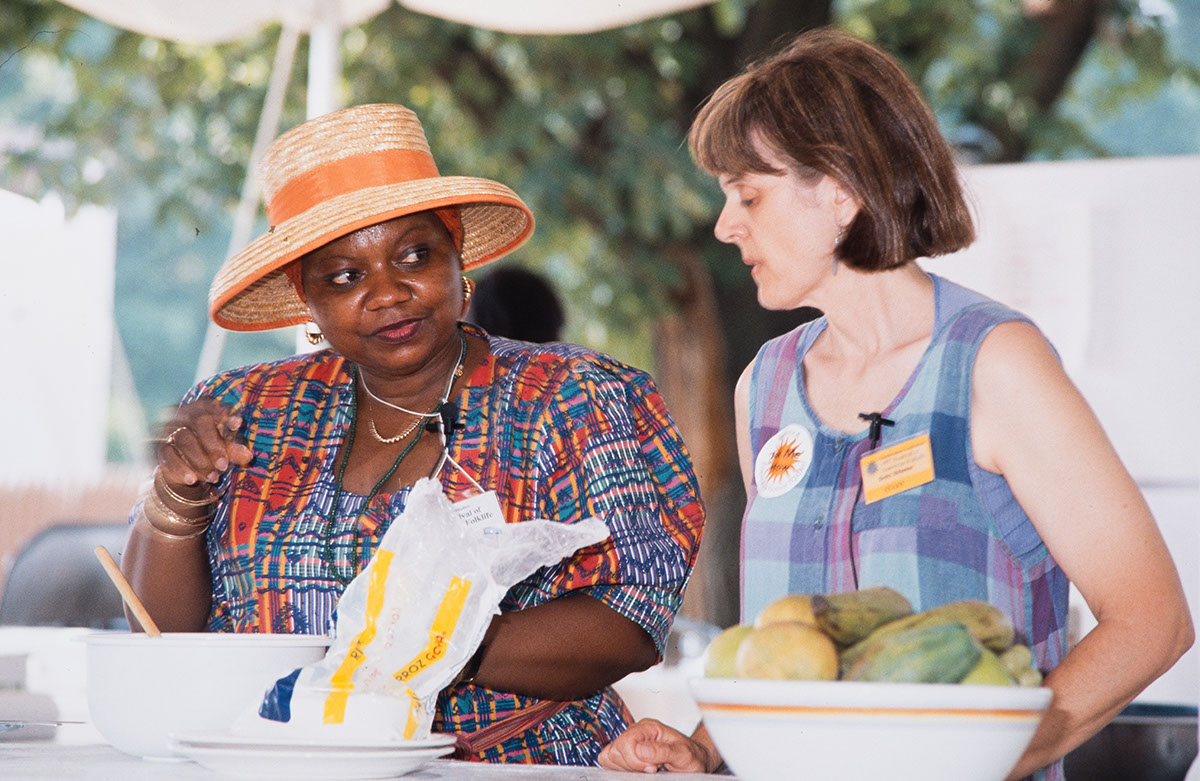 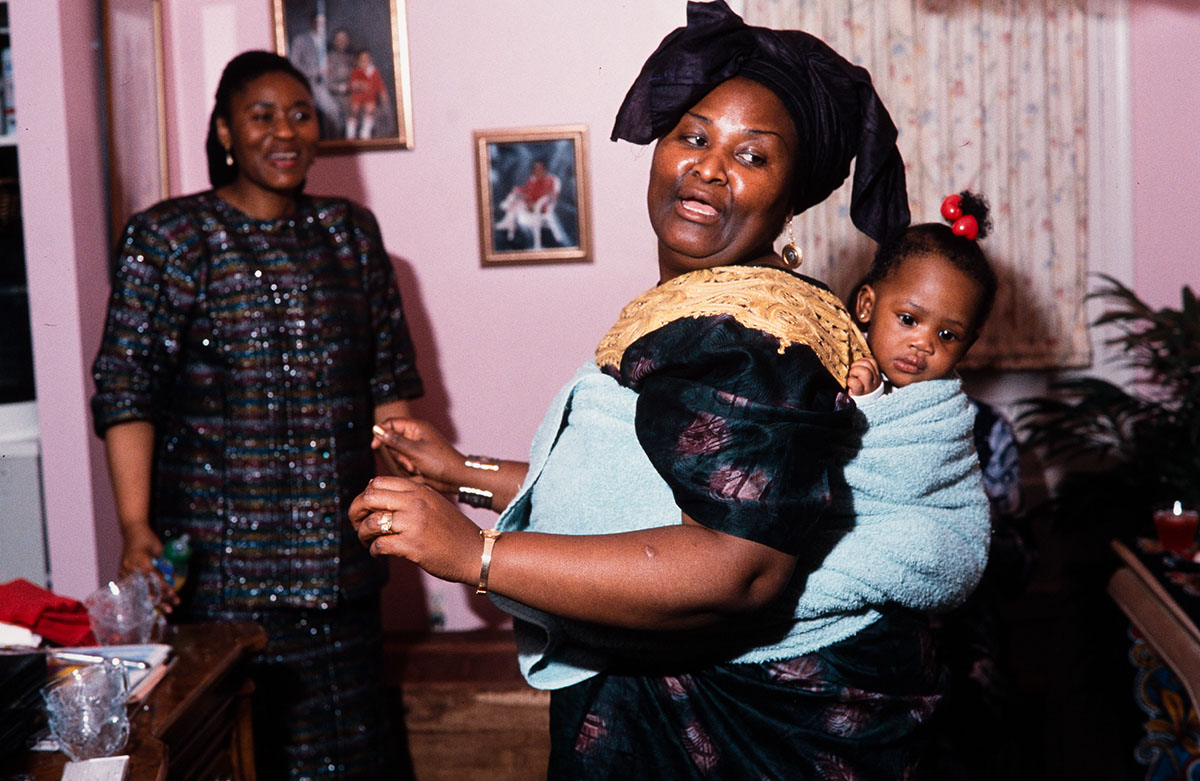 Across the Washington metropolitan region, African immigrants actively redefine their ideas of tradition and community by creating institutions and events that draw on African expressive forms. African-born area residents establish language and culture schools where their American-born children learn the social and artistic skills of their ancestral homes. Family and friends come together to celebrate births, weddings, and other rites of passage. African immigrant entrepreneurs employ their knowledge of personal adornment and of the social needs of their home communities to serve fellow immigrants and other Washingtonians.

The Festival program explored several cultural dimensions: the use made of knowledge, skills, values, and expressive forms brought from home to construct new communities and identities; and the new traditions, growing from encounters with groups in the African Diaspora and in American society as a whole, that contribute to the rich cultural landscape of the United States.

As continental Africans living in the nation's capital region have increased in number, they have stamped their presence on the ethnic map and cultural calendar of the area. Africans present cultural programs, conferences, and forums about their communities. Using traditional skills and knowledge, African-born entrepreneurs develop services for immigrants and the community at large. African immigrants bring to America ideas of ethnic and region-based organizations that were devised when Africans flrst migrated from rural towns to urban centers in Africa. These patterns of organization continue in the United States. Community institutions sometimes use traditional forms of social organization like tontines - revolving credit and savings societies - other kinds of investment groups, burial societies, and town associations to get things done.

As African expatriates become immigrants, and as immigrants become citizens, they use aspects of traditional culture to maintain connections with their roots, affirm their identity, maintain positive selfimages for their children, express their links to other African world people, and assert their unique contribution to their land of adoption. The multi-year Festival program sought to contribute, through its research and public presentations (see also the 1995 concert series that inaugurated the project), to greater understanding of the cultures and experiences of continental Africans living in the United States, and in particular to promote connection and collaboration between Africans in America and African Americans, between Washington's immigrants and its long-established populations.

Support for this program came from the Smithsonian Institution Educational Outreach Program and the Recording Industries Music Performance Trust Funds.

In Somalia, Rukia Hussein grew up surrounded by the bounteous expression of buraanbur, a tradition of women's sung poetry and dance. In the 1960s, she was a ...

Islamic Celebrations in the African Immigrant Communities in ...

Immigrants from the Muslim world have introduced global Islam into the American cultural and religious mosaic. They can be easily seen at the rituals, rites, ...

Nature and Significance of Durbar in Ghanaian Societies

Ghanaian traditionai rulers sit in state and meet their people at events called durbars (an Indo-Persian term for "ruler's court"). To the accompaniment of ...

In Umuchu in Nigeria, as in most of Africa, "masquerade is exclusively for men. It's a macho thing," said Mr. Victor Emenuga, a member of the Umuchu cultural ...

Unless a baby is named within seven to nine days of its birth, according to Yoruba tradition, it will not outlive its parent of the same sex. This belief ...

Passing Culture on to the Next Generation: African Immigrant ...

Language and culture are inextricably intertwined. Culture is the totality of ways of living built up by a group of people in response to how they see their ...

In Senegal you greet people heavily, that is, tedinne, which literally means "make heavy." When Senegalese people greet you heavily, you know they think you are

As African people have migrated to different parts of the world including the United States, their artistic expression of their values and beliefs has helped ...

More than 40,000 Washington-area residents claim the Ethiopian region as their birthplace. They are members of several culturally, religiously, linguistically,

In almost all African cultures food is a traditional art. Simple or elaborate, frugal or opulent, food plays a vital role in affirming individual ethnic ...

Starting a new business requires innovation, risk taking, hard work, and a lot of discipline. For African immigrants, who have settled in the Washington, D.C. ...