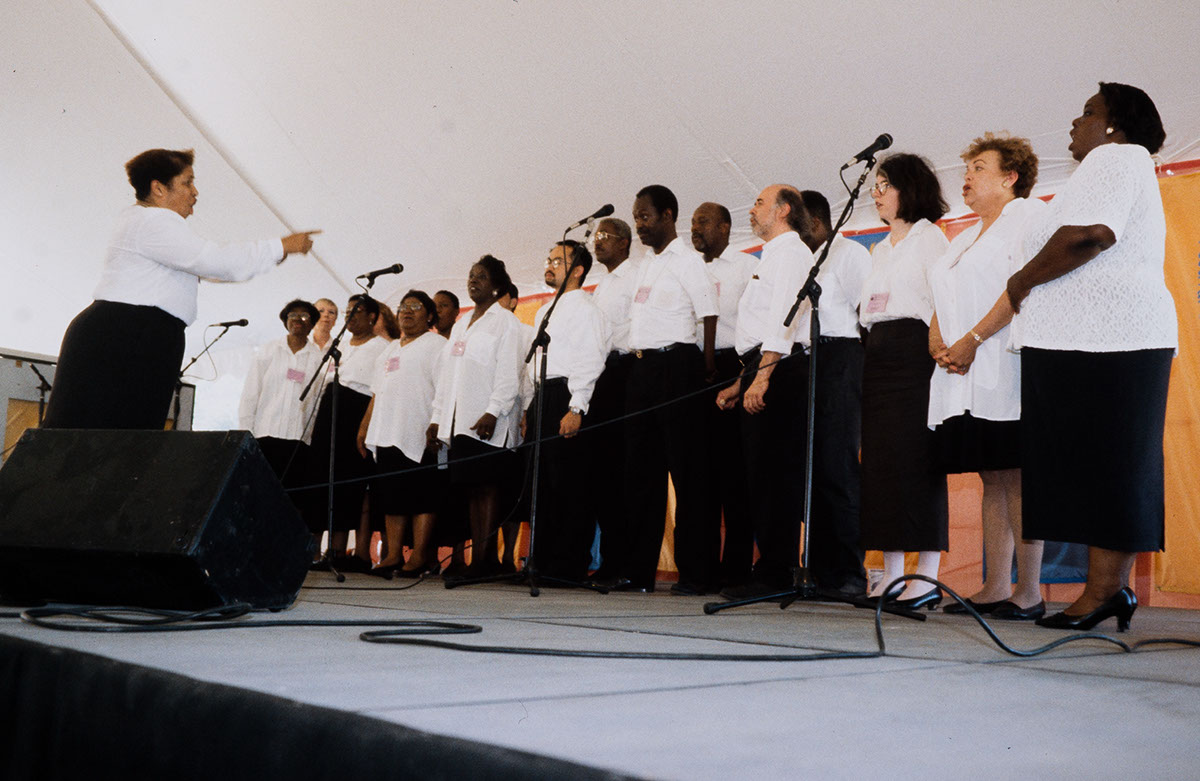 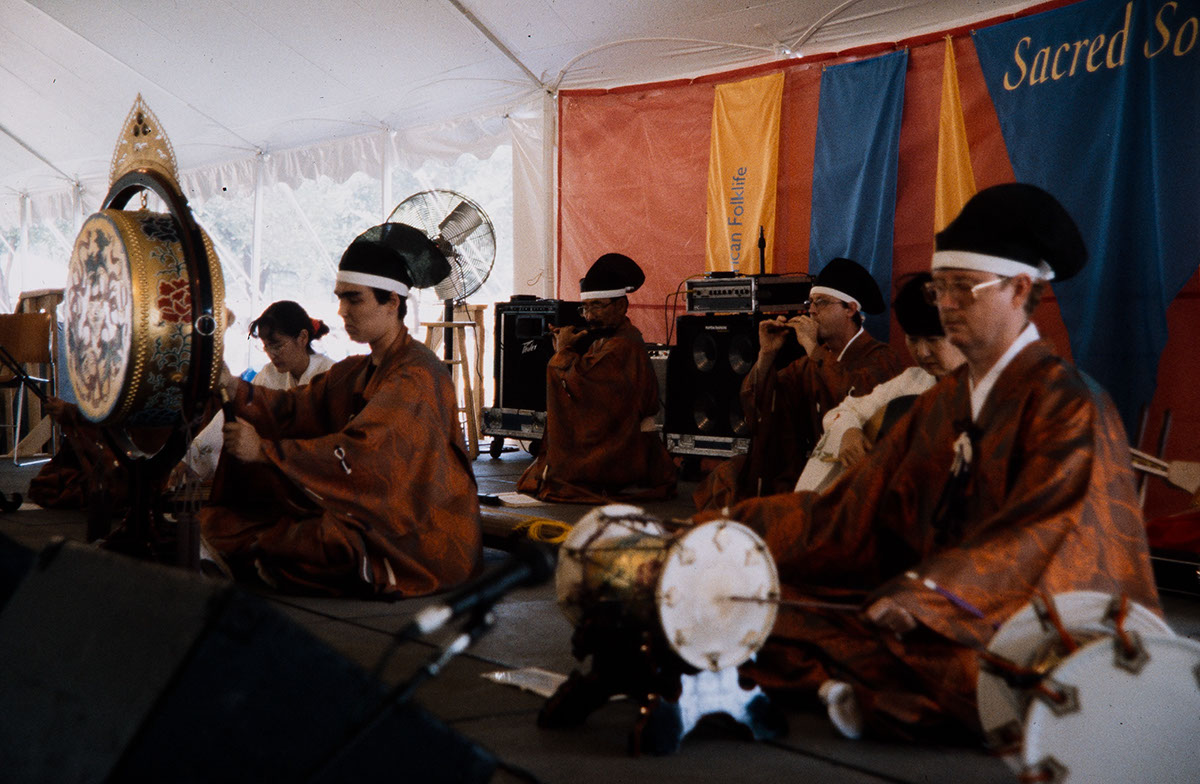 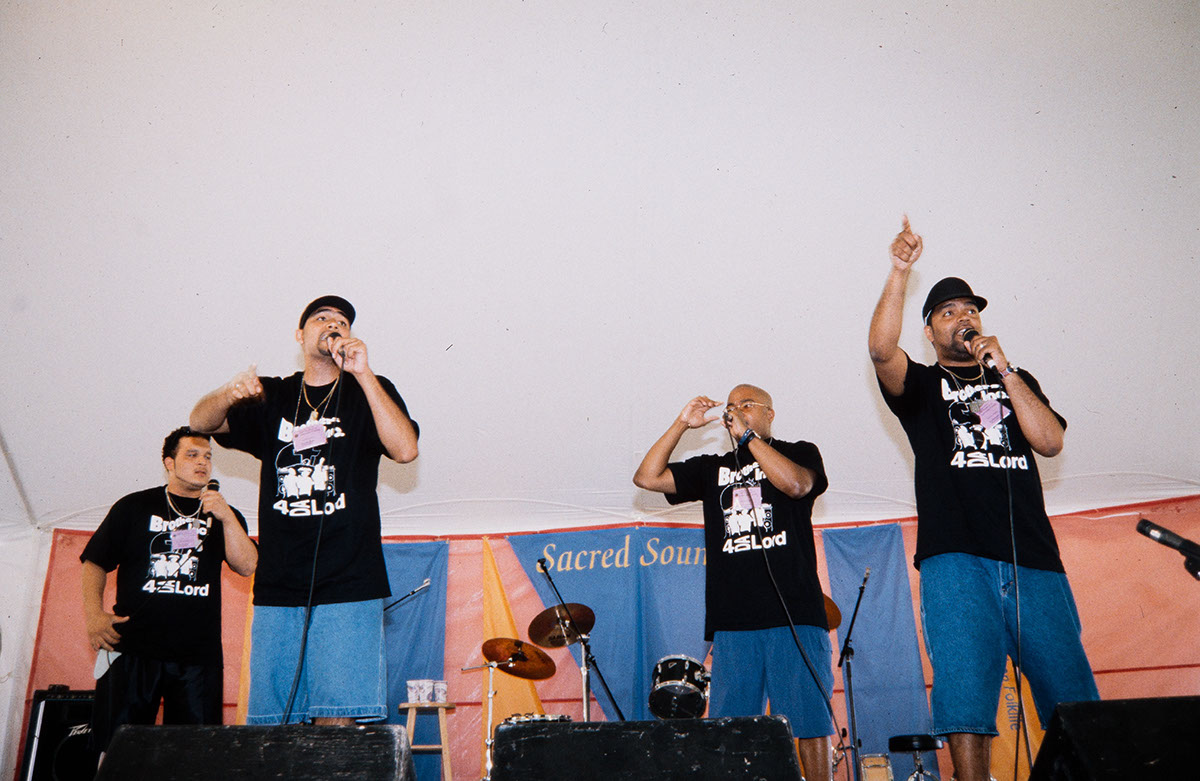 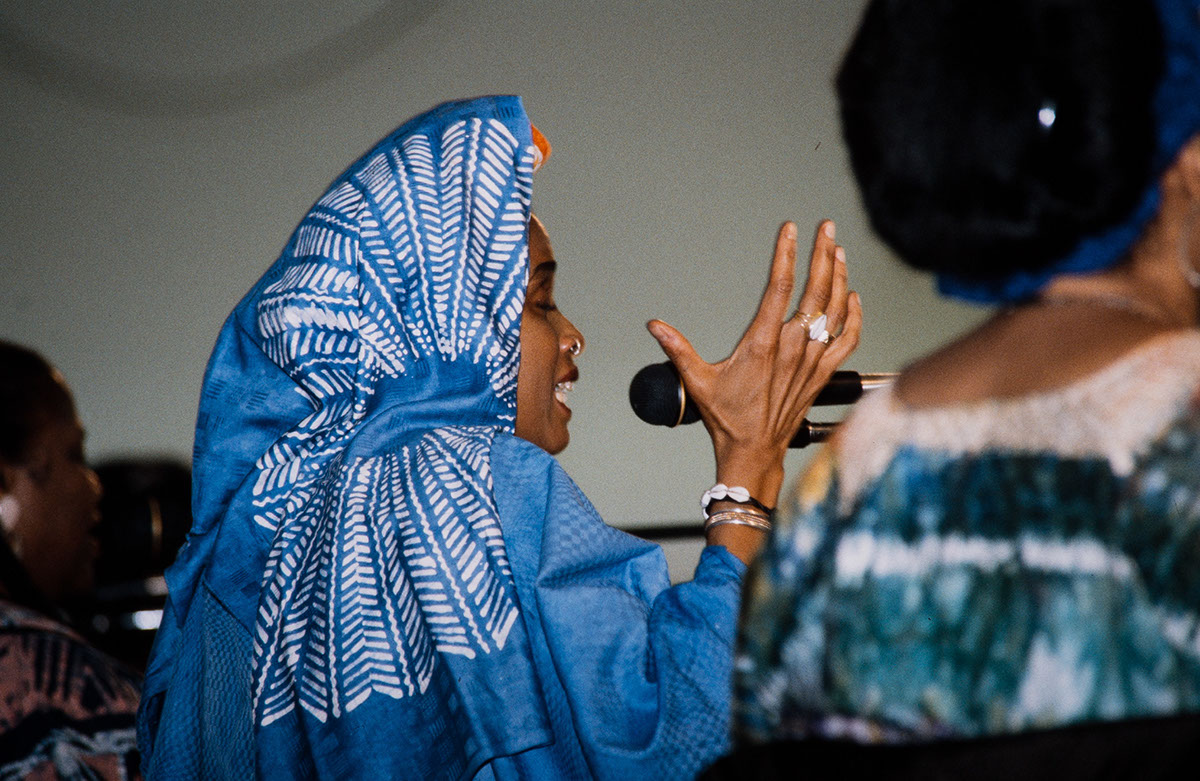 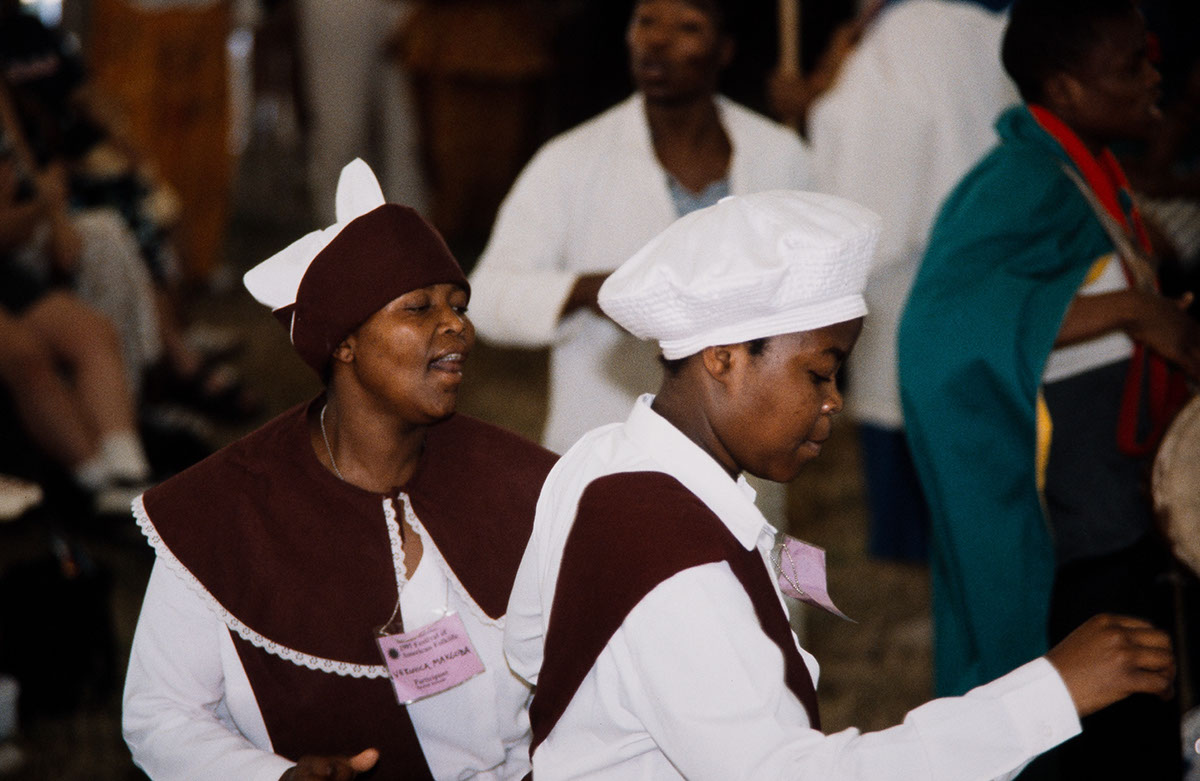 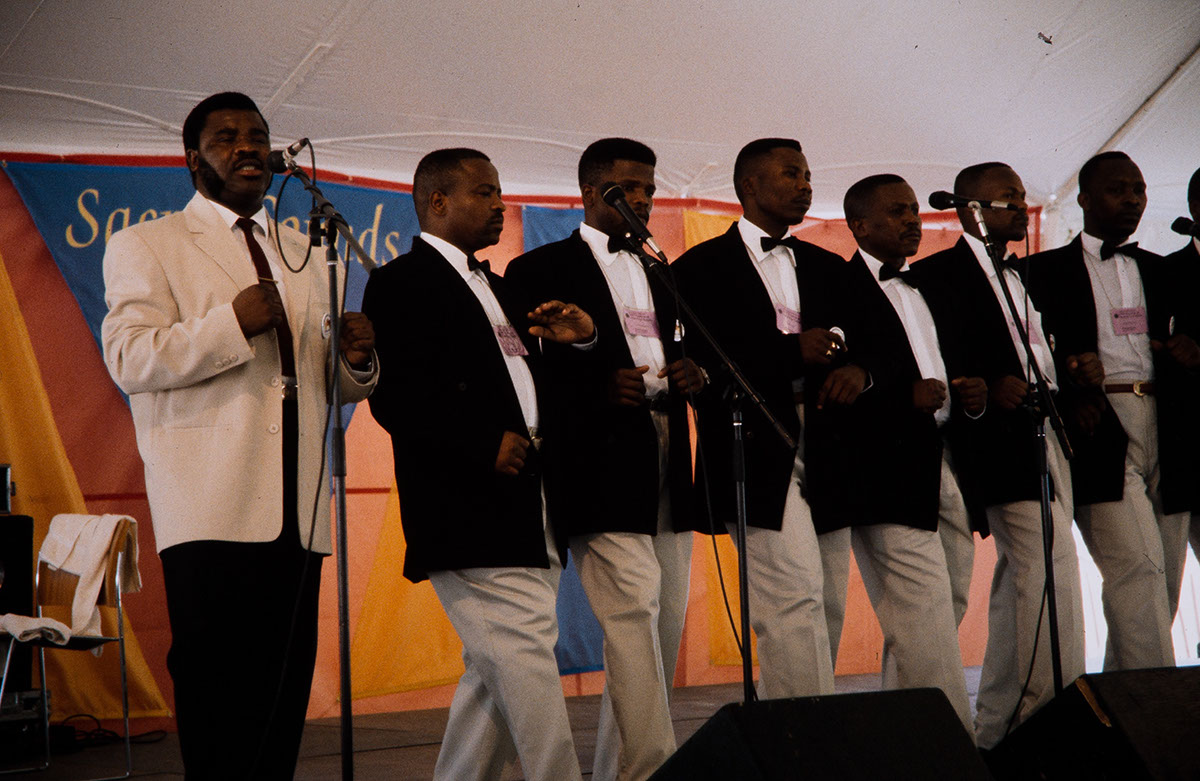 Reflecting the widespread and growing public awareness of and interest in religious beliefs and spiritual meaning in everyday life, the 1997 Festival program Sacred Sounds: Belief & Society featured a variety of religious and spiritual traditions.

Throughout world history sacred sounds have served as a medium for human cultures to raise queries, advance beliefs, give praise, and inspire others to join in exploration of the mysteries of earthly existence and the greater universe. These sacred sound traditions encompass a broad range of expressive forms: melodic and repetitive vocalizations called chants; sharp, passionate, emotion-filled hums, groans, shouts; percussive, rhythmic hand claps and foot stomps; and extended song, sermon, and instrumental arrangements. Instrumental music, sung prayers, and mystical chants have been used to communicate with the divine, to unite religious communities, and to express moral, political, social, and economic aspirations. Sacred sounds in many traditions are the central means for invocation of the spirits. The utterance of particular sounds is thought by many cultures to form a connection to all the elements of the universe. In some belief systems music and sound vibrations are pathways for healing body, mind, and spirit. Among the wide range of human expressive behavior, the capacity to infuse the joys, sorrows, and humility that characterize religious and spiritual beliefs into oral poetry, chants, songs, and instrumental music is certainly one of the most powerful and inspirational ways all peoples and cultures acknowledge the spirit of the Supreme in their lives.

Through performances and discussions with Festival visitors, Festival participants from Old Regular Baptist communities in Kentucky, hip hop Christian worshipers from The Bronx, New York, African- American gospel choirs and quartets, representatives of South African indigenous-Christian blends of worship and popular music, and practitioners of Islamic and Judaic traditions in Jerusalem, among other religious and cultural communities, shared their perspectives and feelings about the intrinsic nature of their sacred cultures and the musical extensions of their faiths into the secular world.

James Early and Ivy Young were Curators of the program. Support for the program came from the Recording Industries Music Performance Trust Funds and the Republic of South Africa Department of Arts, Culture, Science, and Technology.

Reflecting the widespread and growing public awareness of and interest in religious beliefs and spiritual meaning in everyday life, the 1997 Festival of ...

Faith in Action: Mokhuhku of the Zion Christian Church

The Zion Christian Church (ZCC), founded in 1924 by Engenas Lekganyane, is the largest of the African indigenous churches in South Africa. These churches "...

Songs of the Night: Isicathamiya Choral Music from KwaZulu Natal

Picture a dark, dilapidated hall in downtown Johannesburg. In it are only a few rows of broken plastic chairs and one or two bare electric light bulbs hanging ...

Old Regular Baptists of Southeastern Kentucky: A Community of ...

The singing of the Old Regular Baptists from the Kentucky coal-mining country in the heart of the southern Appalachian Mountains is one of the oldest and ...