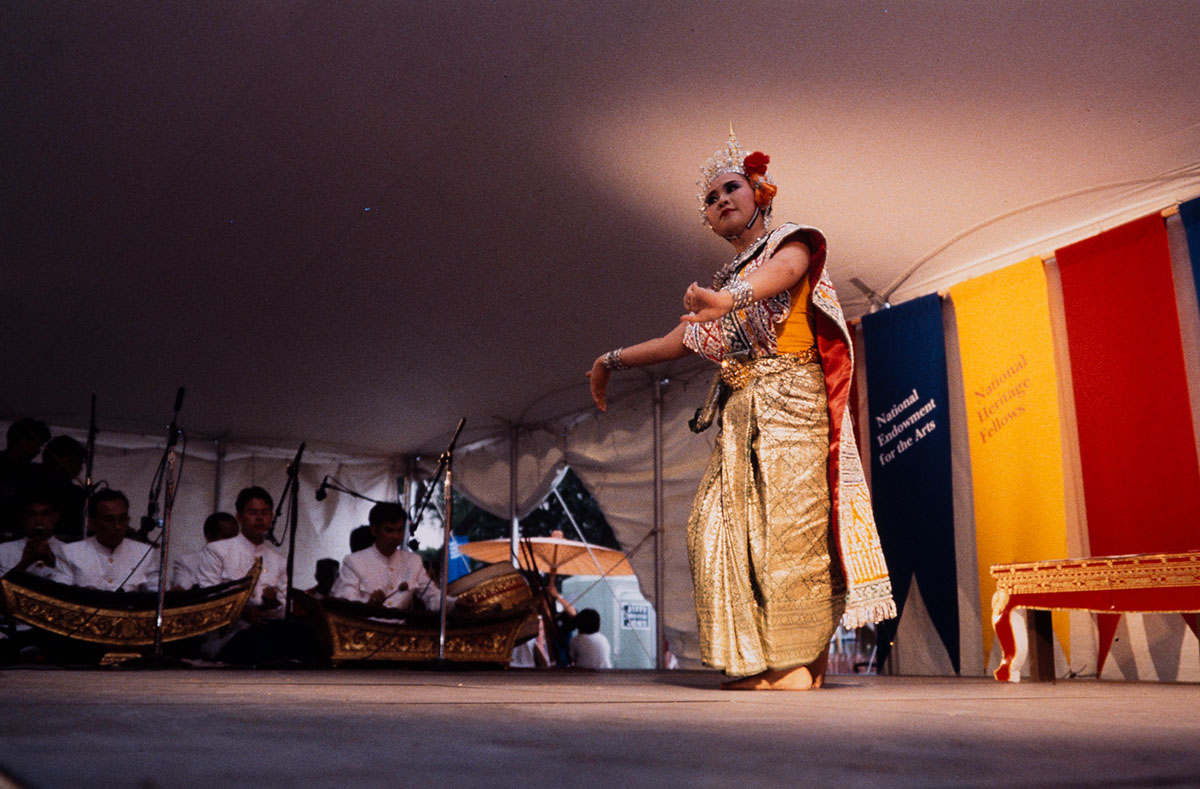 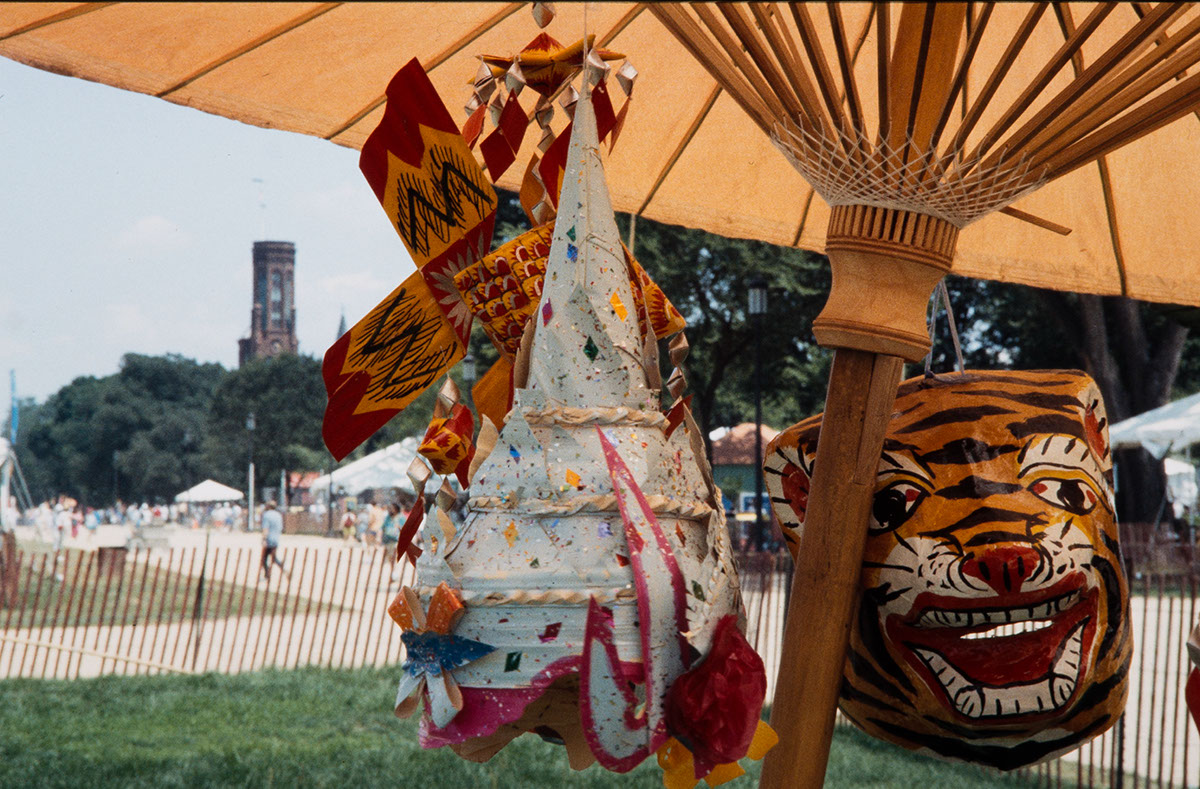 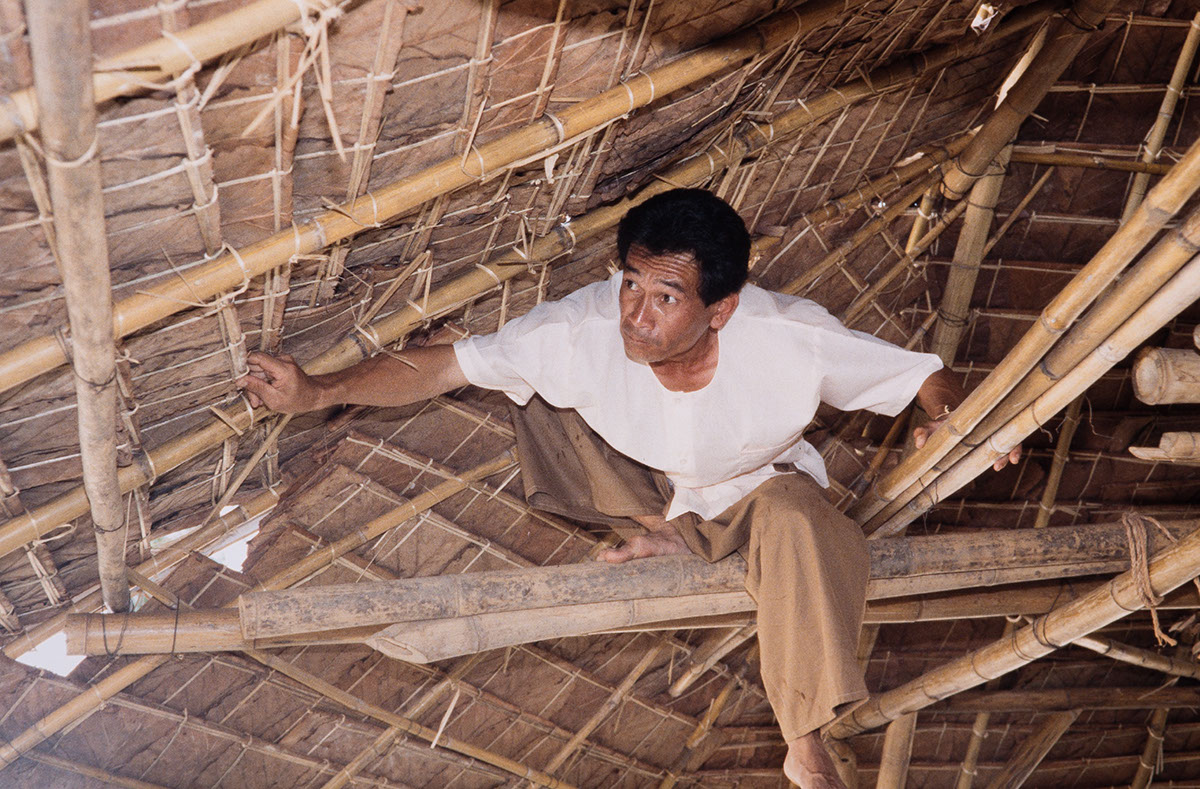 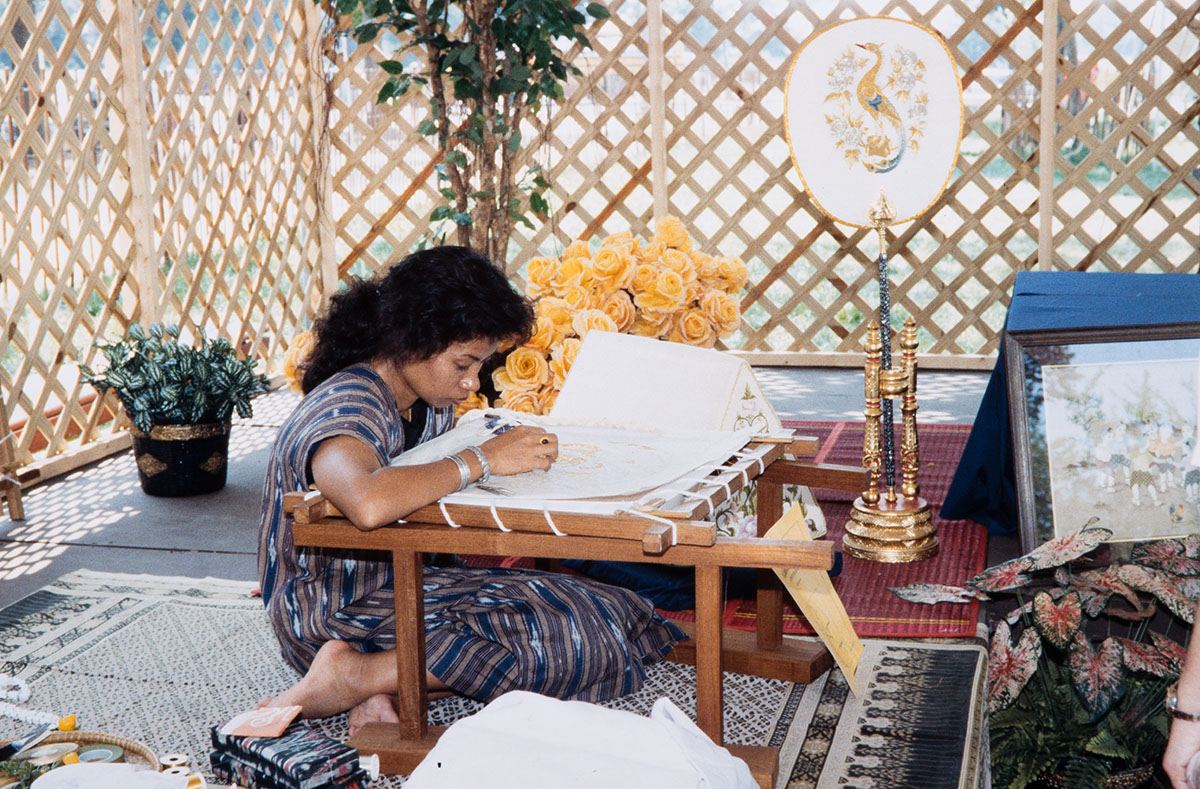 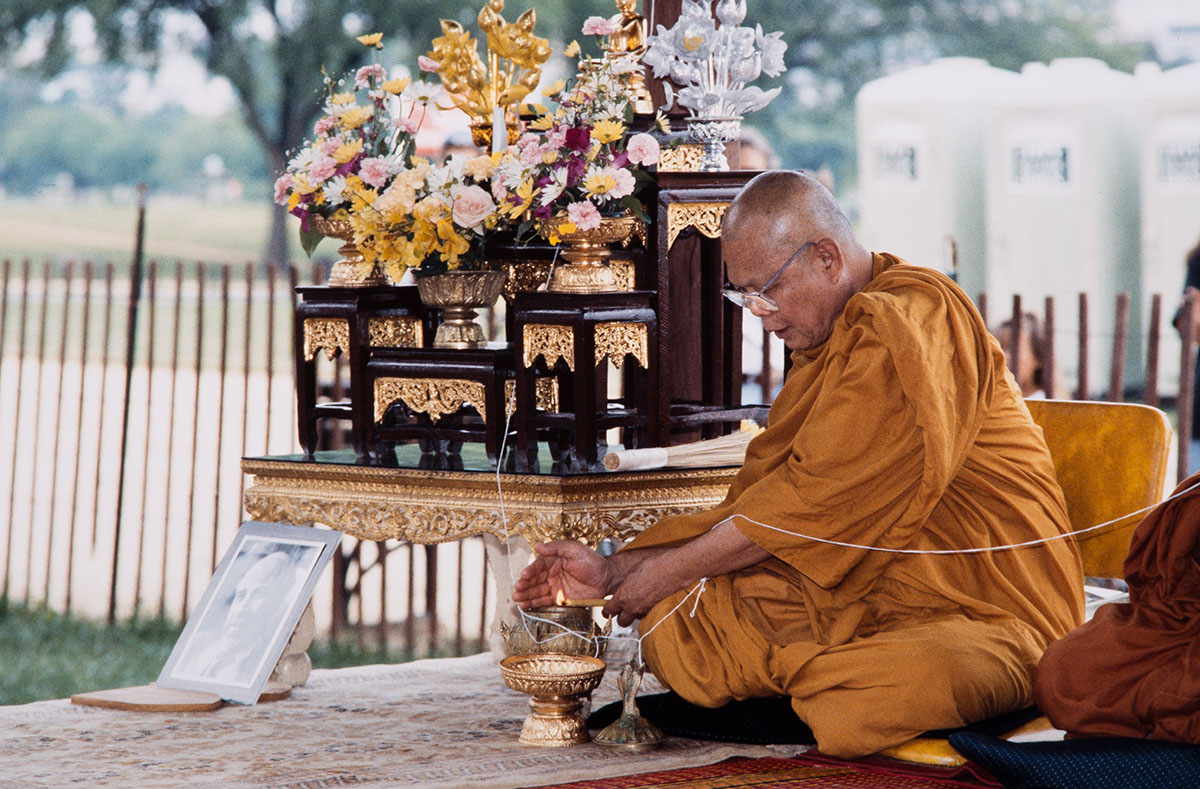 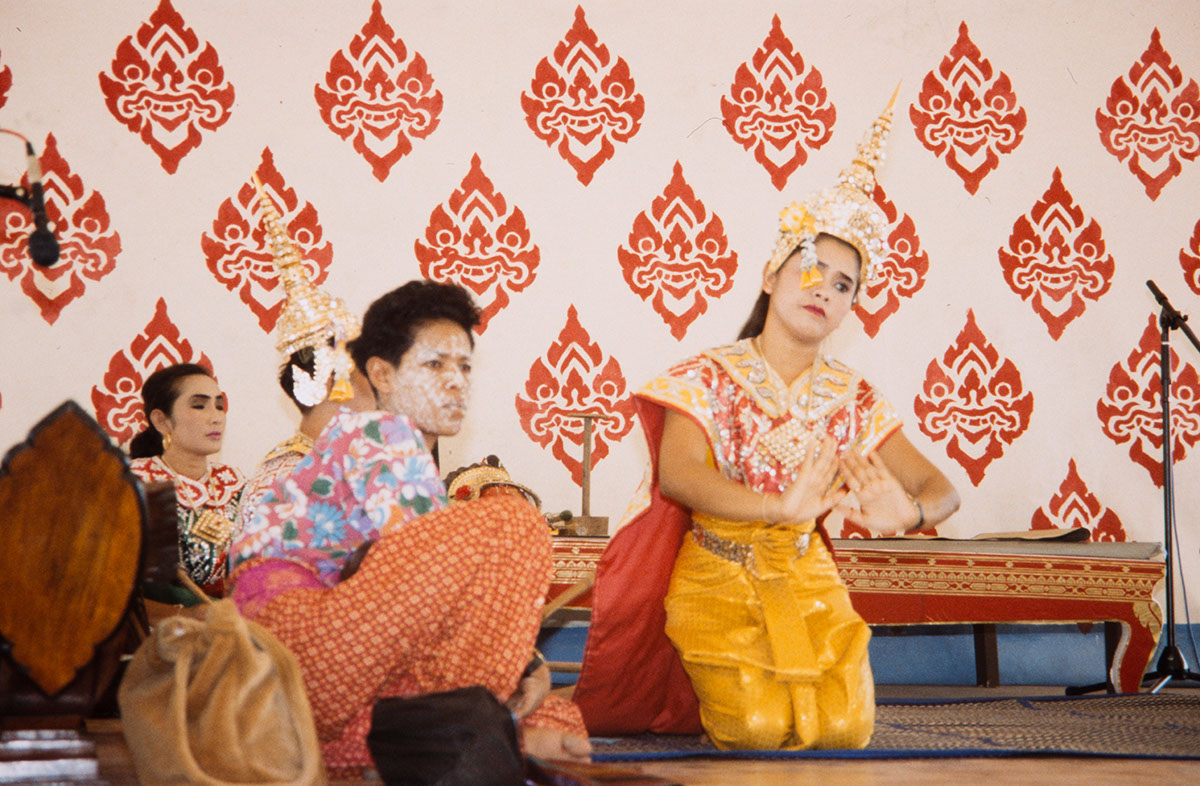 It was challenging to organize a Festival program that could adequately represent the cultures of the complex society that is contemporary Thailand. A partial solution was to focus on three arenas of Thai cultural life - the household, the temple fair, and the royal court - where cultural expressions ranging from food to performance genres and crafts serve to define what is typically Thai. The Festival program explored these three arenas of Thai life in which distinctive aspects of the nation's culture are manifest.

Home and family remain important anchors in the lives of Thai people as they do in the lives of many people in rapidly changing societies. Most ceremonies for birth, marriage, and death, which often employ Hindu rites and include the participation of Buddhist monks, take place in the house. And many of the deeply rooted craft traditions of Thailand - weaving, metalwork, and even the production of instruments and masks for various performance traditions - are still conducted at home, using skills and knowledge passed down within family and community. In the Household Area of the Festival, visitors could find these home-based traditions, together with a narrative stage where participants discussed the changing cultural traditions of the country.

Many public events, including fairs, take place at a local religious institution called a wat. Found in almost every village, the wat provides a home and school for monks, as well as a center for family, community, and national celebrations. It also can provide a temporary shelter for homeless persons and, in the city, for newly arrived immigrants. The temple fair is an opportunity for the community to meet, buy food and small items including Buddha amulets, and see performances by local dance-drama troupes. Funerals are also sometimes held in the wat compound and may include music and traditional performances such as the puppet theater. The Temple Fair Area at the Festival sought to recreate the feel of a wat celebration with large shade umbrellas and displays. Mural painters and gilt artists decorated a temple wall nearby where kite makers and lacquerware artists demonstrated the skills of temple fair crafts. Nearby a stage hosted puppet theater, lakhon chatri dance-drama, and mo lam singing.

Those familiar with Thailand agree about the pervasive and ongoing influence of the monarchy and its culture on the region up to the present day. This influence affects and is intertwined with the cultural lives of most Thai people. There is an enduring artistic exchange between court arts and village traditions. The artists of the court and their traditions have continued to come from villages throughout Thailand - weavers from the Northeast, dancers from Cambodia, ceramics from Thai-Chinese potters. The same close interrelationship that exists between court and village is also found between temple and household.

Throughout the Festival program the audience had an opportunity to see these multiple connections. A village mask maker fashioned wai khru masks used ritually by performance troupes, monkey masks for a court khon performance, and toy masks given to children at home and sold to tourists at a temple fair. A Pu Thai weaver from Kalasin or a Khmer weaver from a small Surin village wove cloth for everyday wear, silks for wear at the annual temple fair, and fine silk sashes for others to wear at court. The lakhon chatri drama troupe appeared at a temple fair in courtly finery but soon began to make fun of ancient ways and modern predicaments. Traditions of the home, the temple fair, and the court - interwoven throughout Thai history - were transported to the National Mall to provide Festival visitors a view into contemporary Thai culture.

M.R. Chakrarot Chitrabongs and Richard Kennedy were Curators of the program, and Charlene Day and Jaree Umlamai were Program Coordinators; Kulwadee Charoensri served as Research Coordinator.