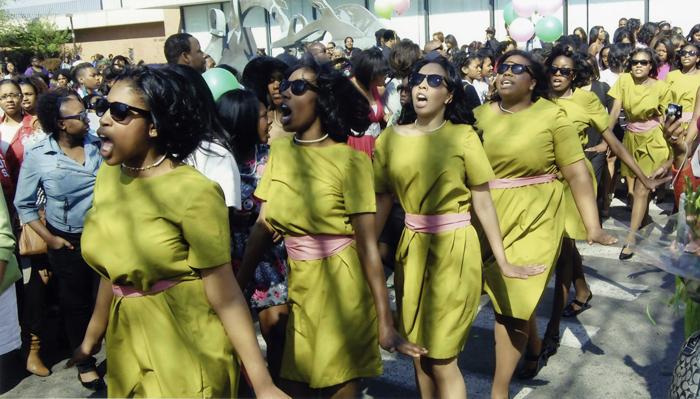 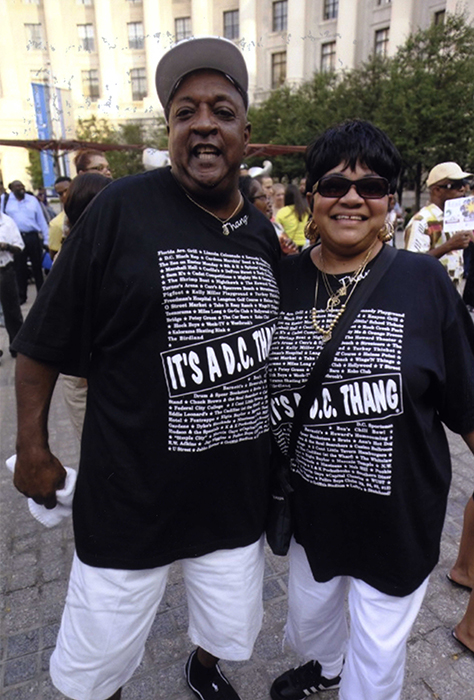 Alpha Kappa Alpha was the first African American sorority, incorporated in 1908 at Howard University. At a homecoming celebration, new pledges parade through the campus in the pink and green colors of the sorority.
Photo by Ashley Matthews
The T-shirt worn by this couple at a concert by the late Chuck Brown communicates this couple’s strong sense of identity as African Americans who grew up in Washington, D.C.
Photo by Harold Anderson

Individuals and groups communicate their creativity, self-definitions, and community affiliations through the way they dress and adorn their bodies. Communities of style are groups that share a common style of dress shaped by similar experiences, knowledge, dress practices, values, and ideas about what is pleasing, appropriate, and beautiful.

African Americans “belong” to many communities variously defined by ethnic, class, gender, regional, religious, political, cultural, and other affiliations that exist in complex interrelationship with each other. Accordingly, there is no single African American aesthetic of dress; there are many aesthetics that at times overlap, intertwine, and are juxtaposed in visual dialogues defining difference and belonging. Communities possess their own unique sets of aesthetic cultural markers that contribute to a distinctive style. The challenge and goal of the Will to Adorn project is to represent this complexity and diversity, while also highlighting those approaches, processes, and discrete elements of dress and adornment among African Americans that grow out of shared or common cultural experiences, traditions, and social histories.