The Smithsonian Folklife Festival in Medellín and Bogotá, Colombia

In early December, Cristina Díaz-Carrera and I eagerly travelled to Bogotá to witness and enjoy the re-staging of the Colombia: The Nature of Culture 2011 Smithsonian Folklife Festival program, which formed part of the renown Expo Artesanías Fair held annually at the Corferias Exposition Center. In our earlier conversations with the Ministry of Culture, Minister Mariana Garcés Córdoba reiterated the importance of bringing the Festival program back home, and five months later, the journey through six ecosystems and the major metropolitan cities of Colombia happened again. The Colombia research, design, and logistics teams, with the assistance of a small team of guadua builders who had worked on the program in Washington, D.C., re-mounted in less than two weeks the organically delicate hojamanta tents made of guadua bamboo elegantly joined with steel fittings, which housed the program at the Smithsonian Folklife Festival. Adapted to the industrial setting of the Corferias pavilion, the Colombian public could now experience the cultural journey featured in Washington through the many less familiar regional communities in their own country.

As we entered the exhibition, we were welcomed by a new sign explaining that Colombia had been the guest country at the 2011 Smithsonian Folklife Festival. It continued to describe how the program became a truly collective ambassador for national culture.* The sign continued, "The exhibition offers a different reading of the country and its culture while providing a deeper understanding of its crafts by presenting knowledge and practices in context and in relation to the environment and its resources."** 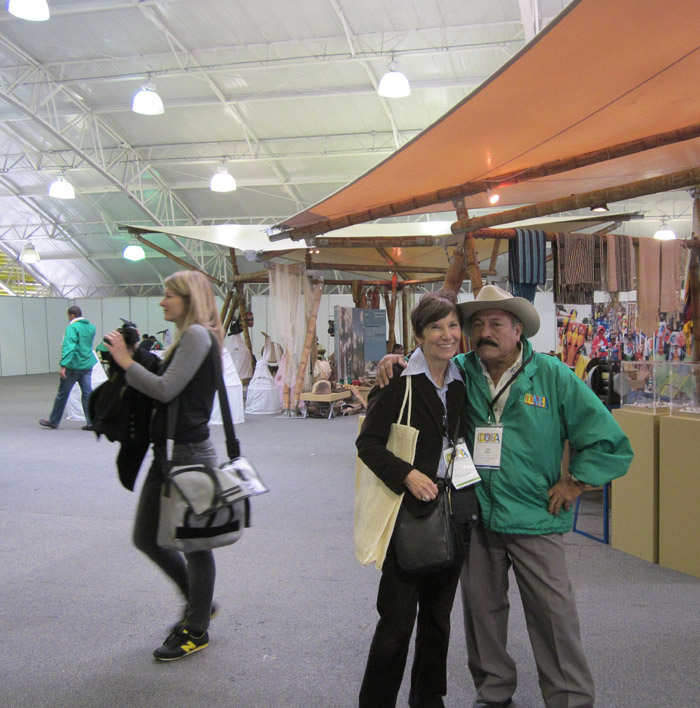 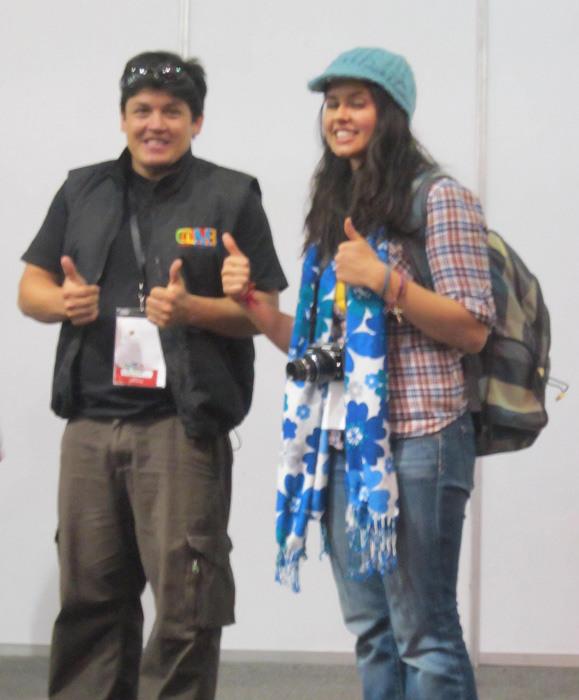 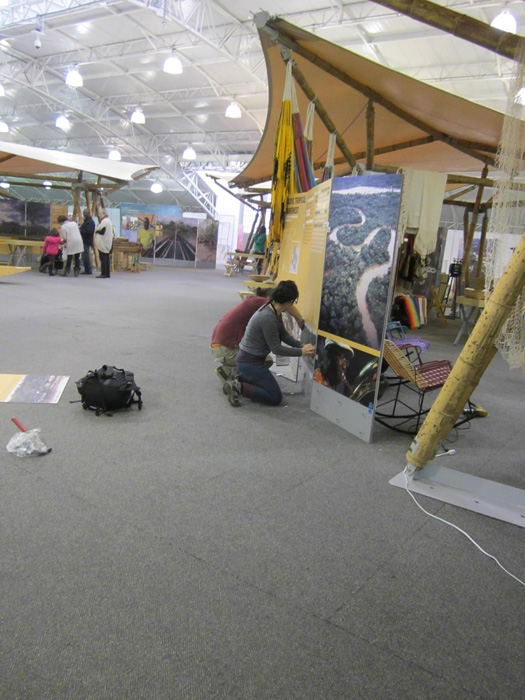 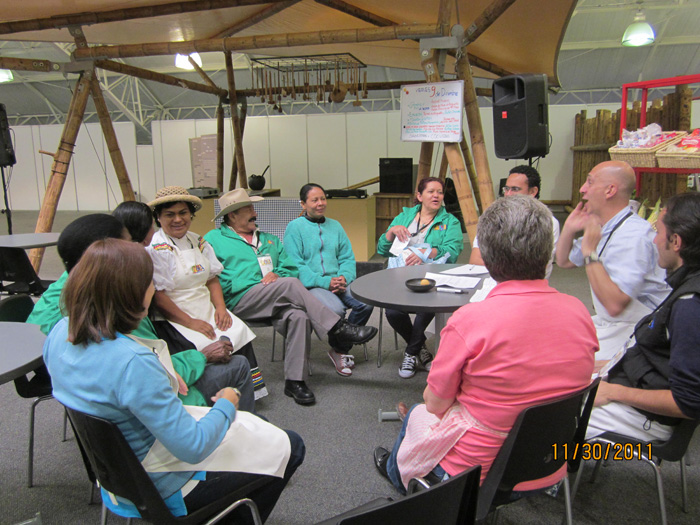 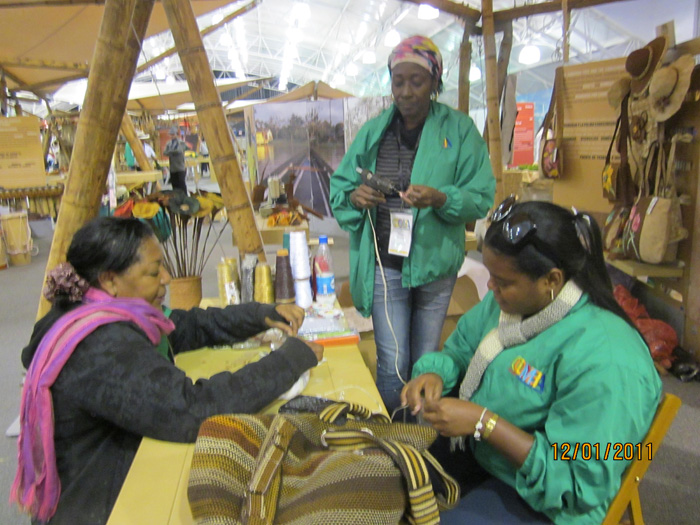 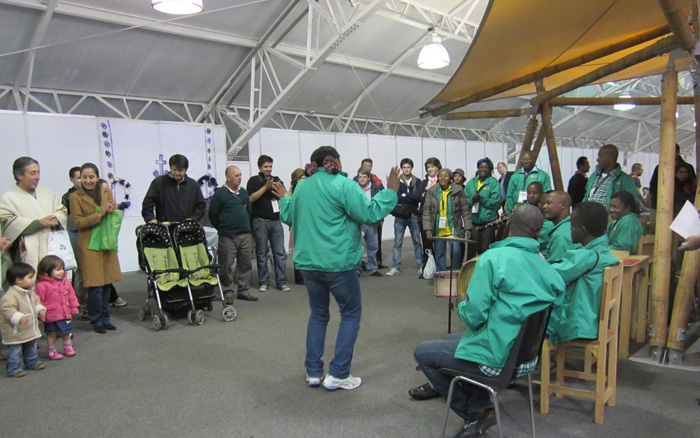 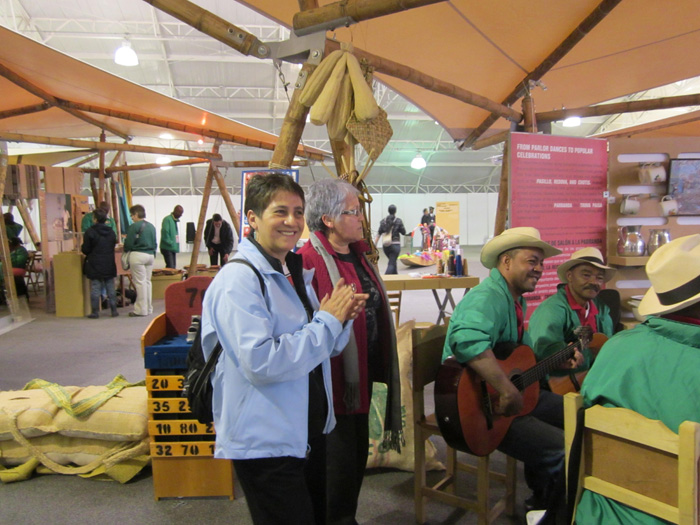 Olivia Cadaval and Joel Pérez Chávez, a cook from the Southeastern Plains region.
Cristina Díaz-Carrera with Rodrigo Viana, one of the builders who helped construct the program structures.
The Colombia team finishes installation of the panels for the exhibition.
Cooks from different ecosystems meet with Ramiro Delgado before the start of the program.
Leonor Palacios watches singer Leonor Murillo and hair-braider Xiomara García make an alligator at her stand, which was part of the Pacific Rainforest installation.
The Chirimía musicians from the Pacific Rainforest learn how to make a washboard from Casimiro Perlaza.
Visitors enjoy jamming at the Tienda Paisa with the Aires del Campo musicians from the Coffee region.

The team wisely replaced the signs damaged on the return trip with full-blown images of the participants performing and demonstrating their skills in Washington, providing a seamless link with the Festival. Over eighty of the 100 participants were able to participate in the exhibition in Bogotá. To replace musicians and artisans who were unable to come, individuals documented during the research phase, or who were part of the family or community of the original participants, were invited. Thus, the number of "collective ambassadors for national culture" continues to grow.

It was very moving for Cristina and me to be reunited with the participants, who welcomed us with open arms. Even though hojamanta tents, sign panels, and installation components helped replicate the presentation at the Smithsonian Folklife Festival, the event setting and public were different. This time, the participants were seasoned presenters and readily took ownership over the exhibition. Their main challenge was to engage the public face-to-face, as they had so successfully done in Washington. In Bogotá, the general public is accustomed to coming to the Expo Artesanías Fair to shop. The other pavilions offered ethnic and traditional crafts, housewares, jewelry, and much more, but when they arrived at the Colombia: The Nature of Culture pavilion, they were met by the ambassadors of culture who engaged them in conversations about their crafts and practices, about their materials, about their region, and about the value of their traditions. It was wonderful to see the friendships that had initially developed in Washington among participants who shared similar traditions as well as those from different ecosystems flourish in the home exhibition, enriching the exchanges.

I asked some of the participants for their impressions of their experience at the Festival in Washington. Two major themes emerged. First, for many, the Folklife Festival had provided them a unique opportunity to learn about the wide diversity of cultures in their own country and, more importantly, to make friends with people from other regions. In fact, they all agreed that they had formed a new family, a family that they could count on at any time. Already they have been advising each other on workshop and marketing strategies. Secondly, they felt that their way of life, their work, and their traditions had been validated by a broad public, but more importantly, that they were recognized as valuable to their own country.

Earlier in the month, a smaller sampling of the Festival was featured in Medellín, and perhaps in the future, the program, or parts of the program, may travel to the different ecosystems that were featured.

Olivia Cadaval curated the 2011 Colombia: The Nature of Culture Festival program. She is curator and chair of the Cultural Research and Education group at the Smithsonian Center for Folklife and Cultural Heritage.