Now several months after the Festival, I’d love to share my recollections. In English and with some Spanish, let’s meander through the cultures of the Colombia that nobody knows, not even the Colombians who live there. This was a grand reality that illustrated many different aspects of its cultural and artistic livelihoods to the North American people with clarity and communion. The festival was a mélange of cultures from six eco systems traversing and enhancing centuries of customs and stories and ways of feeling, expressing, enchanting, and enhancing the Colombian natural resources, with the mind and ability to conform to and reform that world.

Having the fortune to experience the contrast in the variety of life styles and livelihoods was a tremendously unique and enriching opportunity for me. When is this ever possible?  Not even when traveling does one get so many instant contrasts together. It takes days and days of travel by road, boat, or airplane to get to these places and, if you do, you rarely catch the act of making, showing, and talking to the creators as we did. Often you will have a hard time knowing where to go to find the sources. Especially in the vast Amazon region, Leticia, the main port of entry and tourist resort, is far from the heart of the true Amazonian life styles. NO doubt the same goes for the llanero and chocuano stories, dances, and customs. El carretero, el arriero, the carrangueros, the numerous dances performed to tell the stories of Black slavery, of Indian survival, of gaucho traditions of transport and horses, and their contemporary evolutions…(the yipao!), of mythologies and intimacies of distinctly different customs.

Then there were the well rooted manifestations of culinary traditions.... The oven, the open fire, the stove...these hearths are so often taken for granted. I thought the beauty of these intrinsic yet basic necessities again sang to us with delicate flavors, smells, and concoctions. I held the microphone in one hand and the mata frio in the other while we helped the Uitoto women Raquel Andoque and Virgilina Gómez squeeze the juice out of the yuca and dry the paste extracted from the grated yuca to just the right texture to cook on the fire to make the cassava. Cassava is the main staple of the people of the Amazon region...5000 miles of territory...I will now make it here at home in the same way! 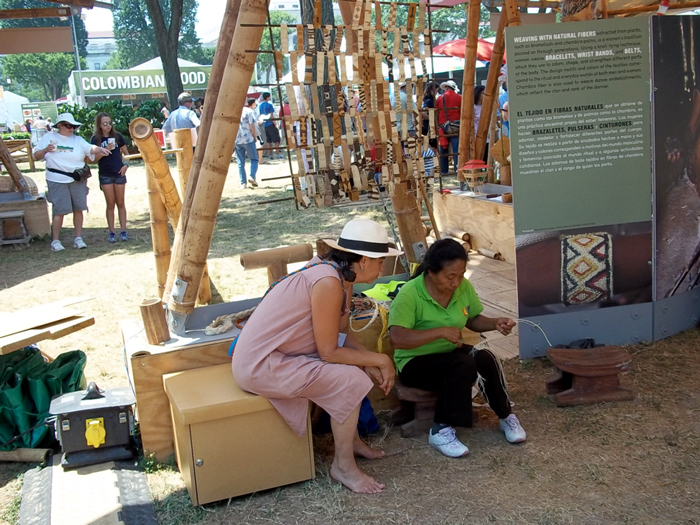 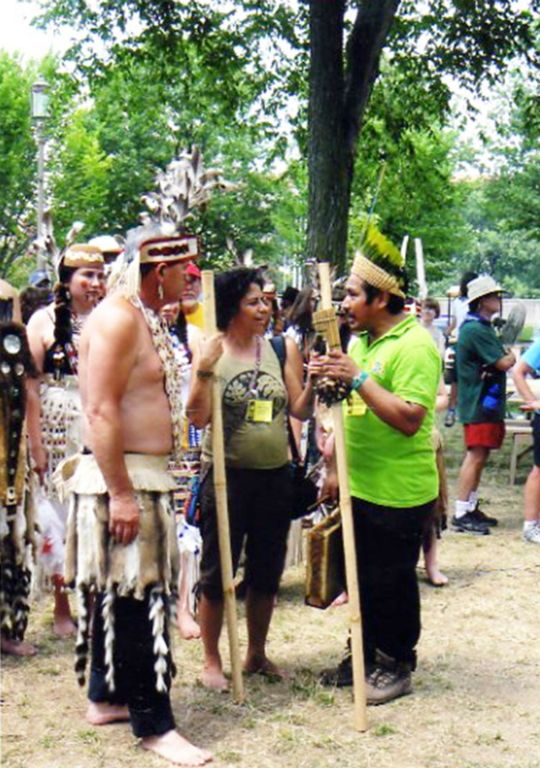 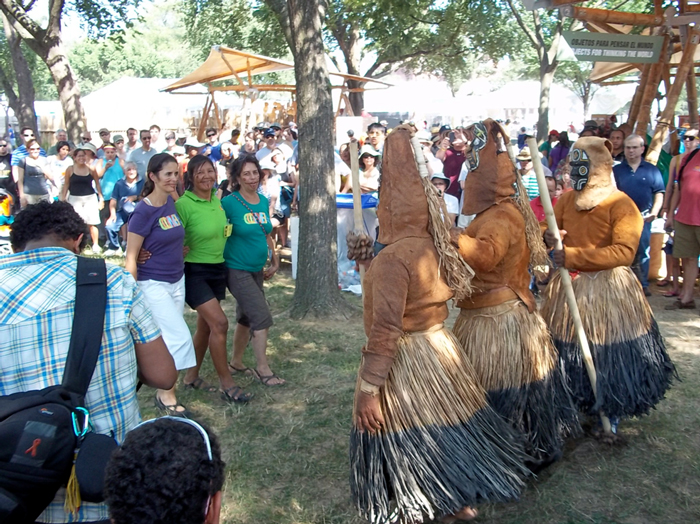 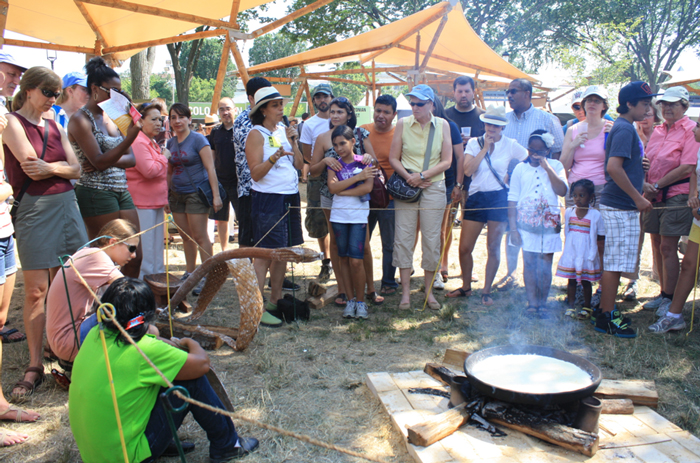 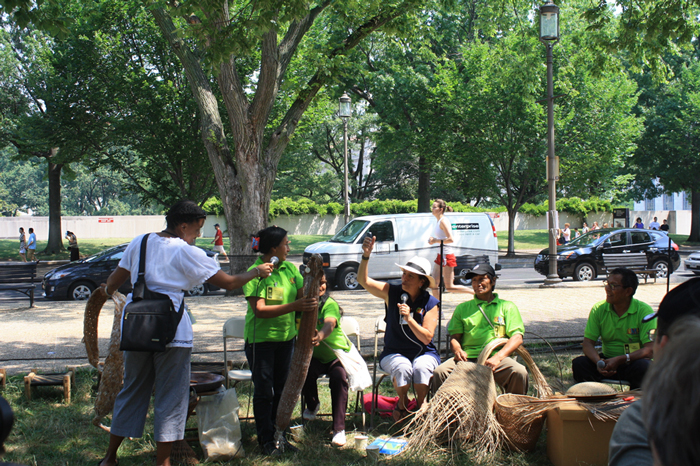 Amazonian weaver Virgilina Gómez explains to Silvia Salgado what fruits they use to dye the fibers different colors.
Photo by Luciano Dionisio
Silvia translates for Uldarico Matapí Yucuna and Bud Lane, the Siletz dance leader from Oregon, during the visit of the Siletz group to the Amazonian ecosystem at the Festival. Grateful for the time and the perfect opportunity to share, there is an exchange of gifts, the the Siletz dance leader’s drum from the Oregon group and a “thinking stool” from the people of the Colombian Amazons.
Photo by Emily Socolov
In the chontaduro dance, Yvonne Valencia, Yaneth Tanimuka, and Silvia dance with three participants from the Colombian Amazons dressed in simbolic dance costumes.
Photo by Luciano Dionisio
María Rosa Yucuna de Valencia prepares casave while Silvia Salgado describes the process.
Photo by Yvonne Valencia
Silvia Salgado leads the discussion as María Rosa Yucuna de Valencia, Virgilia Gómez, Abel Rodríguez, and Oliverio Rodríguez Muinane talk about the utensils needed to make casave. Michelle Banks handles the microphone.
Photo by Ivonne Valencia

Some highlights for me:

At the Tukupi Cooking Presentation
I appreciated gaining the confidence and trust of the Uitoto malokera Raquel Andoque, who told the myth of how the yuca came down to grow the way it does on land from small bushes (not tall trees) so that we can eat it easily, and how the gods gave us the secret of how to cook it to expel the poison from the yuca brava. This jewel of a story is a legacy to be guarded and protected. She described how the bushes sprang after the floods came and tore the trees down. She relayed how they knew the yuca was poison because animals ate it and fell into a deep slumber. This was a very special moment.

Making Cassava
One afternoon two interpreters, Daniela Rodríguez and I, decided to present the cooking of the cassava and this enabled us to include a better demonstration of the ways of squeezing the yuca juice out of the grated yuca paste. This activity is a very integral part of the making of the cassava and getting just the right dryness point is critical. We showed two different types of squeezers from two different Amazon tribes, the snakelike mata frio made from palm frond, and the flat larger weave made from kumara. Unfortunately, by the end of the festival the snakelike mata frio had been lost – perhaps too beautiful to resist.

The Meeting of Two Indigenous Cultures for a Dance
One morning the indigenous Amazonians went to the National Museum of the American Indian, where they met a group of Siletz Indians from Oregon, who were performers of their ritual dances. One our volunteers invited them to come and formally dance for us at the Festival. What resulted was a wonderful meeting of native cultures for an exchange of ritual dances and gifts; a “thinking stool” from the Amazon and a square drum from the Siletz. This was a very spontaneous moment and important as a symbolic exchange. While there wasn’t time for a lot of interaction, the performance was a special dialogue in itself. It was a magical meeting.

“Nos contaron los abuelos”
Here on this narrative stage, there were several wonderful meetings of the minds and hearts of many. I was surprised at the number of people who attended the presentations. The most special for me was the one where the indigenous women spoke of their role and function as midwifes and mothers. They described how they go off alone to an area 500 yards away from the maloca to have their babies, generally on their own. They stay away from the home for five days while their system readjusts and the baby becomes stronger. When they return they are given a special Tukupí preparation with hot pepper to clean the baby’s mouth and entire esophagus to aid proper digestion. The birthing mortality rate in these communities is very low. If the shaman detects a problem early on he will take the woman to a health center. As there were many related areas to talk about in this session, the discussion was continued the next day (led by Emily Socolov).

The recycling discussion held with the Bogotá recycler Hernando Ruiz, Tinjacá tagua craftsman Juan César Bonilla, and a Peace Corp worker who has also been doing many recycling building projects in Central America was an amazing sharing of "saberes" and long time experience. Here the visions of the urban, the urban contemporary ingenious recycler, and the artisan sensibility of reusing his own left over material blending so well with the organizer of recycling projects to benefit under privileged communities in search of  alternative creativity and sustainable lifestyles made a very keen natural fusion.

Another highlight for me was the bringing together of Daniel Matapí  Yucuna and Oliverio Rodríguez  Muinane, his “grandfather,” as he calls him, to talk about fishing techniques and stories from their different perspectives. Daniel was very respectful of Oliverio’s knowledge and his rhythm of language and memory. Oliverio provided a slow and deliberate retelling of the myths behind how he learned to fish, and these presented a contrast to the myth that Daniel told to explain how the fishes came to be.

Silvia Serrano received her master’s degree from Pennsylvania State University. Her thesis analyzed carranguera music lyrics as a space of cultural resistance over the traditional representations of campesinos from the Cundiboyancense highlands. She served as a presenter and interpreter at the 2011 Folklife Festival Colombia program.