Reflections on the Colombia Program of the 2011 Smithsonian Folklife Festival

The Colombia program for the 2011 Smithsonian Folklife Festival was an incredible and dynamic success. By dividing the country into six ecosystems, the program made an important and interesting connection between people and their environments. Because the public may not have known a lot about Colombia, providing this backdrop served to bridge an understanding about communities and eco systems that people from rural areas, whether they are in the U.S or Colombia, could understand and relate to.

The participants were amazing liaisons in disseminating information about their cultural forms. If there was one element I would do differently, it would be to encourage more fully the exchange of ideas between the participants of the Colombia program not just with each other, but also with participants in the other programs during the actual festival days. Creating time for and encouraging participants to leave their areas and relate and socialize with other participants would facilitate a more egalitarian approach to the festival, and generally continue to promote a festival atmosphere of learning not just for the public, but also for the participants.

Overall, the program was amazing, beautiful, and productive. 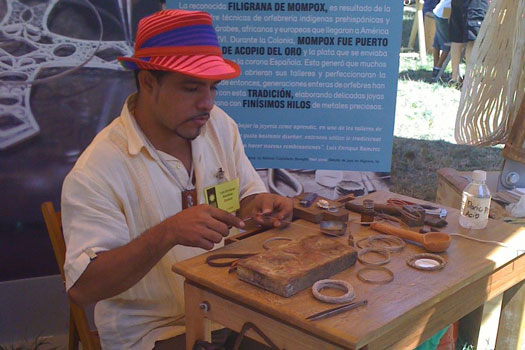 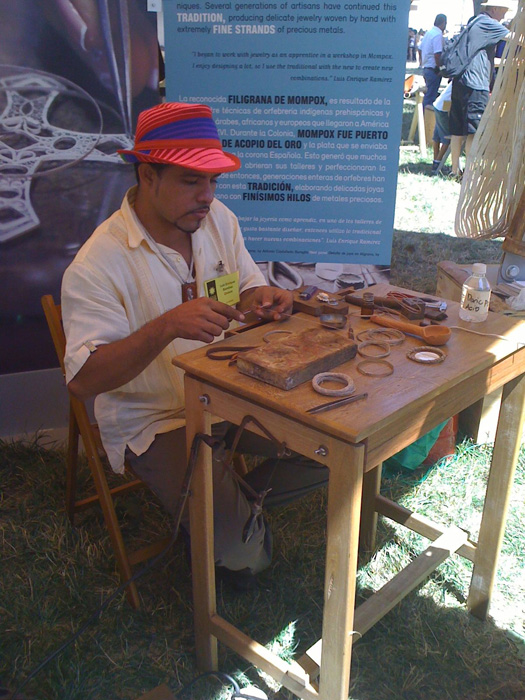 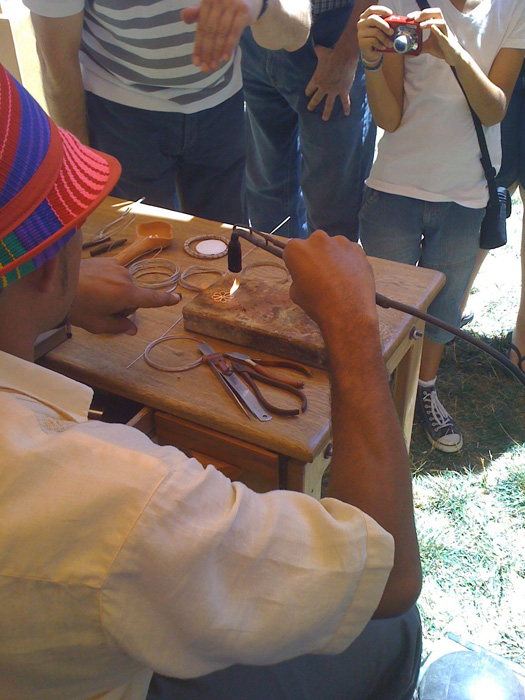 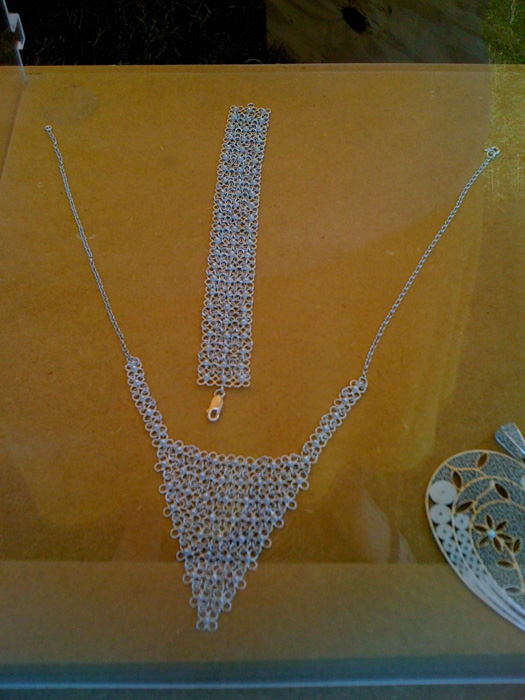 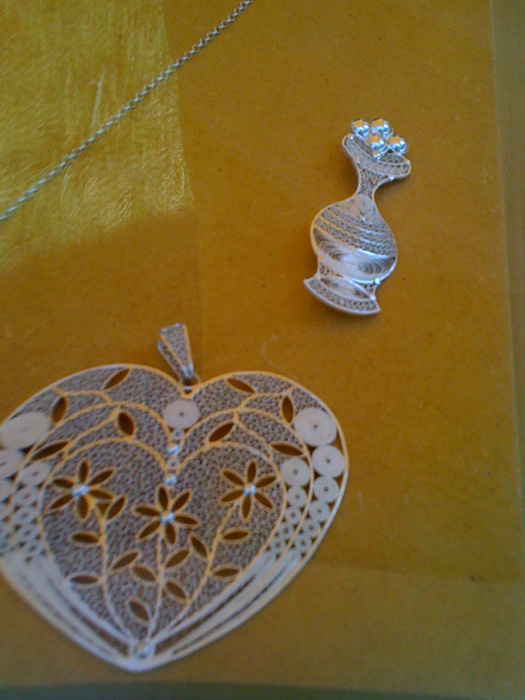 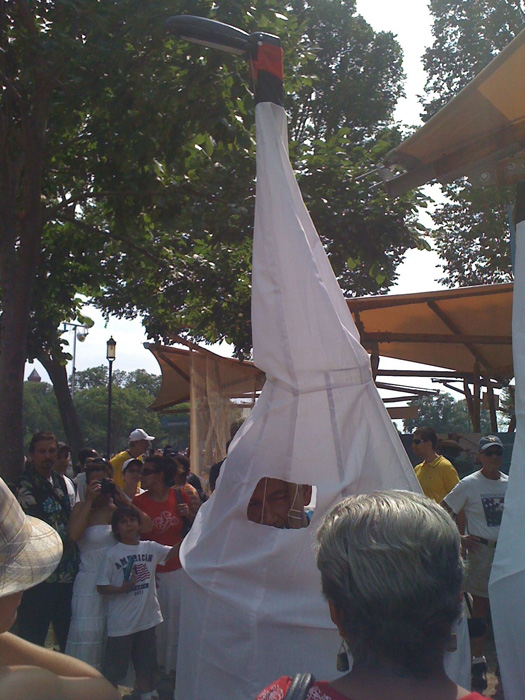 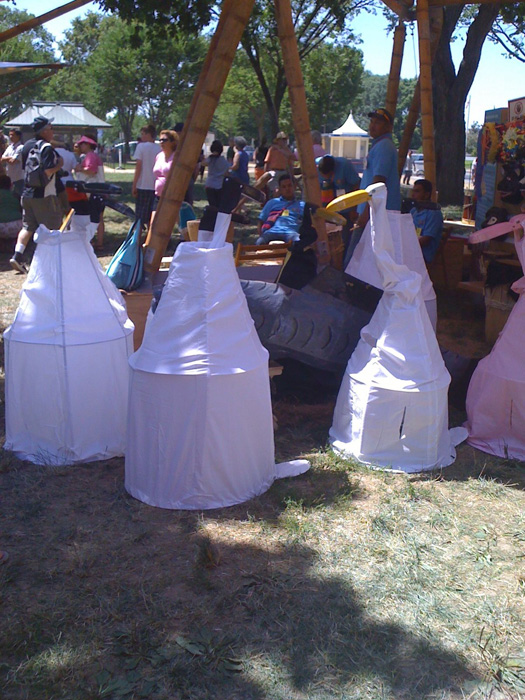 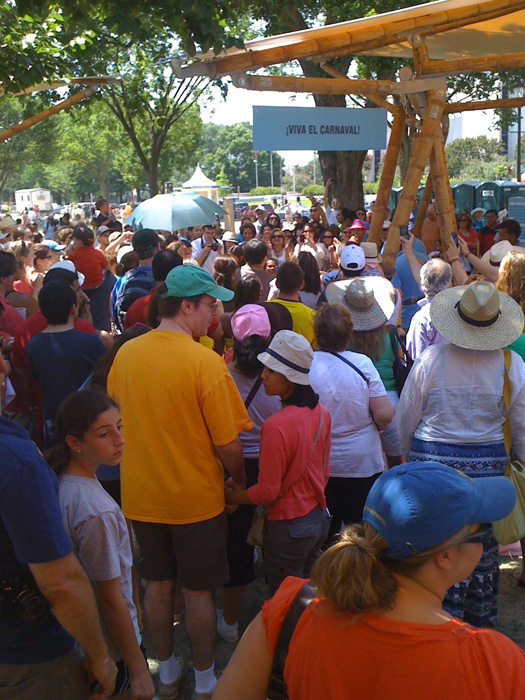 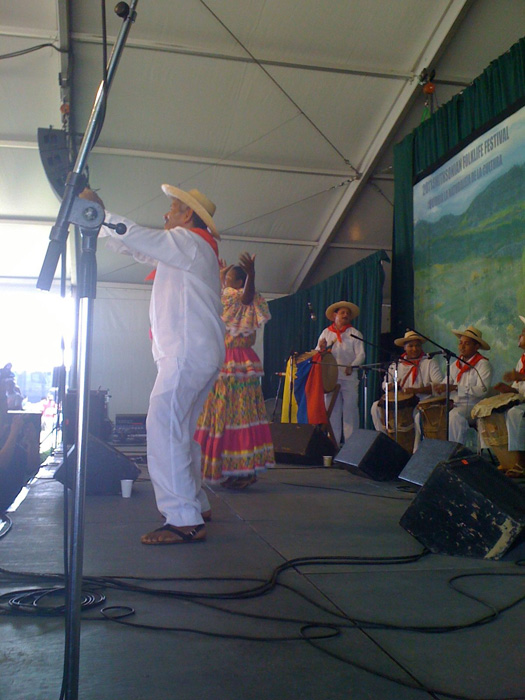 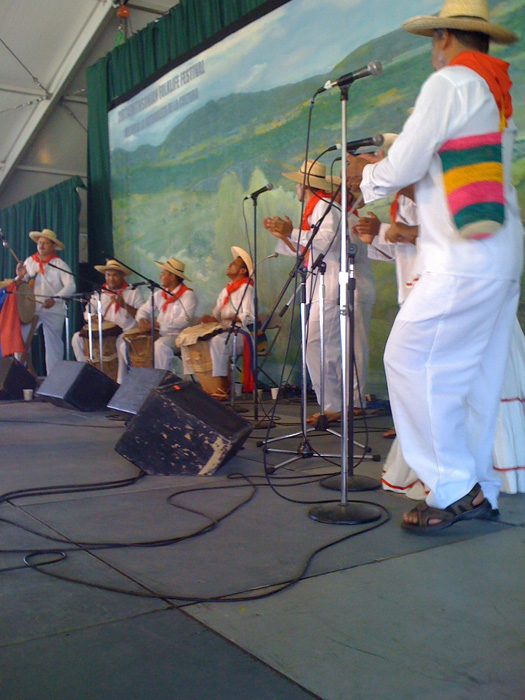 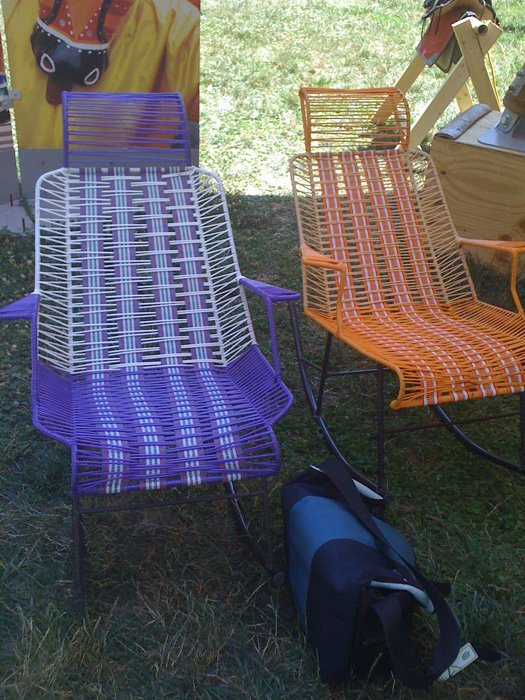 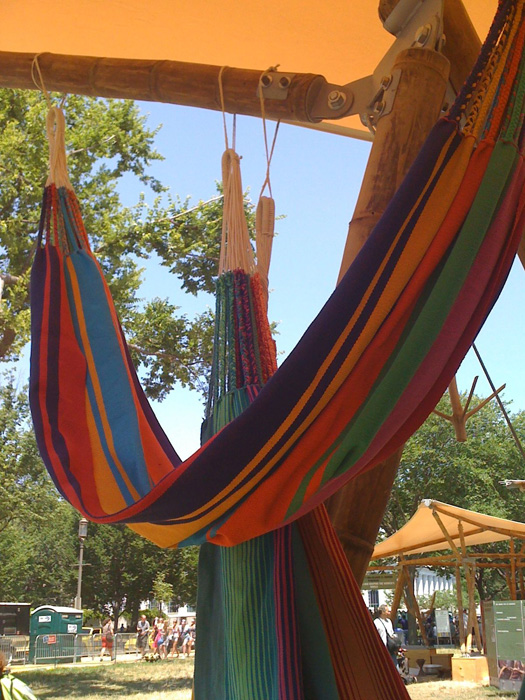 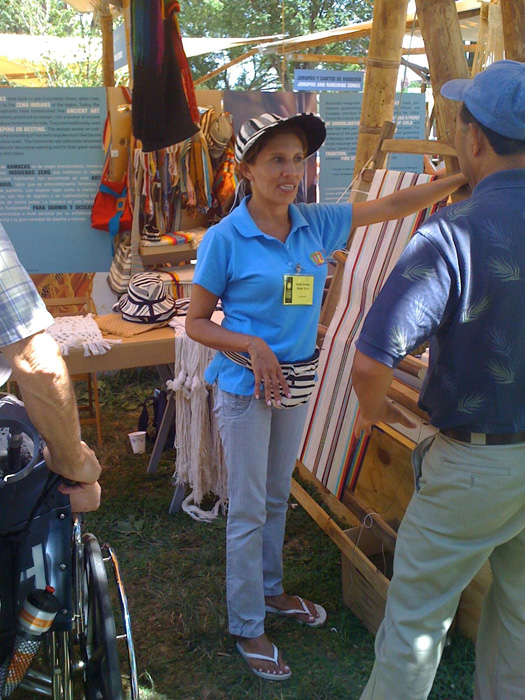 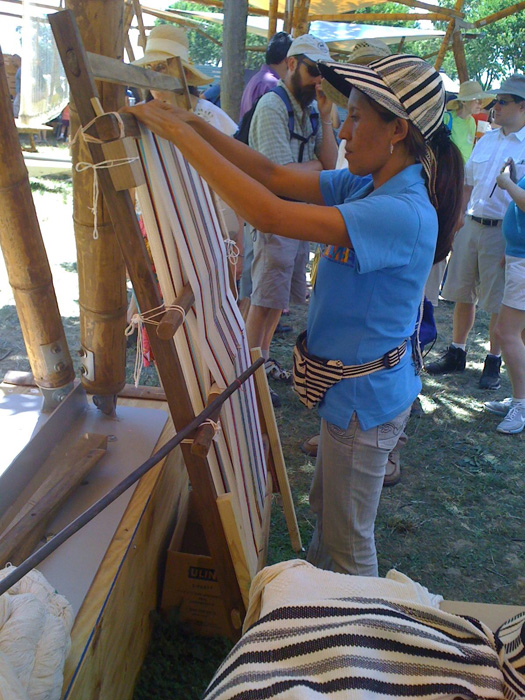 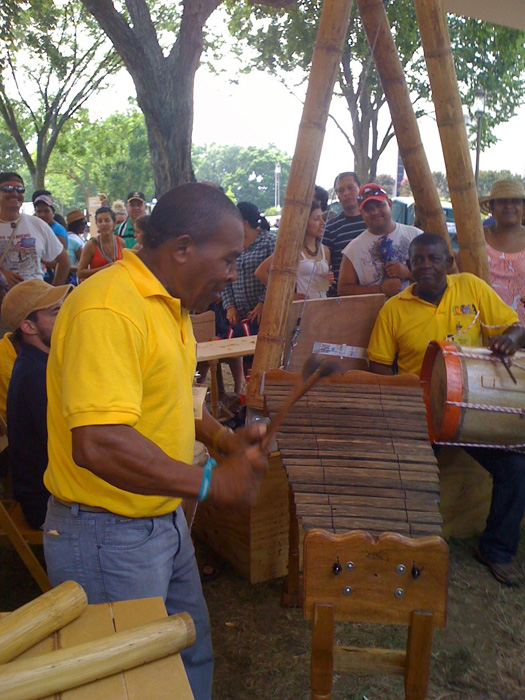 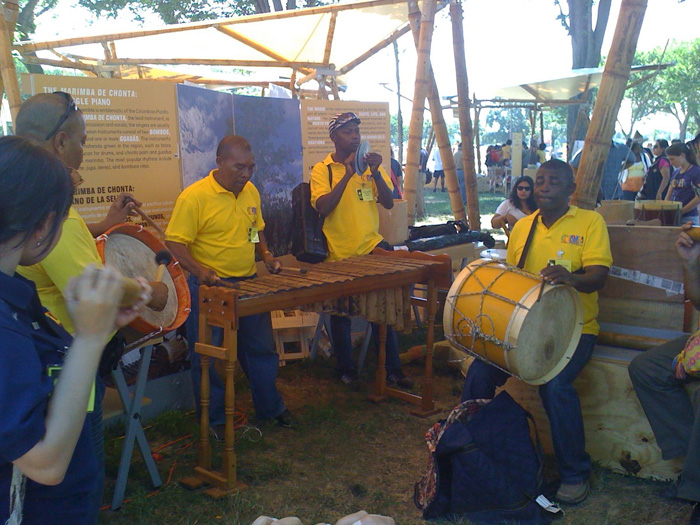 Luis Enrique Ramírez Orozco of the Mompox region demonstrates some of the techniques for making filigree jewelry.
Photo by Paulina Guerrero
Luis uses a foot-powered torch and very basic tools to configure and shape the extremely detailed work of the filigree jewelery.
Photo by Paulina Guerrero
Examples of the filigree silversmith work of Luis Enrique Ramírez Orozco.
Photo by Paulina Guerrero
Examples of the filigree silversmith work of Luis Enrique Ramírez Orozco.
Photo by Paulina Guerrero
Samuel Mármol Villa, director of Don Abundio y sus Traviesos, in a festival costume about aves, or birds. The costumes make a rhythmic percussive sound to accompany the dancing and tell a story of different birds in Colombia, a fish, and a hunter.
Photo by Paulina Guerrero
The aves (birds) are taking a break from a long day at the festival.
Photo by Paulina Guerrero
Festival visitors listen to carnival music of Mompox. Most likely they are hearing an incredible jam session with Don Abundio y sus Traviesos.
Don Abundio y sus Travesios perform caribe colombiano, a distinctive African-infused sound that had everyone up and dancing whether they knew the steps or not.
From a performance by Don Abundio y sus Travesios
A common site in the Mompox region: rocking chairs in front of most houses enable residents to relax, people watch, and enjoy the evening.
A beautiful hand-made hammock from the Mompox region
Hammock maker and textile weaver Anilis Meza Tous talks with the public about her work.
Anilis Meza Tous demonstrates how she makes a hammock on a vertical loom. This is different from the more common horizontal loom where the weaver works from a seated position. Ani weaves everything using her hands and a long wooden shuttle. One large hammock can take five to nine days to complete.
Baudilio Guama Rentería, an instrument maker and musician, demonstrates the marimba de chonta of the Pacific Tropical Rainforest, which is also known as “the piano of the jungle.” African rhythms are interspersed with indigenous ones to create a music that has infectious grooves.
Baudilio Guama Rentería is joined by members of Chirimía La Contundencia for an impromptu jam.

Paulina Guerrero, a folklorist and filmmaker, served as a presenter and interpreter at the 2011 Festival. Originally from Washington D.C. , she is currently pursuing her doctoral studies at Indiana University. She plans to continue her interests in cultural sustainability issues, and she recently completed her first short documentary film.